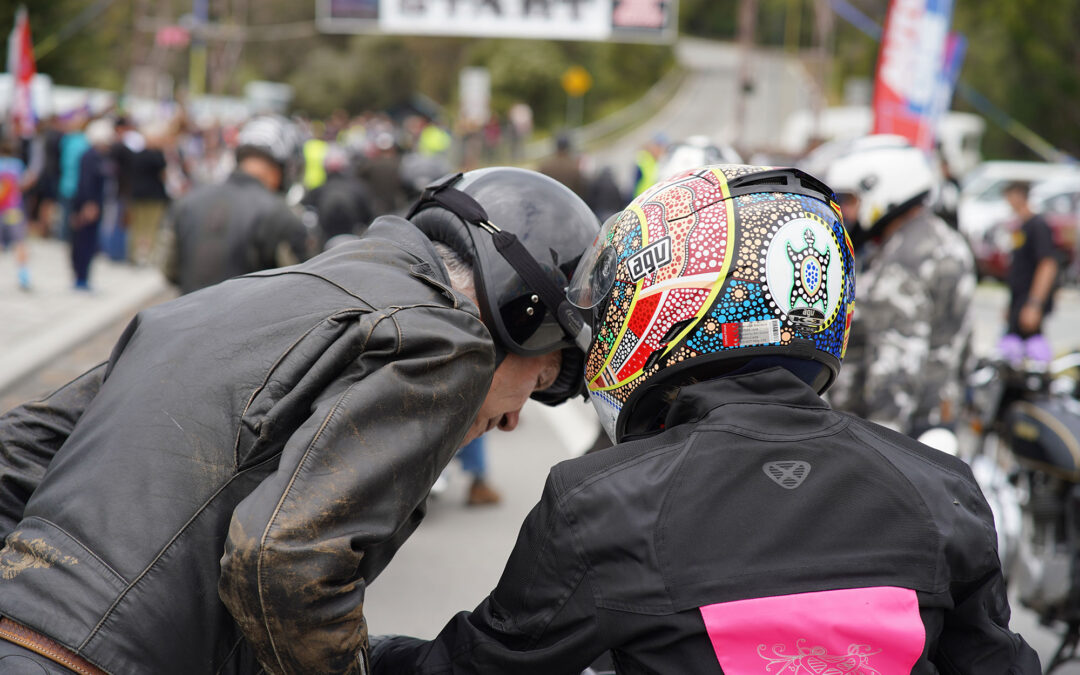 The Albany Vintage and Classic Motorcycle Club have staged another fabulous event.

When my wife began looking for a classic motorcycle to replace her SR 500 Yamaha she had a couple of criteria.  It had to be eligible for classic hill climb competition and, importantly, it had to have an electric start.  The SR was fine in the former category but with no electric leg it proved to be difficult for her to start so we ended up moving it on and purchasing her a 1987 GB 500 Honda.  This machine uses the XR engine so it’s virtually indestructible and it starts at the press of a button.  Catherine was all set, except the first event was destined to rain on her parade, both literally and metaphorically. 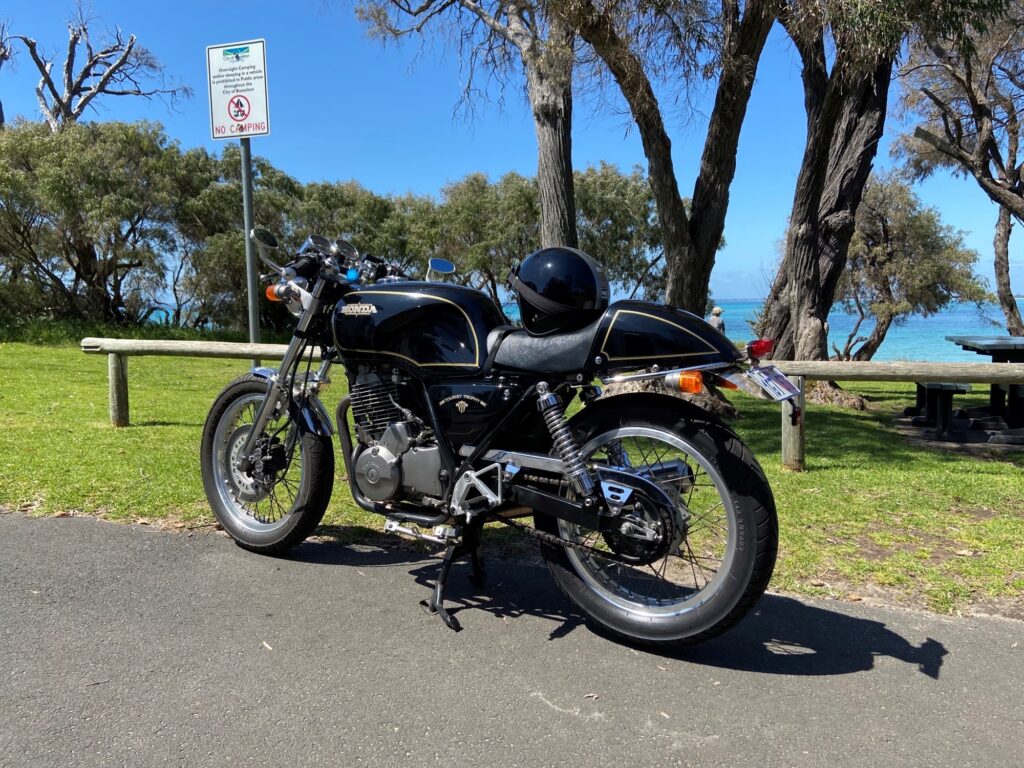 The little GB 500 is a tidy machine and starts at the press of a button, but, sadly, too new to compete in the Albany Hill Climb.

When it came time to fill in the entry form for the Albany Vintage Motorcycle Hill Climb, it became apparent the cut-off was 1980.  Anything made after that year was out.  Being made in ’79 the little SR would have been allowed, indeed, we had entered it in 2019, but the Honda was definitely excluded.  With the SR off enjoying life with a new owner, I suggested Catherine compete on the Thunderbird.  It was not entirely alien to her, she had ridden the bike and was, by all accounts, competent on the strikingly beautiful motorcycle.  She wasn’t happy but agreed I should fill in the application with her on the ‘Bird.

Catherine happy at last to be on our strikingly beautiful Triumph Thunderbird.

2019 had not been a good year for us at the Albany Hillclimb.  We couldn’t get the SR to run properly so it was loaded onto the trailer without firing a shot in anger.  I on the other hand, did get a run at the hill.  I was on my Triumph Triton which has a one down/three up gear-change patter.  The Vincent, on which I had been spending most of my time lading up to the event, is one up/three down.  On the first go up the hill on the Triton, instead of changing up (like a Triumph should), I changed down – like a Vincent does.  The result was a destroyed gearbox. 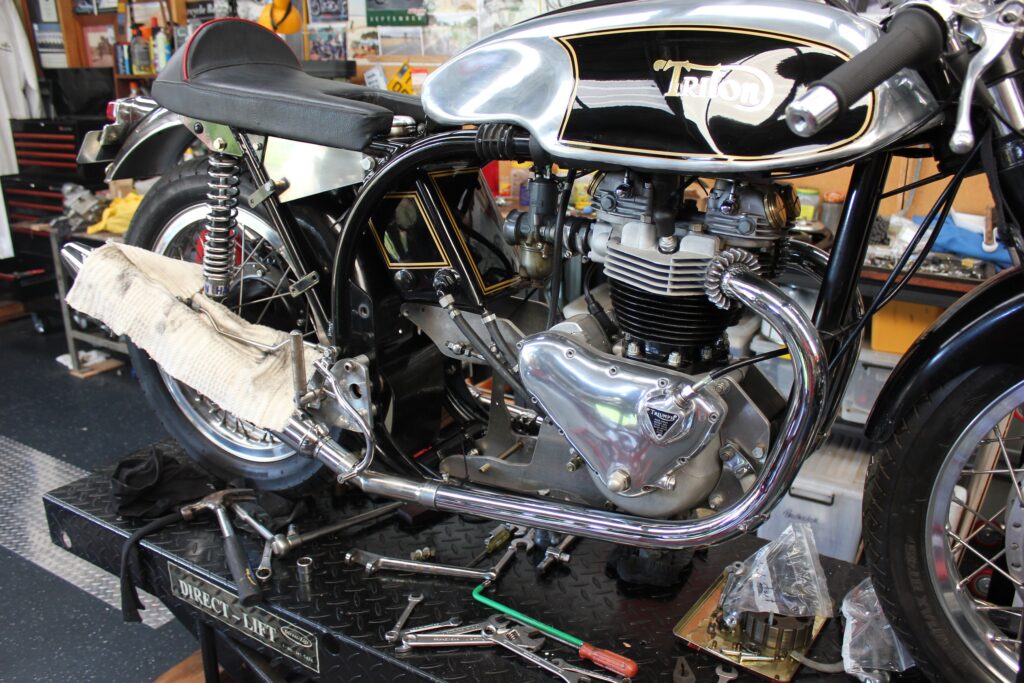 The gearbox in the Triton required a full rebuild thanks to some errant shifting on my behalf in the 2019 event.

Back to this year.  By the time the hill climb weekend came around, Catherine hadn’t even sat on the Thunderbird and it had been perhaps two years since she had ridden it.  She had barely ridden her ‘new’ Honda but she assured me she would get some practise on the hill at Albany the day before the event.  We drove the 400 kilometres to Albany in beautiful, warm weather and arrived in the seaside town on the Western Australia South coast in the late afternoon.  We unloaded the Thunderbird and the Vincent and started them briefly before making them secure for the night (I do this with a few reassuring words).

We were staying at Middleton Beach, near the base of hill climb circuit, so on Saturday morning I opted to take Catherine up the hill on the way to the show and shine event in the Albany CBD.  I took off up the hill like a scalded cat and pulled in at the top to wait for the wife.  And waited … and waited.  Eventually she came puttering up the hill at a snail pace.  The Thunderbird was clearly a bit crook but we made it into town.  Getting off the Triumph Catherine said, ‘this thing handles like a bag of spuds.’  Make of that what you will but, sure, it’s not as svelte and tight as the little GB which it gave 30-something years away to, but at least by that time the engine was running a bit better.  It may have been stale fuel or a blockage but after I topped the tank up with some clean, new petrol the ‘Bird ran sweet.  The Thunderbird really has a lovely engine.  Everything else in the shed seems angry by comparison. 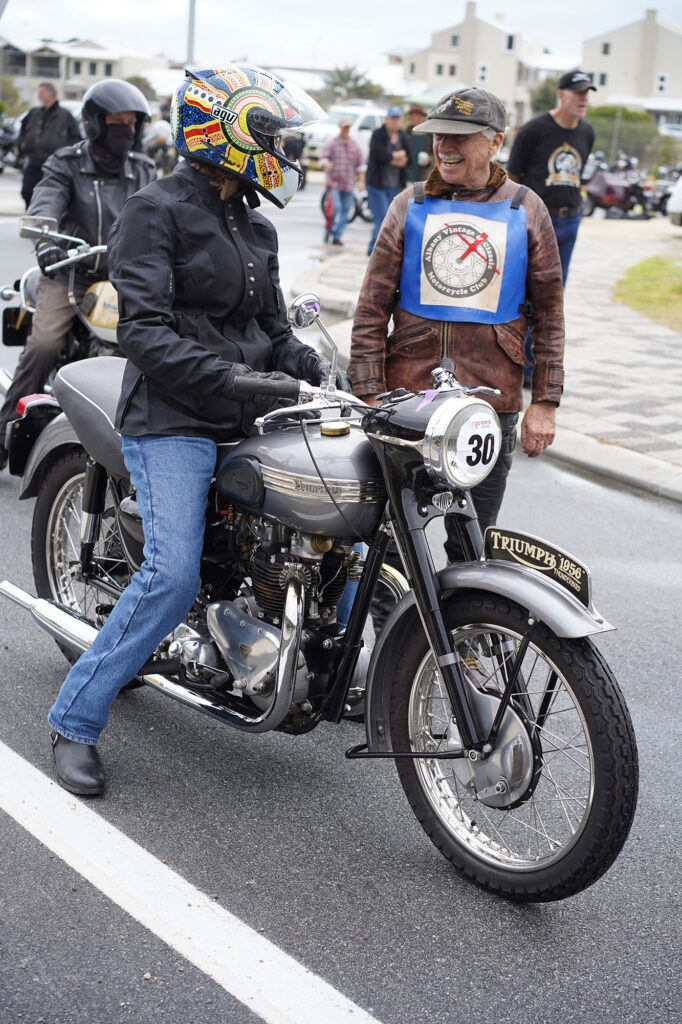 After a couple of hours Catherine was completely at ease with competing on the Thunderbird. Here she gets some reassuring words of wisdom from WA and UK speedway Ace Rod Chessell. Photo by John McKinnon.

By the end of Saturday morning, having received so many compliments for her choice of machine, Catherine was beginning to feel quite chuffed about being on the Triumph.  Granted, I had to kick it every time she needed to get the engine running and, granted, the brakes are merely suggestions for washing off speed, but Catherine soon reacquainted herself with the bike and even managed to get it up the hill in a reasonable time.  After the practise runs, and satisfied she knew what she was doing, Catherine and I retired to a bar from which I could drink beer and feast my eyes on two of the most handsome machines in all of motorcycledom.   All in all, our Saturday was most enjoyable.  The Vincent, the Triumph, the wife and I were in Albany – and we meant business.   That night it rained. 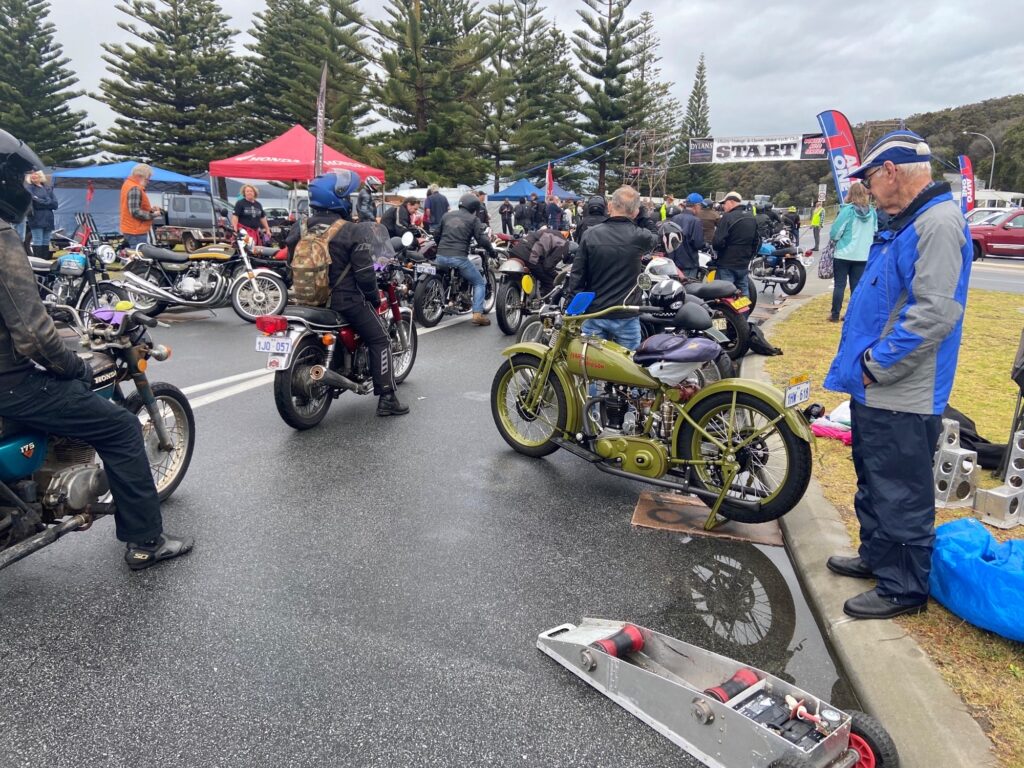 Our first couple of runs on the hill were on a wet track, however, by mid-morning the roads were dry and our speeds lifted – which doesn’t help where you’re running for consistency.

I woke at 4.00 am with the rain tumbling down and lay there listening to it as night gave way to a murky, grey loom.  This is not surprising.  In the local, Nyungar, dialect, Albany means ‘Place of Rain.’  Tourist brouchures promote the area as the “Rainbow Coast” and with an average of 177 rainy days per year we didn’t stand a chance.  We trundled off down wet streets spraying my hitherto gleaming alloy engines with a fine mist of pure rain-water and road grime.  I was feeling pretty glum as I was sure the event would be cancelled, but no, we would ride: rain, hail or shine.  Gentlemen, start your engines.  And, in my case, start your wife’s engine too.

We had two runs up the hill to set what would be our nominated time.  The aim of the event was then to do three runs up the hill all at the same speed as the elected time, with points lost for going over or under the nominated time.  Catherine picked 76 seconds and I picked 48 seconds.  Our two dial-in runs were made on wet roads but by the time we lined up for our timed runs, the rain had stopped and the roads were drying out.

The Albany Vintage Motorcycle Club go to great lengths to host their signature hillclimb event.  Injuries, crashing and irresponsible behaviour would jeopardise the future running of the event so it came as some relief as the weather turned for the best.  It also meant I could give my 1000 cc v-twin a bit more of a handful going up the hill.

To say the Vinnie is loud would be an understatement.  Being lined up together was both comforting and burdensome for my wife.  She knew she had nothing to prove but she wanted to get away cleanly.  The only way should could do this was to allow a second or for me to get away and so she could hear the tone of the Triumph and set about getting it off the line, which she did quite nicely on all three runs, pegging the little 650 to the stop in the first couple of gears she managed to come within .6 of a second on all three runs, however, they were all three seconds below her nominated time.  My spread was over 2.5 seconds and two below my nominated time, so I was well out of the running.  That said, I had a blast taking the big twin by the hill at full tilt.  Best of all, no motorcycles were harmed in the making of these times. 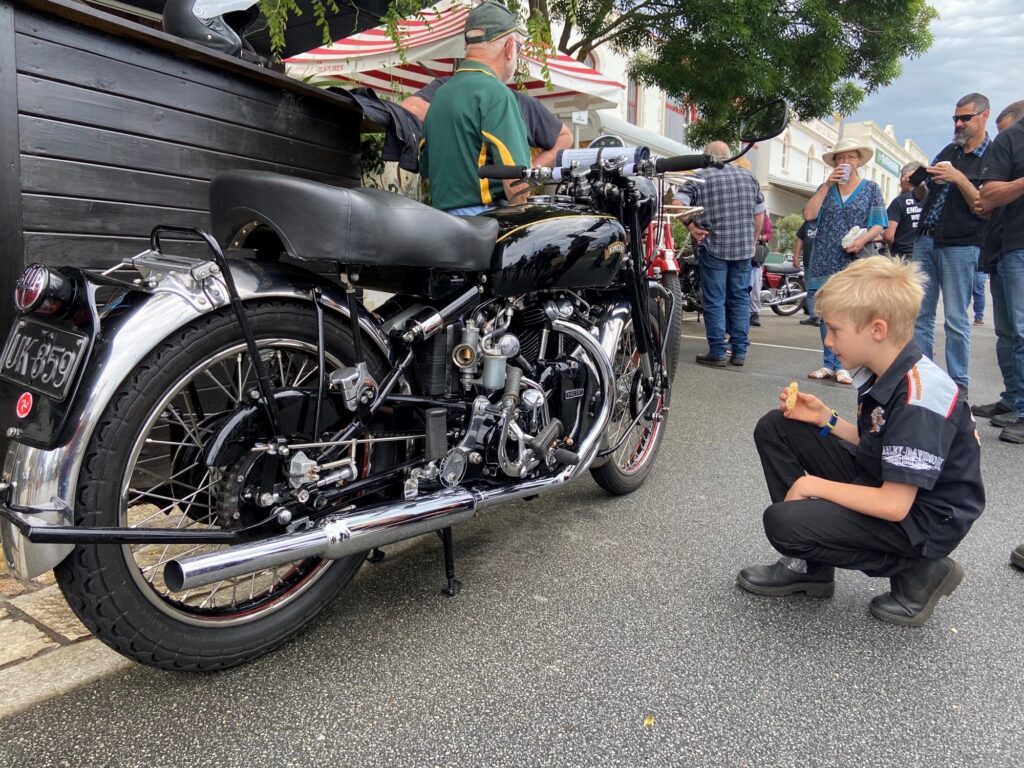 This young man was obviously taken with the stunning beauty of the Vincent Black Shadow. 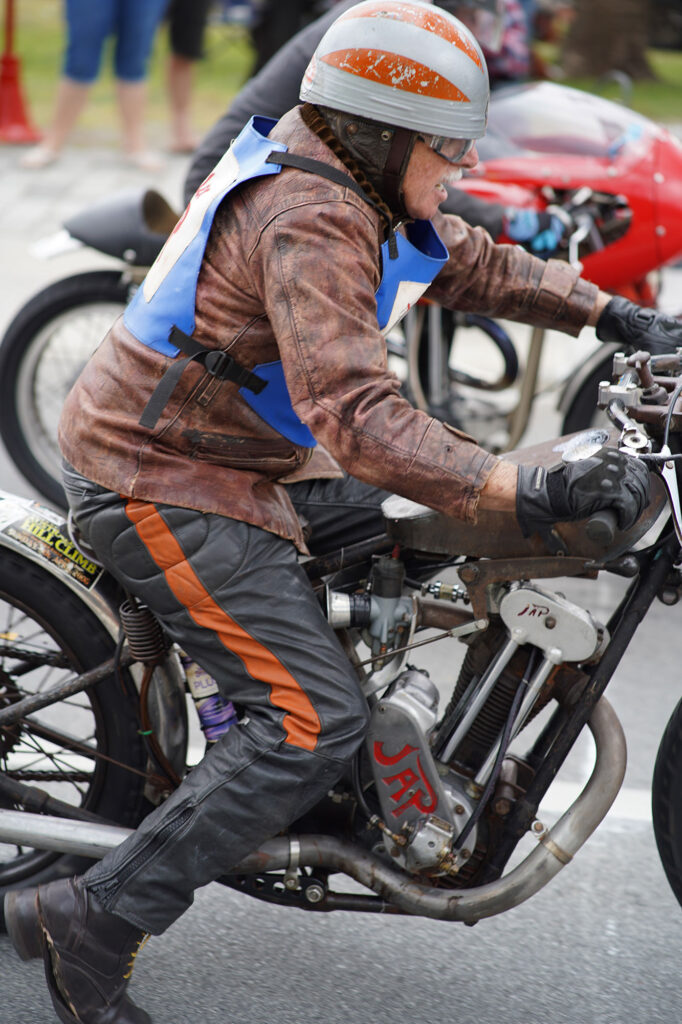 They don’t call him “Rocket Rod” for nothing. Rod Chessell powers from the line on the JAP special alongside his former speedway adversary Bob O’Leary. Two legends of the sport. Photo by John McKinnon. 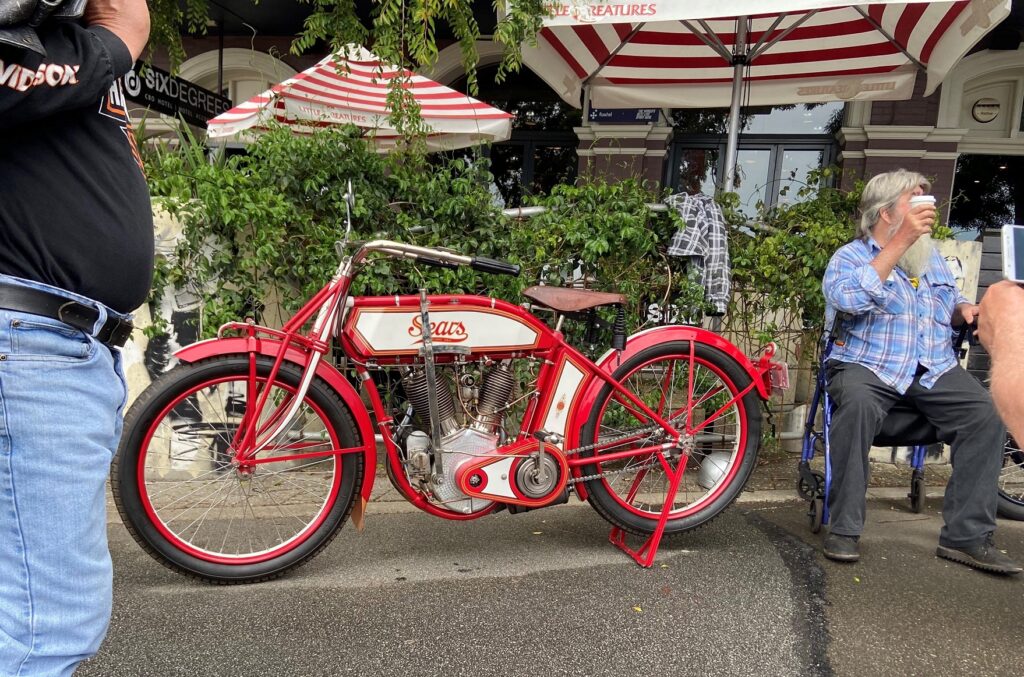 Bob Wittingstall’s stunning 1913 Sears on display at the Show and Shine, being guarded by his friend Kelvin. 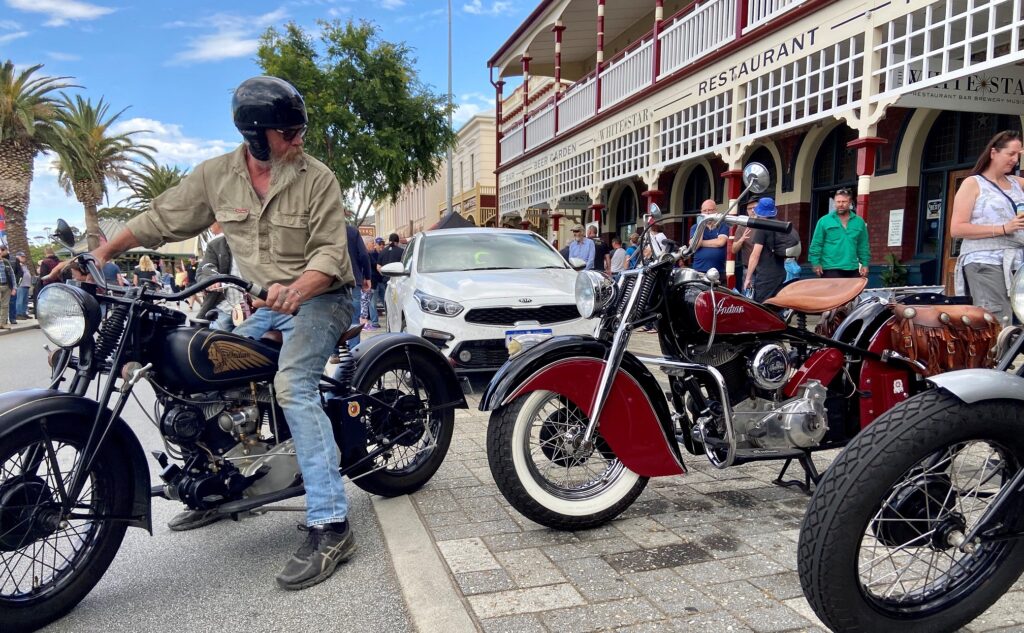 Not quite the Battle of the Little Bighorn but Indians were prominent at Saturday’s Show and Shine and in the hill climb on Sunday. 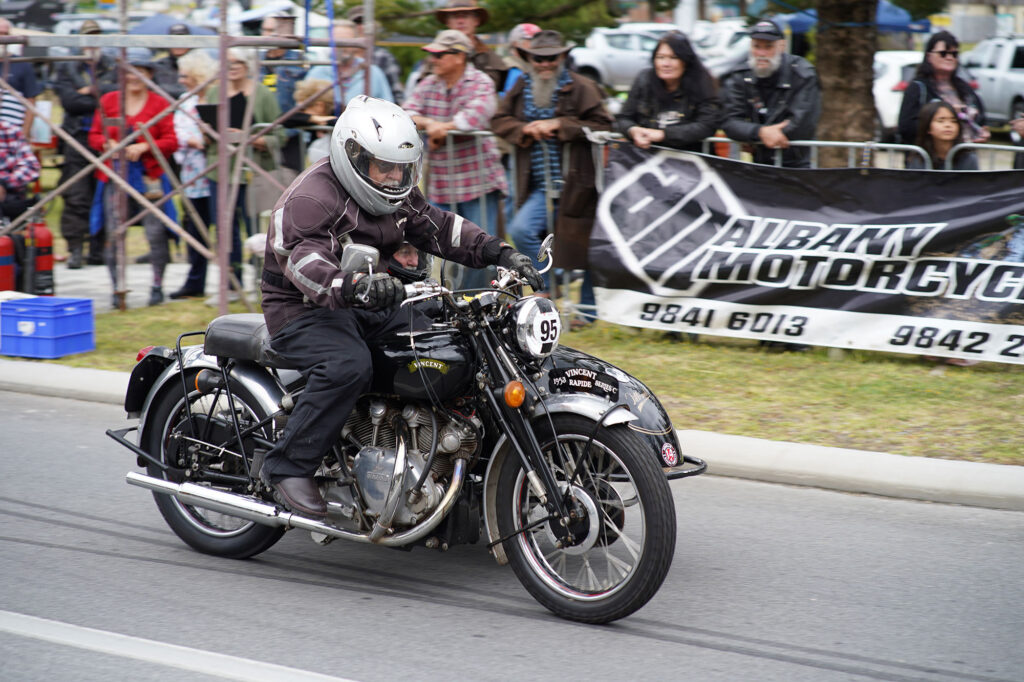 Brian Cartwright on his ’53 Vincent sidecar. 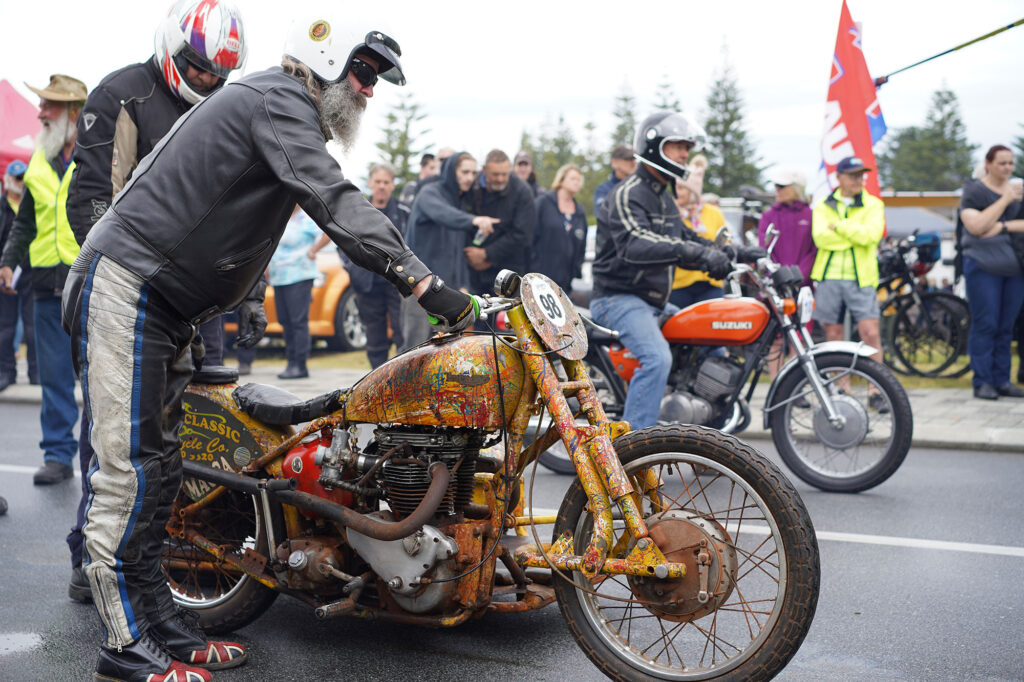 Murray with his 1950 pre-unit Triumph outfit. Photo by John McKinnon. 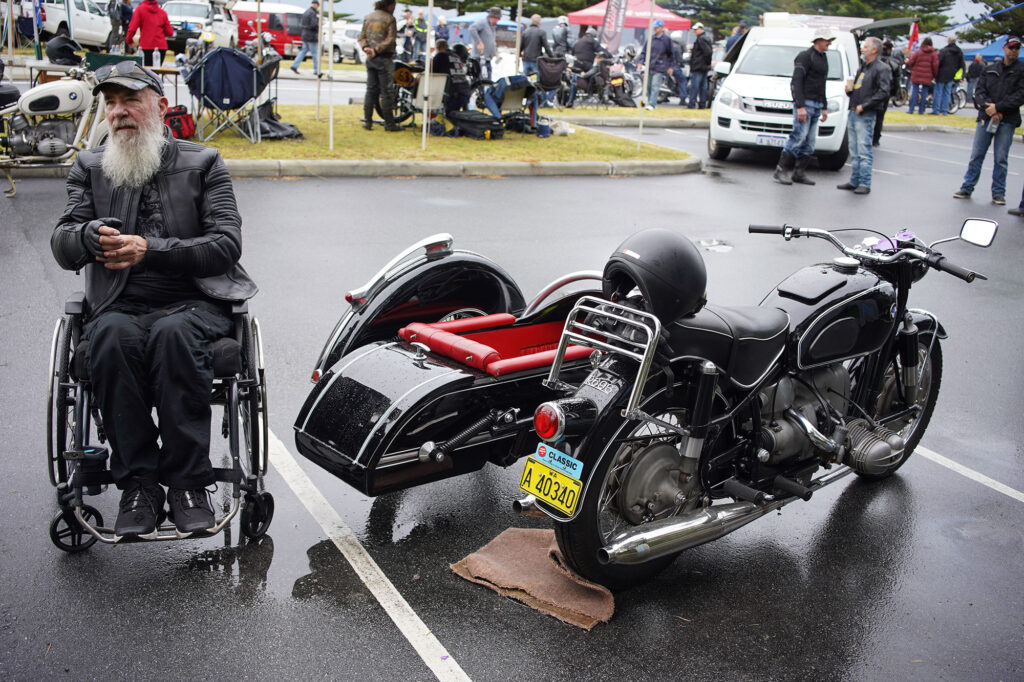 Bob Rees was back in the saddle after suffering a motorcycle crash in Africa last year that left him with critical injuries. Photo by John McKinnon. 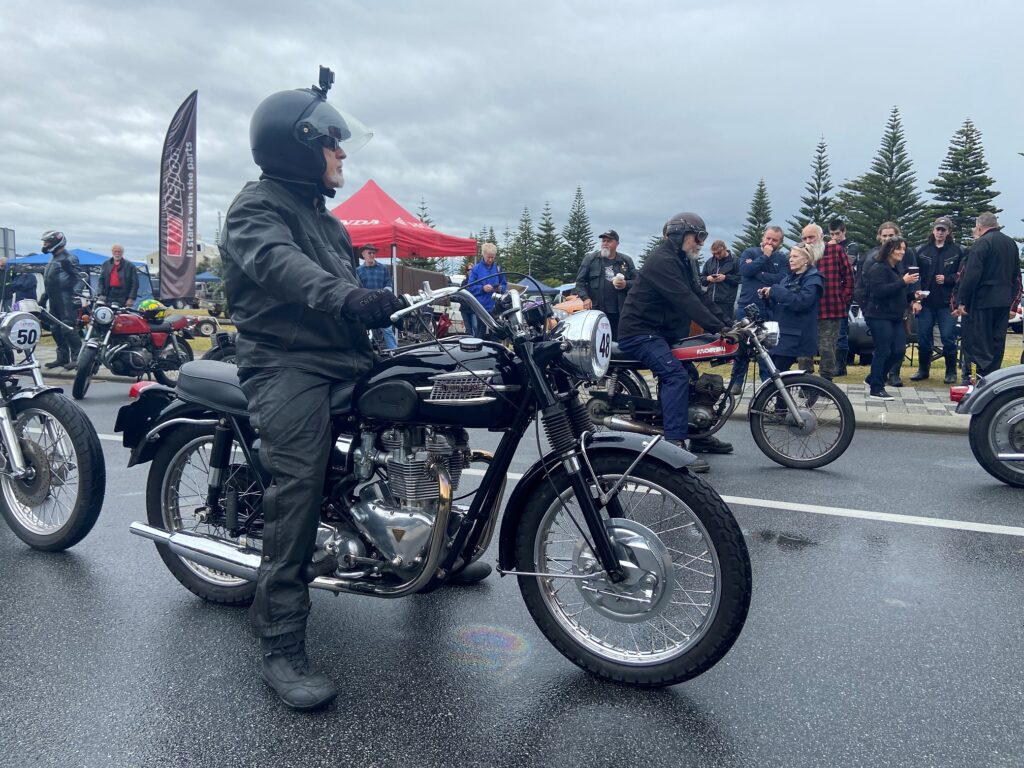 Will Turnbull on his 1960 Triumph Bonneville lines up against Tom Constant, AKA the Toad, riding the ’71 Moto Morini 125. 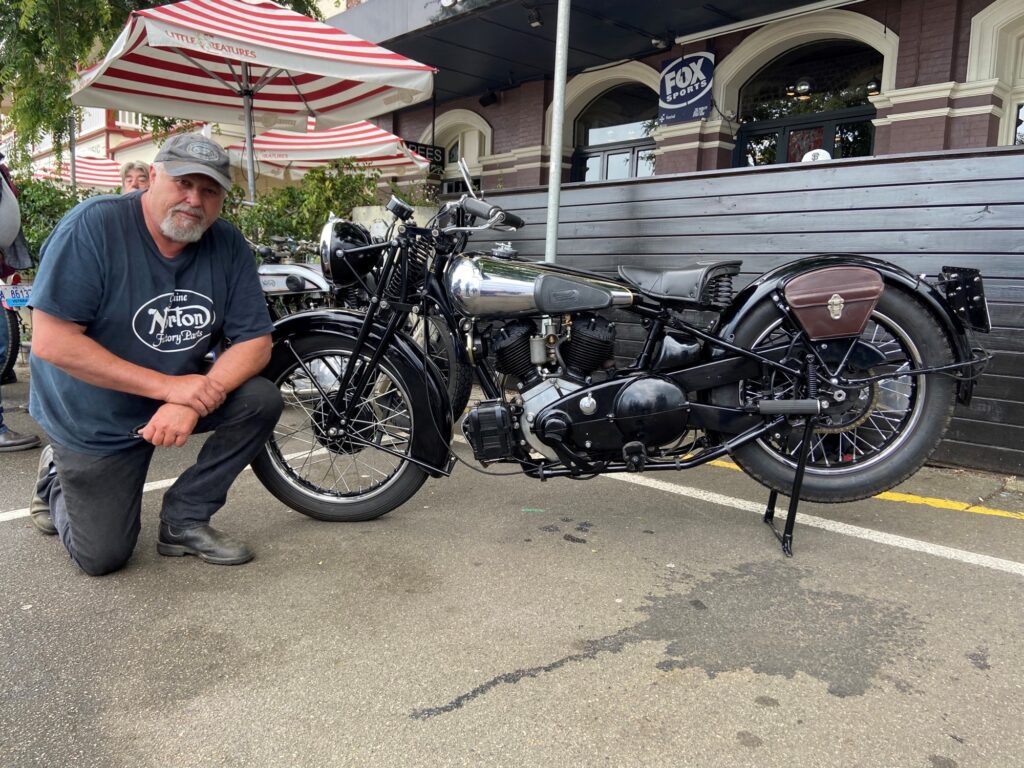 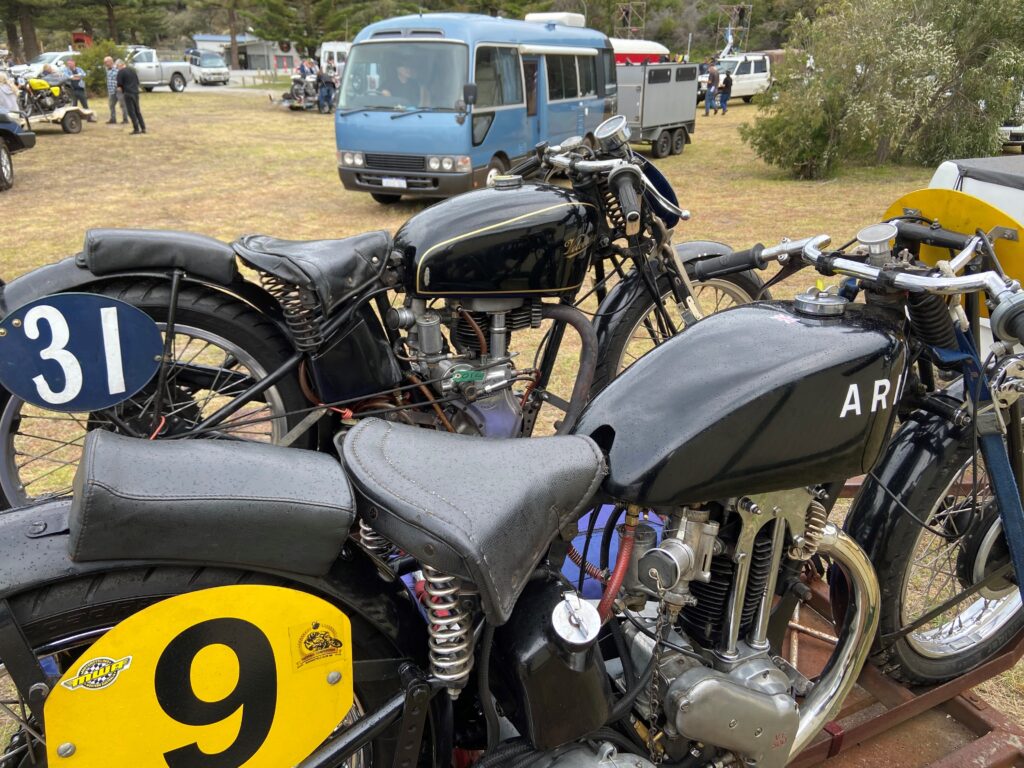 Readers of the Motorshed Cafe will know of our attraction to Ariel motorcycles. 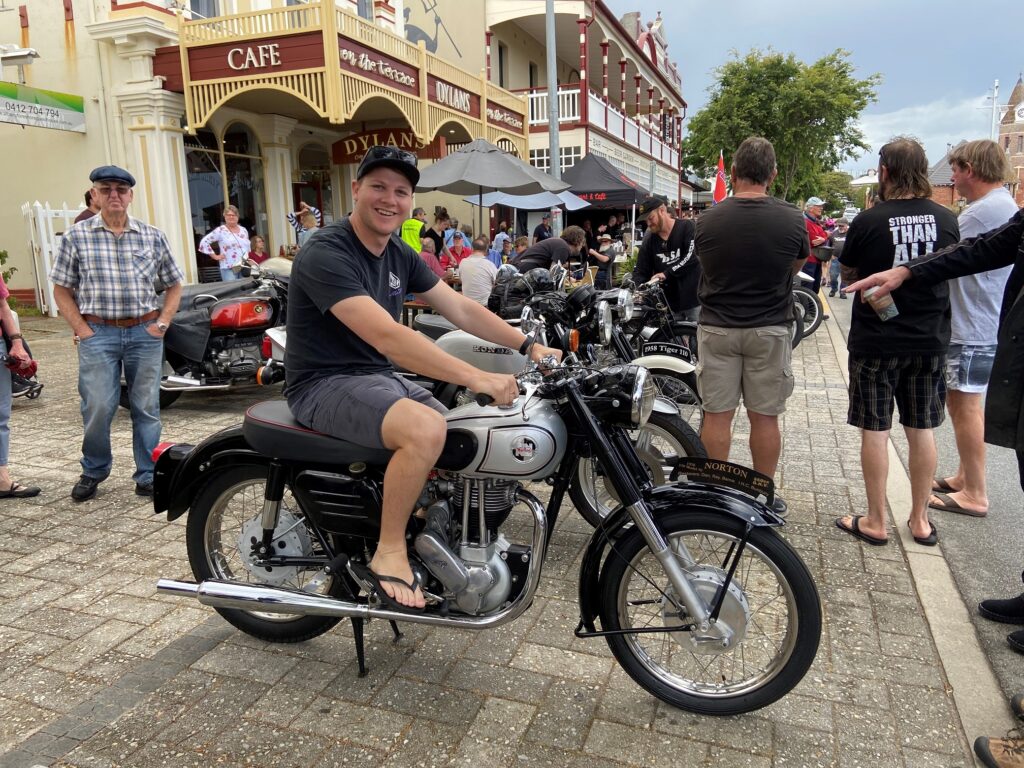 Michael Busby sits astride his late father’s 1956 M50 Norton 350 restored by us here at the Motorshed (see the story elsewhere on this site). It was Chris’ dream to take the Norton to Albany but sadly he did not get the opportunity. His family honoured that dream.