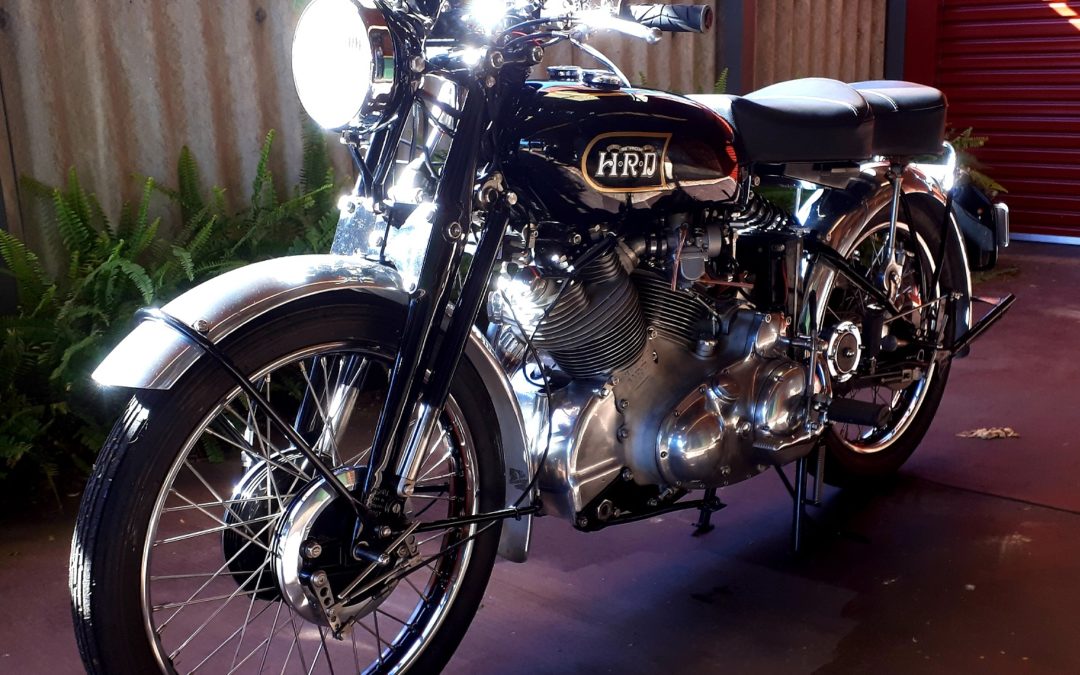 It should come as no surprise to anyone who knows me that throughout my life I’ve had a strong yearning to own a Vincent motorcycle. I’ve come spectacularly close to owning a Vincent about two and a half times but life had other ideas for me (and that’s fine). Vincents have, by and large, remained a figment of desire, the unicorn that was never going show up in my shed. Until now.

A Vincent motorcycle is the classical embodiment of speed and sophistication, a triumph of technical expertise from the golden era of the British motorcycle industry. For decades I have been immersing myself in the literature, both technical and folklore, around these motorcycles. Often I found the dream very nearly outgrew the reality, but dreams often do.

It has long been held Vincent motorcycles were advanced beyond their nineteen forties design but they were created by man, made of metal and alloy and they’re not exactly rare, just very expensive, so, fiscal resources aside, my dream was destined to one day become a reality – I just didn’t expect it would take me forty years!  Of course, having been created by man so too can they be improved by man. One man particularly versed in improving the Vincent is Terry Prince. 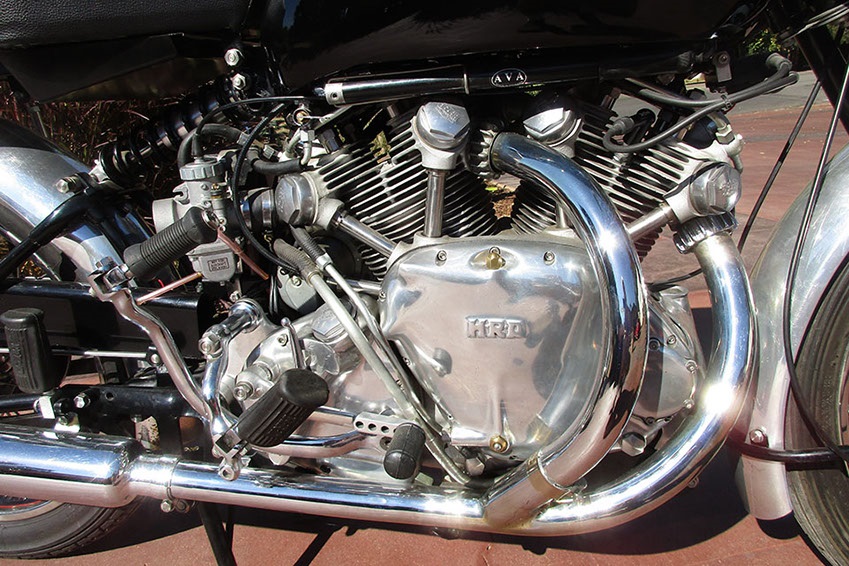 At the heart of the Vincent, indeed the great majority of the bike, is the stonking, huge v-twin engine. One of the most iconic images in in all of motorcycledom.

Throughout the life of the Vincent motorcycle a few names come to the fore, Howard Raymond Davies (HRD), Phillip Vincent, Phillip Irving and Terry Prince. There’s a great many others but those four gentlemen feature prominently in Vincent discourse that I’ve been drawn to over a lifetime of consuming information on the marque. With Terry Prince being the only who is still alive, and therefore still active in Vincent engineering, he is keeper of the Vincent flame. Terry is known around the world as one who will manufacture a complete, Vincent engine, and even the whole motorcycle, using modern engineering and materials. 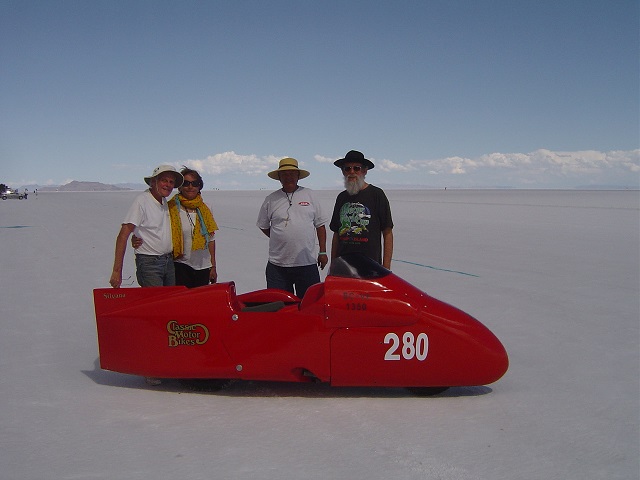 Terry Prince (far left), has a life-long association with the Vincent marque and is recognized today as one of the most knowledgeable people in the world as an expert of these unique machines. Terry is photographed here at Bonneville Speedway where his 60 year-old motorcycle set a world land speed record in 2010 – with Terry at the controls! Photograph courtesy Terry Prince.

When a 1948 Vincent Rapide popped up on the market laying claim to having been restored by Terry Prince consisting 85% of new parts it well and truly pinged my motorcycle radar. Here was a Vincent that promised a balance between original, precious metal and a road-going, reliable link to the iconic motorcycle. The advertising blurb read, amongst other things, “Prince’s hand is evident all around the bike, starting with the front brake hubs, which contain four-leading-shoe internals. Suspension has been upgraded with modern dampers front and rear. An accessory tread-Down centre-stand eases parking chores. The Shadow 5in. ‘clock’ perched atop the forks is a nice touch. Of course the engine – just overhauled by Prince and breathing though modern carbs.” 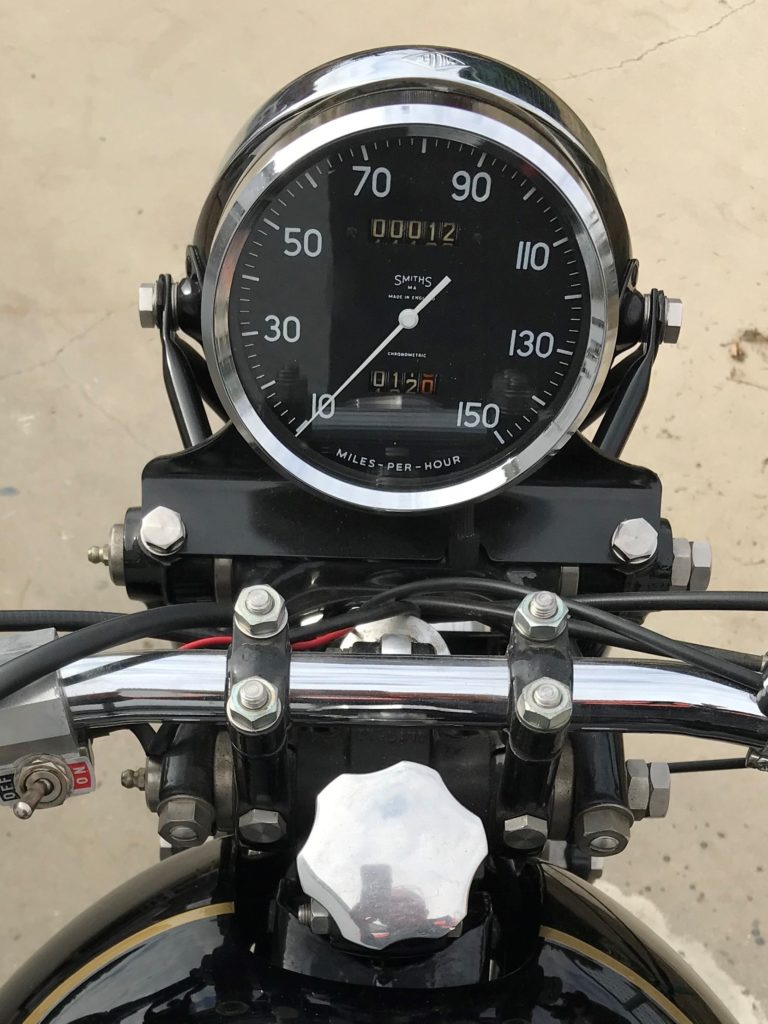 The Black Shadow, 150 miles per hour, speedo is a nice touch to my Rapide. Indeed, many Rapides are upgraded with the massive 5 inch instrument.

The 5 inch clock is a massive speedo that has been lifted from Vincent’s own hot-rod, the Black Shadow. Rumour has it people have been booked for speeding by police who have been able the read the speedo from a position slightly astern of an errant Vincent rider. There were some other Shadow touches that added to the desirability of the machine, although, it should be said, a Vincent Rapide in stock trim is a highly desirable machine on its own.

I resolved to call Terry Prince.

Having made the decision to call Terry, I found I was a bit nervous. What if I wasn’t deemed competent to own a Vincent? I had let opportunities of ownership slip through my fingers in the past, maybe the motorcycle gods had already decided I wasn’t eligible to join the ranks of Vincent owners. Or, perhaps it could be fatalism with all the other machines being pushed aside until this one came along. With all the nervousness of a job interview I made the call. 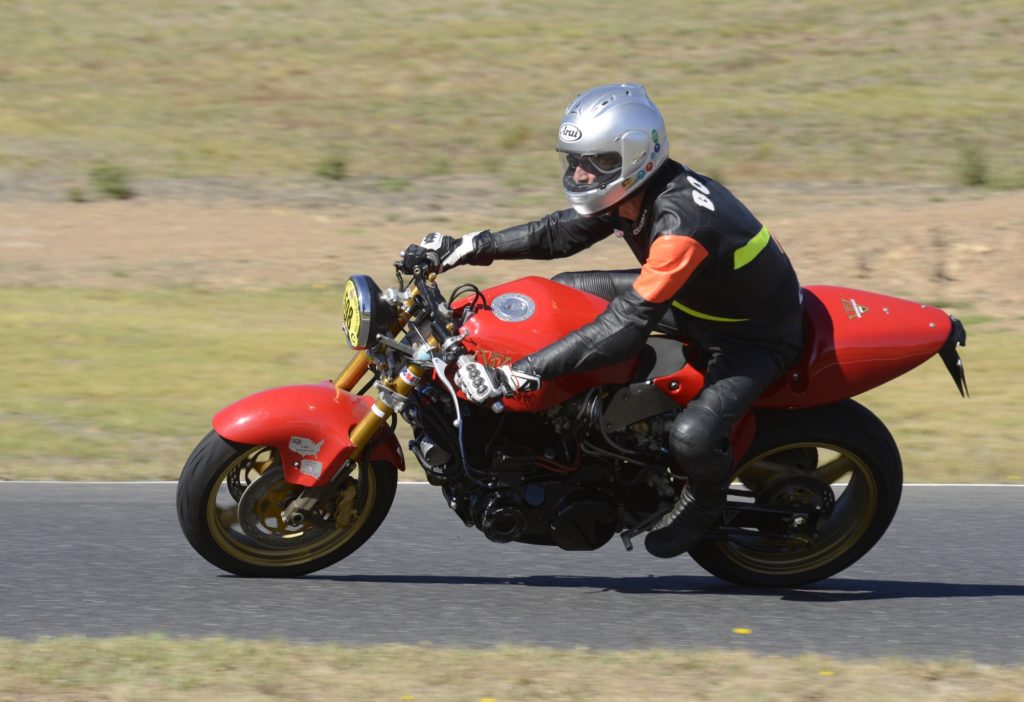 Within moments of calling Terry Prince I was relaxed and we were chatting like old friends. The more we talked the more I wanted that motorcycle. I learned the bike had been reassembled by Terry from a basket case presented to him along with a Vincent Black Shadow. At the time of building the machine it was Terry’s intention keep it as his personal everyday rider, which reinforced the notion of no expense spared when it came to building the machine with upgraded brakes, suspension, modern carbs and electronic ignition.

At the time of calling Terry two other people had expressed an interest in the bike and one was particularly serious, so serious in fact the bike had been shipped from the US to Melbourne as the prospective purchaser lived in Victoria. How the bike came to be in the US is a long story, but, at the time of my call, it was still sitting in California.

Before the bike was due to leave the US a Black Shadow came up for auction in Australia and purchaser number one was keen to bid on it and Terry was prepared to hold the Rapide pending the outcome of the auction. Evidently he won the auction, with a bid of $AUD160,000, as two days later when I phoned Terry he hadn’t heard from either gentleman and the way was cleared for me to send my deposit to secure the motorcycle. I hurriedly sent off a great chunk of the funds I had set aside for my daughter’s forthcoming wedding (sorry Love). 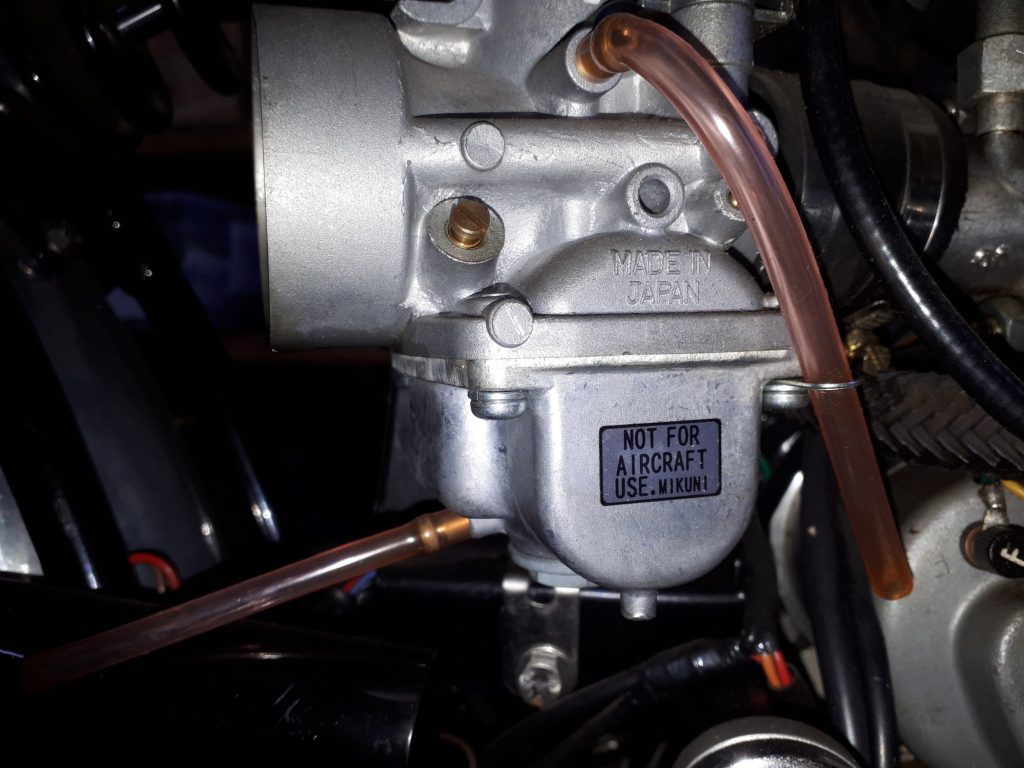 “Not for aircraft use,” probably not for Vincent use either in my book. Mikuni carburettors work well on Vincents, and in my Triton, but having desired a Vincent for over 40 years and pouring over countless machines, photographs and references of these fascinating motorcycles, everytime I look at my Vincent, my eye falls to the Japanese carbs. They will probably be replaced with original Amal items in the very near future.

Sometime later the Vincent was loaded on a ship destined for Melbourne. I waited a few short weeks and as soon as the boat berthed in Melbourne I booked my flights, first to Melbourne to check out the bike and secondly to Sydney to meet the man himself and hand a cheque over.

10 weeks after striking our deal I was standing in front of my Vincent (I still get a pang of excitement when I say ‘my Vincent). She’s a beauty. After two years in the US she’d lost a bit of lustre but I know within a few hours of the bike arriving in my shed she will be looking as good as new. I spent a couple of hours running my eyes and hands over the bike and heard her running. Satisfied with my purchase I set off for Sydney. 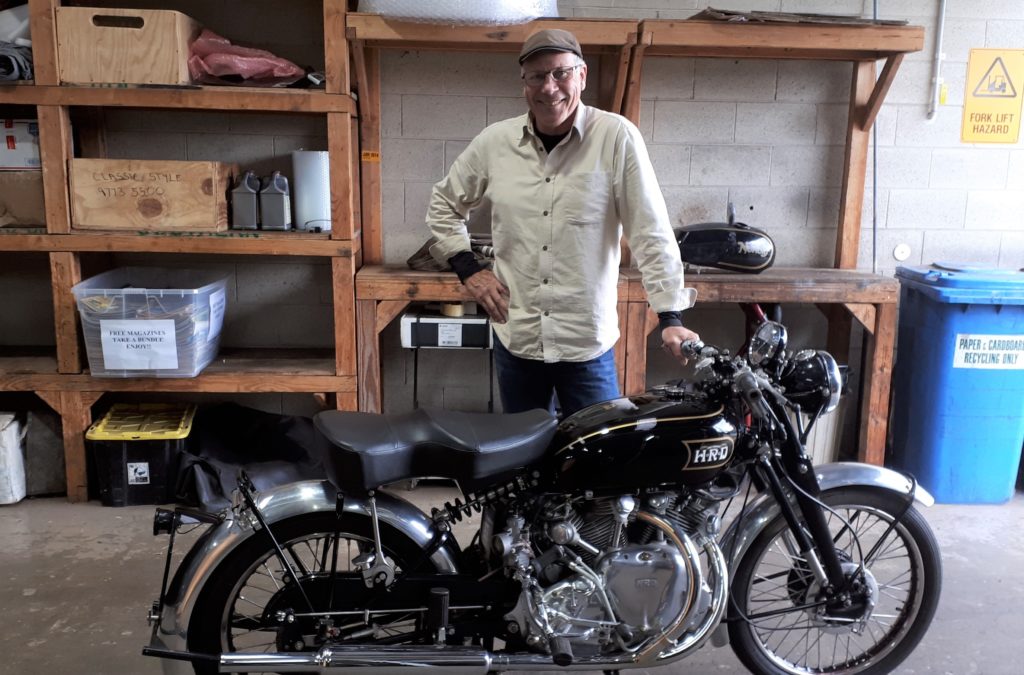 A 40-year dream of owning a Vincent motorcycle is a reality.

Arriving at Terry’s forest hideaway I’m met first by Ursala and then Terry comes out to greet me. Again, I’m immediately at ease with this couple who have invited me into their house for the night. After coffee and a chat I was treated to a visit to the workshop. There was four Vincent motorcycles and an at least one complete engine in the workshop. I was particularly intrigued by the engine because it is a new one, made from all new parts. Sadly, the parts don’t simply just bolt together and, out of frustration, it has been sent to Terry to rectify and make usable, causing him a host of frustrations. Had he been on the job from the get-go it would be fine but now Terry is having to go back to bring someone else’s work up to spec. It’s a difficult and costly task which, at the end of the day, will result in someone having spent a lot of money for a replica Vincent engine.

Standing in the workshop, I’m juxtaposed between the old and the new, where items from this century and last are found in the same engine. Terry’s original engine, one he’s owned for close to 65 years, sits in a modern chassis and is reportedly pumping out over three times its original 45 horsepower. That same engine has also seen regular service in Terry’s Land Speed Sidecar – which still holds world records at Bonneville Speedway. This creation is not unlike Bert Munro’s famous Indian, except Terry started with better stock in the Vincent than a clunky, old vintage Indian.

The stock of new parts, heads, barrels, pistons and just about everything that has a thread is tantalising. One of my close calls to Vincent ownership includes me recently bidding on a pair of Vincent crankcases. Two lumps of alloy that were sold for close to $AUD5,000. At the close of the auction I was slightly relieved not to have been the winning bidder, a relief that was even more palpable when I saw the look on Terry’s face as I recounted the story. Suffice to say I would have been up for a lot of money to bring those crankcases up to anything resembling a functional engine.

Anyway, I needn’t worry about that now as I have the genuine article complemented by some modern parts that maintain the authenticity of a 1948 motorcycle in a package that will outlive me, even if I ride it every day for the rest of my life – which is exactly what I plan on doing. 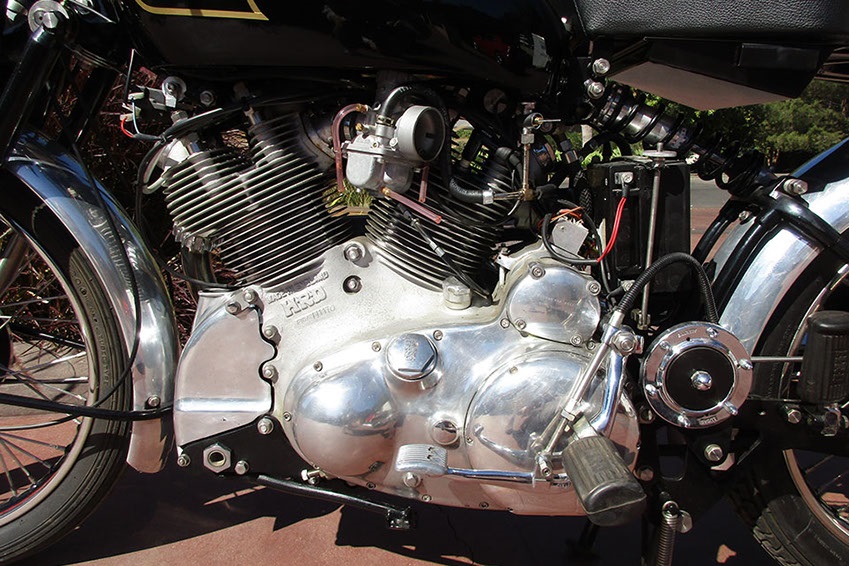