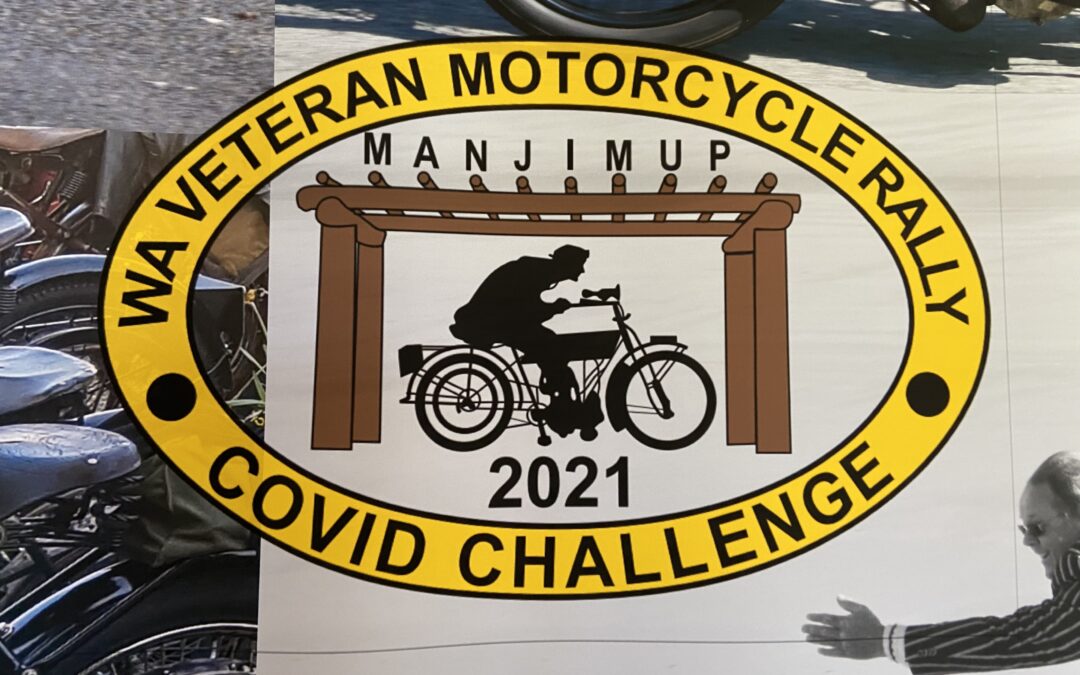 What’s not to love?  A week off, 60 veteran and classic motorcycles and some of the best scenery WA has on offer.  The WA Veteran Motorcycle Rally was a victory snatched from the jaws of the defeat that arrived in the form of the pandemic-generated travel restrictions.  I was lucky enough to accompany the rally as an official on a relatively modern machine from 1948, these are some of my observations.

A remarkable thing one notices when casting an eye over a field of veteran motorcycle riders is they are mostly quite fit.  We’ll get to the reason for that in a moment.  If you’re reading this, chances are you’re a motorcycle enthusiast and you have an actual motorcycle parked out in the garage.  Now, let me guess, that motorcycle has brakes?  Brakes that will bring your machine to a stop?  I’m also guessing it has a clutch, perhaps a kick starter, or, luxury of all luxuries, an electric start?  And don’t get me started on gears! 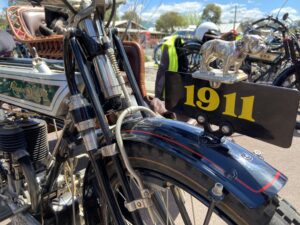 The Indian Harley Club of Bunbury recently hosted the WA Veteran Motorcycle Rally in Manjimup, 300 kilometres South of Perth, Western Australia.  Originally slated as a national rally with in excess of 100 entrants signed up, the event had to be scaled back to a state-based one due to travel restrictions placed upon some 60% of participants.  Nevertheless, the event was a huge success with almost 40 entrants, many of whom brought more than one machine.

In the hierarchy of old, veteran is the oldest.  To participate in the WA Veteran Motorcycle Rally, machines had to be manufactured prior to 1919.  Added to the mix was another 20 marshals riding classic and modern machines, including your correspondent who wore the Clerk of Course tabard.  Which was quite an honour for me.

In general terms, veteran motorcycles start at about 500 cc and go up to 1000, or, in one case, 1240 cc.  Bob Wittingstall’s 1150 Sears Dreadnought is a single speed, V-twin, behemoth that could be ordered from the 1913 North American Sears and Roebuck catalogue.  The Sears is pedal-started in gear with the rear wheel off the ground.  With the engine running, the rider moves the gear lever to neutral and pushes the machine off the rear stand.  The gear lever is pulled back and off you go.  Braking is taken care of by the back pedal method: just like mid-twentieth century bicycles.  In fact, many of the veteran machines at the rally bore a striking resemblance to bicycles or the era, from which they were created. 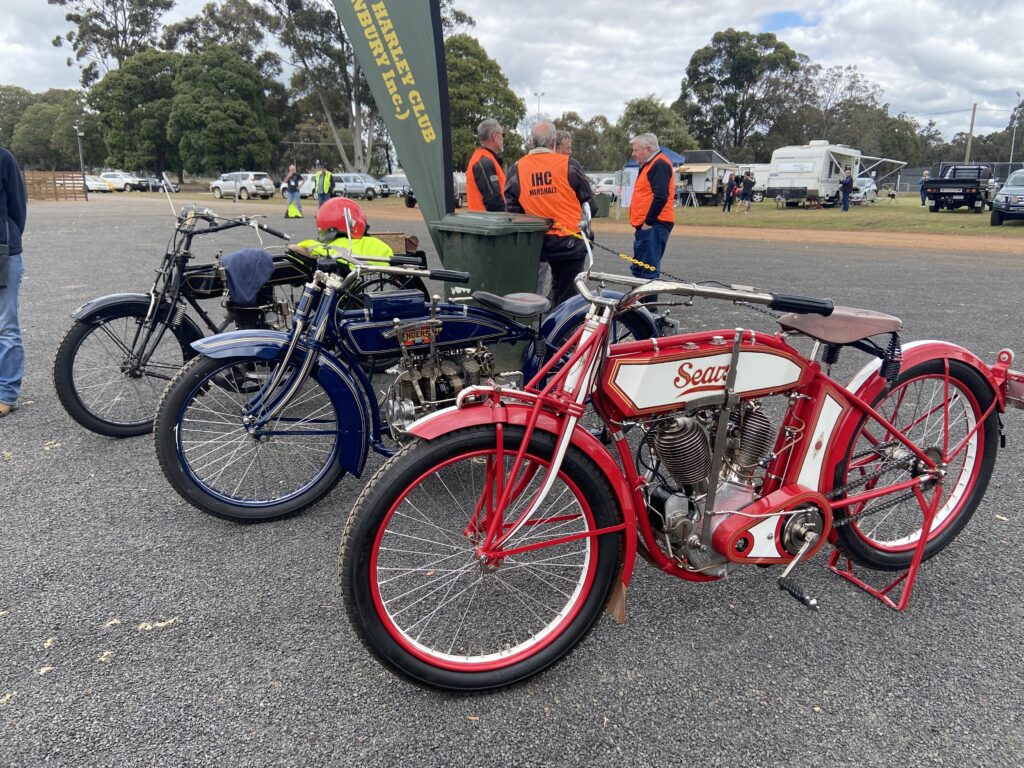 Bob Whittingstall entrusted his 1913 Sears to his friend Tim to ride during the 2021 Veteran Motorcycle Rally.

I must say, at the beginning of the twentieth century the Americans may have possibly had the edge over the Brits in terms of motorcycle refinements.  Harley Davidson, Indian, Thor, Yale, Excelsior and the afore-mentioned Sears had clutches, gears, kickstarts and massive V-twin engines.  What they all had in common was rudimentary suspension and next to no brakes but, to this intrepid band of motorcyclists, that kind of adds to the attraction.  Even grinding to a stop seems to fill them with glee and riders and support persons beaver over stationary machines in a frantic endeavour to avoid being trailered back to camp.  Most often they got them running again, including an impressive top end rebuild by Michael Rock on his 1915 Triumph outside the Pemberton Hotel during the lunch break. 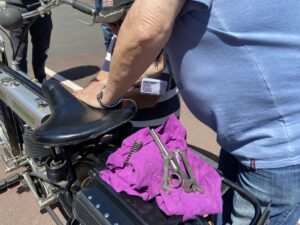 Repairs on the run were very much the order of the day. Here Steve Merralls works on his 1913 Triumph at the Northcliffe lunch break.

With the exception of the American twins and perhaps half a dozen other machines, most of the veteran motorcycles at the rally were started by peddling or pushing, requiring a fair degree of physical rigor in either case.  An energetic rider must get up to a decent pace, running alongside his machine (there were no female entrants this year, but they are out there!) then launch himself onto the saddle as the bike fires once, twice maybe three times.  Stop signs, traffic and other inconveniences are negotiated with care, lest the rider must dismount and do it all over again, which was frequently the case.

The rally went from Sunday to Friday through some of the most picturesque countryside regional WA can offer.  Manjimup people, shire and shopkeepers can take a bow.  They were the perfect hosts for a quirky bunch of folks riding an even quirkier bunch of motorcycles.  Patience was quite often called for as motorcycles and side-cars chugged along at 30 or 40 kilometres an hour, so a tolerant community was very much appreciated by the dare-devils piloting the ancient machines. 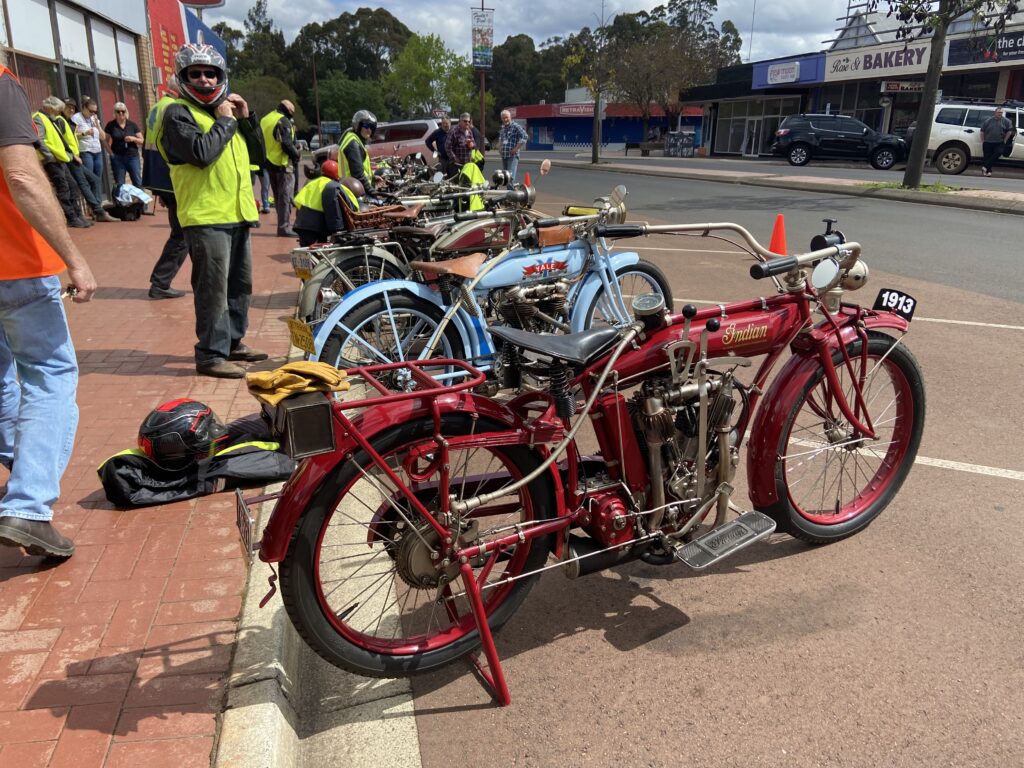 We travelled as far afield as Northcliffe, Pemberton and Nannup.  Technically, Nannup was cancelled due to foul weather however a few hearty souls, including your correspondent made the trek to Nannup via Donnelly River.  It bucketed down on us and the water found its way into a few of the vintage magnetos but, aside from that it was a wonderful day, typical of the entire week.  The Indian Harley Club, Manjimup Tigers Football Club (who catered for the event) and people of Manjimup are to be congratulated. 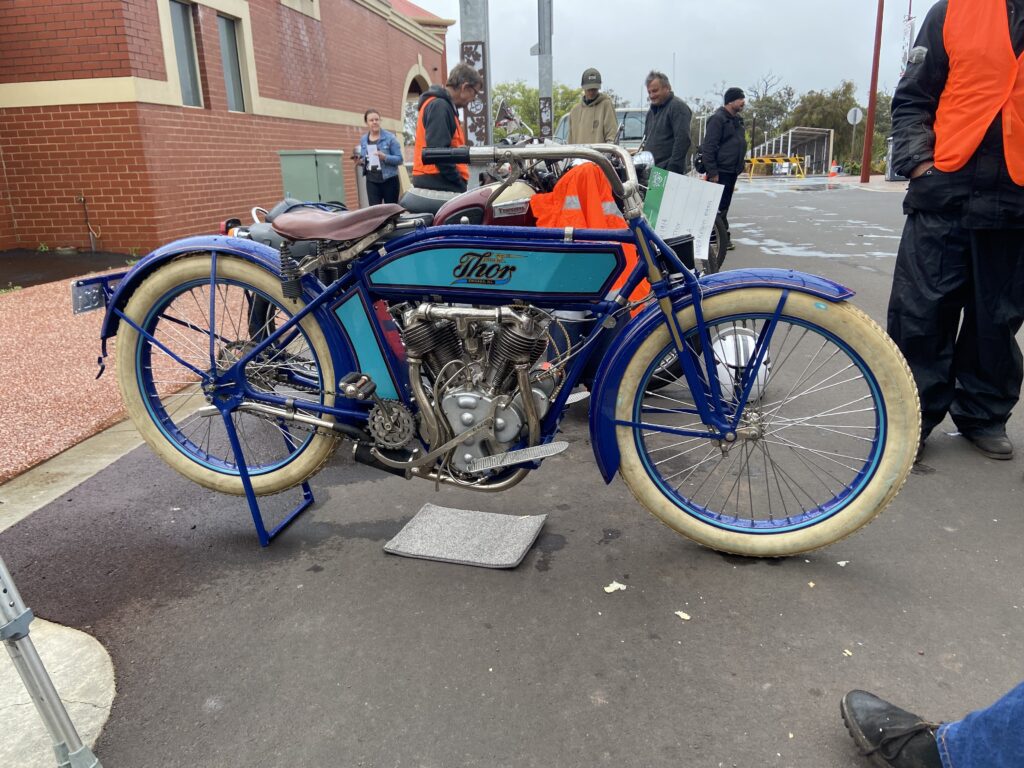 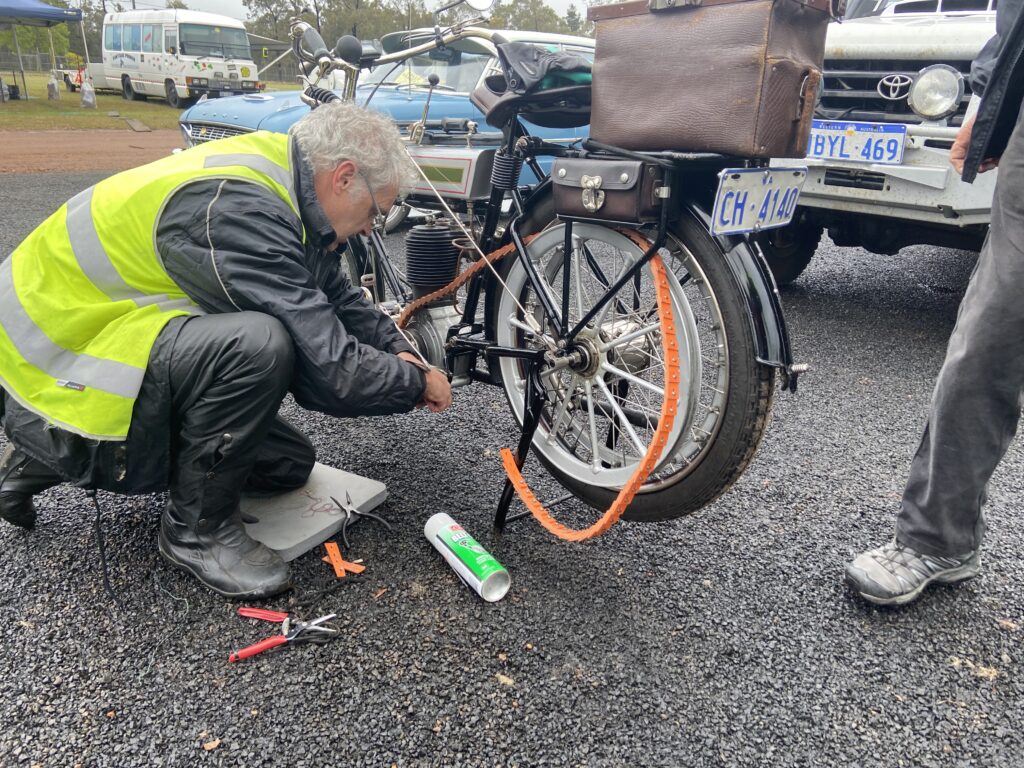 Dave Anderson prepares his 1913 Triumph for the day with a new leather belt to help cope with the expected bad weather – which causes the belt to slip and forces the riders to push their machines up some of the more challenging hills (which, it must be said, also happens on sunny days with dry belts). 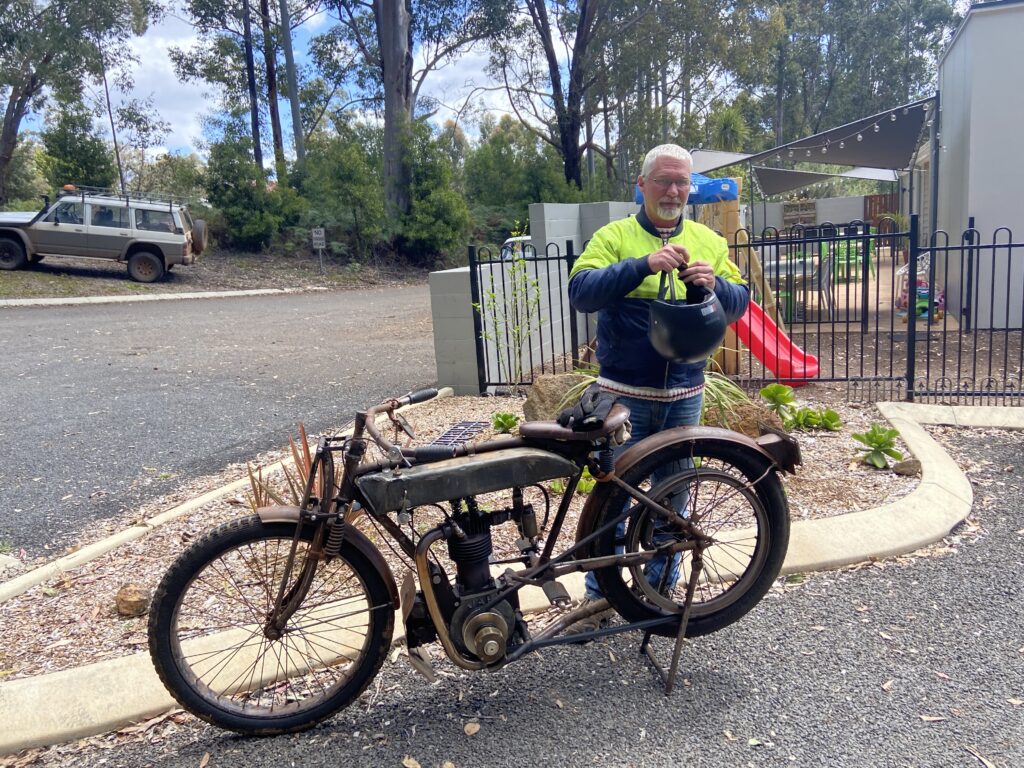 Steve Turner basks in the knowledge his Australian made Corah was the loudest, and some would say, sweetest sounding single in the event. 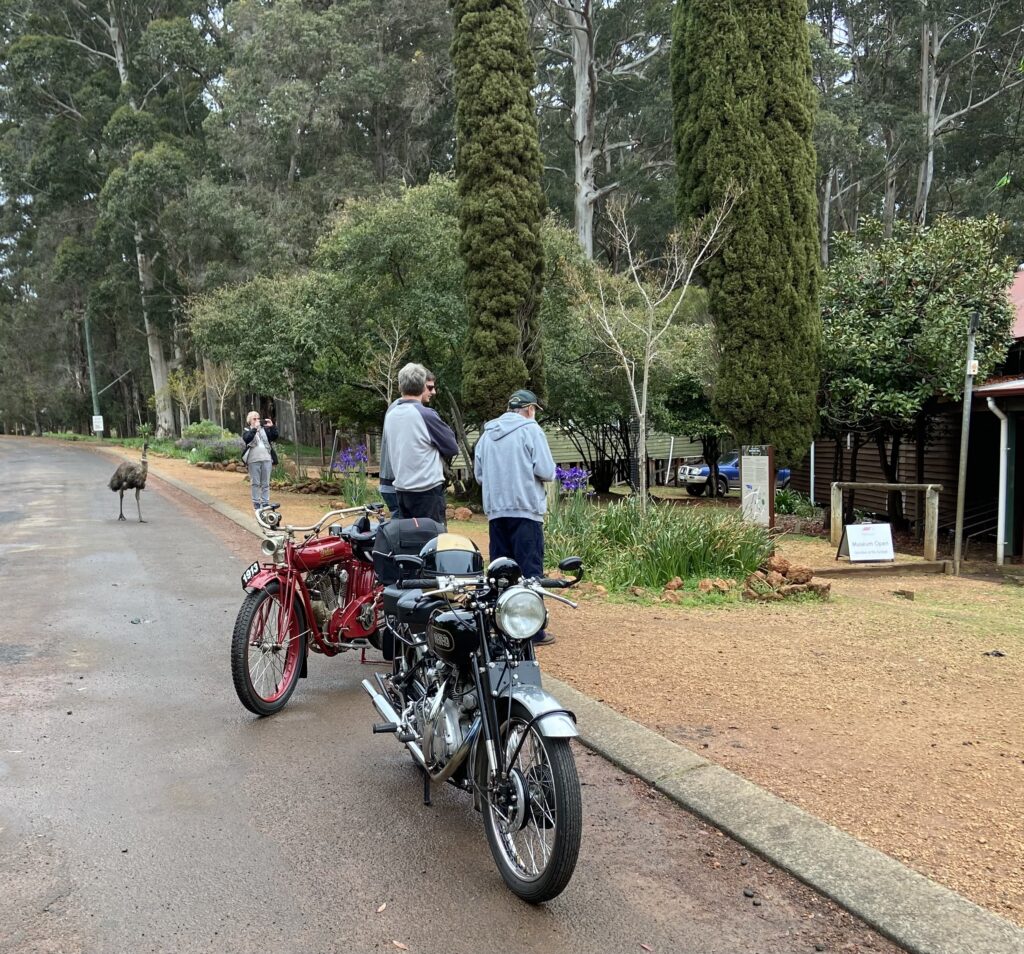 The Tuesday ride was cancelled due to inclement weather however the more stoic riders still ventured out. Here one of the locals creeps up on some of the participants at Donnelly River. 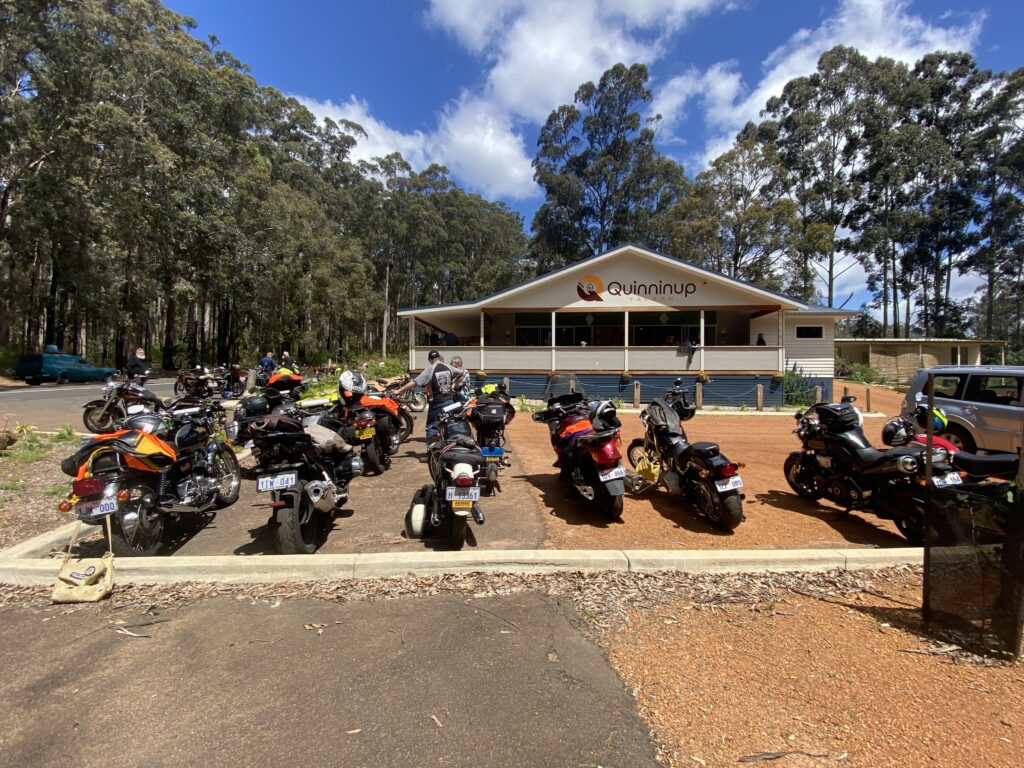 Marshall’s bikes were usually parked up away from the main veteran group. 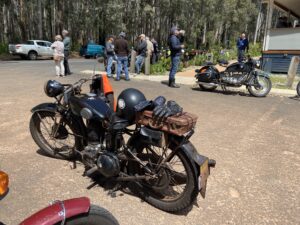 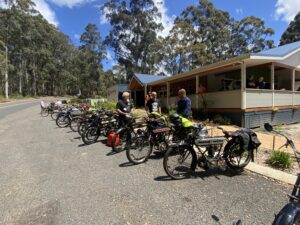 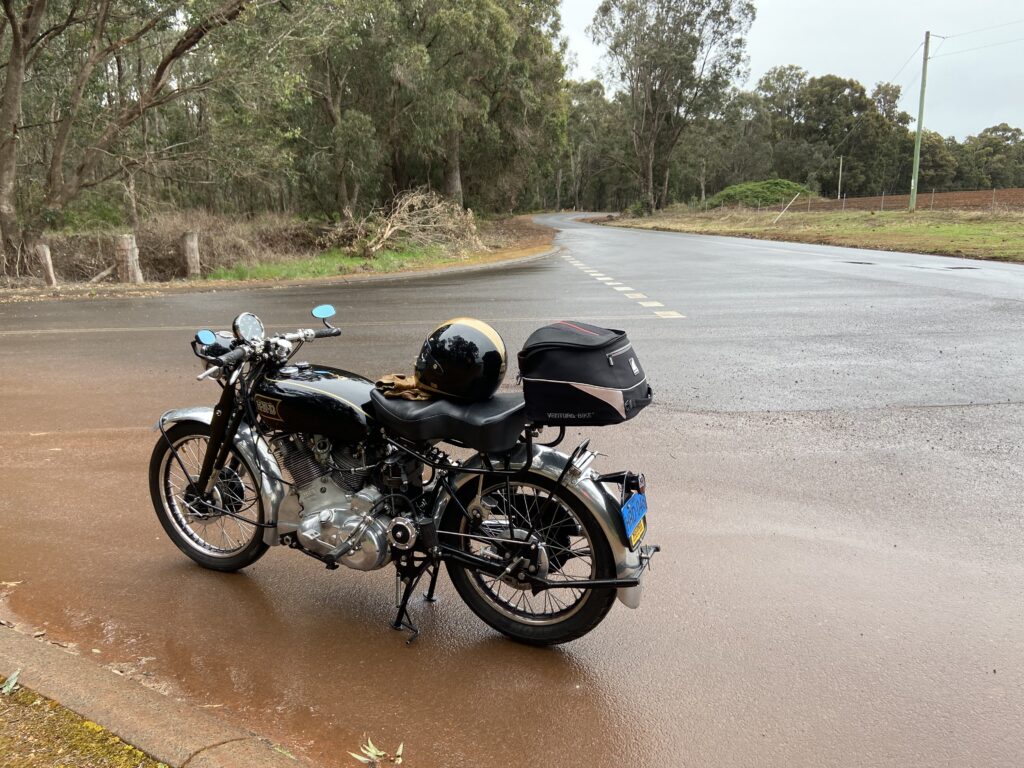 The Clerk of Course, and your humble narrator, enjoyed a week of classic touring on my 1948 Vincent HRD, a relative youngster by the standards of the event.

Read more about the Vincent here and here. 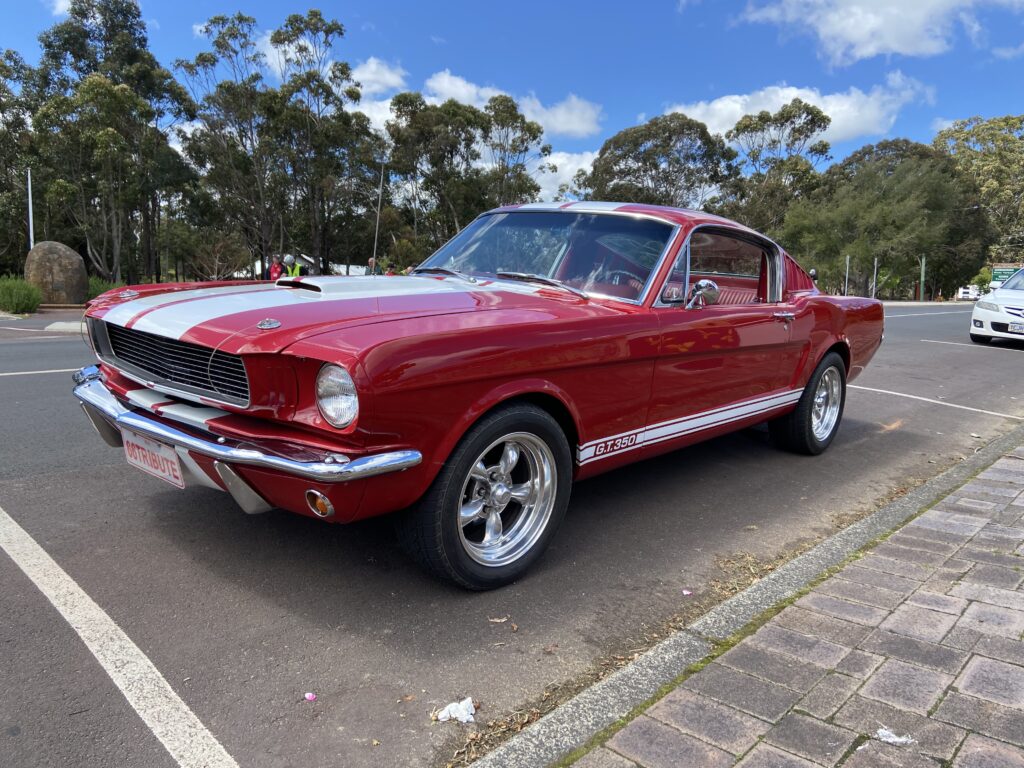 Regular readers will understand why I posted this very tasty 66 Mustang Fastback.

You can read more about Mustangs, one in particular, here, here, and elsewhere on the Motorshed Cafe site. 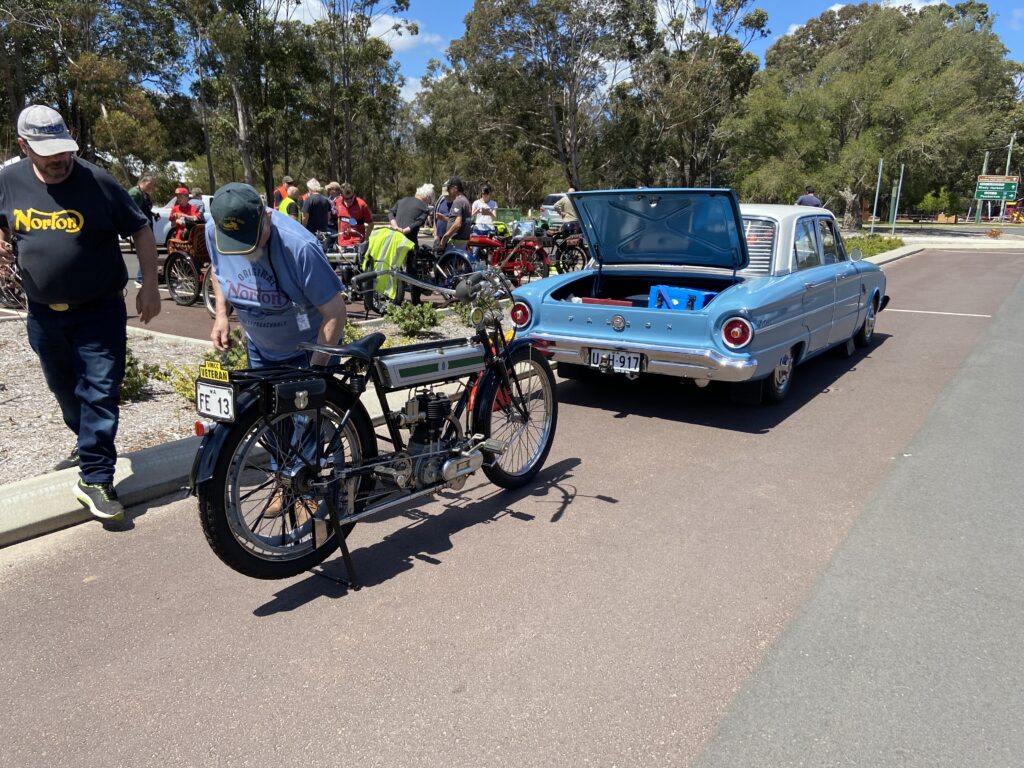 Another Classic Ford, this one was Chris Merrall’s support vehicle, with Dad Steve at the wheel. 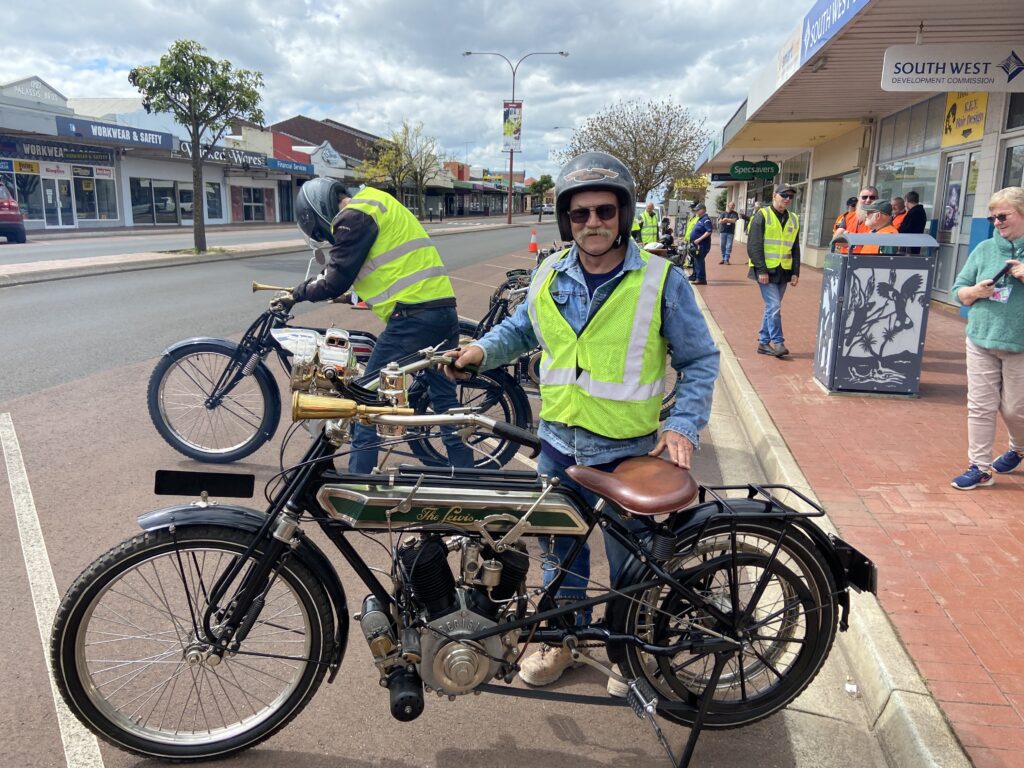 Another Australian made motorcycle, Rob Giles’ 1914 motorcycle named The Lewis sounded as good as it looks. 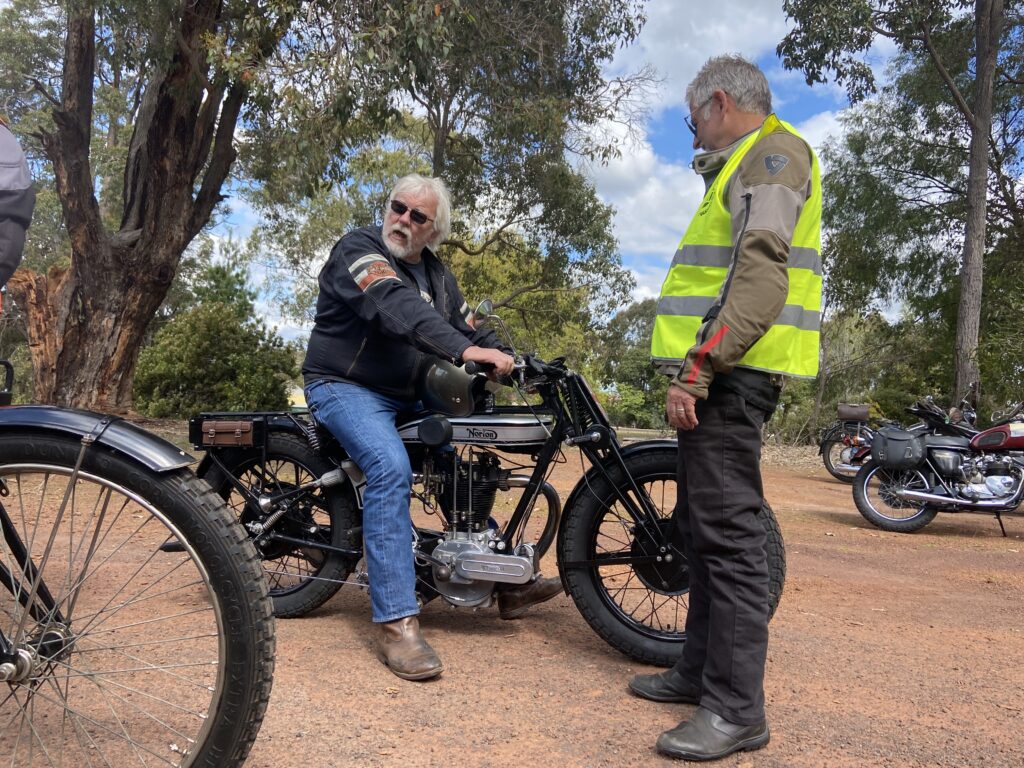 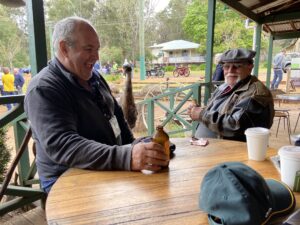 John Keenan is about to lose what’s left of his icecream – ironically a drumstick. 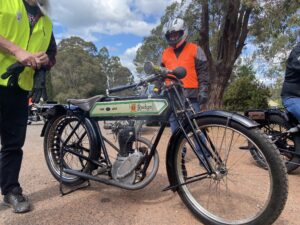 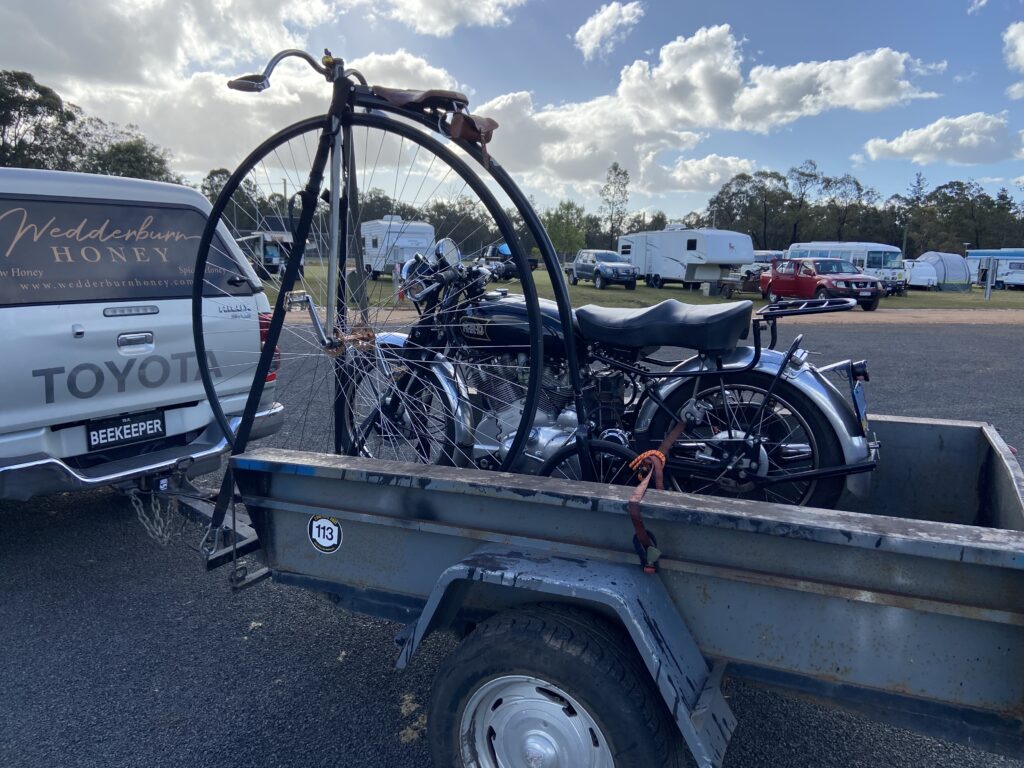 At the end of the week it was time to pack up and go home.

If that Penny Farthing has piqued your interest, read more about it here.