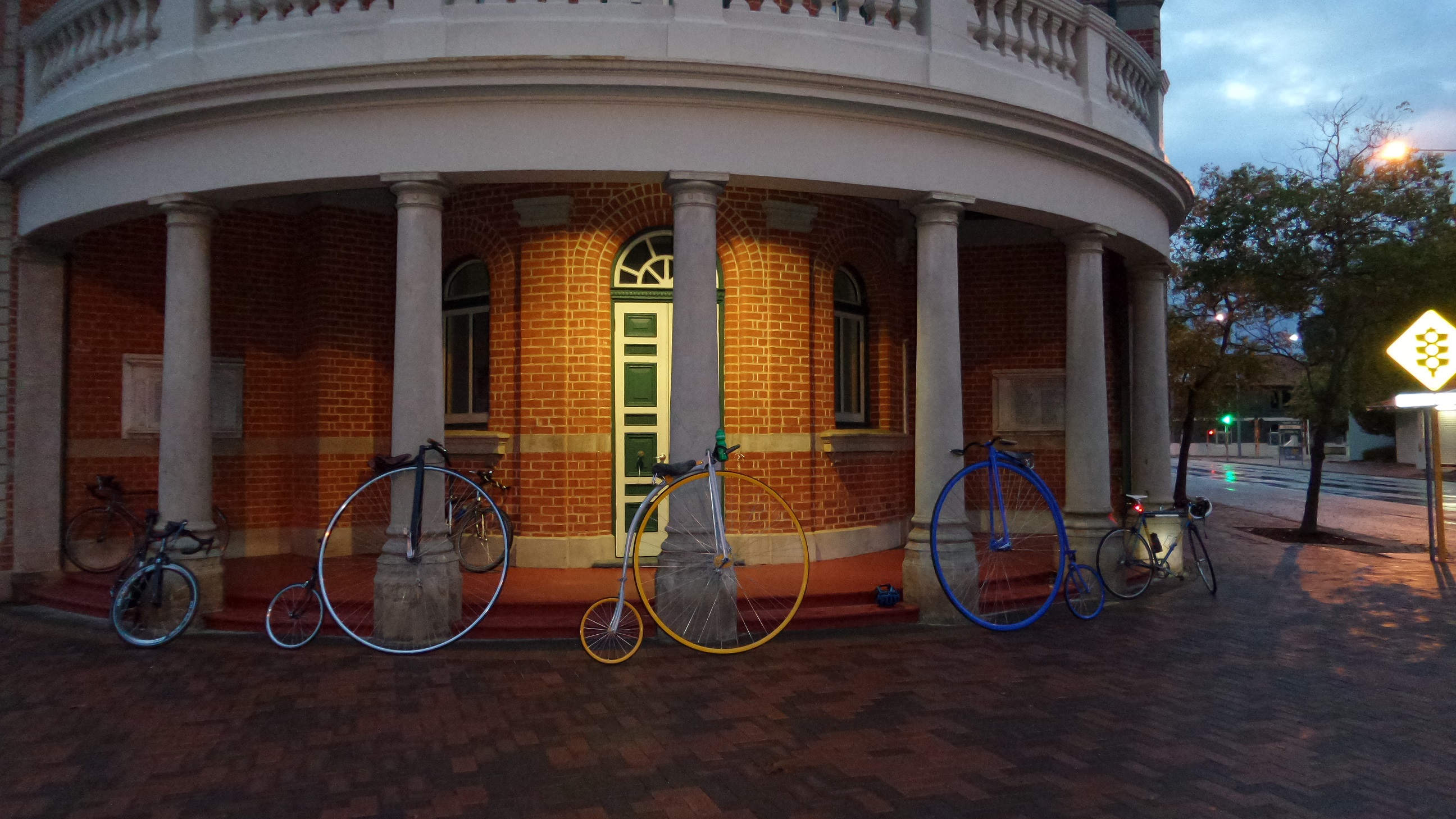 We here at the Motor Shed are fond of most things with two wheels, even those which include us as the motor, such as the humble bicycle. This story was first published in Early Auto magazine, the official organ of the Veteran Car Club of WA. It is revisited here as a prelude to us returning to the Goldfields again in 2019 for the Perkolilli Revival.

Robert Pirsig in Zen and the Art of Motorcycle Maintenance, wrote of the sense of presence one experiences when travelling by motorcycle, the scenery no longer passes frame by frame, as if on television.  Pirsig explains, “on a cycle the frame is gone. You’re completely in contact with it all. You’re in the scene, not just watching it anymore, and the sense of presence is overwhelming.”

Pirsig’s philosophical discourse on quality has very little to do with cycling but the act of riding his motorcycle allowed Pirsig to gather his thoughts and experience the sense of wellbeing that comes with propelling one’s body through the elements, but, perhaps Pirsig has only half the scene.  Remove the engine, the heavy protective clothing, the fairing and helmet and the sense of presence is even more pronounced. 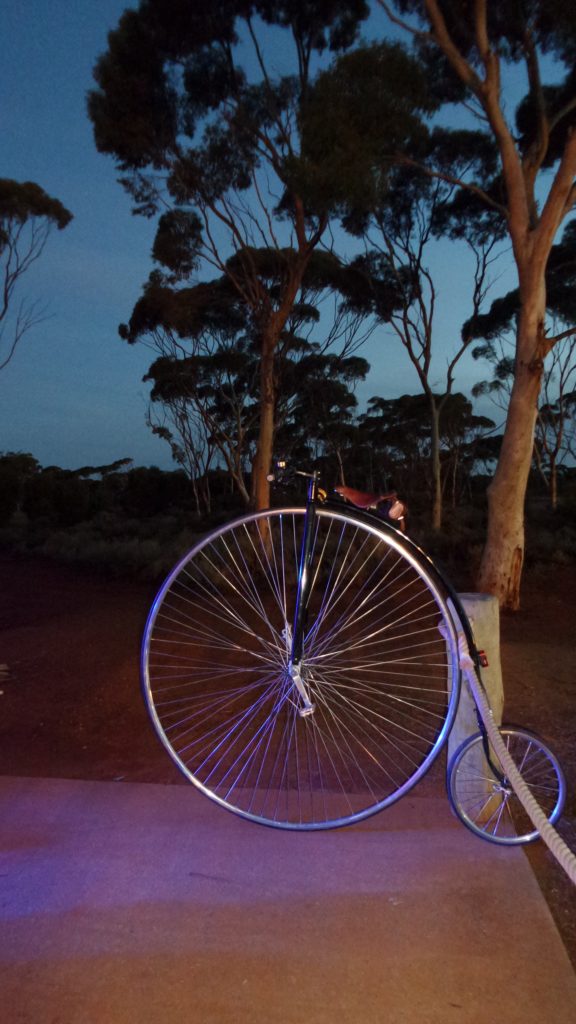 Long before the internal combustion engine found its way into a cycle frame, before the chain drive, gears or brakes, cycling was a rudimentary yet exhilarating experience.  People were able to travel from place to place without the need of a horse or carriage, however, there was a catch.  Early bicycles were slightly unstable, bordering on dangerous, and came with an enormous front wheel.  Fortunately a fix was at hand.  In the short space of about 20 years the penny farthing was phased out in favour of the safety bicycle, the most utilitarian form of personal transport yet devised.

It is for good reason the 1890s were universally known as the Golden Age of Cycling.  Pneumatic tyres, brakes and the free hub were making an impact upon the development of a machine that only a few years earlier had arrived perfectly.  Perfectly, because the original design has endured for over 150 years and, despite a great deal of effort to improve on the design, the diamond frame, chain-driven bicycle remains largely unchanged.

At about the time the safety bicycle was making an impact upon the pedestrian world, word was filtering back to England about untold riches that could be scooped from the red dirt of the West Australian Goldfields.  Many ambitious, young men were steaming towards Australia and the next big gold-rush.  One of those young men was my great-grandfather, Albert Jesse (Tommy) Talbot, 20 years of age with stars in his eyes, young Tommy was heading to Australia to make his fortune.

I love the Goldfields.  I’ve spent a lot of time living and working in Kalgoorlie and I always welcome an opportunity to return.  This time I was in the Goldfields for the National Veteran Car Rally but earlier in the year I went out to run the Goldfields Pipeline Marathon, a 42 kilometre footrace through the red dirt and mallee scrub, alongside the famous pipeline that has been keeping the Eastern Goldfields of WA hydrated since 1903. 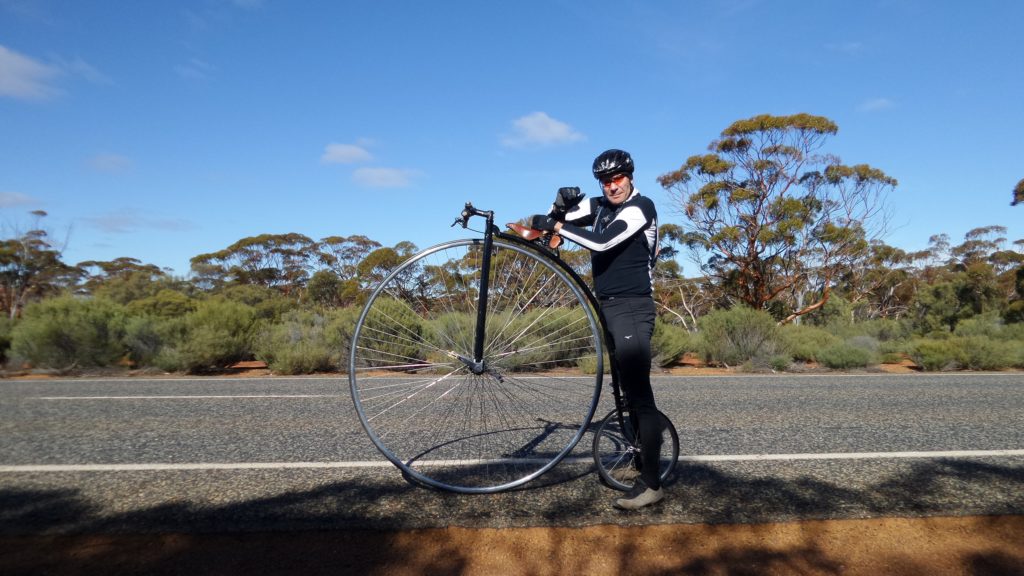 As I trundled towards the town of Coolgardie on my replica penny farthing I looked down at the bitumen, way below my feet, and felt some relief that the rough aggregate had been rolled smooth by countless trucks and road-trains.  Conversely, I felt a slight pang of alarm every time I heard another one of those trucks approaching from the rear.  Despite the vast amount of traffic on the Goldfields Highway, there is no reasonable shoulder to steer towards.  The white line has a rumble strip and to the left of that there is, at best, about 20 to 30 cms of bitumen.  On most bikes running off the hard surface onto the gravel wouldn’t be a problem but, on my 55” penny farthing, leaving the bitumen could be treacherous.

When John Kemp-Starley set about improving on his uncle’s penny farthing design his primary intent was to make something a little safer.   John was able to achieve this by introducing the chain drive and bicycle wheels once again returned to the same size, front and rear, as they had been at the time of the French velocipede.

The velocipede was an ungainly machine which consisted of two wheels joined by a wooden frame with peddles attached to the front wheel.  John Kemp Starley’s innovation was significant because no longer was gearing determined by the size of the front wheel, as had been James Starley’s hypothesis.   James Starley’s bicycle was as brilliant as it is simple, he found that by increasing the size of the front wheel of the velocipede one could travel further with each peddle stroke.  He made the driven wheel to such a size he could barely reach the peddles and, in homage to Shakespeare, Starley named his cycle ‘Ariel’ after the playful sprite in the Tempest. 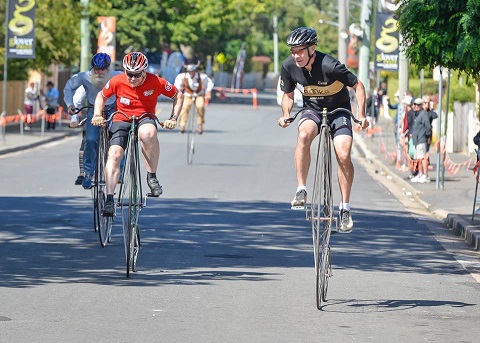 Yes, we even race these things. This was taken at the 2017 Australian Penny Farthing Championships in Evandale, Tasmania.

Riding a penny farthing comes with a great many caveats.  Not the least of which is the size of the front wheel is best determined by the inside seam of the rider’s leg, the machine can only be stopped by dismounting it, the peddles are fixed, it’s impossible to raise out of the saddle and the brake should only be used when one’s weight is upon the rear mounting step because, to do otherwise, may result in the aptly described ‘header.’

In running off the road, it is the header that I’m mainly concerned with.  If the wheel gets stuck on some jagged bitumen or anything else that prohibits forward momentum there is only one way to go and that’s headfirst into the ground, which is a long way down.   I’ve done it before, it’s unpleasant and it plays through my mind ever time the wheel comes close to the edge of the road.  But not today.  Today the big wheel was turning beautifully, the sun was warming my back and I was on a roll.

When John Kemp Starley came up with his chain-drive safety bicycle the penny farthing was retro-named the ‘ordinary,’ as opposed to the ‘unsafe’ or ‘dangerous’ bicycle.  Lexicon aside, I can’t help thinking a good many people must have been hurt by riding these things on unsealed roads.  Another road-train and I edge as close as I dare to the side of the road.

122 years earlier, my great grandfather Tommy had also struck out for Coolgardie.  In 1892 Southern Cross was the furthest town East of Perth at some 370 kms from the WA capital.  Tommy teamed up with two chums (as they were called back in the days of the gold rush), Harry Baker and Dick Fosser, and headed out of Southern Cross purportedly following the trail of two experienced miners, Arthur Bailey and William Ford.

What happened when the men arrived in the area which was to become Coolgardie is the subject of much conjecture but within four days of arriving Tommy and his chums hit pay-dirt, scooping up a large amount of gold that was easily located through surface mining, or ‘napping’ as it was known.  Evidently the young men kicked their knees up, hooted and hollered as they stuffed their pockets full of gold nuggets.  The behaviour of the young men soon drew the attention and then the ire of Bailey and Ford who proceeded to claim the ground as theirs.  Tommy protested the ground had not been pegged – only to learn Bailey was busy doing that whilst Ford held them at gunpoint.  The area later became known as Fly Flat.

As I got closer to Coolgardie I could see Fly Flat from the seat of my penny farthing and marvelled at the tenacity of anyone to trek all the way out here to search for the elusive yellow metal.  In running the Goldfields Pipeline Marathon from Coolgardie to Kalgoorlie, I covered much of the ground that my great grandfather would have travelled over a century before.  With a clear trail through the bush and aid stations every seven kilometres or so, a long run in the goldfields can be a pleasant and rewarding experience.  By the time Tommy and his mates arrived at Fly Flat the nearest aid was over 180 kilometres to the West.

A brisk headwind and a couple of stops for photographs or a drink had pushed my 38 km ride out to over two hours.  My ride coincided with a veteran car rally so Coolgardie residents and tourists were out in full force as I rode into town on the big-wheel.

“Did you ride this all the way from Kalgoorlie?” was asked more than once, to which I would reply, “yes, and I’m only half way, I’m still yet to ride back.”

I visited the local museum and viewed some photographs of my great grandfather and a telegram sent by the Mining Warden in Southern Cross to Perth.  This telegram reads:

To Under Secretary for Lands

A miner named Talbot in from Bailey’s find with two hundred and eighty seven 287 ounces of gold.

The telegram lead to the largest gold rush in Australia’s history, a fact which is proudly emblazoned across large signs at each end of Coolgardie.