The Motorshed Mustang Rebuild, part I.

As we begun to scratch the surface, it was evident all was not well beneath the shiny white exterior of our Mustang coupe.

After the transmission and engine were removed from my Mustang I (quite mistakenly) figured I could tackle the rust and body work in my shed.  I had done it before with my Studebaker, and an XJ6 Jaguar before, that so I began to strip the paint of the worst areas. 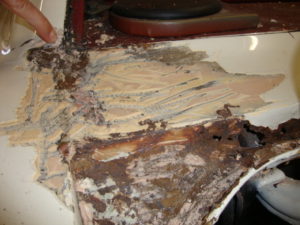 Scratch below the surface and dirty, rusty metal was evident all through the car.

The paintwork looked okay and polished up well but there were tell-tale rust bubbles in all the usual places where water and moisture can gather.  What I was unaware off was the extent of that rust.  As I stripped back layers of paint I was confronted great gobs of putty and body filler.  It was like removing the layers of a rotten onion, including the tears.  In some places the body filler was over half an inch thick!  Whoever prepared the car for paint on a previous occasion clearly had the skills of Rodin.  To have so much bog caked on the car and actually have it look like a Mustang was quite remarkable.  It should be remembered, now, if you crash your car, you can purchase new body panels from which to repair it with.  Back in the sixties and seventies in Australia this was not an option and panel beaters had to live up to their name, hammering out dents and covering their work with body-filler.  My car had the scars of many a crash.

By the time I had reached bare metal, panel by panel, I was confronted with bent, buckled and rusty body parts that were good for nothing but the tip.  Before I had even a third of the car uncovered I realized I was in over my depth.  The job required someone with skills beyond my rudimentary grasp of panel work.  A work colleague had an acquaintance that ‘paints cars,’ and took me to meet him. 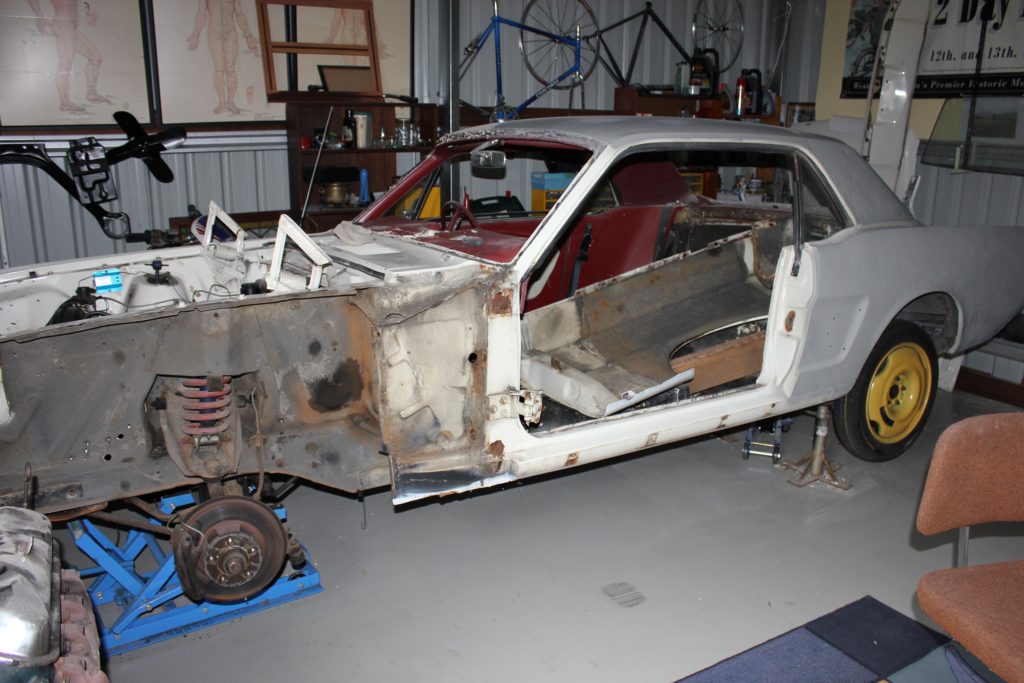 Working at home: it was about now when I realized I had reached the limit of my body building and repairing skills.

On walking into Joe’s workshop I was confronted with an assortment of American and Australian classic muscle cars at various stages of restoration.  I knew this was the place for me.   It was like stepping into an automotive surgery where valuable, collector cars were given a new lease on life and I wanted to be part off it.  I wanted to spend as much time in that place as I was able to so I asked if I could be part of the process and Joe agreed to let me participate in the restoration.  I hastily arranged a month’s leave from work and readied myself to become the master’s apprentice. 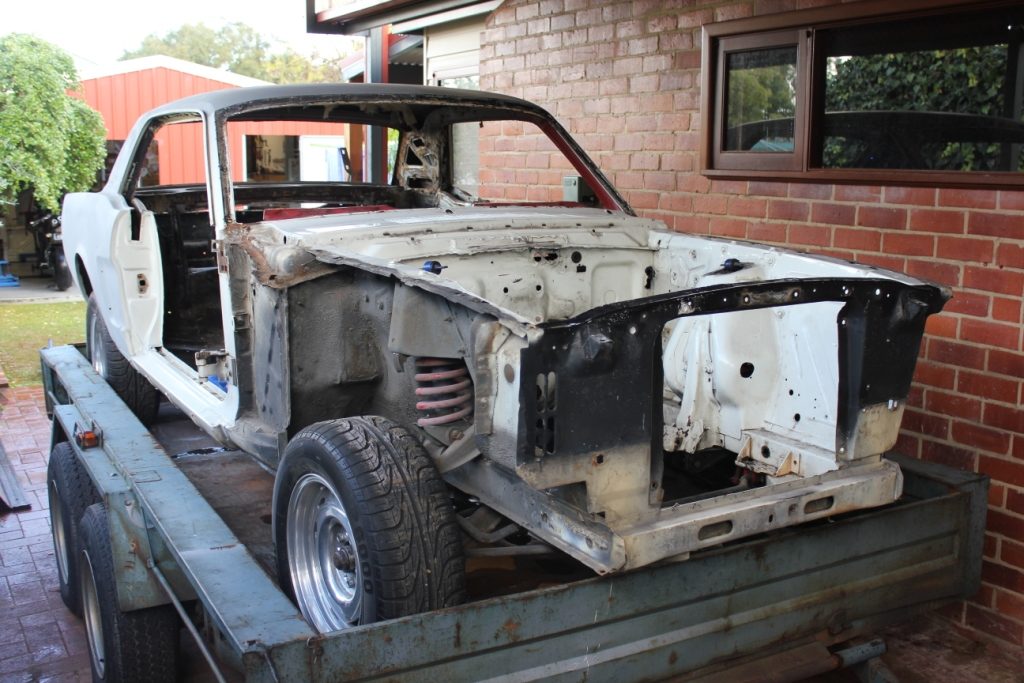 The Mustang is loaded up for transport to a professional, old-school body building workshop to share floor-space with many other classic American and Australian muscle cars.

It would be a few weeks before I could get away from work which gave Joe’s men time to sand blast the rest of the paint and gunk from my Mustang.  It wasn’t pretty.  In the raw metal, my car was a rusted, holy, twisted wreck that, according to Joe, had, “more hits than Elvis.”  It would require just about every panel to be replaced.  This hurt.  Firstly, emotionally but later pain would be of the fiscal kind.  My wife reads this column (look away now love) and I feel a bit of guilt and anxiety talking about it but Joe estimated it would be between $35,000 and $40,000 to bring my body back to new, therefore, I had to make a decision to continue of cut my losses and get out of the car. 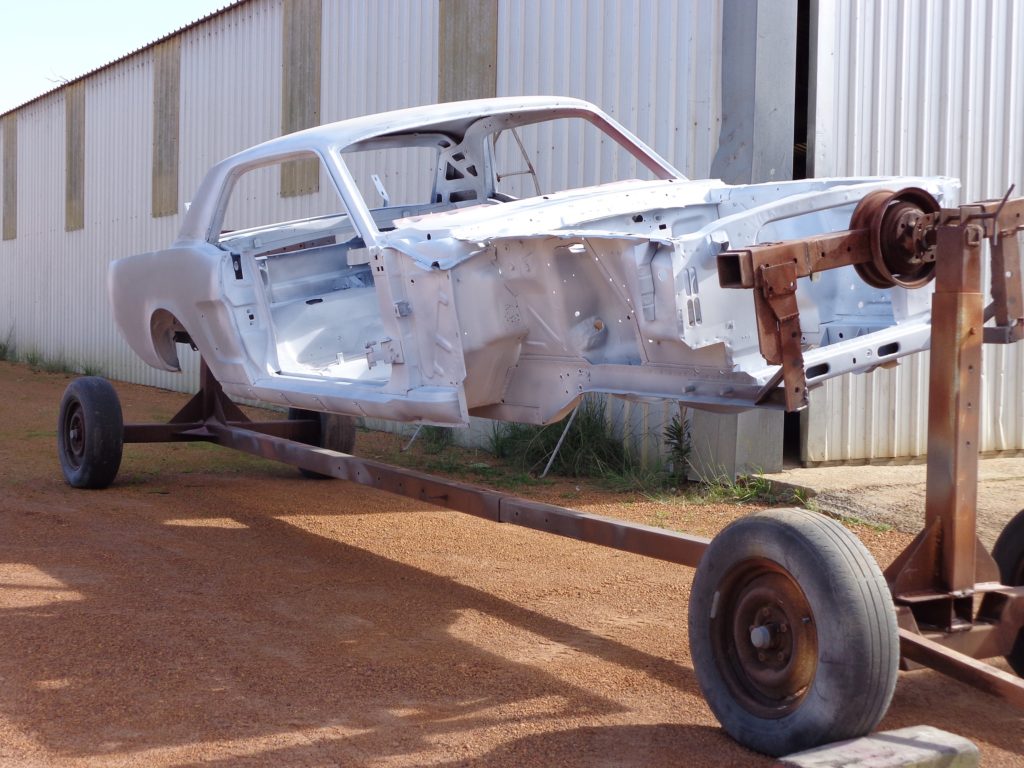 Stripped of paint and filler, the extent of the ‘damage’ could be measured. Do we stay or do we go? We opted to push on.

I was in too deep.  I had paid over $20,000AUD for my Mustang so the show had to go on.  Added to this, the car had provenance, apart from being an original Ford Australia Mustang, the first owner was and Australian touring car champion (who, for the time being, shall remain nameless).  Joe said “it’s not going to be cheap, but you will have a brand new body.”  That was enough for me, “let’s get cutting.”

The body was welded to a sturdy steel base to prevent it folding in half as we cut it down to a mere skeleton.

Then we went into Joe’s office and he opened up Mustang body parts supplier and began clicking on the pieces we would need;

That was just to get us started, there would be a few more panels yet before the project saw a primer coat.  Joe simply looked at the price of the panels and said “I can’t fix yours for that,” as he clicked each panel into the computer shopping basket before heading back into the workshop to begin cutting all the pieces or junk metal from the body. 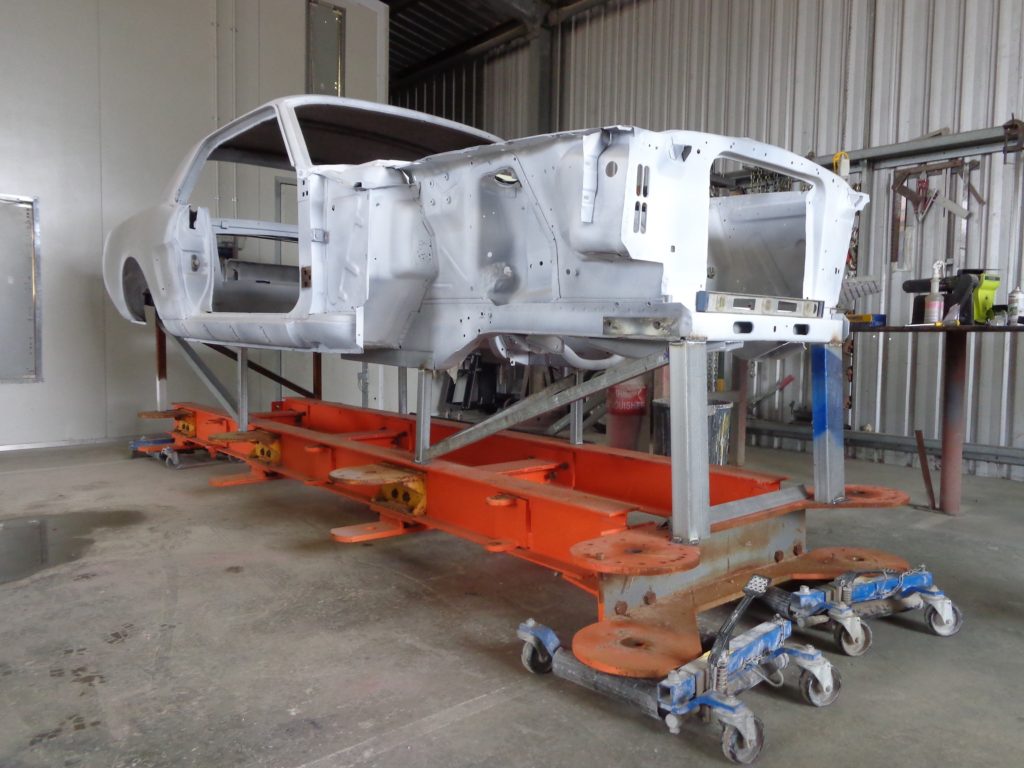 Before getting started, it was necessary to secure the body to a firm base. We were about to remove so much metal from the car it would collapse had it not been properly braced and secured.

After a lesson in the art of cutting spot welds off a seam, Joe handed the oxy torch to me and I got to work cutting panels away.  It takes a deft hand to remove the top piece of metal without blowing a hole in the piece below.  On those early days I blew lots of holes in the metal that we intended to keep.  “Don’t worry, the first 15 years are the hardest,” Joe would say.

At this point, it is worth mentioning not every twisted, buckled panel was cut off the car.  For example, the C-pillars, the upright panels that connect the rear of the roof to the body, were heavily battled scared but I chose to leave them in place for a number of reasons.  Obviously cost is one part of it and the interior headliner will cover the damaged metal but, more importantly, the dents and crumples represent a life of hard living and hard driving.  Like the craggy face of a gold-miner who has spent a life under the sun, the character lines stay. 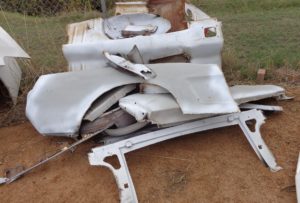 Just some of the parts that we cut off of the car.

Elsewhere, at the front of the car, the workers carrying out the left to right side conversion, hammered massive dents in the right shock tower and chassis rail so they could fit the Fairlane Compact steering box.  In anticipation of me fitting a steering rack, Joe said he would get rid of those dents but I insisted they remain.  These cars are part of the history of Ford Australia and are very rare.  Most of them have been fixed and improved as owners have sort to overcome the idiosyncracies of a fairly rough conversion, including me, however, it may be the case that someone in the future will wish to revert to the car to its original state so it’s important to make sure that’s remains a possibility.

A full discussion of the Homebush Mustangs can be found here ( https://motorshedcafe.com.au/the-homebush-mustang-story/).