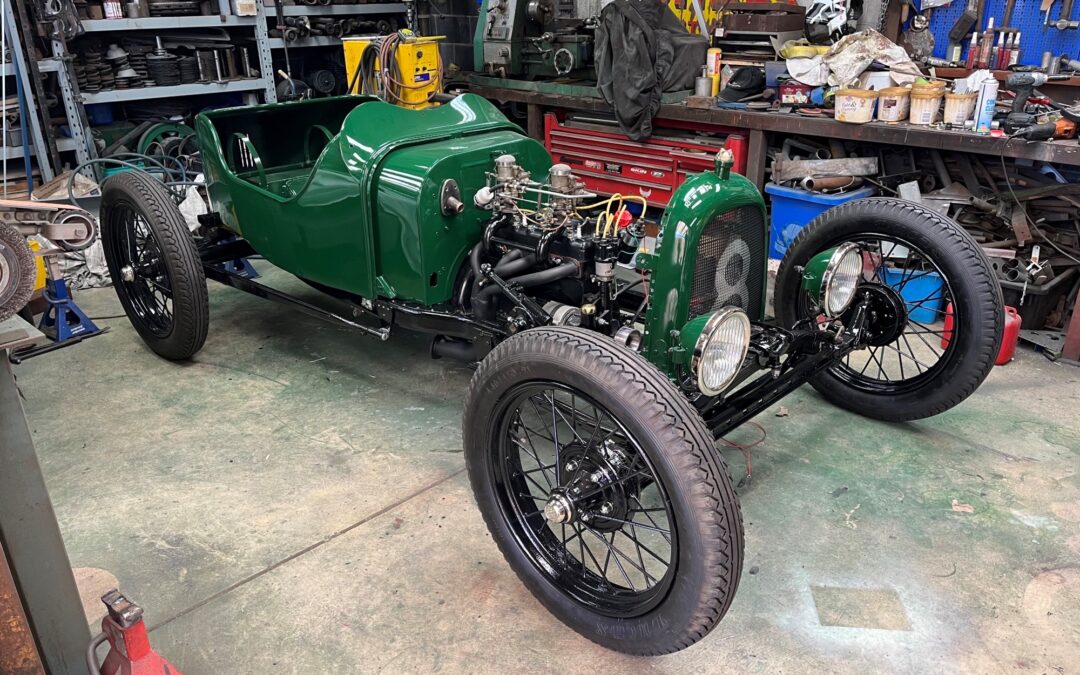 Things in Graeme’s shed have been developing rapidly since last we spoke: we have life.  Sure, it was only a momentary wail in response to a Bendix slap on the buttocks, but just like a parent hearing the first cry of their child, it gladdened the heart of all those present. 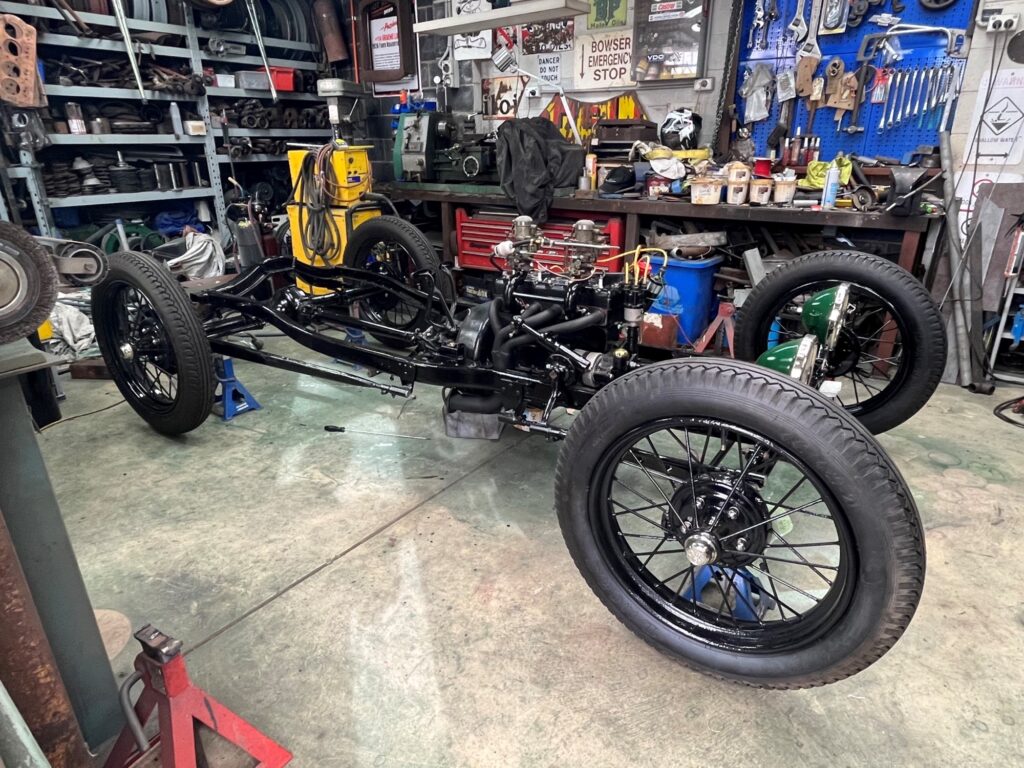 The skeleton, with it’s beating heart, is ready for the body.

There was no cranking, and no extra priming of the twin Stromberg carburettors.  The electronic fuel pump chattered for a few moments as it pressurised the system then, as soon as Graeme hit the starter, the engine instantaneously burst into life, surprising all those in the shed.  That surprise was replaced by deep satisfaction as the 3-litre side-banger, four settled into a contented purr.  Presently the exhaust is exiting the collector pipe without any hit of muffling.  This is how the car will run at Perkolilli however the beautiful burble will be too much for road use. 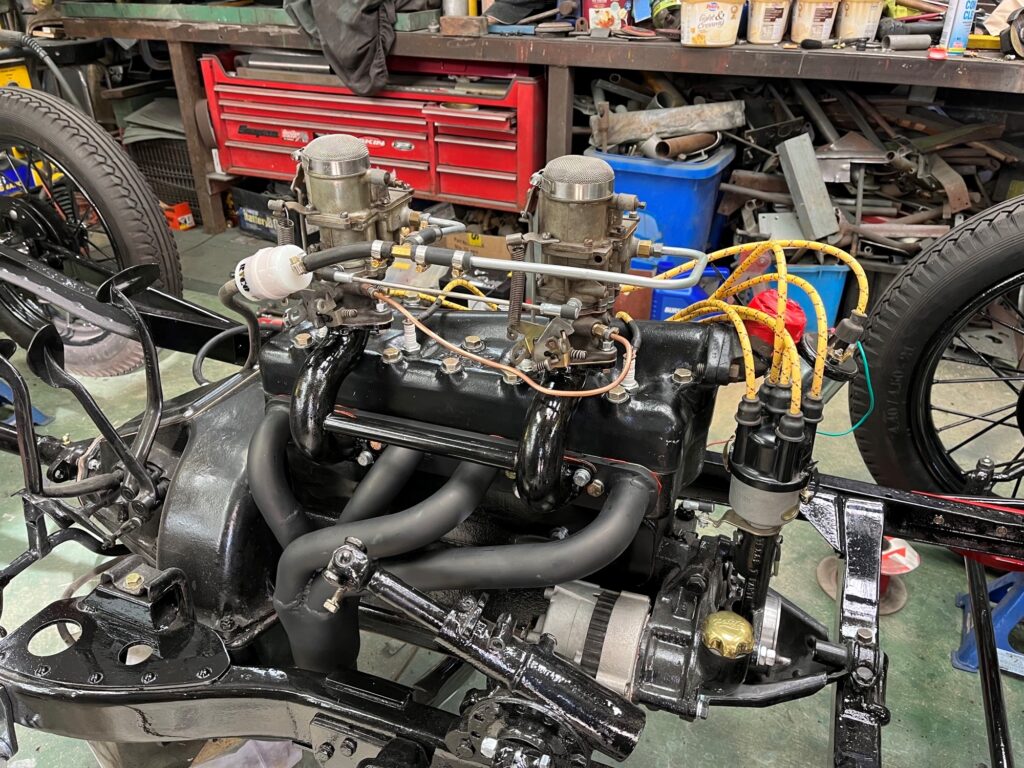 With no radiator, the experiment was brought to a close very early to avoid cooking the engine, but not before we captured a second burst on video for posterity purposes.

Of all the stages of a build, there is none as significant as a start-up.  A major developmental signpost has been passed and the project can move to the next phase.  In our case the body was reintroduced to the chassis.  This can be achieved by two people, however, there were three of us and we got the body on without causing any scratches.  It was at this point where the contrast between the black, heavy-metal chassis and the green of the tinware body, each perfectly complimenting the other. 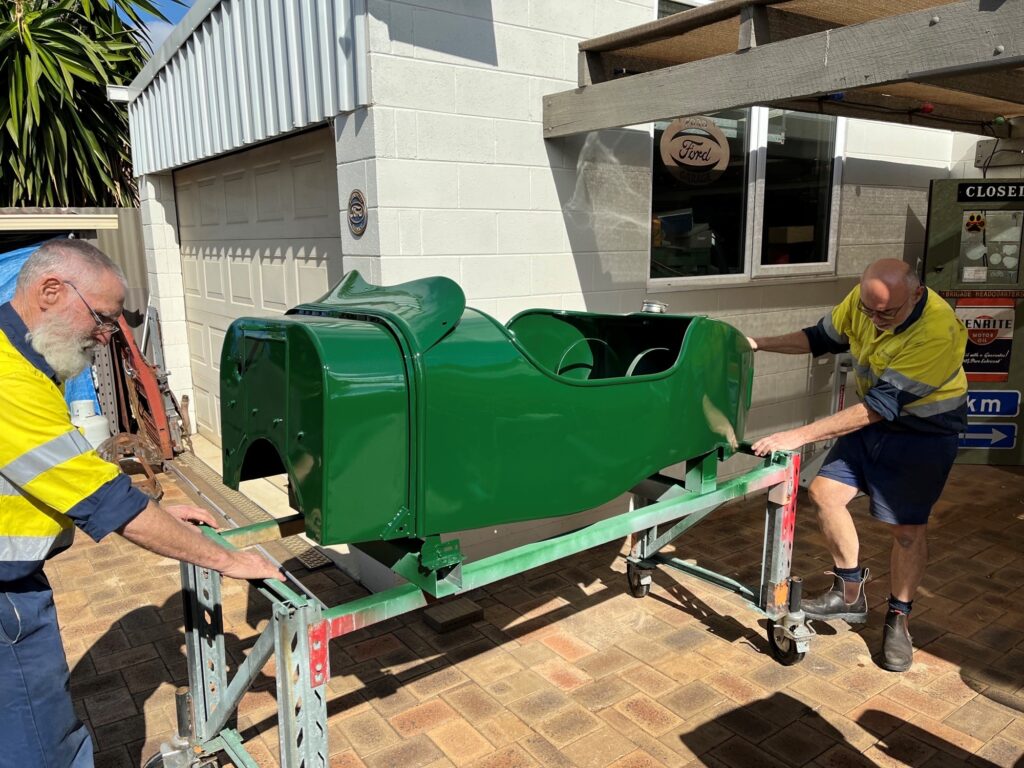 The newly-painted body is wheeled into the work area ahead for being lifted back onto the chassis.

With the body permanently back in place (LOL), we set about test fitting other body items and within an hour the skeleton and its beating heart were transformed: a stunning green racing machine was revealed.

Recall, we touched on the tuned state of the engine in the last piece on Green T?  The mods included an early veteran T high-compression head.  Well, as Graeme says, you can’t always trust 100-year-old cylinder heads.  A few days ago, whilst working on the engine, Graeme noticed an unusual mark on the side of the head.  Instigation and a bit of digging revealed a large rust hole.  The head was removed and replaced with a very special, and very rare Ward’s performance alloy racing head, cast in Perth by Allan Ward.  Graeme has been saving this one for a special occasion.  Evidently, its time has arrived.  As Graeme says, “that should make this puppy really go.” 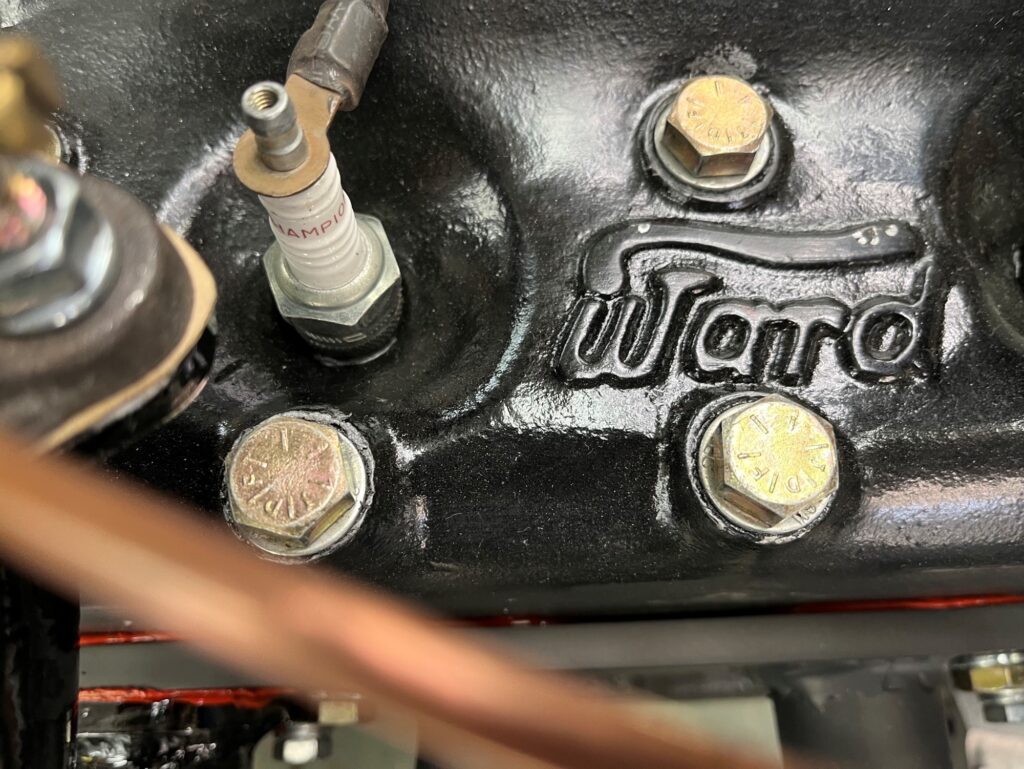 Finally, before we leave this piece.  For some years I have frequently mentioned Lake Perkolilli in the context of a motor racing circuit.  I recently came across a passage written by WA Police Pioneer H.E. Graves, who, in 1929, came across the lake on one of his patrols out of Kalgoorlie.  Graves describes Perkolilli as, “Surely one of the world’s smaller wonders.  Imagine a country dense and chocked with that low, grey-green growth; bridle tracks worming through, an occasional lizard the only company. Out of all this the lake suddenly breaks.  It is a huge, roughly circular area of clay.  At its edge most unaccountably all vegetation sharply ends.  The land becomes dead.  The surface of the clay is utterly flat, glass-like, smooth like a mirror.   Painfully it reflects the glare of the sun, so that the beholder blinks from its sheen. There must be salt or poison in the land to produce that shining sterility” (Graves, p. 117-118, 1937).

For a more contemporary description, we turn to the Gold Region Tourism Organisation, “Lake Perkolilli is a unique, rock hard claypan which has been the location for many Australian speed records. It was almost forgotten until vintage motor racing enthusiasts returned to bring it to life once again. Lake Perkolilli comes to life before dawn when the coffee p ots start boiling and the smell of frying bacon starts wafting across the camping areas. There is always someone who starts an unmuffled car or bike engine to break the silence. Aah, the music of motors to wake the late risers!” 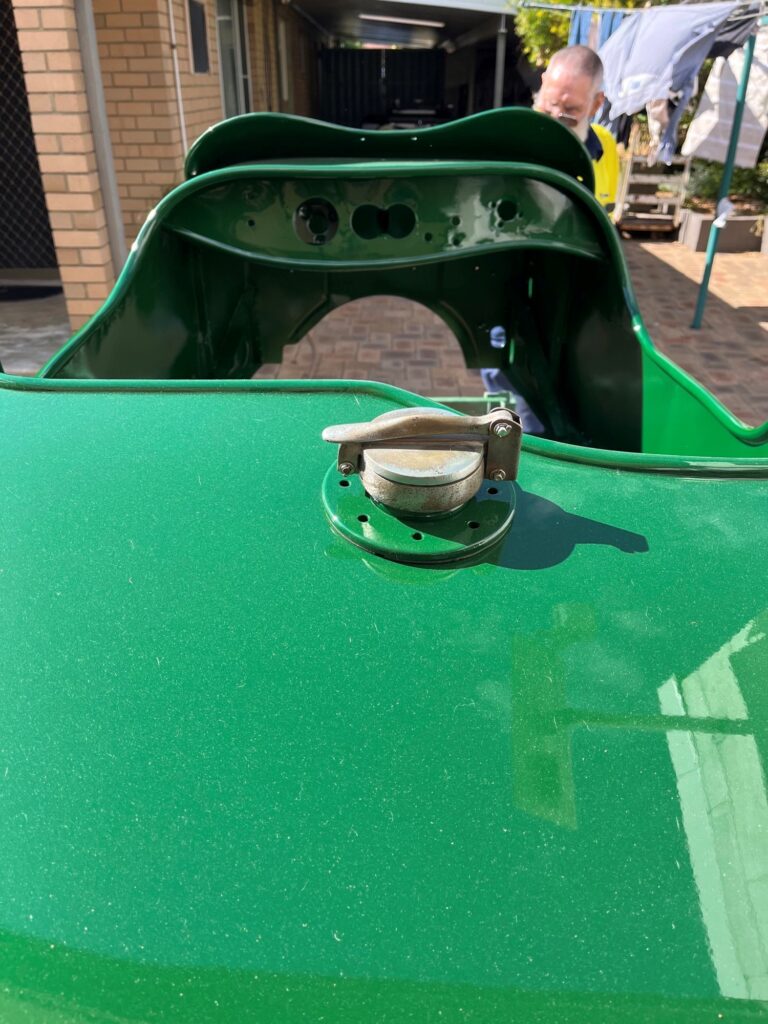 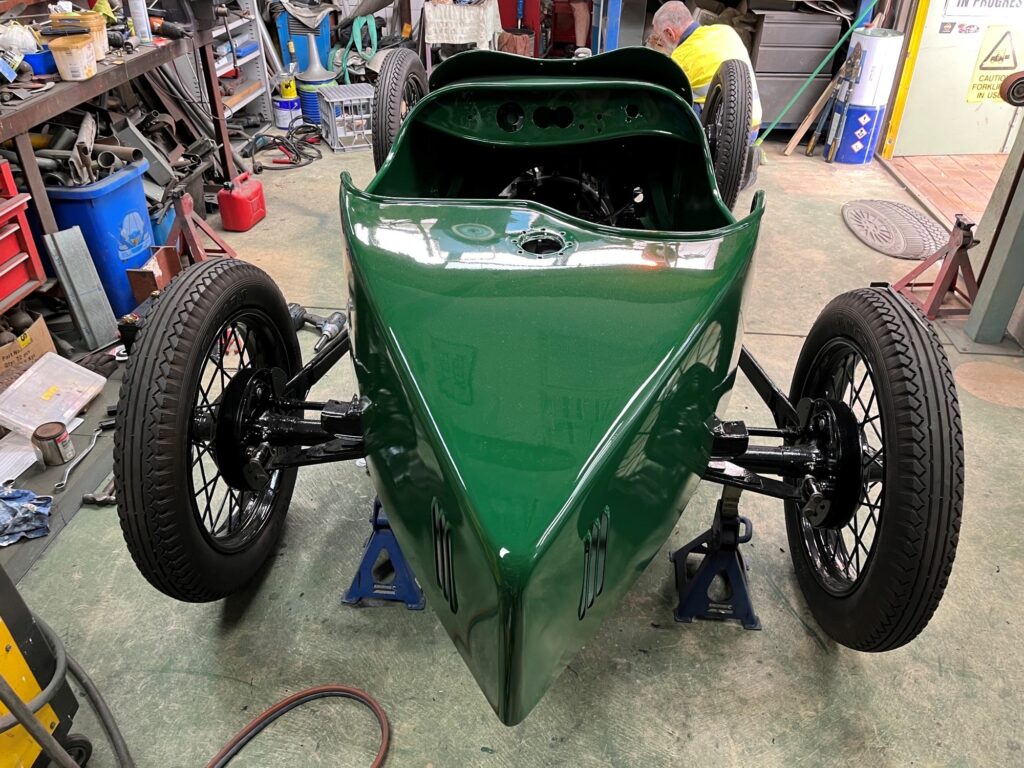 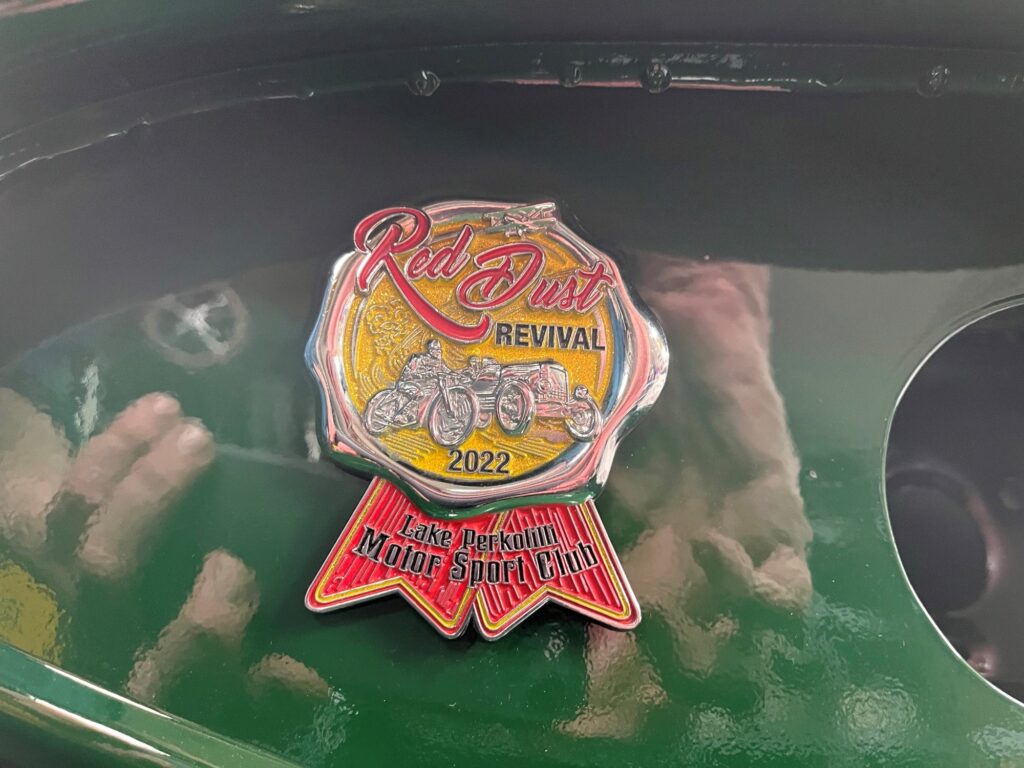 The Red Dust Revival 2022 medallion has been cast and is proudly displayed on the dash of Green T.