Out little race special is rapidly taking shape at the hand of master body-builder and engineer, Graeme Lockhart.  In fact, it has actually taken shape – past tense.  There will be no more cutting, welding, persuading or moulding of the body because it now has a lush coat on British Racing Green – again, by Graeme.  Added to this, the chassis has also been treated to a protective coat of POR15.

The engine is back in the chassis and will remain so for now as that too is finished and, barring catastrophes, it will be a goer.  Twin down-draft Stromberg carbs, increased compression and custom-made (ie Graeme-made) headers will see the one-hundred-year-old engine produce almost twice the original horsepower.  Although, I should add stock was only ever 20 horsepower.

I’ll let Graeme describe what he’s done, “It has high compression pistons and is fitted with an early veteran T high compression head, up from 4:1 to probably 5.5:1.  The engine now has 0.030 over-size bore and 12 kg off the flywheel.  The crank, rods and pistons have been balanced.  Ignition is by distributor and the camshaft is fitted with an aluminium timing gear – advanced 7 degrees.  But, apart from that, it’s all stock.” 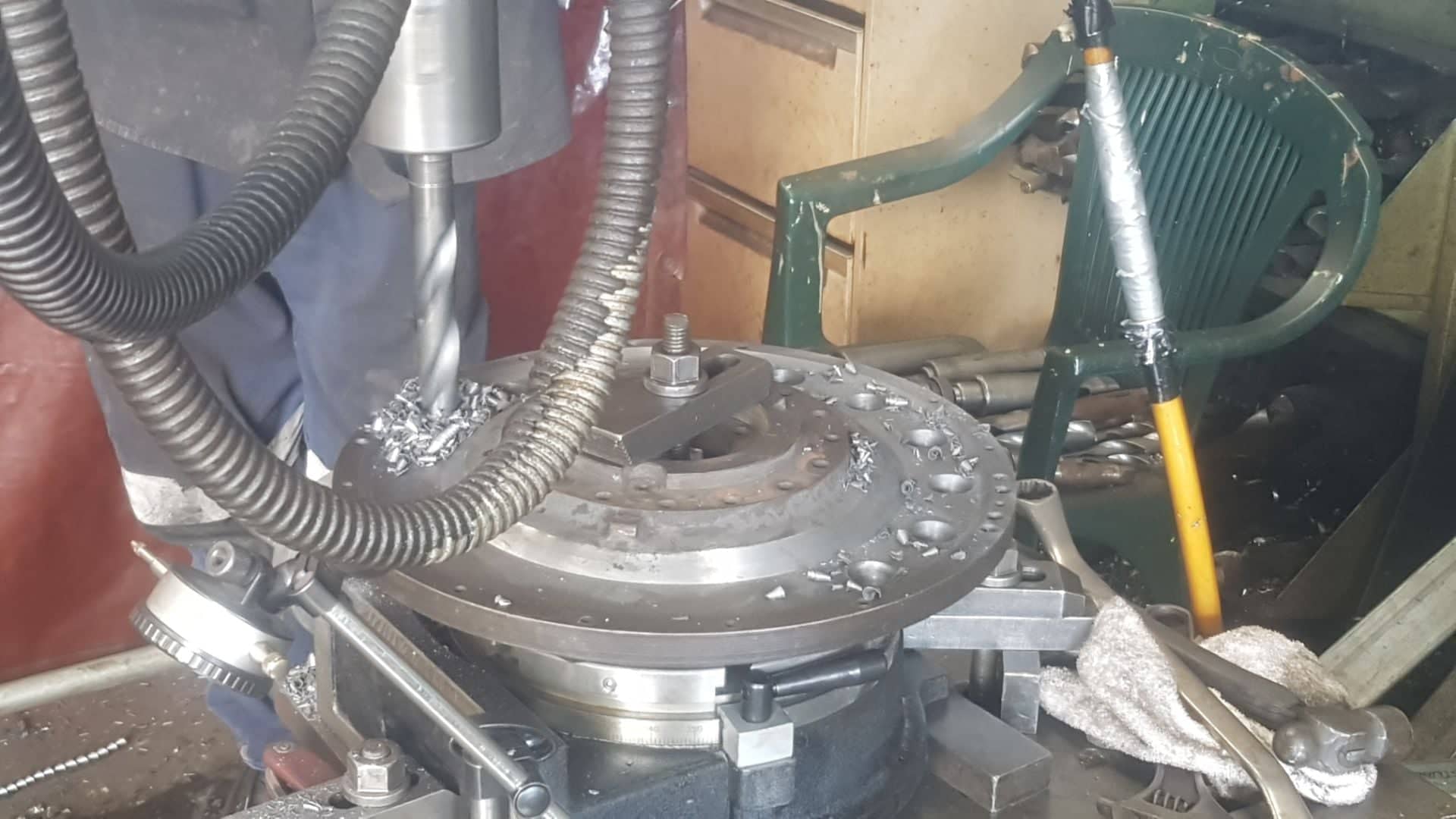 The heavy Model T flywheel has been relieved of some 12 kilograms.

As I said previously, the trick will be to use the extra power without breaking the crankshaft, the Achilles heal of any hot Model T engine.  Then there is getting the power to the rear.  The transmission has been rebuilt with new bushes and, where possible, modern materials that will add a touch of reliability, such as kevlar clutch bands.  The flywheel has oil slingers added to force oil back to the front of the engine (recall these old engines didn’t have an oil pump, they were lubricated by the crank splashing through the oil in the sump).  Graeme has added an external pipe to transport the captured oil forwards and thus aid in keeping the moving parts moving. 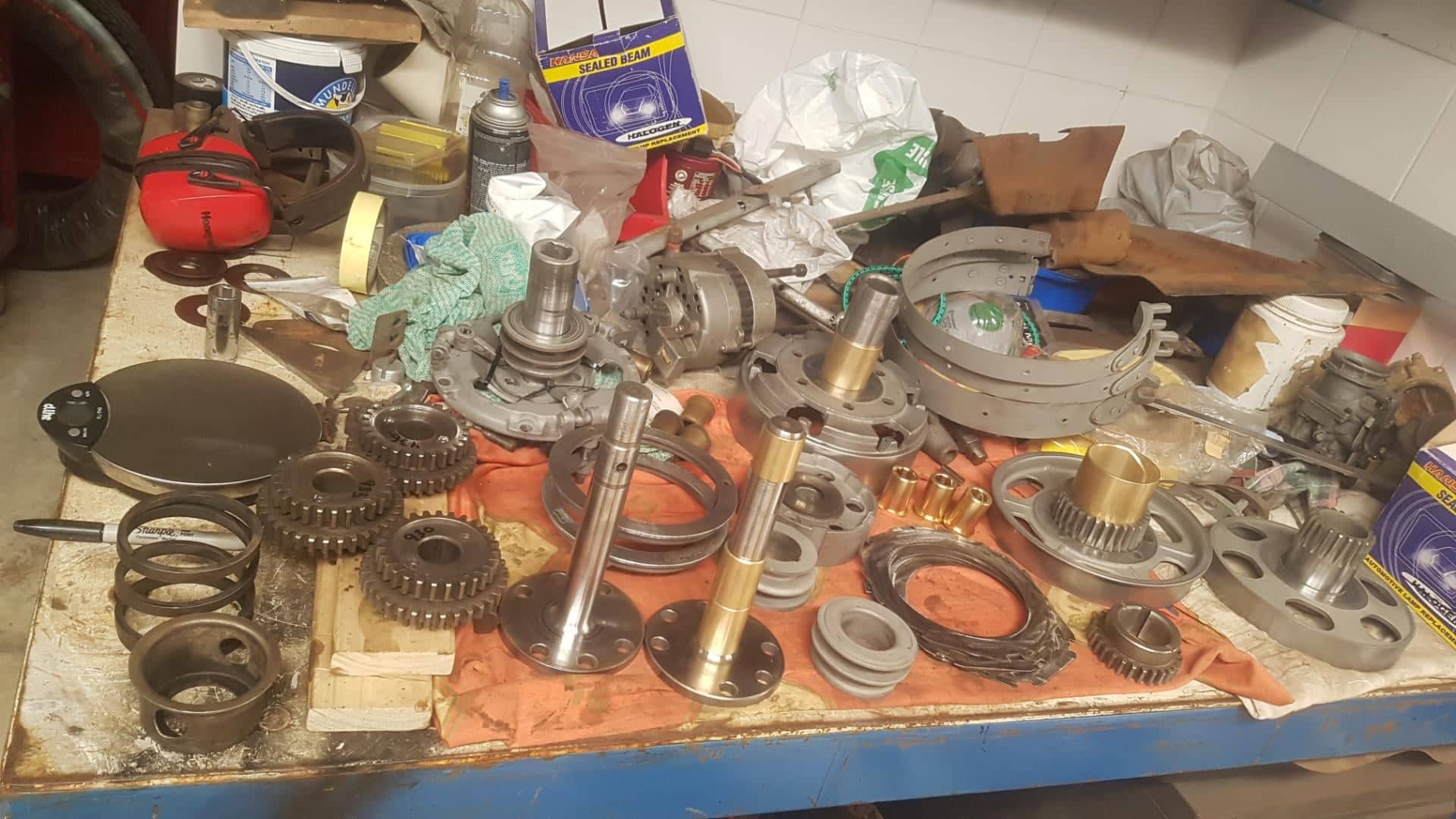 In this state, the Model T transmission looks much more modern than its 100-plus years.

The final drive has been rebuilt using a high-speed, racing crown-wheel and pinion that raises the final ratio to 3:1, instead of the standard 4.4:1.  This sounds counterintuitive but essentially, the lower the number, the higher the ratio.  With a higher ratio the engine turns less per revolution of the wheels and we go faster.

So, what does all this mean? In a nut-shell, this will be a period race car that goes as good as it looks.

The following montage will run from most recent to early stages of the build.

High compression pistons protrude into the combustion space and will add some much-needed horsepower to the ancient engine.

The first coat of the lush British Racing Green has been applied and looks amazing. It will almost be a shame to cover it in red dust!

The engine is back in the chassis and there it will stay, subject to continued good running.

Twin down-draft Stromberg carbs and hand-made headers are just a couple of mods that will add to the power output. A distributor has been fitted, negating the need for the old Ford trembler coils. 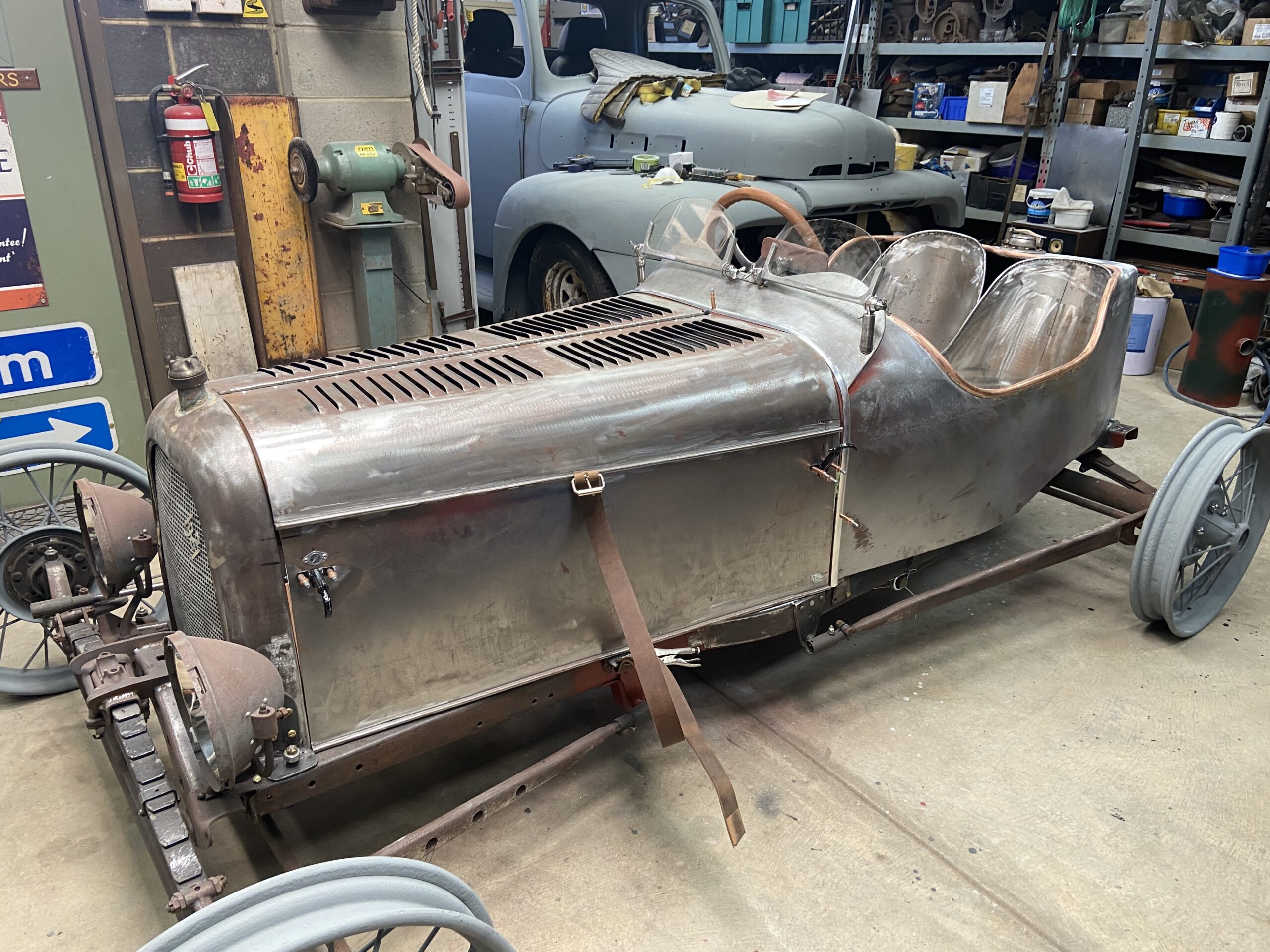 Just to revise where we’ve come from. 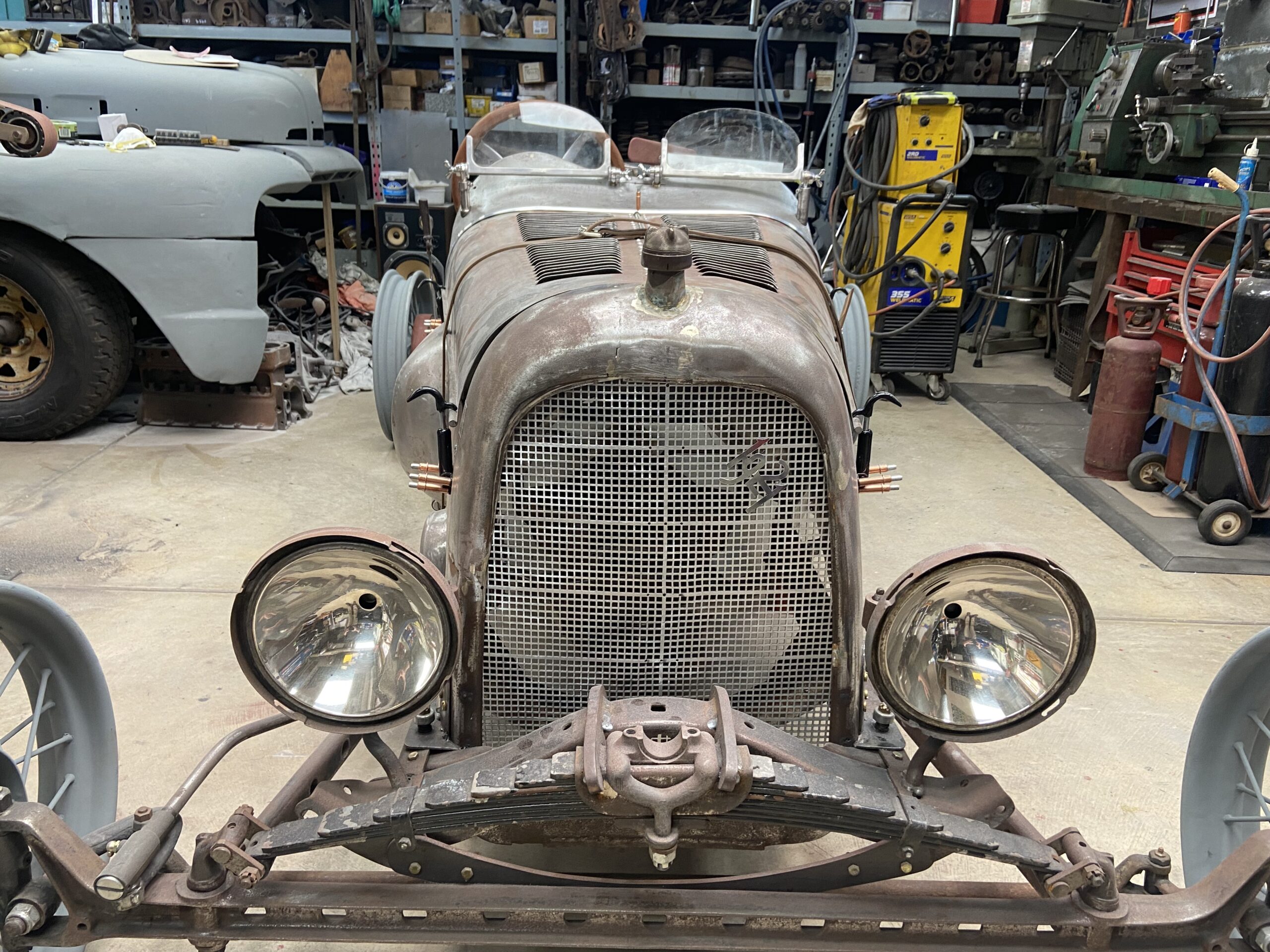 Seats have been fabricated completely by Graeme. 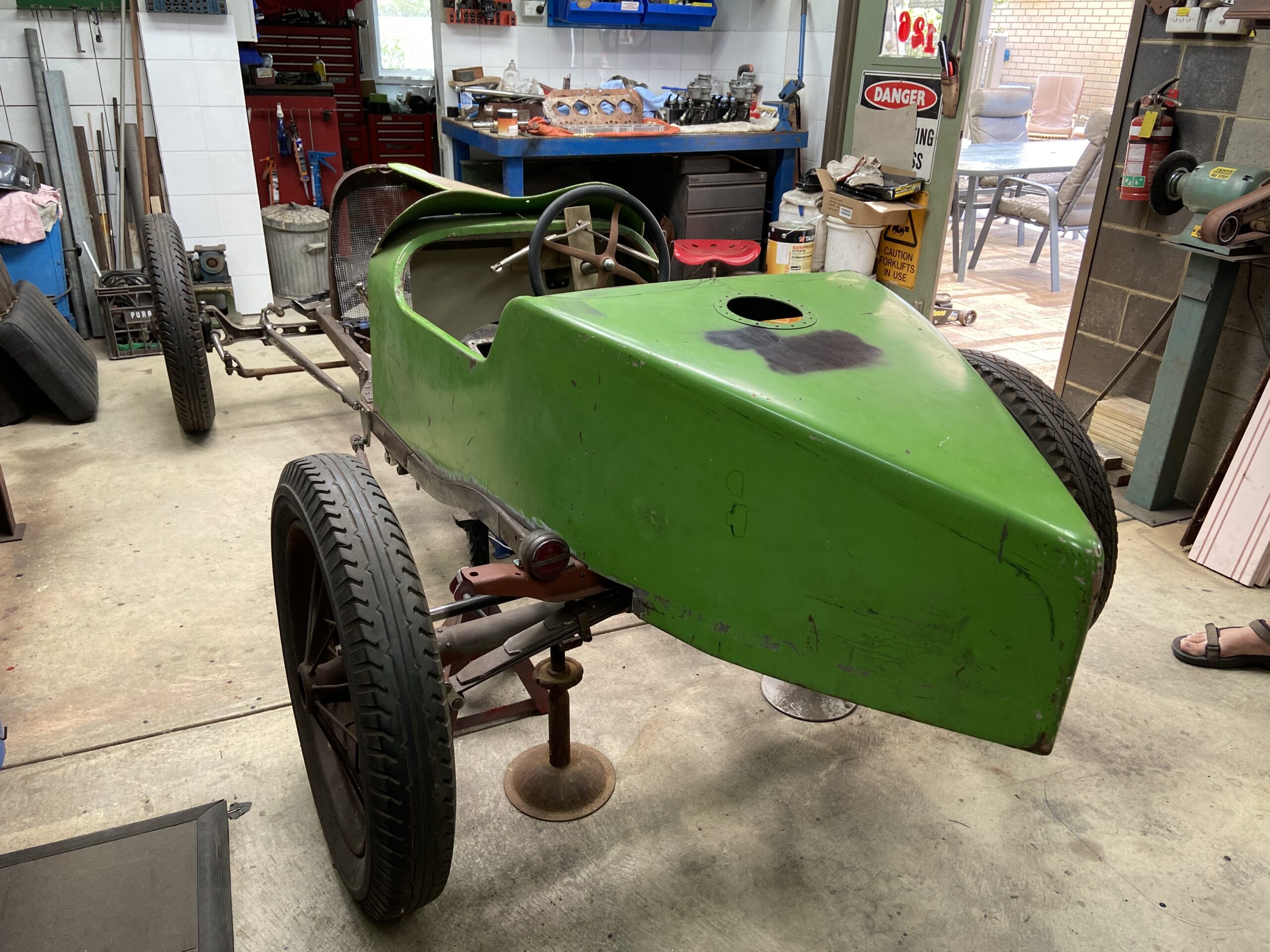 An early graft of the body, prior to it being widened – twice.