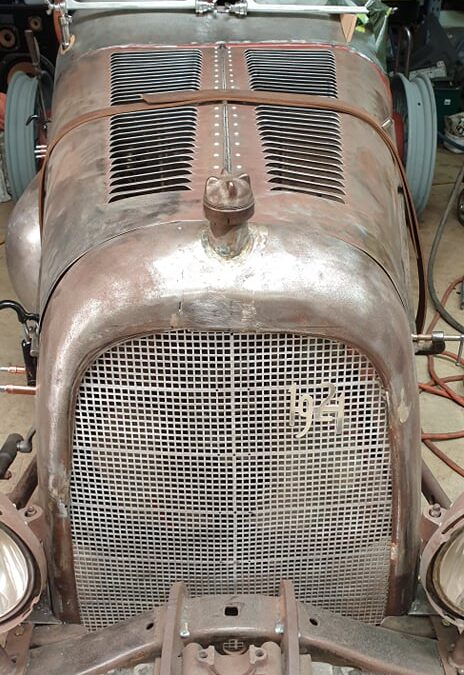 It’s over six months since we introduced Green T to the world.  Standing in front of the car this week I couldn’t help but marvel at how Graeme has made the body wide enough for two grown humans whilst, at the same time, expressing an aerodynamic flow that was only beginning to evolve with the race cars of the twenties (that’s the nineteen-twenties by the way, 100 hundred years ago).

Recall Green T’s body first saw service on a 1922 or 1923 Aston Martin.  The chassis on that car was numbered 1927, which is not the actual year of the car.  It’s believed to be one of only 11 ‘short-chassis, Aston Martin race cars, which naturally makes it an extremely valuable piece of world motor racing history. That said, the car is believed to have had some four bodies during its lifetime in Australia, the one used by Graeme being removed when it was brought to WA in the early eighties. The original body would have been aluminium and the car has since been returned to such.  The steel body, that was removed from the car continues to be molded by Graeme as he grafts it to the 1921 Ford Model T chassis.  Graeme has shaped the metal according to his own design, aided along the way with lengths of plastic conduit, cardboard and a healthy dash of creativity. 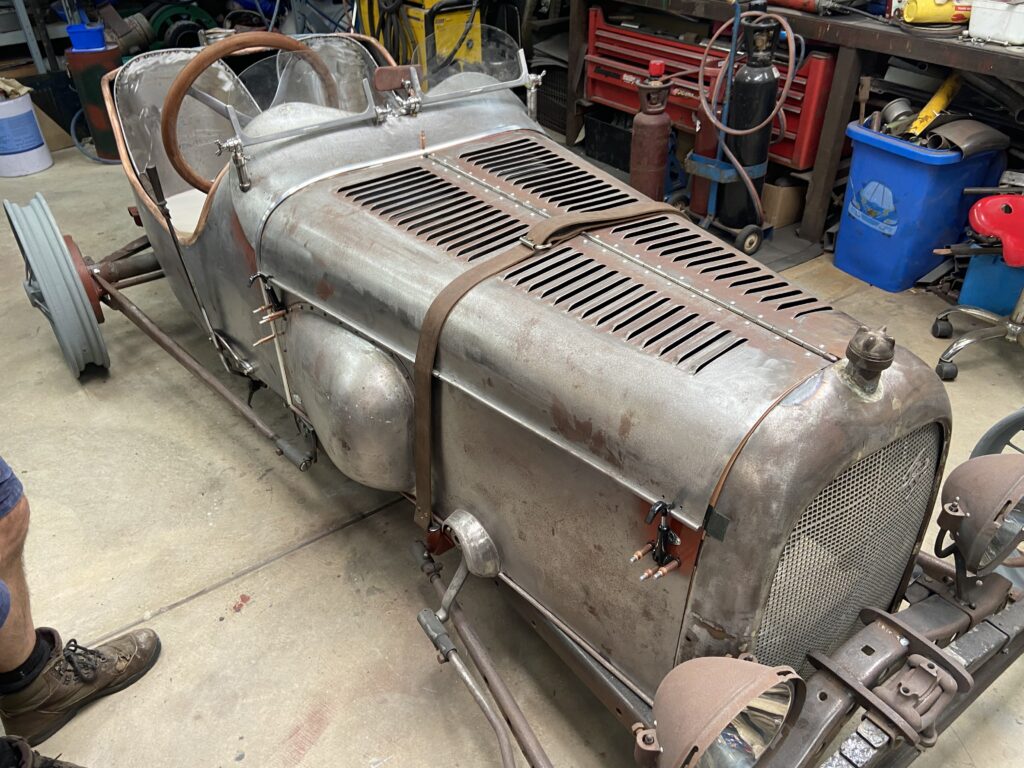 The bonnet is so long a straight eight could go in there.

Quietly sitting in a corner of Graeme’s shed, the engine sits waiting to be introduced to the chassis.  Graeme estimates the rebuilt Canadian four-banger, with its twin Stromberg carbs, extractors and high-performance head, will be pumping out twice the original allocation of horses.  It won’t exactly pin the ears back, but we’re quietly confident 130 km/h will not be out of the question. If that sounds slow, remember front brakes weren’t really a thing in the twenties, nor were seat belts or roll-bars so 70 or 80 miles per hour will be plenty-fast enough.  Furthermore, we’ll be racing on the slick red dust of Lake Perkolilli so top speed will likely be limited by my in-built sense of self preservation (and a wife punching me in the arm). 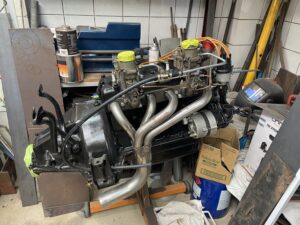 With the body nearing completion, Graeme has begun preparation for the paint.  I must say, one could almost seal the raw metal and present the car as she currently stands.  The old sheet metal, free of paint and rust gleams like is was rolled just yesterday. In a nod to the famous 1921 Aston Martin GP car “Green Pea,” Green T will be finished in British Racing Green.  One can’t imagine any other colour that would be remotely suitable.  Not only does British Racing Green look stunning, it has linage in that it is the international motor racing colour of the United Kingdom and has been the livery of Lotus, Cooper, Jaguar and, of course, Aston Martin.  It is the Aston Martin hue we are going for.

1921 marked Aston Martin’s entry onto the World Grand Prix circuit with a 1500cc, supercharged, all alloy engine that was lithe and powerful – for the era.  Green T, on the other hand, has twice the cubes with a 3 litre, normally aspirated, cast iron engine.  In typical American fashion, it pits size and muscle against technical sophistication, and comes off second best.  I will, however, challenge any casual observers to pick the multi-million-dollar car from the one created in a shed in Western Australia.  Such is the finish of Green T, it looks every bit the racing car it pays homage to.

This early picture of the project shows just how far Green T has come since Graeme first grafted the body onto the Model T chassis.

I would love to fit a supercharger to Green T but, the truth is, such a device would likely snap the crankshaft, which is already the Achille’s heal of warmed up Model T engines.  I suggested to Graeme I should perhaps invest in an aftermarket, forged steel, Scat crankshaft.  I had a bit of cash hidden away for a rainy day but then it rained cats and dogs.  My newly purchased kitten fell ill and consumed the greater part of my rainy-day fund. Any upgraded crank will have to wait until we break this one!  Challenge accepted. 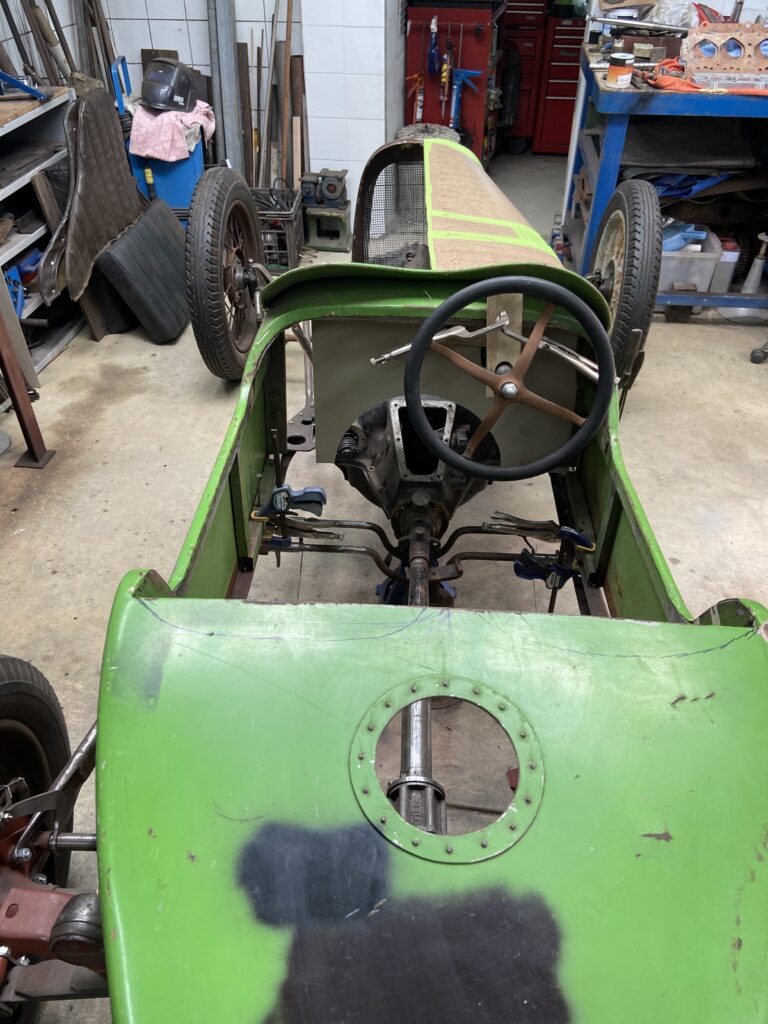 Introducing the Aston Martin body to the Ford Model T chassis. Note how incredibly narrow the driver’s compartment is. 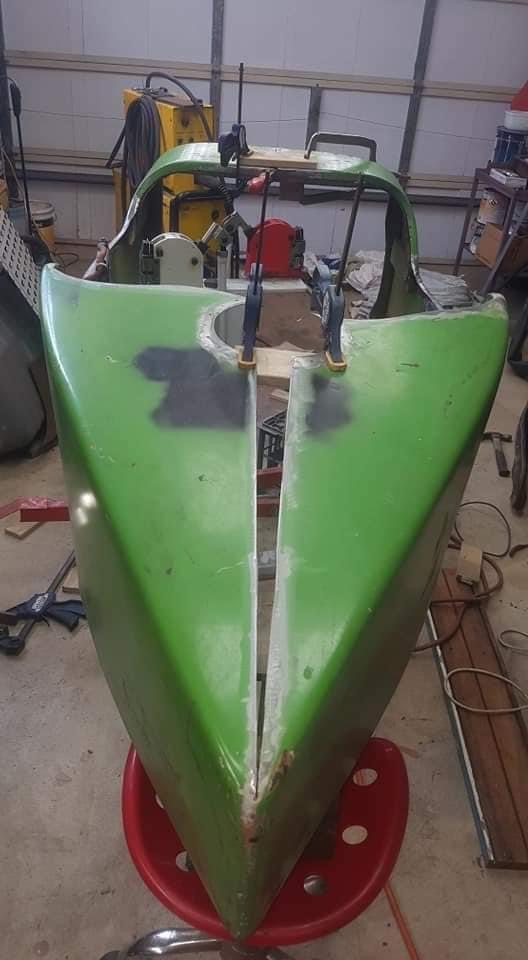 This was Graeme’s first go at making the body wider. 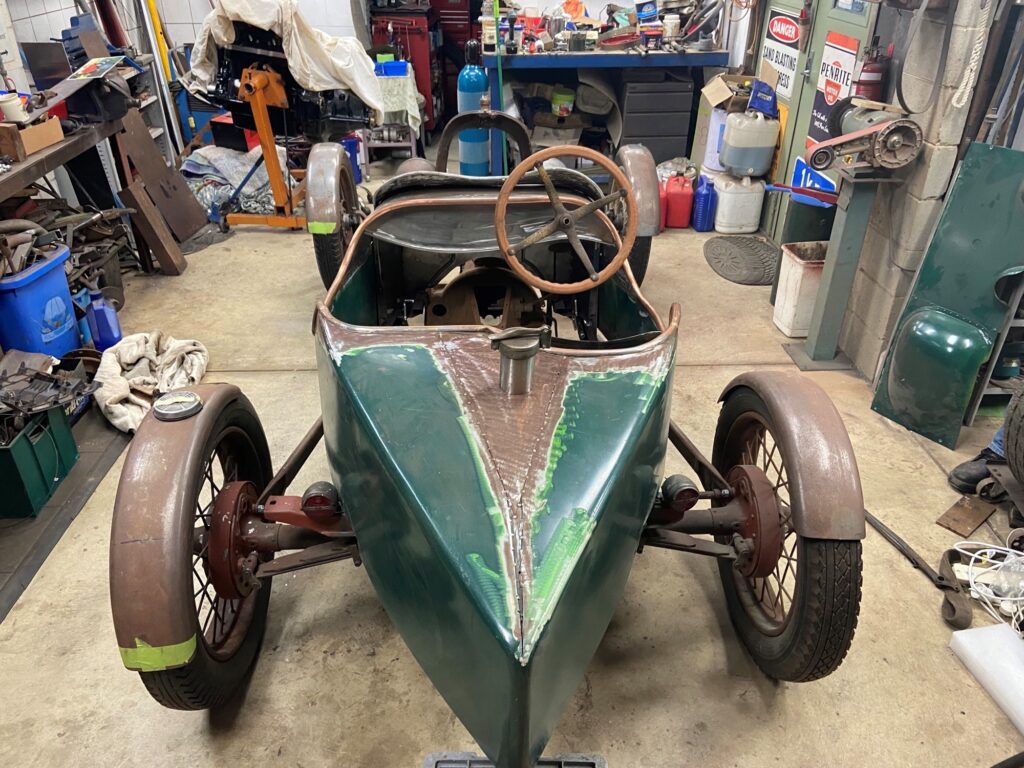 Attempt number two, and there we have it, a car wide enough to fit two grown-ups. Subsequent to taking this photograph Graeme has gone to considerable lengths to lift the plenum and shape the mid-section, whilst retaining and even improving upon of the sleek lines of the Aston. 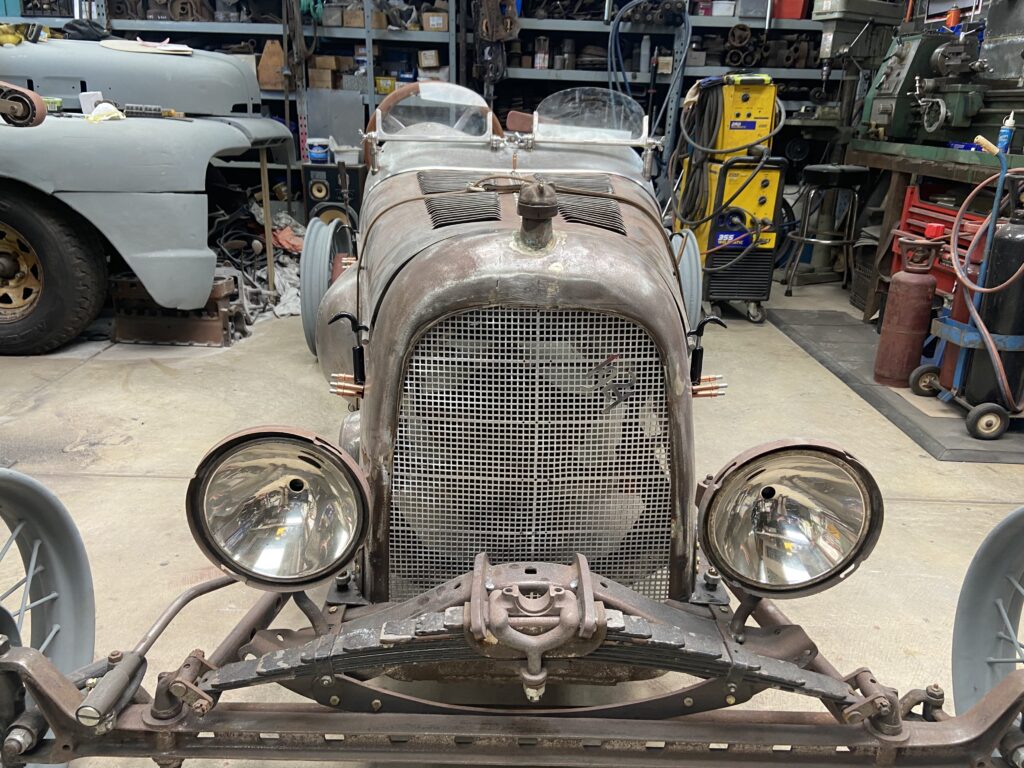 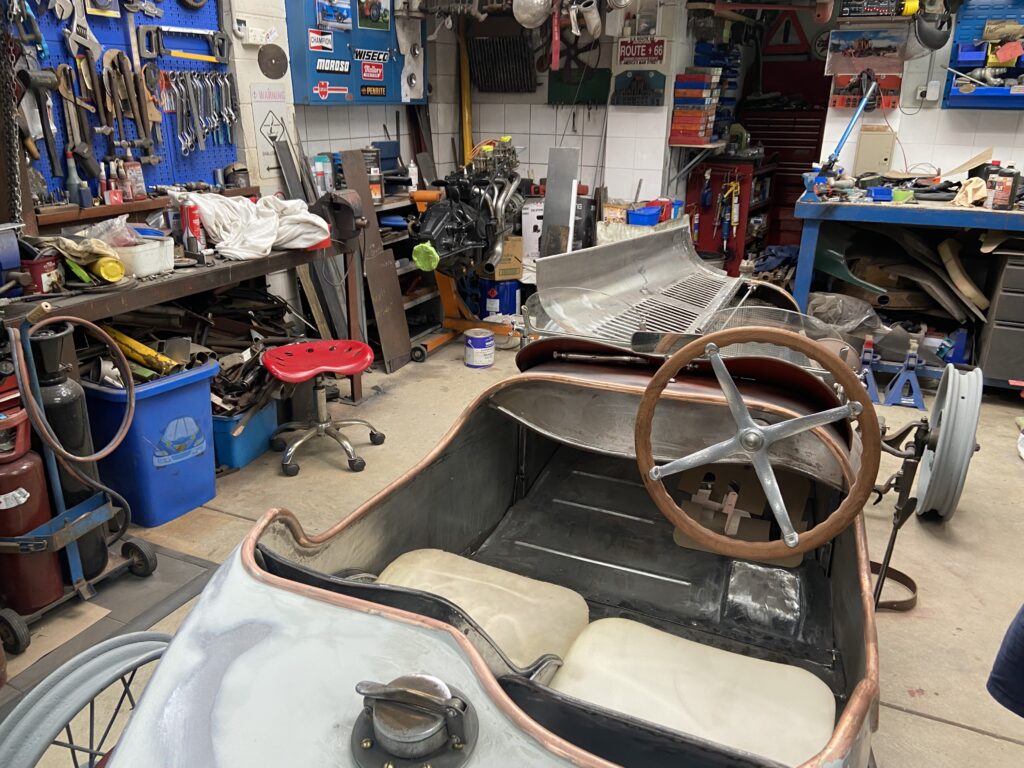