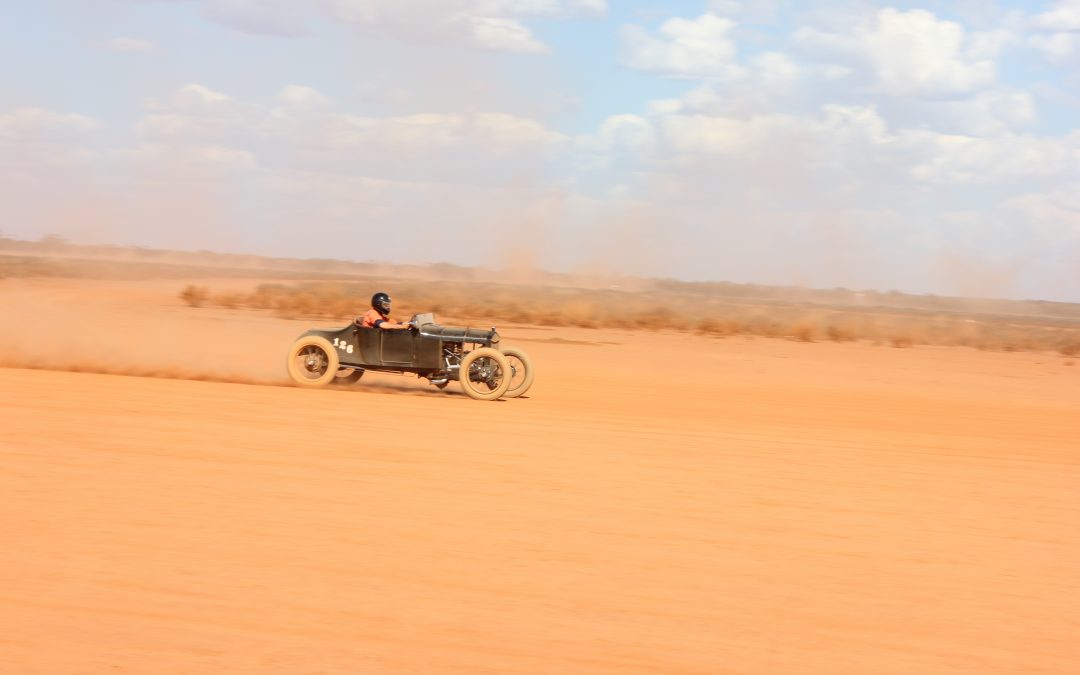 Some time ago, actually, a long time ago, I wrote a piece about a race car intended to hit the red clay pan of Lake Perkolilli that was under construction by my friend Graeme.  In the story I promised to revisit the car when it was finished.  I didn’t.  Let me finish it now and also introduce the next car under construction by Graeme.

Both of these cars are based upon the Ford Model T platform.  Graeme loves the Model T with a passion.  He is also a qualified mechanic and somewhat of an amateur engineer.  Add a dash of artistic flair and you can begin to appreciate the skills this man possesses.

So, back to Graeme’s black T.  Graeme’s racer was created in the format known as a “Gow Job,” which apparently comes from “gowed up” (Hiedrick, 2014).  These home-built speedsters typically started with a Ford 4-cylinder, presumedly due to the ubiquity of the humble Model T.  Hiedrick states these engines had a top speed of 55 to 60 miles per hour, which, as the owner of a veteran 4-cylinder Ford, I find rather ambitious. “To increase this top limit, a gow job mechanic would remove anything unnecessary – fenders, bumpers, windows – to improve the power to weight ratio” (ibid).

Last time we saw the black gow it was devoid of wheels and paint. To recap, the racer is powered by a 3-litre, 4 cylinder, mounted on an original Model T chassis that has been lowered some 10 inches.  As is often the case with projects from the distant past, Graeme only had bits and pieces of a body.  For the pieces he was missing Graeme used his unique CAD (cardboard aided design) templates to first fashion the required part and fit it against the body before creating the panel in metal.  All the bright metal in the accompanying photographs has been fashion by Graeme, by hand. 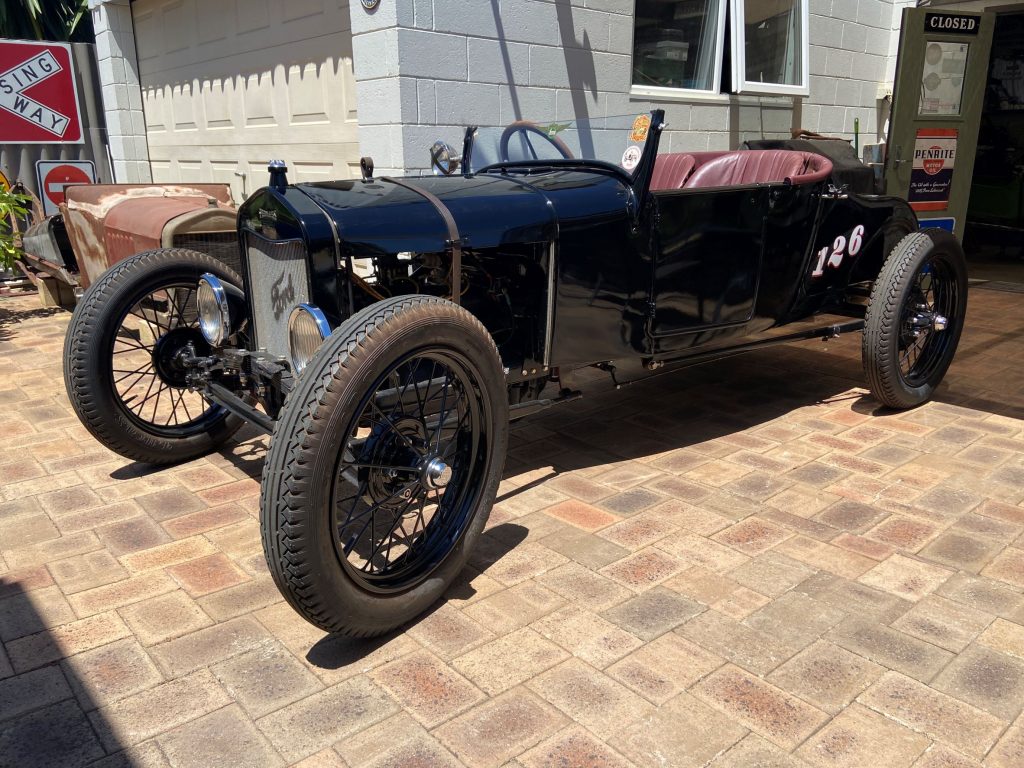 Here’s one he prepared earlier. Another journalist referred to this car as a “Gow Job” which sent me searching for the meaning of such a term. 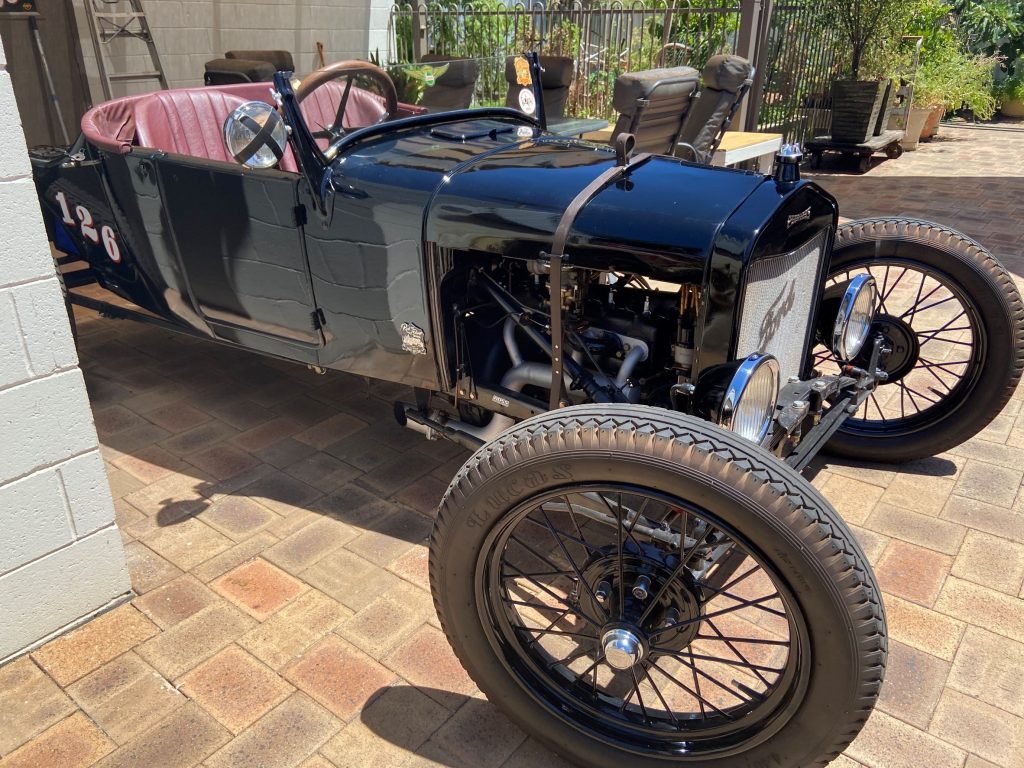 Beautiful from any angle.

Naturally, the black gow was finished and triumphed at the 2019 Perkolilli event. That event was covered by me in another publication (because they pay more than I do).  It can be viewed here.  The racer clocked a top speed of 126 km/h on the chopped up red dirt.  Not bad for an engine built in 1925 with 20 horsepower.  Graeme is going for broke now with an engine which he is hoping will yield a top speed of 160 km/h – which is the old ton, or 100 miles per hour.  The ton was quite elusive in the nineteen twenties so racers had to be resourceful to break it, frequently breaking the engine and/or car in the process.  In true racer endeavour, Graeme has built an engine which I suspect will give the ton a good nudge.  More about that engine later, for now we shall look at where the 2019 Perk engine is going.  Enter Green T. 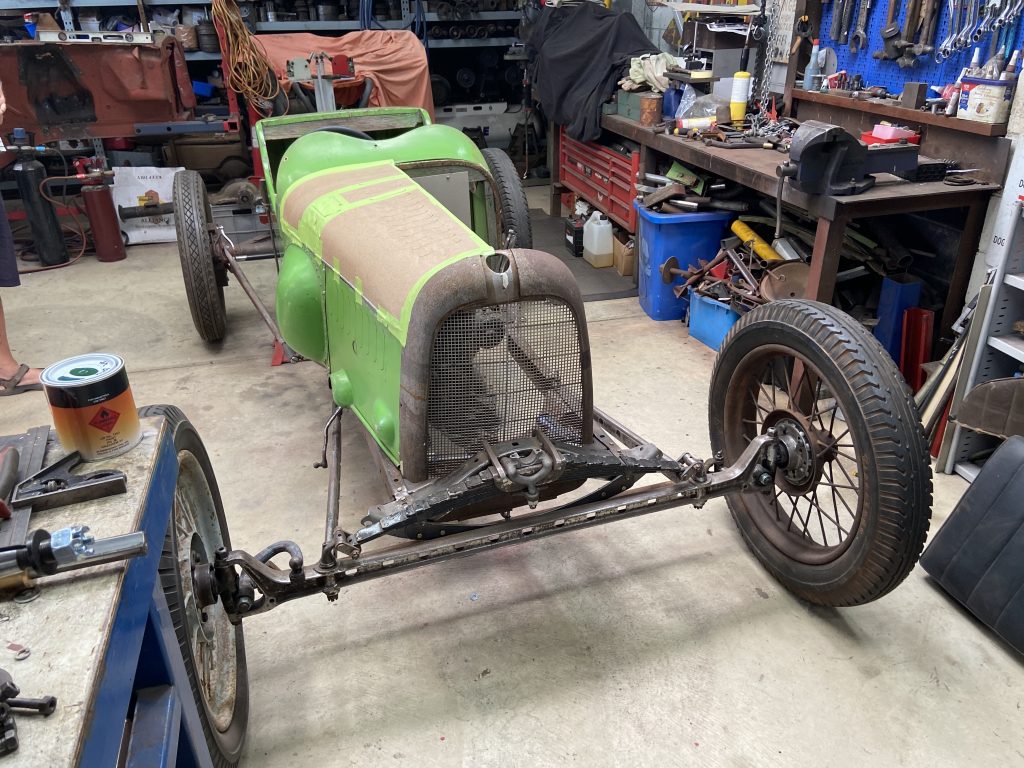 The narrow Aston body fits the Model T chassis quite nicely, although the cockpit remains a little cramped at this point. Note Graeme’s cardboard aided design. 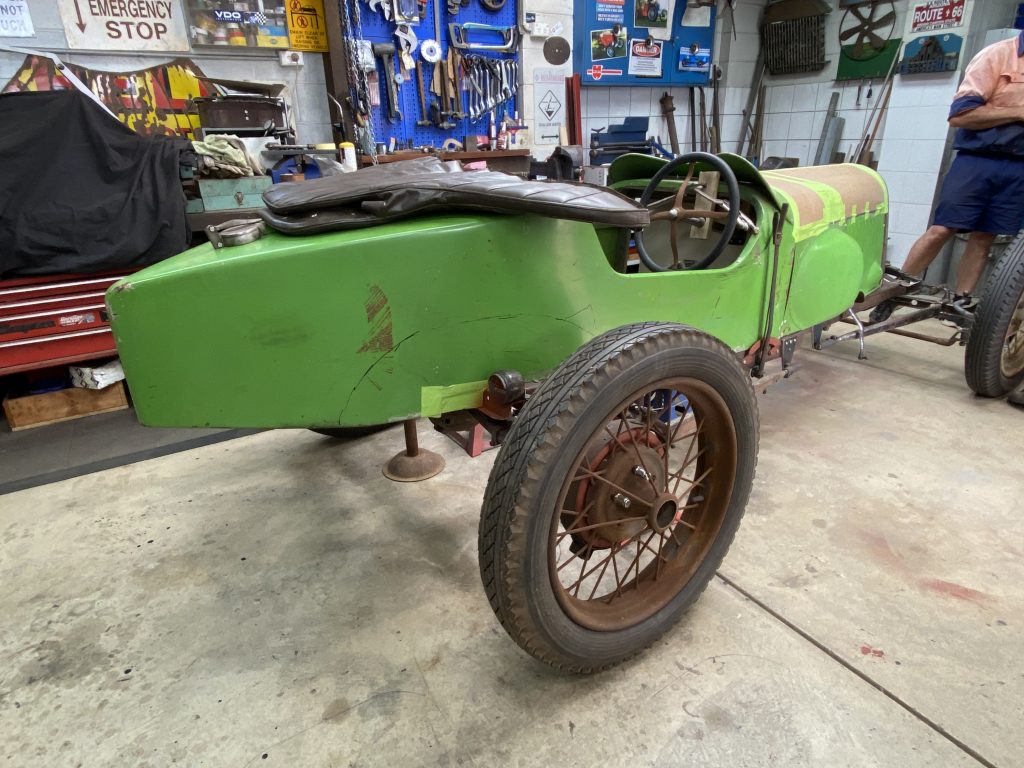 Green T started out, as the name suggests, as a Model T.  Actually, a conglomeration of Model T parts Graeme has collected over the past few decades.  A glace around his very well organised shed suggests he could build several more.  As alluded to above, the race-proven engine will be mounted into one Graham’s expertly fabricated, lowered and modified race chassis.  It will then be fitted with an Aston Martin body, more particularly a body from an Aston Martin.  It is unlikely the body was actually made in the Aston Martin factory but it has seen service on a very special Aston Martin racing car that was brought to Australia for the 1928 Australian Grand Prix.

The Aston was a lithe, alloy-bodied, open wheeler GP car from 1922 or 23 (it’s not exactly clear).  It was powered by supercharged 1486 cc side valve engine of Aston Martin’s own design.  Incidentally, Lionel Martin’s partner in their fledgeling automotive manufacturing business was Robert Bamford.  The name Aston Martin comes from a celebration of the success Lionel Martin enjoyed at the Aston Clinton Hill Climb in Buckinghamshire, England driving a car of his and Bamford’s creation.

The men went into production and began selling small numbers of their cars, possibly as few as 55, three of which are known to have been brought to Australia.  One of the three cars was purchased by Mr John Goodall and evidently had a successful history of racing in Australia, including being driven by Mr Goodall on the first Australian Grand Prix, a 100-mile event at the Phillip Island circuit in Victoria in 1928.  The car failed to finish in ’28 event but was entered again in 1929 and 1930, finishing third in the latter event, which by that time had grown to 200 miles.

In 1977 the car was purchased from the Goodall family by Mr Lance Dixon.  It turned out much of the alloy components of the engine had been melted down for armaments during World War II.  However, another engine, from one of the original three cars imported back in ’27, was located by Mr Dixon, powering, of all things – a boat.  The engine was fitted to the remnants of the Goodall car and a body was remanufactured out of steel.  The small race car remained with Mr Dixon up until 1982 when it was purchased by Mr Peter Briggs for display in the York Motor Museum and, later, the Fremantle Motor Museum.

Under Mr Briggs’ ownership the car under went a full restoration which included a new aluminium body.  The builder of the body flew from Perth to the UK with the sole purpose to measure and record one of the original GP Astons to ensure  authenticity of the reconstruction. 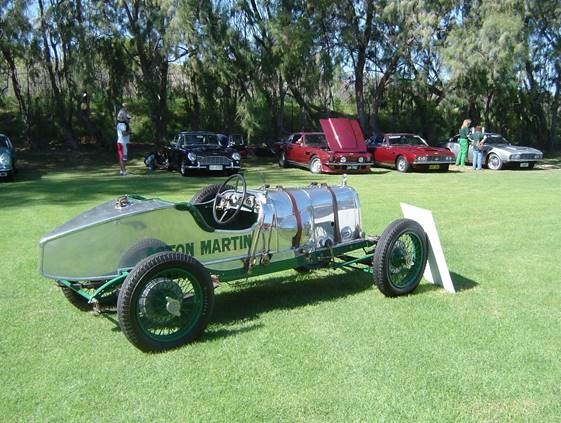 Peter Briggs’ Aston Martin after it had been returned the original style of the all aluminium body. Photograph by Mr Holger Lubotzki.

The steel body was stored first behind the York Motor Museum before being moved to the Veteran Car Club of Western Australia parts store in the Perth suburb of Wattle Grove.  And that’s where Graeme found it.  So, to take stock, we have enough parts to build another Perkolilli racing Model T, a body from a famous Australian racing Aston Martin and a very talented mechanic slash engineer.  Some twelve months ago, Graeme began construction of Green T, the name paying homage to another famous racing Aston known as “Green Pea.” 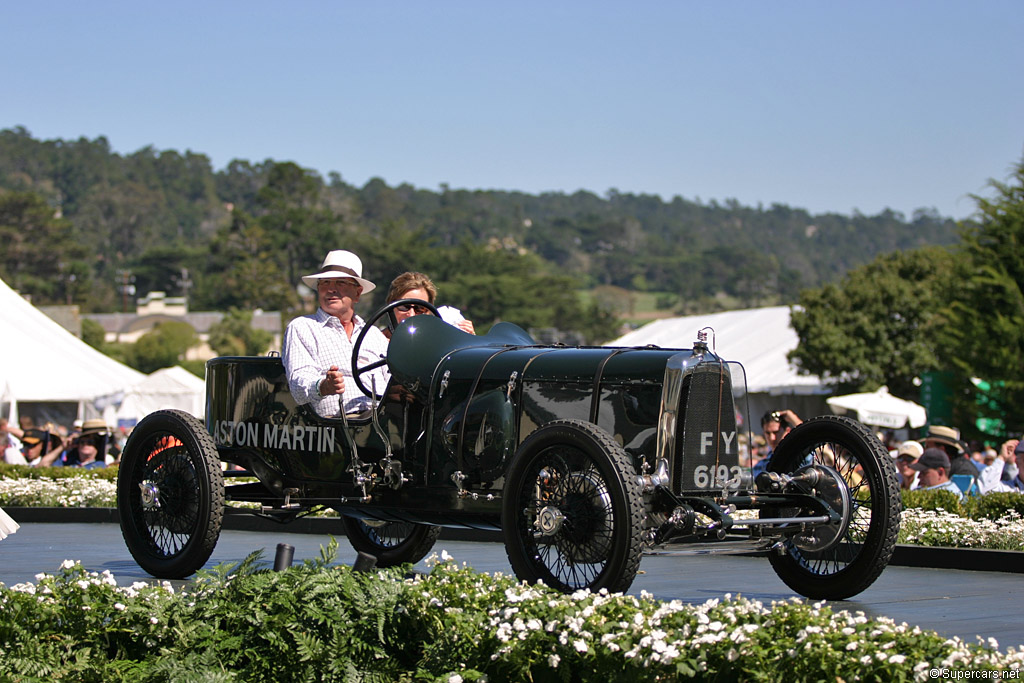 With the same owner now since 1958, this well-known 1922 Aston Martin is affectionately known as Green Pea. It is of similar pedigree to the car imported by John Goodall in 1927.

The Aston body T has been cut, tucked and moulded into the what is clearly going to be a very special race car.  To be honest, the body looked a bit odd on the Aston Martin chassis.  It sat up high, was cramped and carried odd lines that departed somewhat from the racing stance of the original Aston Martin machines.  Graeme has widened the car and remanufactured the cowl, both raising and lengthening it.  The result is two humans can now comfortably sit in the car (including yours truly who is 6’ 4” in the old scale).  These mods have added style and flair befitting a car of the era. 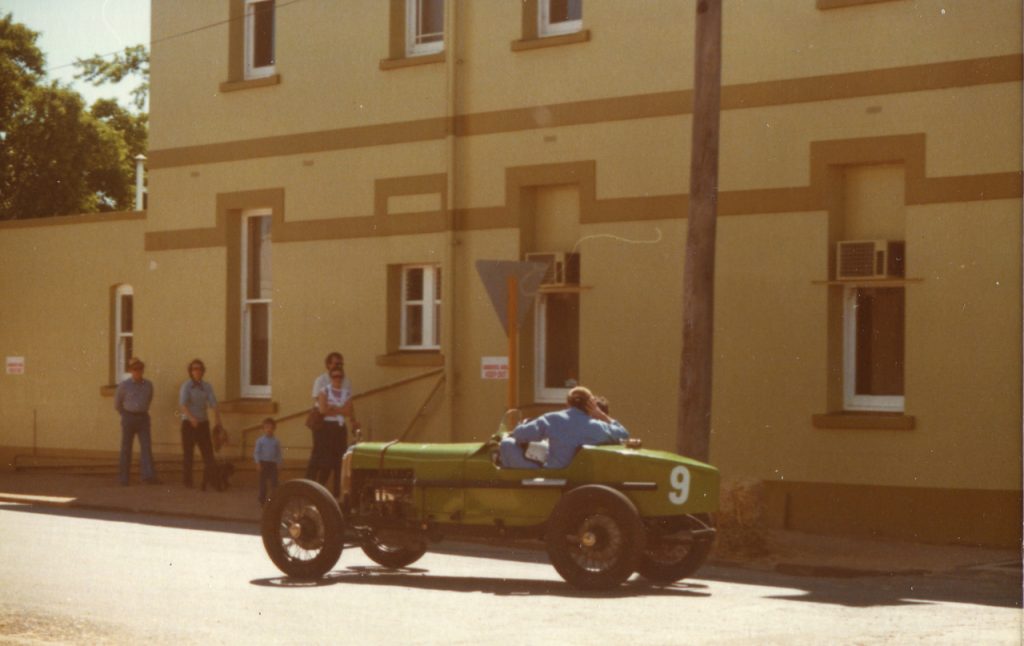 The Aston competes at the York Flying 50 C1982, prior to its aluminium upgrade. Note how high the body sits and the way the passenger is skewed to the right. Graeme has overcome both of these issues. 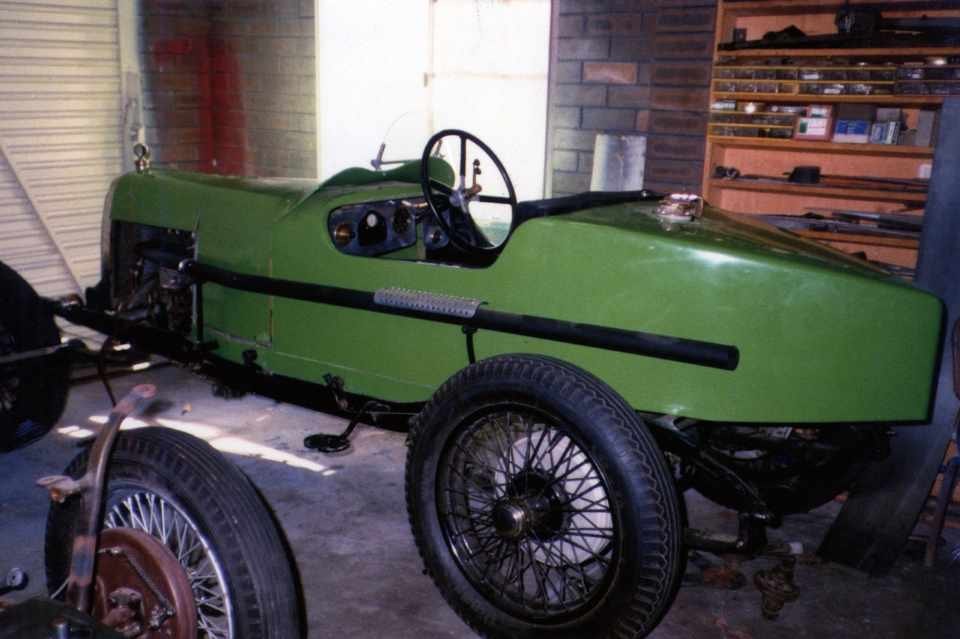 Again, the Aston still with the steel body fitted. 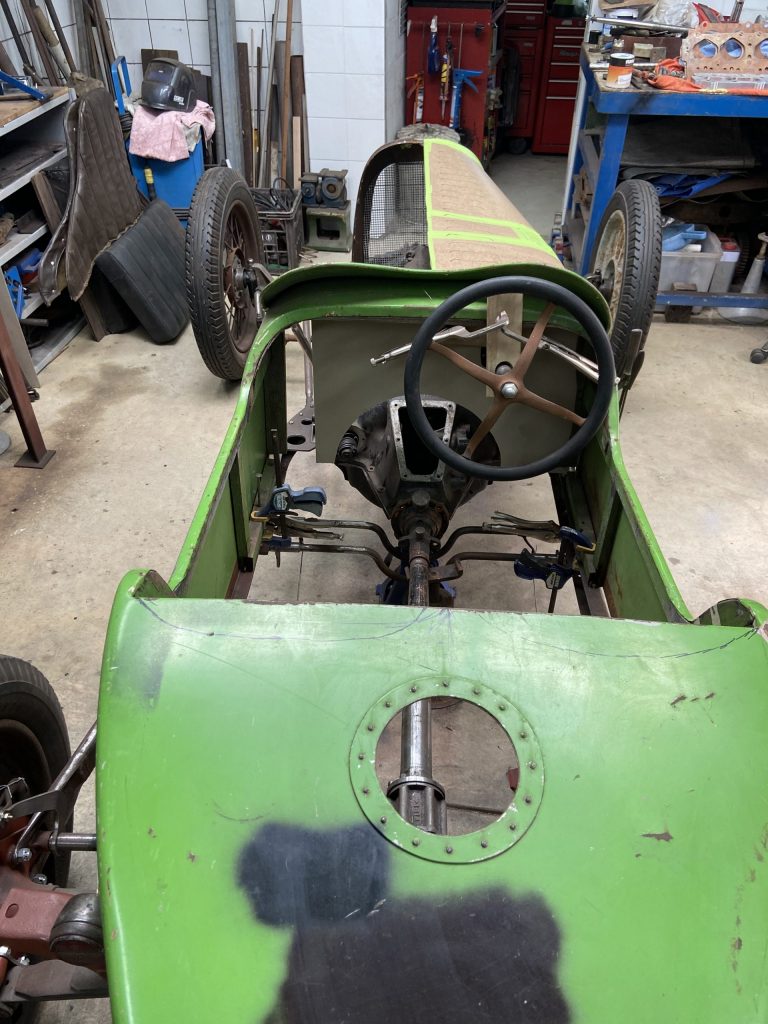 Early days of fitting the body to Green T. 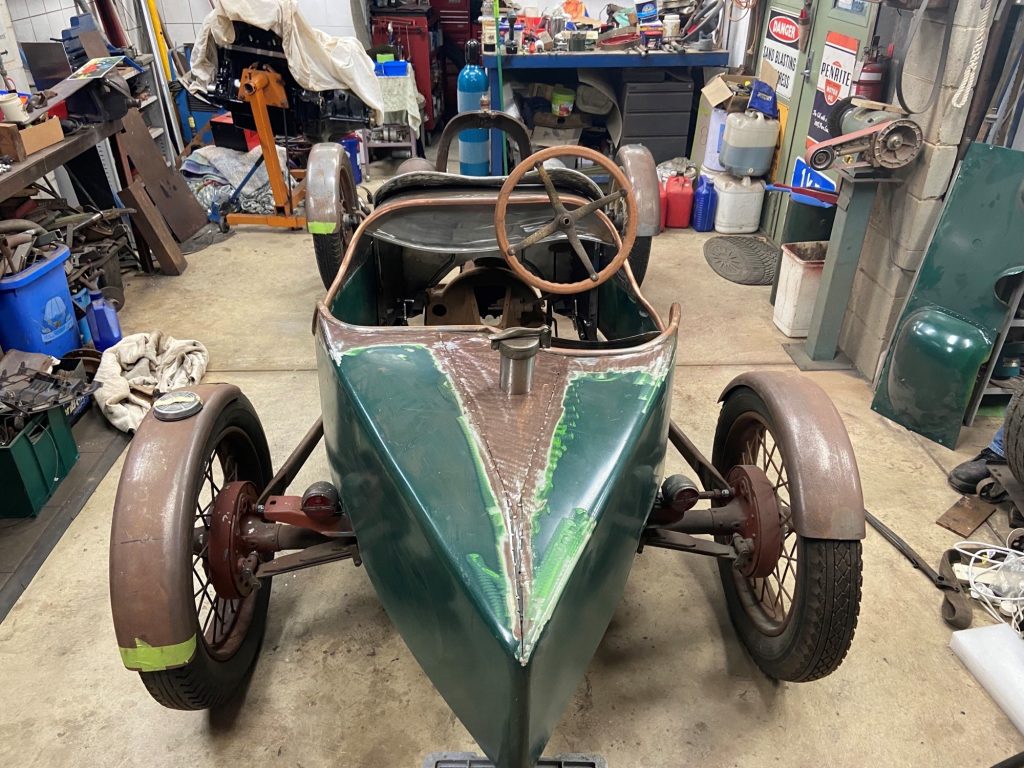 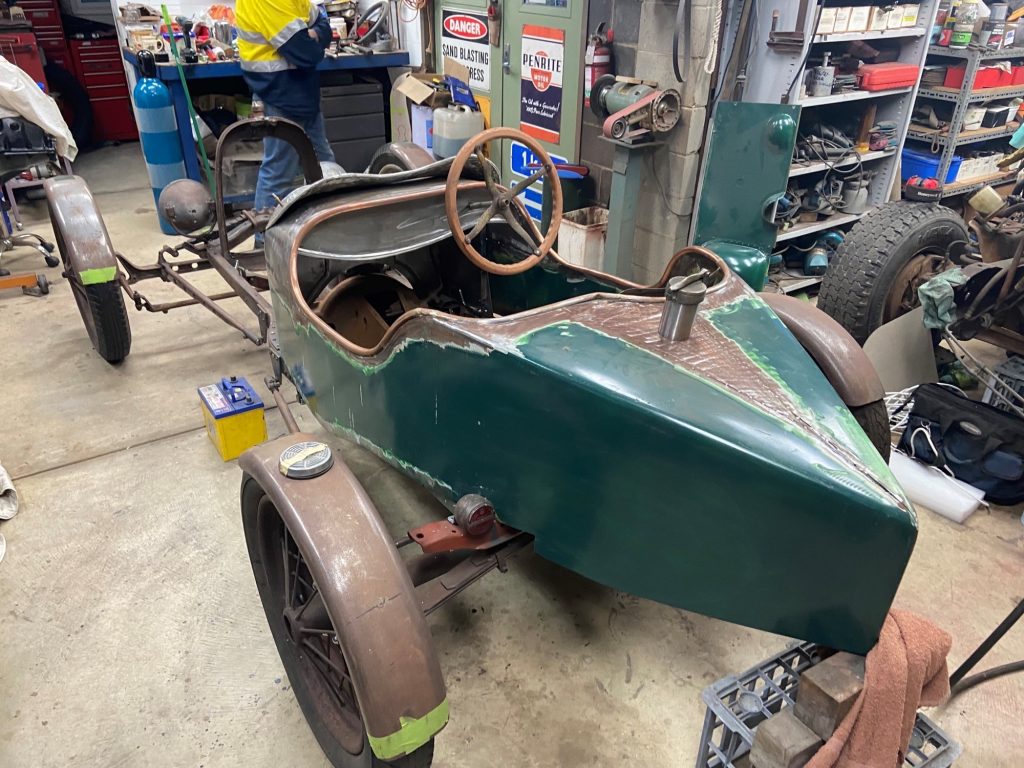