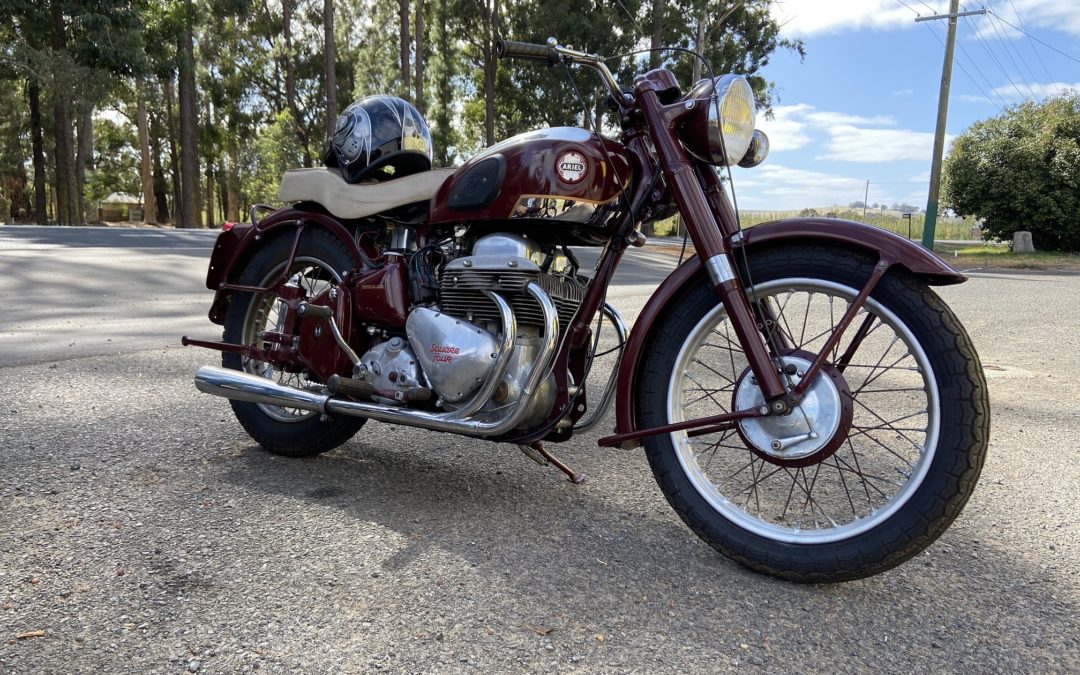 This week I was lucky enough to experience my first ride on an Ariel Square 4. These unique machines are quirky, relatively powerful and highly collectable. It was a joy to ride. The motorcycle that I rode was part of a deceased estate which consisted of some 12 operational motorcycles and tonnes of parts, certainly enough to build another 12 machines. As soon as I walked into the shed and saw the bikes and spares laid out, I said, “this must be Ernie Serles’ collection.” As I said those words, it stuck me, with this being a deceased estate, Ernie had passed away. Until that moment I was unaware of Ernie’s passing.

Ernie had been a great help to me when I first built my Ariel and sidecar, most notably when I had major gearbox failure. The following excerpt from Rebuilding the Ariel describes the ecstasy and agony of vintage motorcycle ownership. The excerpt takes up soon after my 1951 Ariel Red Hunter and Dusting sidecar hit the roads for the first time. 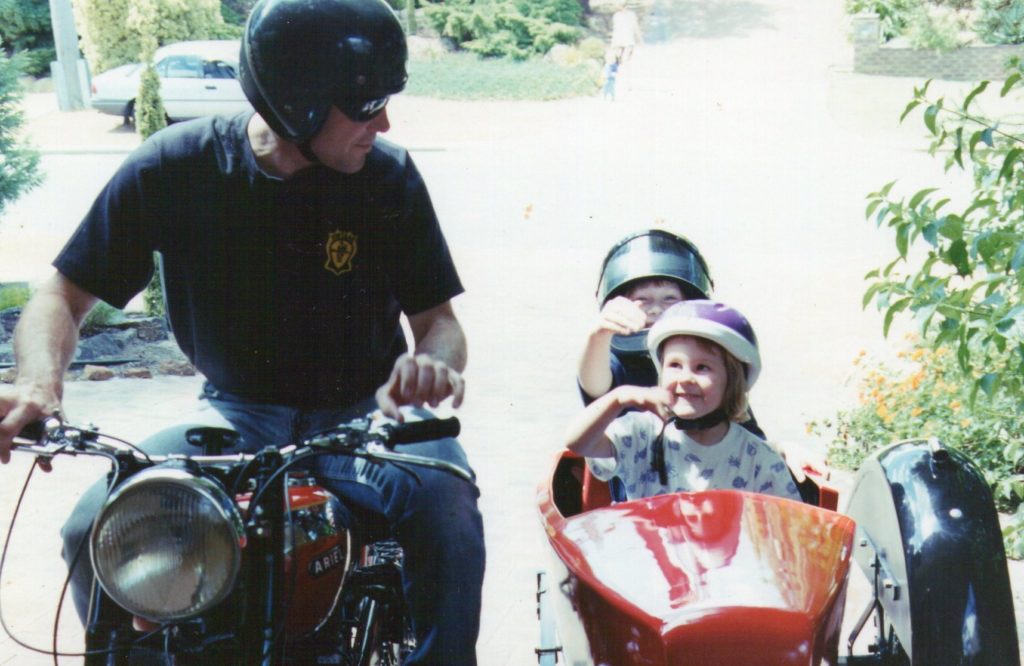 This is how we rolled in the mid to late nineties.  Evidently, by the time this picture was taken, Emily had graduated to a proper helmet, whereas Molly was still young enough to get away with her bicycle stack hat.

The outfit was finished off and licensed just in time for the annual Biker’s Limited, Perth Toy Run. This would be our maiden voyage. The toy run consisted of a ride of about 20 kilometres from the Southern Perth suburb of Applecross down the Kwinana Freeway into the city. Back then the toy run attracted upwards of 10,000 people.

I had often participated in the Toy Run on my road bikes, way back to the early days of the toy run, when I had my first Harley. On this day I put the kids in the sidecar and off we went. They looked so cute rocking around in the aptly named ‘boat.’ Emily and Molly were both under six years of age and therefore were excluded from wearing full crash helmets. They were allowed to get by with their lightweight bicycle stack hats.

As expected, thousands of bikes turned out for the Toy Run however, many more thousands of spectators lined the route to watch the procession. Sidecars were few, add the two kids in a vintage machine and all of a sudden the whole world seemed to be hooting, waving and hollering at my kids. The ride to the start of the Toy Run was mechanically uneventful, which was a relief as this predated mobile telephones and if, for some reason, the bike stopped, contingencies were few. 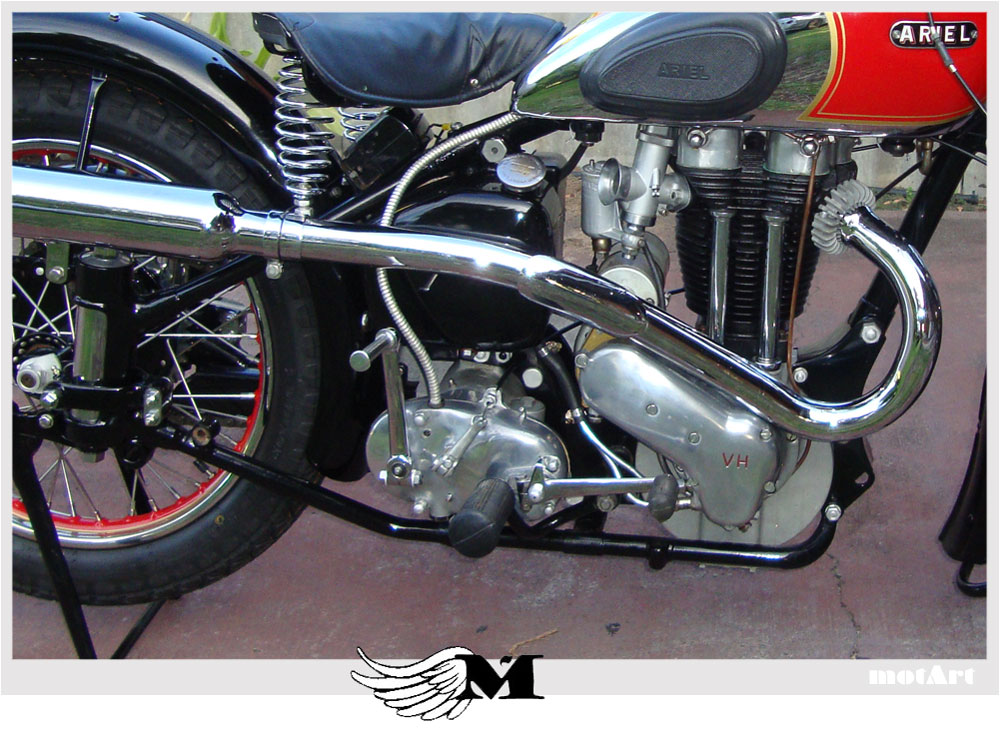 M is for Motart. Soon after my Ariel Red Hunter restoration was finished it was featured in the highly exclusive Motart Journal operated by Mr Frank Charriaut. https://themotart.blogspot.com/

Soon after the start of the ride, we had not travelled too far before a police car hailed us to a stop. I was both curious and apprehensive, what did these guys want? Even though I was a detective I still had a fair knowledge of the Road Traffic Code and I felt sure my kids did not need full crash helmets as the heavy appendage could do more harm than good on frail young necks? Aside from that slightly grey area, I didn’t believe I was transgressing any laws.

The Traffic Cop came running up to me clutching a piece of my bike, ‘she’s falling apart on you mate,’ he said as he handed back goodness knows what. I took the wayward piece of hardware with relief. I probably out-ranked the traffic cop but a brush with the law is still a brush with the law! That sounds a little odd but, back in those days, detectives and traffic cops had quite a begrudging respect for each other’s role. Anyway, the piece of motorcycle was dumped into the boat with the kids and we went on with the business of delivering toys to the needy.

We continued on into the city and slowed to the inevitable crawl for the last couple of kilometres. By now, the oil in my engine had thinned to the consistency of water and was seeping through every gasket in the engine. The hot oil running over the barrel gave the impression to anyone nearby that the bike was on fire as smoke rose all about me. Sure there were oil leaks but what couldn’t be fixed or plugged could be passed off as another British motorcycle idiosyncrasy. I wasn’t too concerned, or at least I attempted to portray a nonchalance that made it appear I wasn’t concerned. We rumbled into the city and my children deposited their toys for the kids who were too poor to be visited by Santa – a tough subject that one.

After the Toy Run I dropped the little ones at my mother’s house in nearby Victoria Park and continued on home with an empty chair. All in all, I felt pretty chuffed with myself. It had been a good run and the bike performed well but, most of all, my plan to share the joys of motorcycling with my children had come to fruition. The kids had a ball and I was pleased everything went so well. Now that my girls have grown up, it is times like these that one reflects upon as highlights along the road to raising children. Simple pleasures.

Well, maybe not so simple. It had taken lots of time and money, commodities that were both in short supply around the Talbot household back then, to get to this stage. Lots of trial and error, lots of skinned knuckles, lost temper and cursing as I bumbled my way through tasks hitherto unknown to me. But, in the end, I had turned out a quite remarkable piece of motoring history, I was very pleased with myself. Then, all of a sudden, the bike ground to a stop and the big cheesy grin fell from my face. I was only two kilometres from home, a situation for which I should have been extremely grateful because, as it turned out, I would be walking the rest of the way.

I couldn’t tell what was wrong with the bike but knew for sure it wasn’t good. I couldn’t move the gear lever and the only way I could get the bike to move was with the clutch drawn in. What followed was a two-kilometre push home. It was hard work and, as I was trying to avoid using the road, I stumbled forward keeping as far left as I could. This led to disaster number two.

About halfway home I banged the sidecar mudguard fair into a lamp-post, kinking the metalwork that had been lovingly hand-painted by me using lots of rubbing back and building up with several layers of spray-pack paint. It sounds odd, but with lots of work I actually turned the guard into a splendid addition to the outfit. Now it was scratched, bent and buckled and I was cranky. I was really starting to think ‘are vintage bikes really worth the trouble?’

Despite arriving home mid-afternoon, dehydrated, sunburnt and exhausted, I immediately set about removing the seized gearbox. As tired as I was, ripping the gearbox out sitting on the garage floor, from memory, went quite well. It was the first time I had done such a thing so I was kind of pleased to finally lift the gearbox out of the frame just as it was getting dark. What a day it had been. 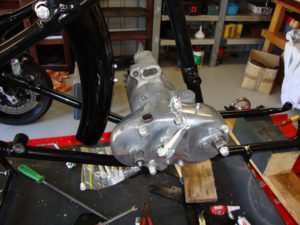 The Ariel gearbox is ordinarily a sturdy piece of equipment but I managed to seize it.

Following the seizure, with the gearbox out, I took it off to a fellow from the Vintage Motorcycle Club who lives and breathes Ariels. At that time, Earn had a large shed at the back of his Bentley house. It was chock full of Ariels and Ariel parts. Being December, it was also unbelievably hot inside Ernie’s shed. As soon as I handed the gearbox over he was off down to the workbench, whereupon he secured it in the vice and got to work. I stood silently alongside Ernie as he beavered away on my gearbox, for as long as I could bear the heat, then blurted out, ‘umm, Ern, I’m actually on my lunch break and really need to get back off to the office.’

Ernie waved me off without lifting his head, I made my way back outside and found it was almost a relief to be outside in the hot December sun. Ernie rang me a few hours later to advise he had located the problem. It was an offending brass bush that had a distinctive home-made quality about it (in fact, as it turned out, a lot of things on the Ariel had a shoddy, home-made quality). Evidently, the bush did not have sufficient journal for oil to flow and, with the added load of a sidecar, the bush got hot, expanded and locked the shaft. A $5.00 replacement was all that was needed.

When I went to pick the gearbox up, Ernie had left instruction with his wife that he wanted $5.00 for his work, and $5.00 for the bush. Naturally I left much more than that, amidst protestations that is was far too much. 25 years later and the gearbox still works as good as new. 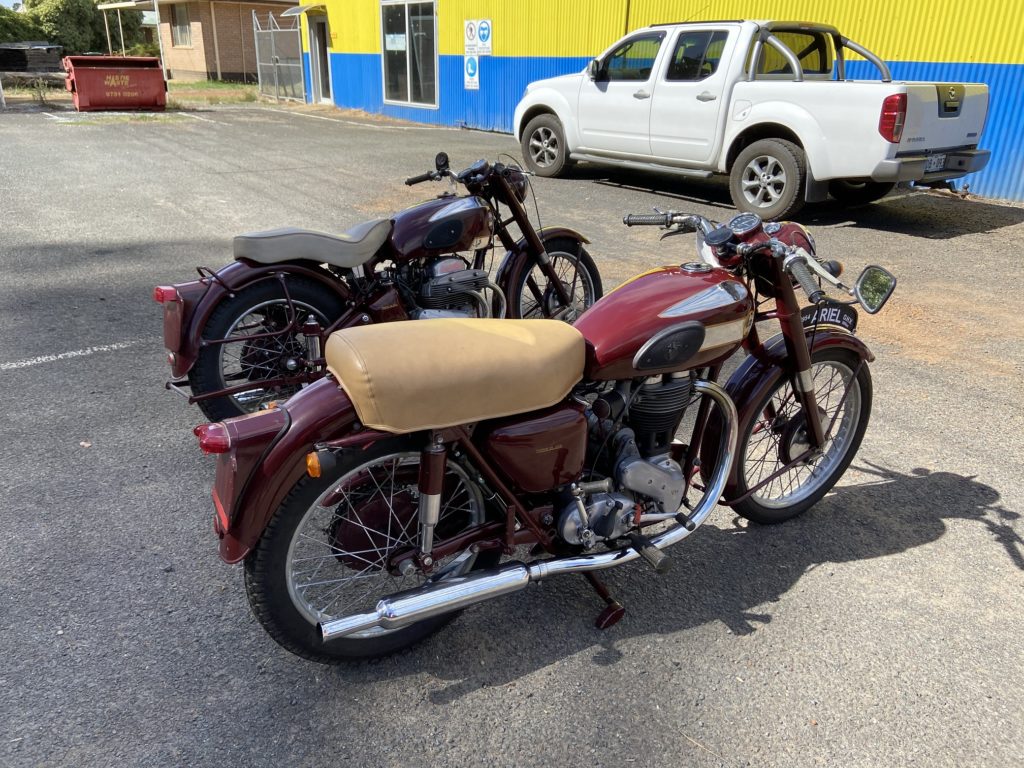 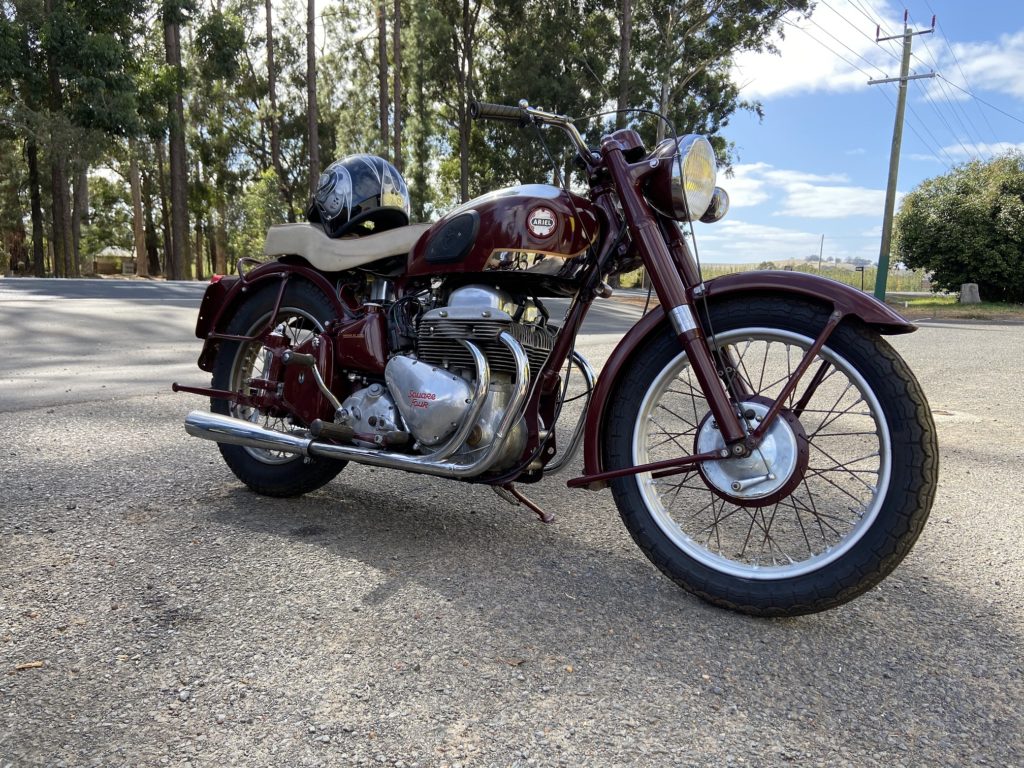 The late Ernie Serle’s 1956 Ariel Square 4. The old bike is in tip-top condition, starts first or second kick and runs like a swiss watch. A truly remarkable machine. 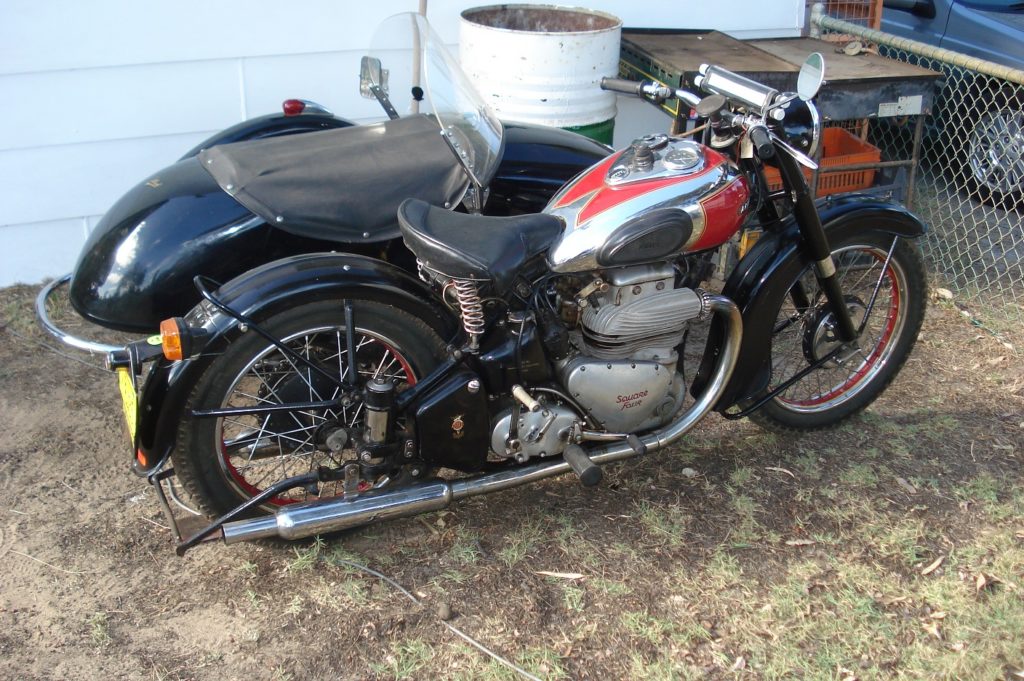 I took this photograph of a Square 4 outfit at the annual Indian Harley Club 2 Day Rally in 2018. Note this is the earlier, Mk 1, machine. The exhaust exits the front of the head, unlike the Mk 2 (above) which has four pipes (two each side) which was said to aid cooling.