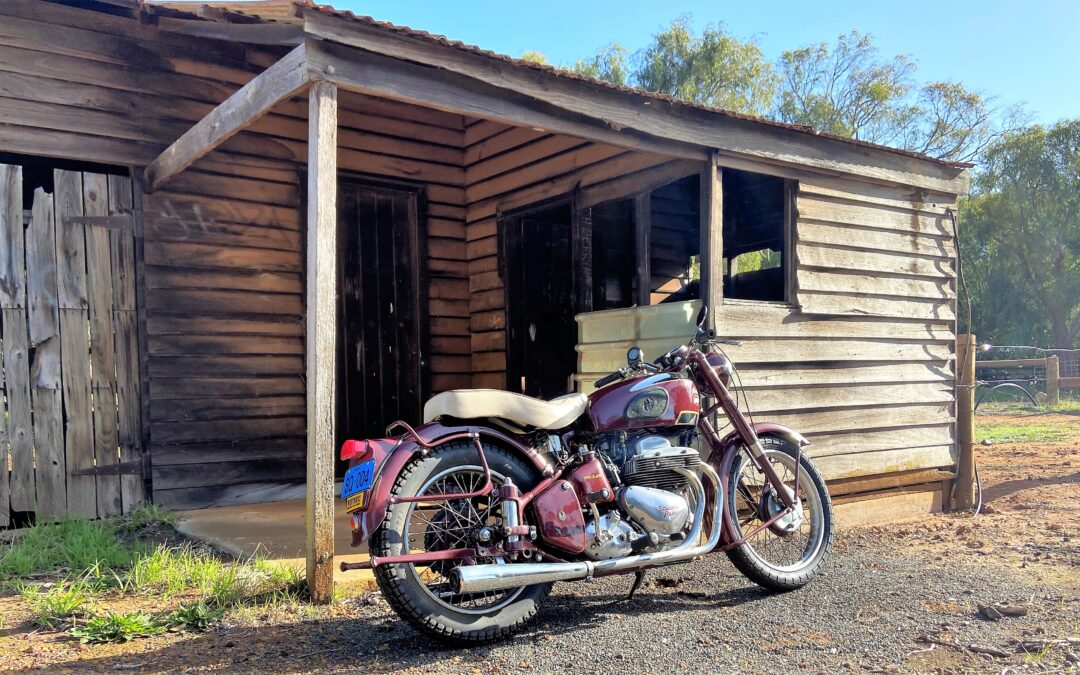 For most of my childhood and my teen years we had an old stockman living on our farm.  Bronc, as he was known, was the unofficial sentinel of the sheds and farm equipment, always there to spring me if I tried to sneak the agg-bike out for a bit of one-on-one motocross.  No sooner than I had the two stroke Suzuki 185 popping through its spark-arrested exhaust system and that feeling I’m being watched would creep over me.  There would be Bronc, hands behind his back, aged Fletcher Jones trousers, worn old boots – without a hint of socks – and a Woodbine hanging off his lower lip. Bronc lived alone with only his cats for company, dozens of cats, he never spent anything of the finer things in life so I assumed Wild Woodbines were a budget cigarette.  Everyone I knew smoked Benson & Hedges, Marlborough or Drum.  Bronc was the only one I ever knew who smoked Woodbines, thus they became the poor-man’s cigarette, the proclivity of a retired stockman.  That was until I learned they were the durry of choice favoured by Edward Turner.

Edward Turner was an engineer and influential designer who was at the dawn of the Golden Age of Motorcycling.  He designed single-cylinder engines for Ariel and Triumph before introducing his famous Speed Twin into the world back in 1937.  Along the way, Turner also had some other revolutionary designs including overhead camshaft engines that were driven by bevel gears (25 years before Ducati used the same idea).  Turner, who has been described as the “most powerful figure in the British motorcycle industry” (Old Bike Australia, 2020), also smoked Wild Woodbines.  We know this because the original plans of Turner’s famed Square Four engine were roughed out on the back of an unfolded Wild Woodbines packet.  Let that sink in for a moment.  One of the most extraordinary motorcycle engines of the twentieth century was scratched out by the designer on the back of a cigarette packet in a London tea-house.

As far as motorcycle engines go, a discussion over which was Turner’s finest piece could only really be settled in the carpark, and that comes from someone who owns both a Triumph parallel twin and a Square Four (recall the scene at the end of Fight Club where Edward Norton’s character is punching on with the imaginary Tyler Durden?).  They are two very distinct machines with a common ancestor.  Essentially, the Square Four is two parallel twin engines one behind the other, sharing a common crankcase.  The drive side of the crankshafts are connected by two massive gears, requiring the cranks to each run in opposite directions.  The result is an engine that is torquey, smooth beyond anything else available at the time and a little bit quirky.  Certainly, the Ariel would be no match for the Triumph on the race track but for someone who wants to enjoy the sheer pleasure of mid-twentieth century riding the Square Four is hard to beat. 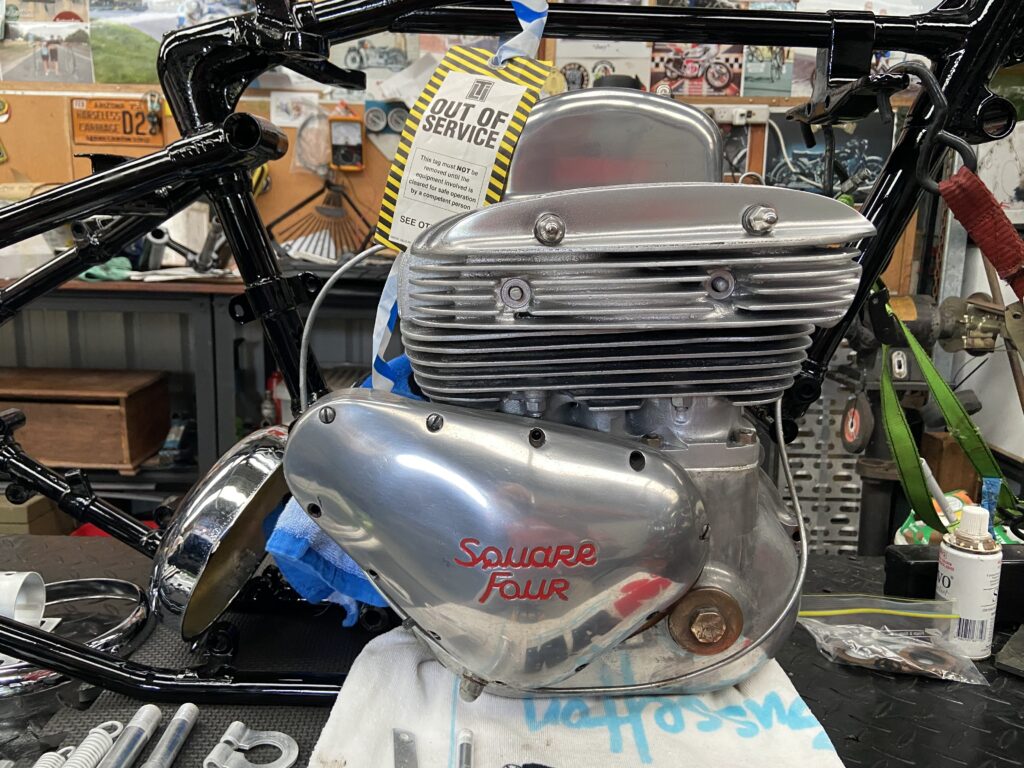 An extraordinary engine, put simply, one 500 cc engine behind the other. This would be the last incarnation of the Square Four engine.

Originally the Square Four was conceived as a 500cc engine, comprising two 250cc engines.  The Square Four quickly grew to 600cc ahead of its official 1932 release then a full litre in 1936.  It was the original 600cc design, with its chain-driven overhead cam, that gained the engine a reputation for overheating the rear cylinders – a reputation from which the Ariel would never recover.  Another thing that would damage the Square Four’s reputation was the fact they were chosen by police forces around the world, including Australia, as patrol bikes. Cops will flog any machine they are given to within an inch of its life (don’t ask me how I know this).  Handing any motorcycle to a police officer is akin to submitting it to a long-term endurance race.  If the motorcycle is still running six months later it can be considered a success, if not the cops will look elsewhere.  Harley tried this (and failed) in WA back in the nineties. WA traffic cops destroyed the Great American Freedom Machine in very short order, but I digress. 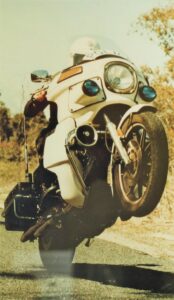 If a motorcycle survives police work, it’s okay. If it doesn’t, it never was. Harleys didn’t quite make the grade with WA Police (I can’t imagine why). 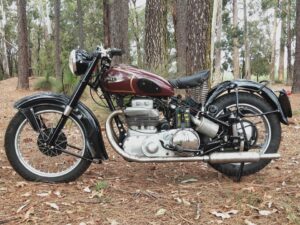 This 1949 ex Western Australia Police patrol bike was part of the collection. Note the after market air filter and beefed-up front mudguard designed to support a siren.

Two years ago, I happened upon two Ariel Square Fours, one was an ex-WA Police bike, a survivor.  The other was a ’54 civilian model, the last incarnation of the venerable Square Four.  Both machines were for sale and when a ride was proffered I took up the opportunity.

It never ceases to amaze me how easily the Square Four starts up (you can see how that test ride ended up).  Consider a box of four pistons, fed by a single SU carburetor and ignited by a car-style distributor – all from about 70 years ago.    The kick is slow and not exactly easy but at some stage of the second or third swing she will fire up with a unique hum and barely perceptible vibrations running through the machine.  The sound is exquisite, not unlike that of a vintage Ferrari or Maserati. 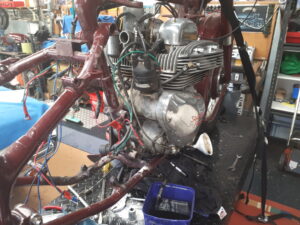 Pretty soon things got out of hand, the Square Four was losing bits and pieces at a rapid rate. Note the single SU carb and Austin A40 distributor.

The steering is surprisingly agile and I’ve yet to scrape anything but that’s only through self-preservation as I have too much invested in paint and chrome to risk sending this ancient machine down the road simply to test its limits.

When I took my newly-purchased machine in for examination, our Chief Machine Examiner, who knows me only too well, said he expected to see it looking like new in the very near future.  I indicated I would ride it around for a year or two before doing that however after an early 100km ride I was forced to reassess things.

Elsewhere in my shed I have a ’51 Ariel Red Hunter.  The 500cc machine has a plunger frame, similar to the Square Four, just a bit shorter.  The Red Hunter also has a sprung saddle, again similar to the early Square Fours.  For 1954 Ariel decided they would put a long banana seat, not unlike the one on my Malvern Star Dragster from 1970-something.  The banana seat was plonked on the frame, thus eliminating the second tier of suspension, the result being, a ride that was more uncomfortable than the earlier model machines.  The rivet-counters wouldn’t like it but, I resolved to revert back to a sprung saddle – and that’s how it started.  (To be continued). 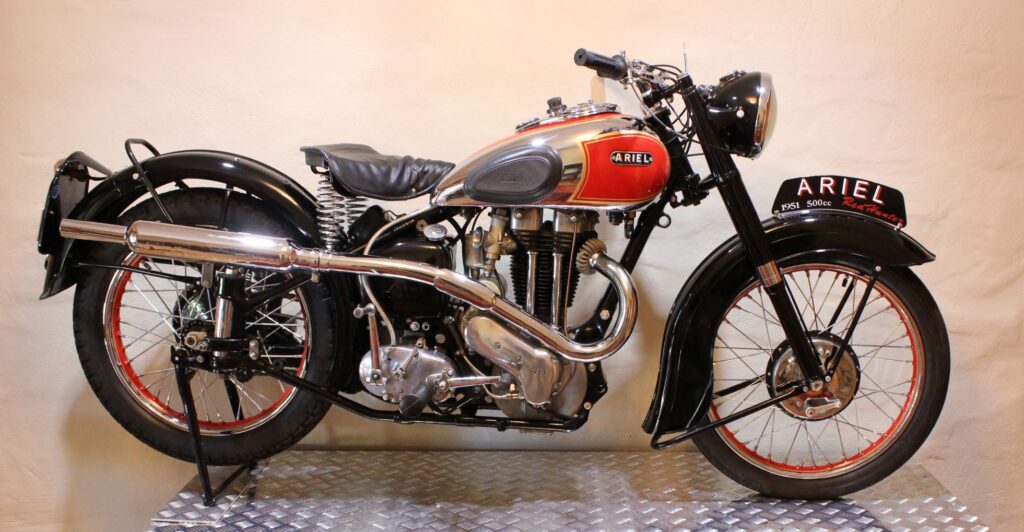 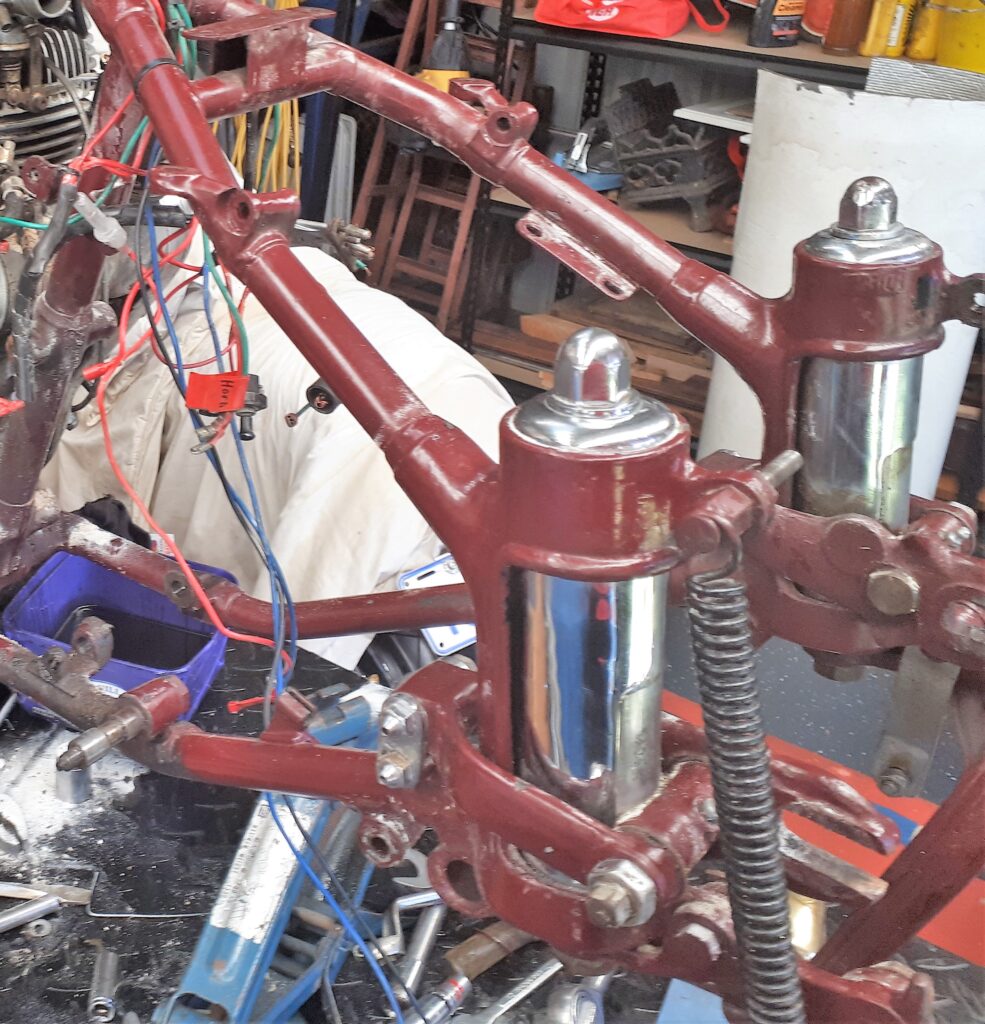 Close up of the plunger suspension. Both the smaller Red Hunter and it’s 1000 Square Four stable-mate shared this rear suspension. The only thing is, the Square Four lost its sprung saddle. 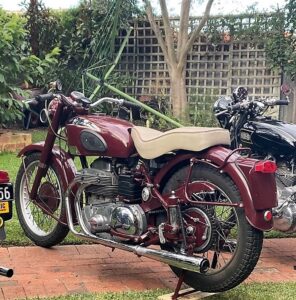 The Square Four soon after it arrived home. 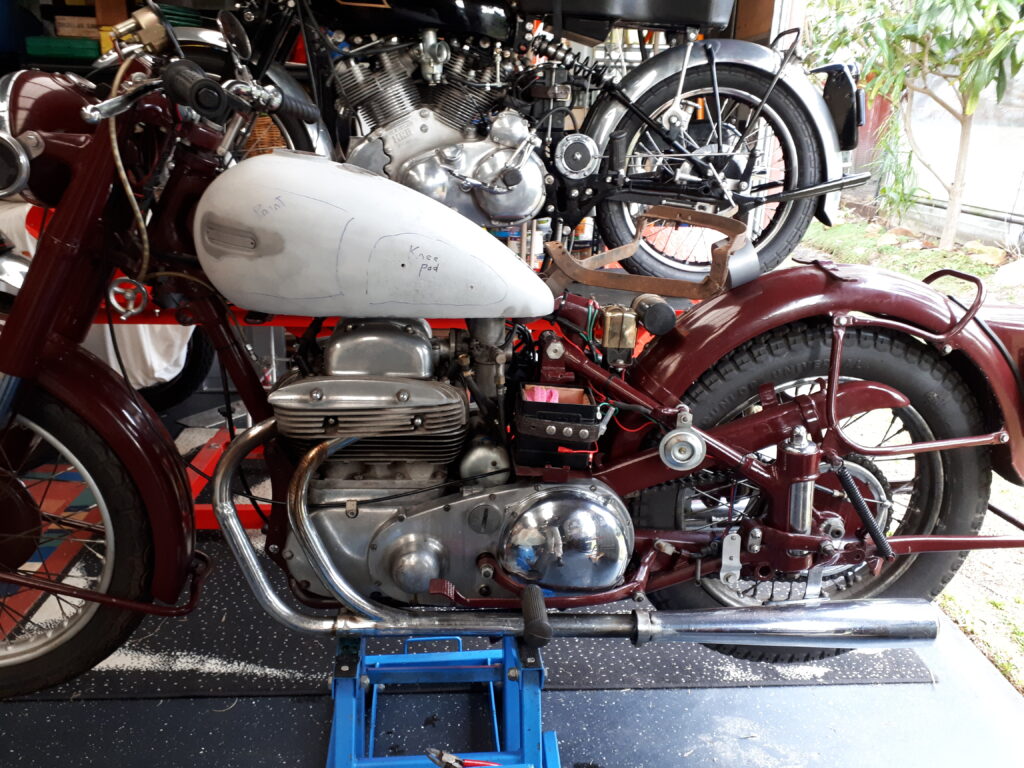 The idea was to fit a sprung saddle. Then I found a fuel tank … 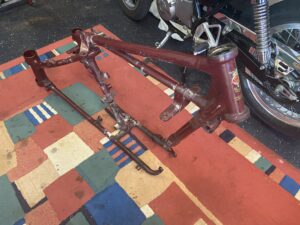