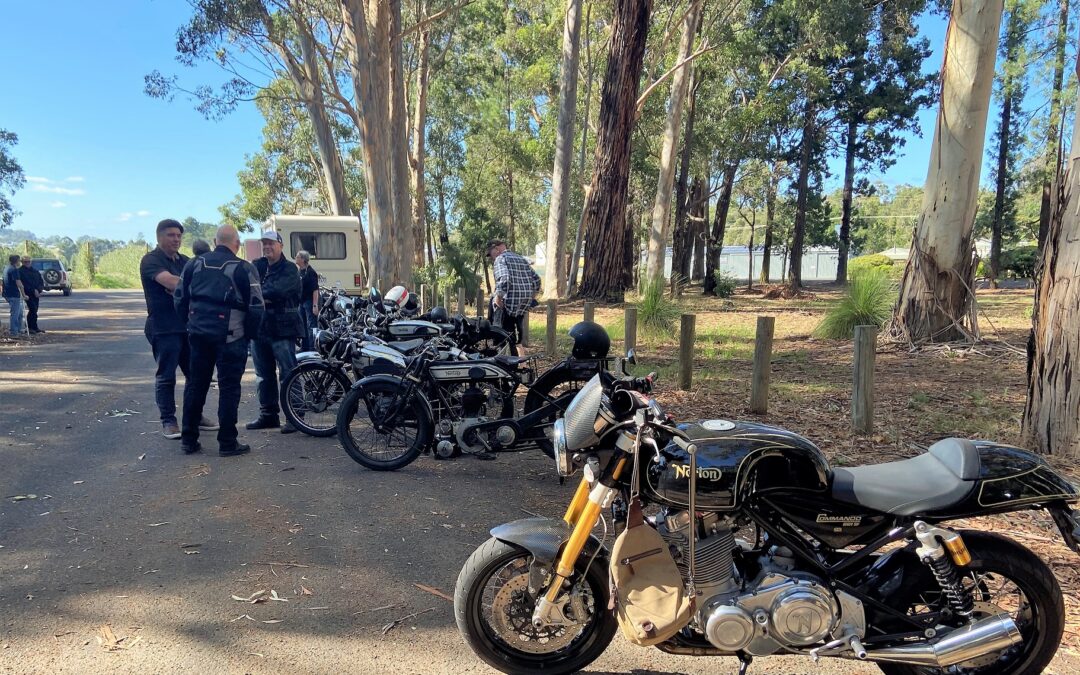 With the greatest respect to Donald, some Norton owners actually prefer to be riding their machines, such as those who gathered in Donnybrook, Western Australia over the 13th and 14th of March, 2021.  In excess of 40 Norton owners assembled for two days of riding, nattering about and admiring Norton motorcycles.  Not just any Nortons mind you, this was a gathering of Norton motorcycles with only one cylinder.  These folk think nothing better than riding their motorcycles on a Sunday afternoon however, given the last Norton single was manufactured in 1964, there’s plenty of afternoons spent pulling engines apart.

Donald Heather’s utterances were nothing more than motherhood statements designed to appease investors who, in 1960, were growing nervous with the lack of future direction the exhibited by the company.  Rumours of unreliable and fallible machines were quelled by Heather as he fought to hang onto his lucrative position.  The remedy proved to be a series of twin cylinder machines and, presumedly, the appointment of a more passionate and dedicated executive who would remain faithful to Norton’s heritage.  However, by then, it was too little, too late.  Norton twins were a fine machine but the company only managed to hang by its bootstraps.  Gone was the racing heritage and successes that defined Norton’s early years. 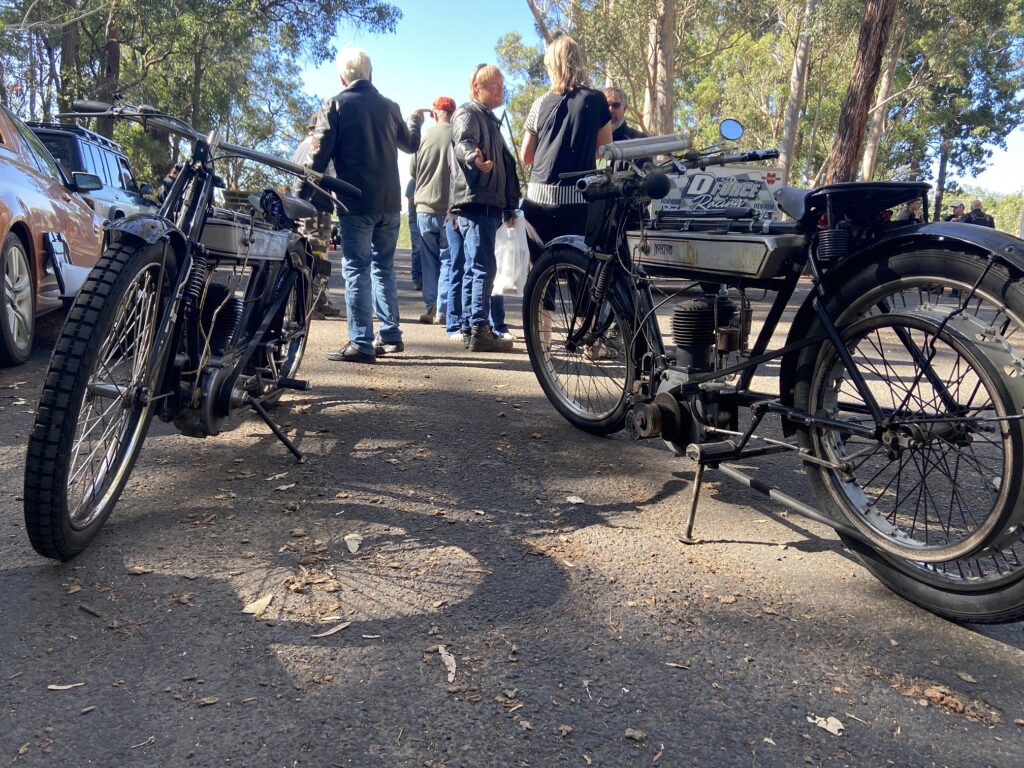 1910 was Norton’s second year with his own engine. Only seven of these machines are known to exist in the world, here are two of the seven at the same event in Donnybrook, Western Australia.

Norton Motorcycles was established in 1898 by James Lansdowne Norton.  Norton was a gifted engineer but a poor businessman and the company fell into receivership early in its life.  This would signal the future for a manufacturer who was more concerned with performance and reliability than returning dividends for shareholders.  Competing with the liquidity of Norton Motorcycles, was James Norton’s health.  He fell ill as a young man and was left with a malady of premature aging, earning the young engineer the nick-name “Pa.”

Pa Norton was only 55 years of age when he passed away and sadly did not live long enough to witness the legacy of his creation – namely the most successful single cylinder motorcycle of all time.  I can hear Ducati riders spitting their Chianti back into glasses everywhere.  Whether, or not, Norton is the greatest motorcycle of all time is an argument best left for campfires, dining room tables and Christmas day punch-ups with the brother-in-law.  What can’t be disputed is single cylinder Nortons are achingly beautiful motorcycles with performance to match.  It’s no accident Norton dominated racing across the UK and Europe for the first half of the twentieth century.  Ten Senior TT wins between 1920 and 1939 and 78 out of 92 Grand Prix races are impressive statistics in anyone’s language (including Italian).

In 1924 Pa Norton, suffering advanced cancer, was wheeled up to the main straight of the Isle of Man TT circuit to witness his motorcycles take out two TT trophies that year.  Pa received the great chequered flag of life on 21 April 1925 and has been venerated ever since.  By many people, including me. My trials and tribulations are well documented on this site and elsewhere, but, still I remain a faithful follower of the brand. 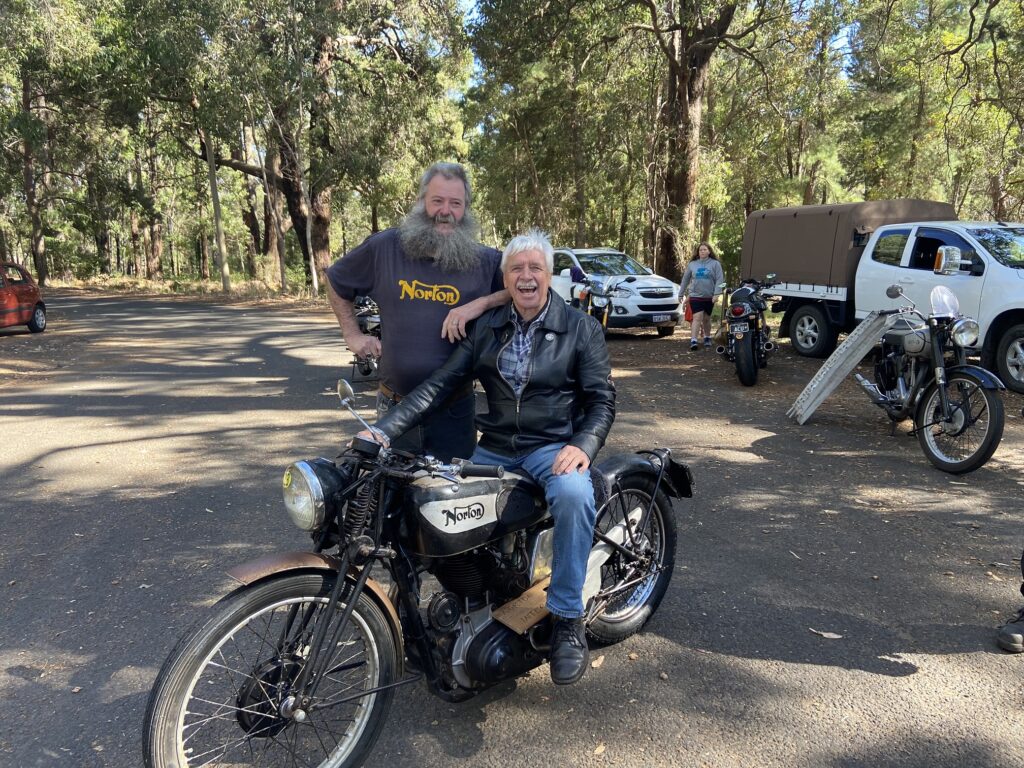 Muz and Rocket, two Norton enthusiasts the author is honoured to call friends.

This brings us neatly to the inaugural Norton Singles Run, hosted by the Indian Harley Club of Bunbury, Western Australia.  The run, hatched by Norton enthusiasts Murray, Peter and Kelvin, was scheduled to take place in February was postponed when WA went into a Covid-enforced lock-down, throwing plans into disarray.  Had it not been for the Covid factor one would expect many more motorcycles, however, by any measure, the inaugural event was a huge success.  The line-up of machines on display was breathtaking.  ‘Line-up’ is probably the wrong word, getting this mod to form anything resembling an orderly assembly simply for a photograph was not on the agenda.  These blokes wanted to ride Nortons, talk Nortons and look at Nortons.  Consider, there are seven 1910 Norton motorcycles know to currently exist in world.  Two of them were present at the Norton Singles Run.  1910 was Pa’s second year of production with his own engines.  Up until this time he had been using proprietary units from Swiz and French manufacturers.  It was a Peugeot V-twin engine that powered Norton to victory in the first ever Isle of Man TT races in 1907.  That was the last time Pa Norton would dabble in twins, as far as he was concerned future victories lie in the simplicity of singles.  The rest is, as they say, history. 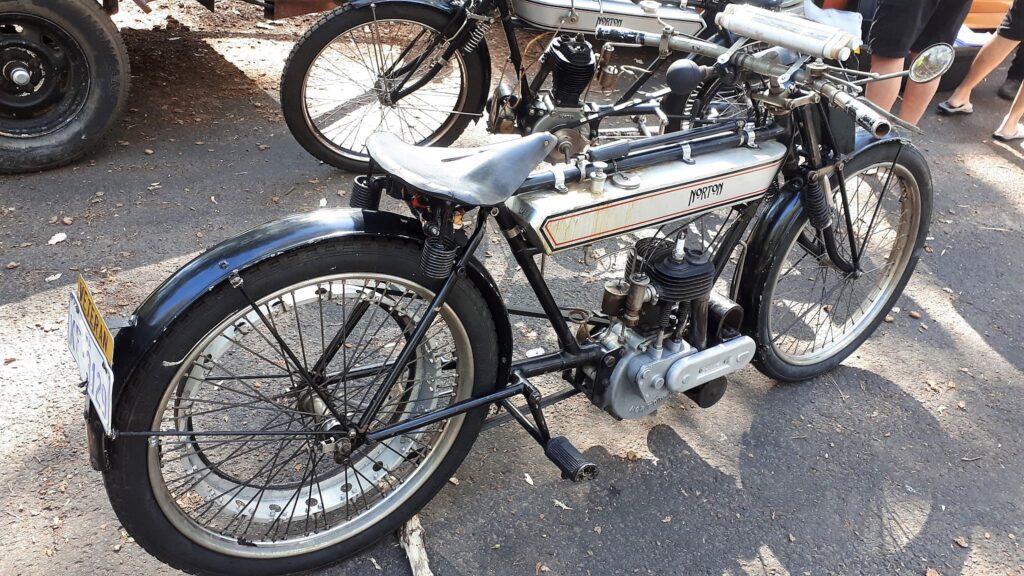 Another profile of the pair of 1910 Nortons. This one by Alan Wells. 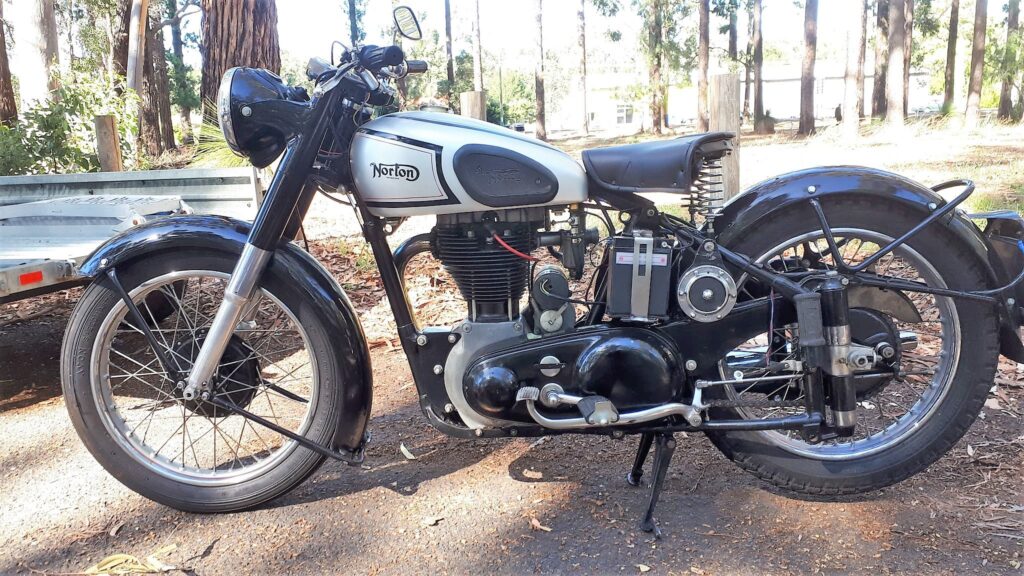 One of the lovely ES2 Nortons that were in attendance at the inaugural Norton Singles Run in Donnybrook, Western Australia. Photograph by Alan Wells. 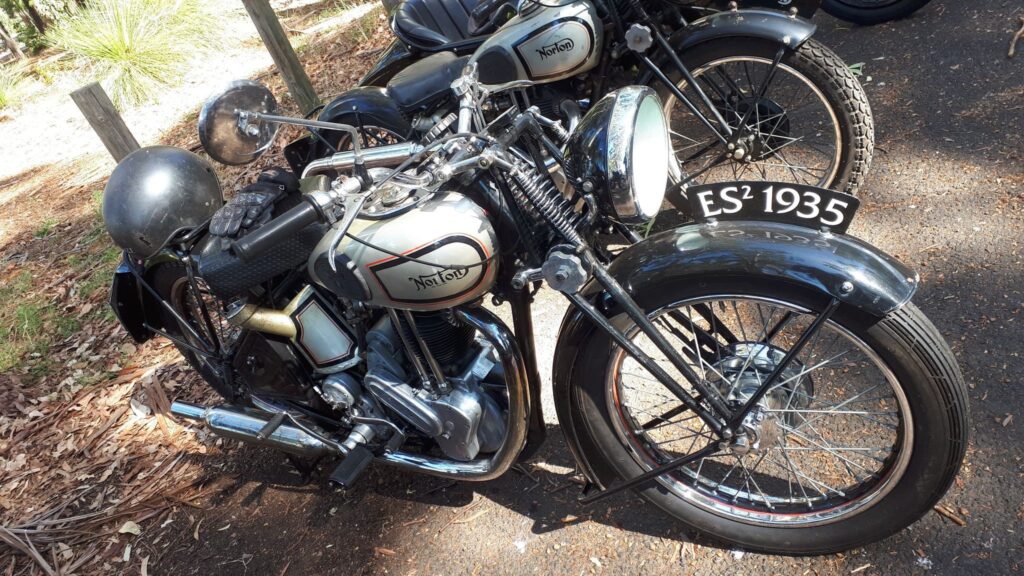 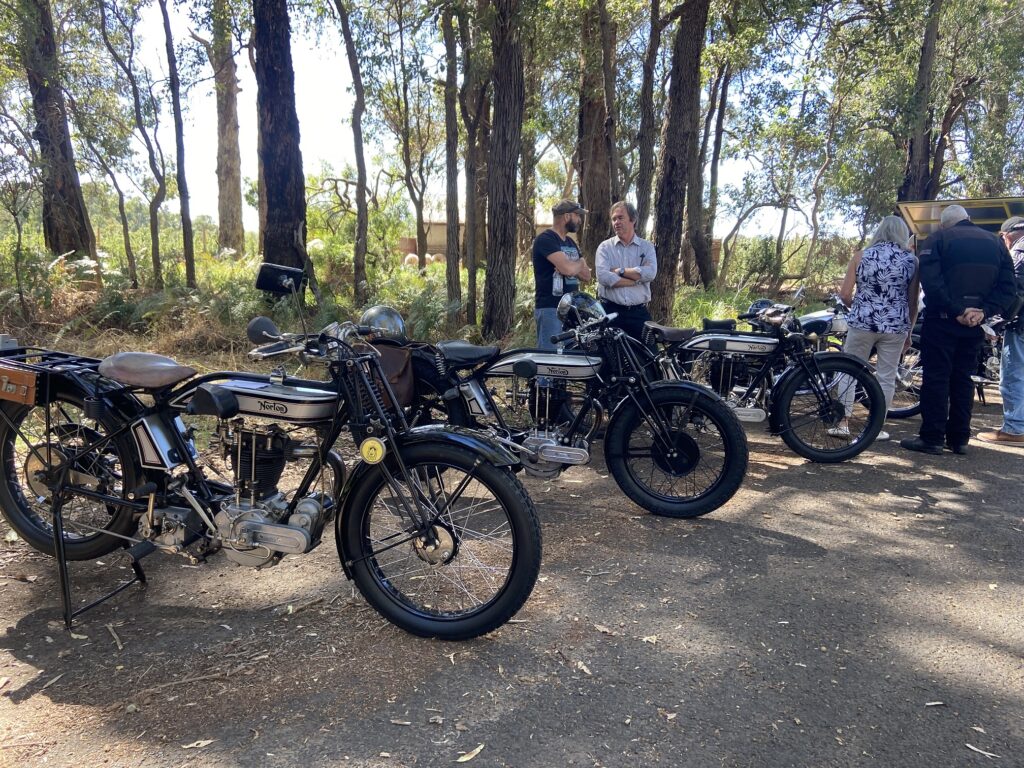 A line up of achingly beautiful Norton motorcycles. These ones are from 1924 to 1926. 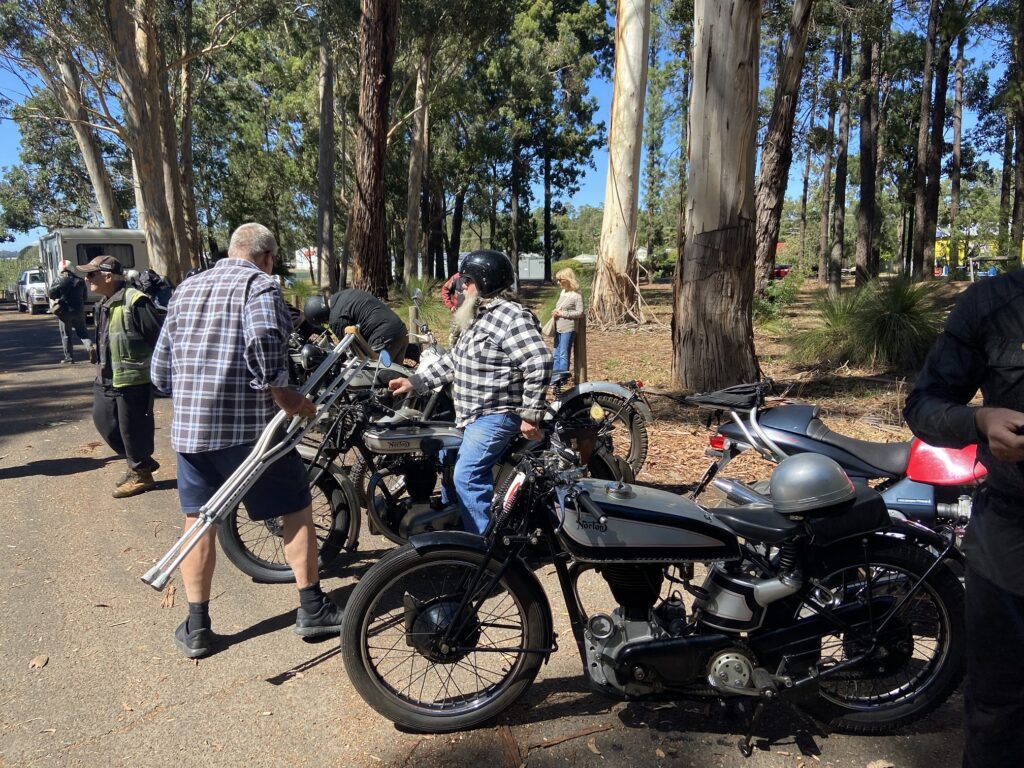 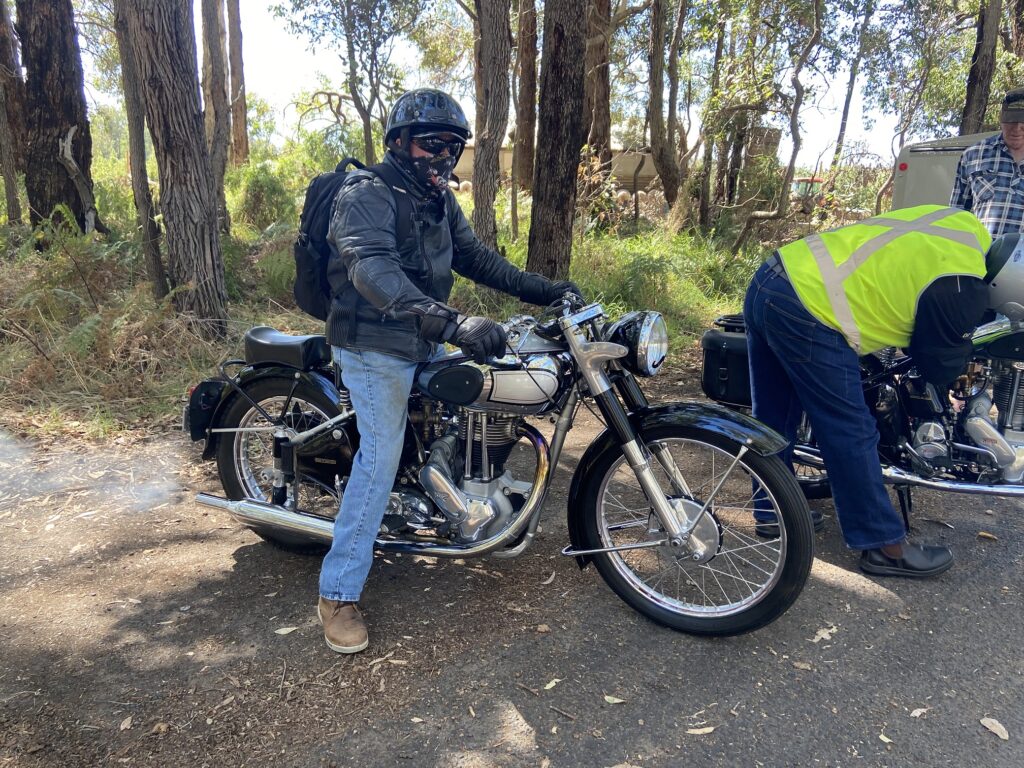 Greg on his stunning ES2. 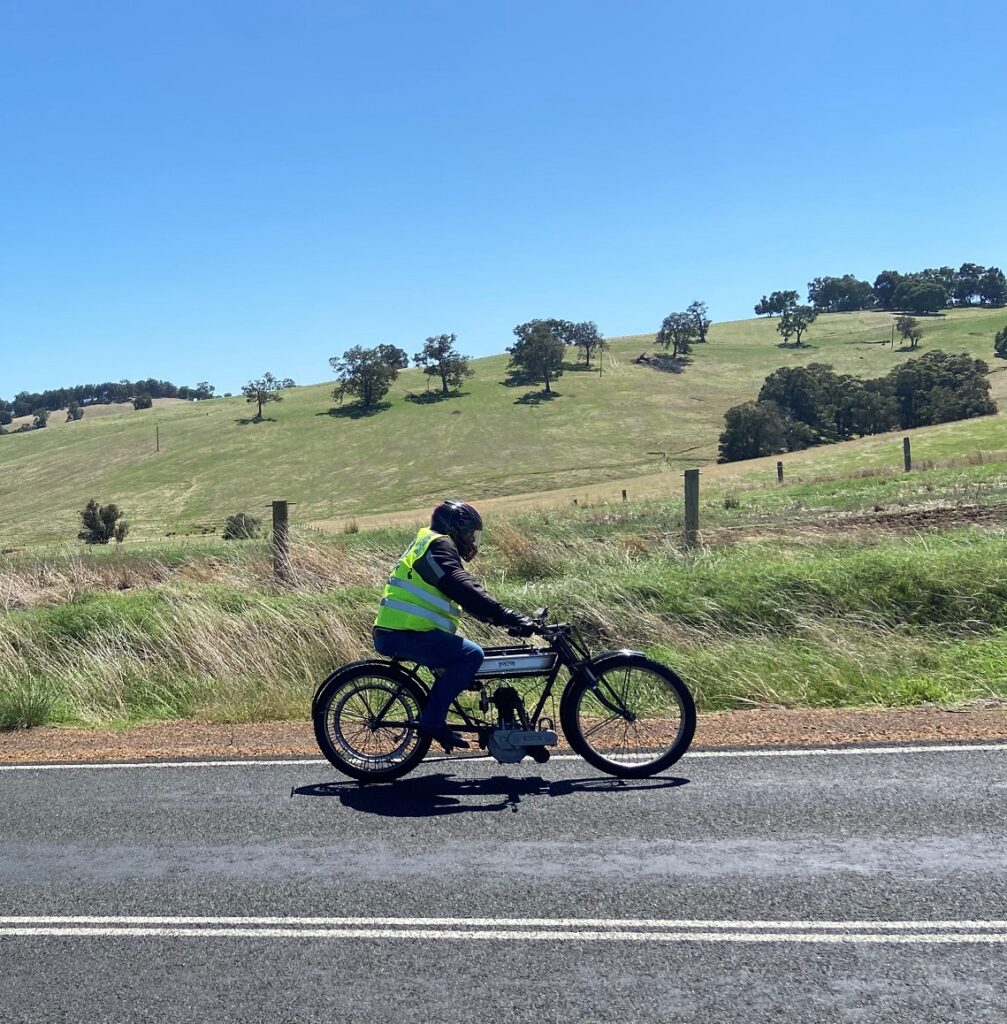 The 500cc 1910 Norton was getting along at a fair clip. Here she has just climbed a hill that would have a modern motorcycle looking for a lower gear – which is not an option for Andrew, he only has one. 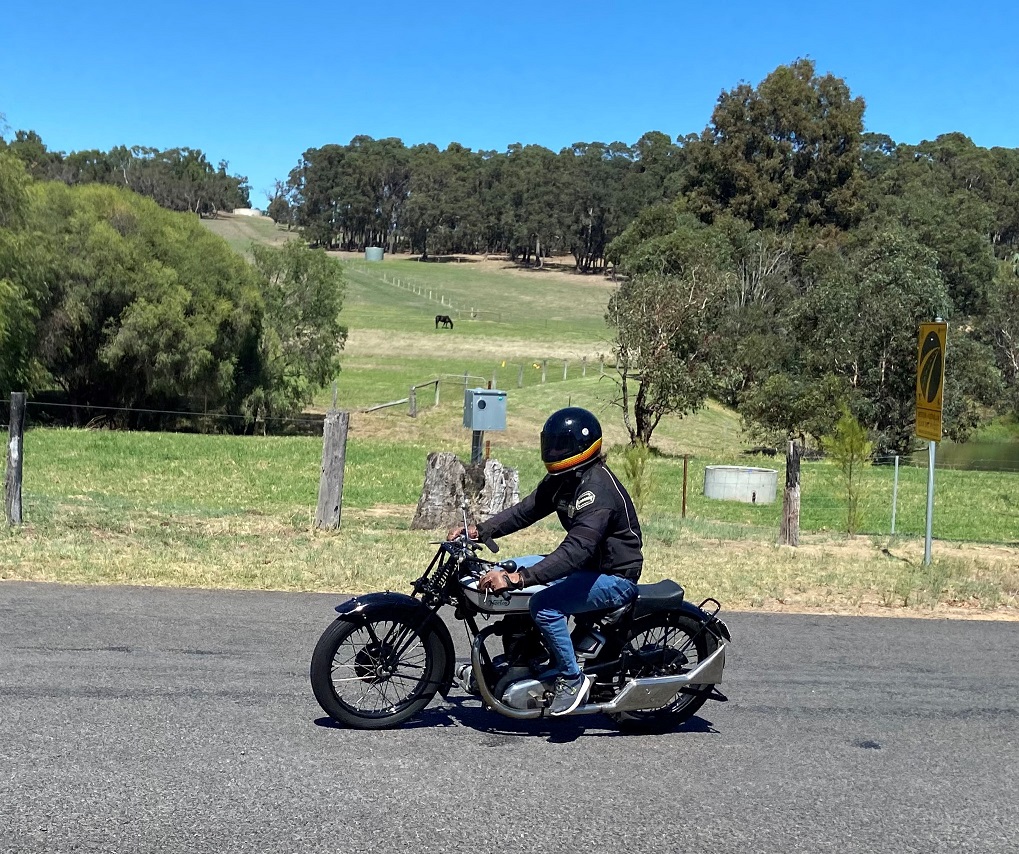 The South West of Western Australia provided the ideal location to get about on vintage and veteran Norton motorcycles. 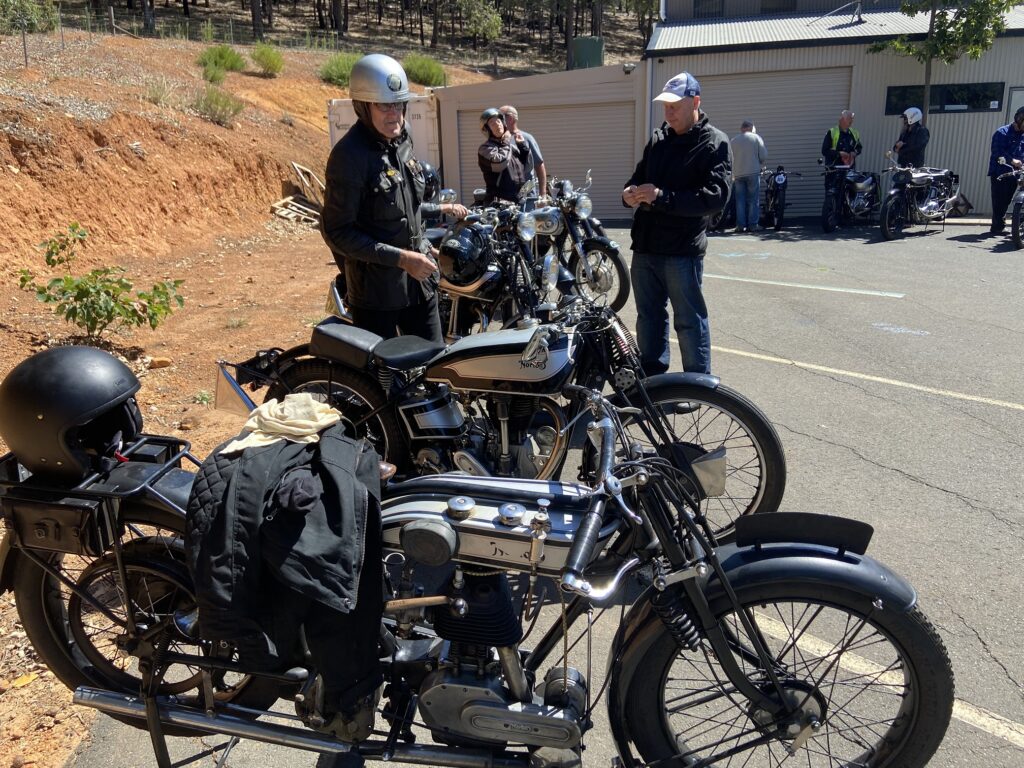 Manx silver, as far as the eye can see. 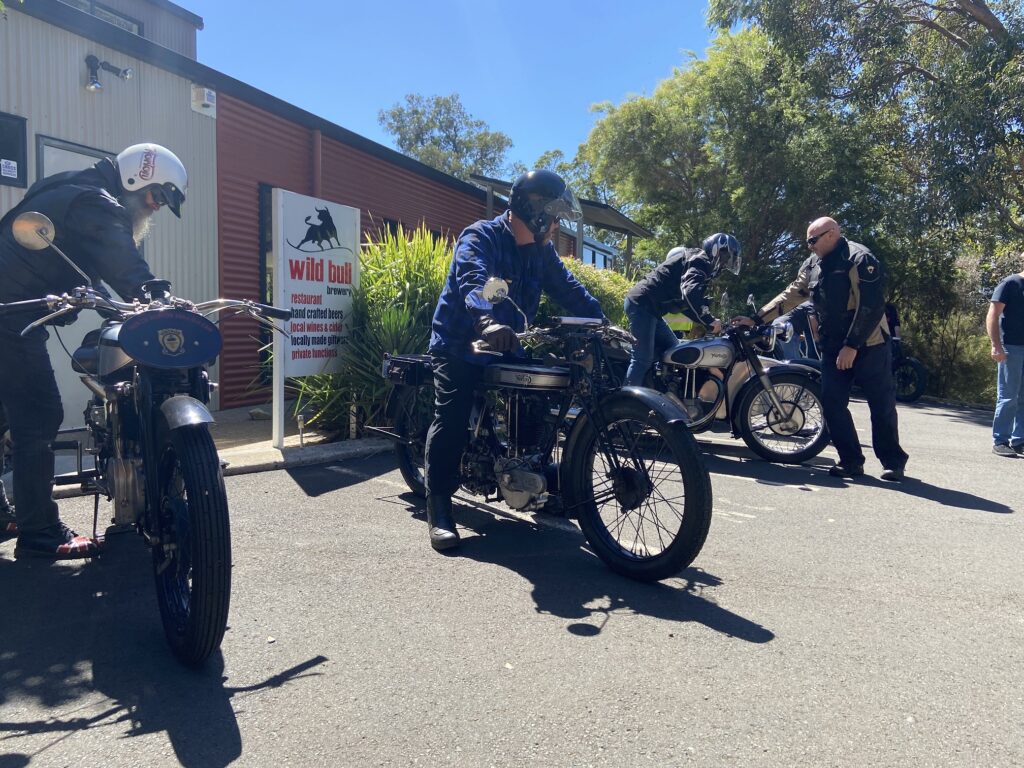 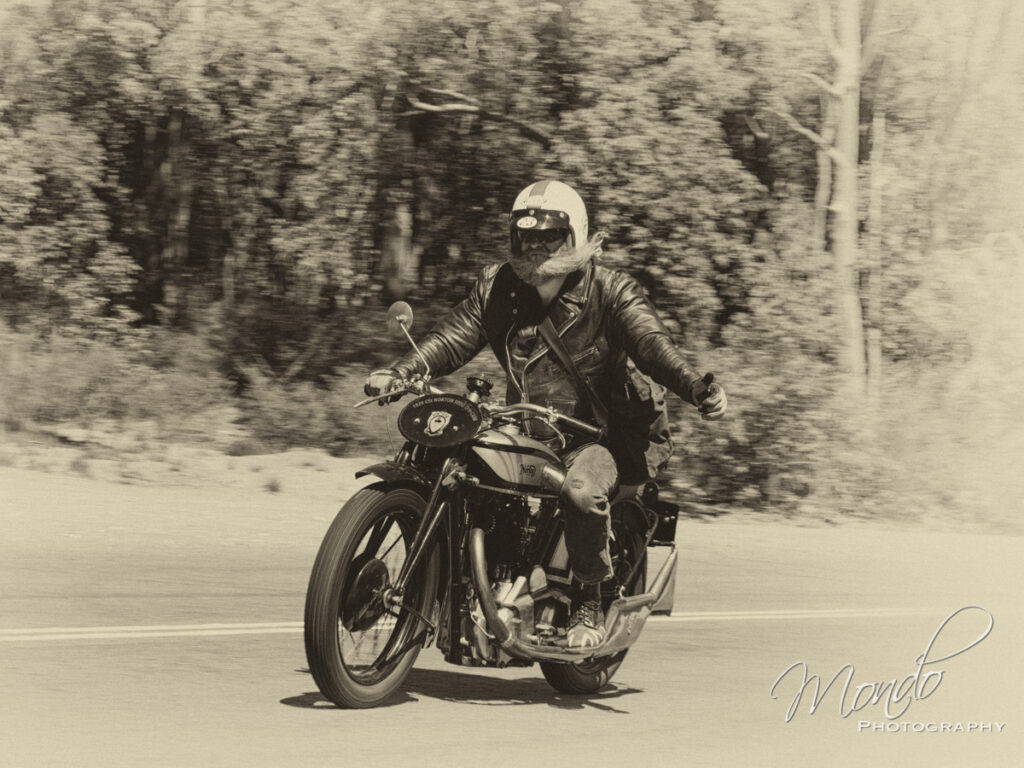 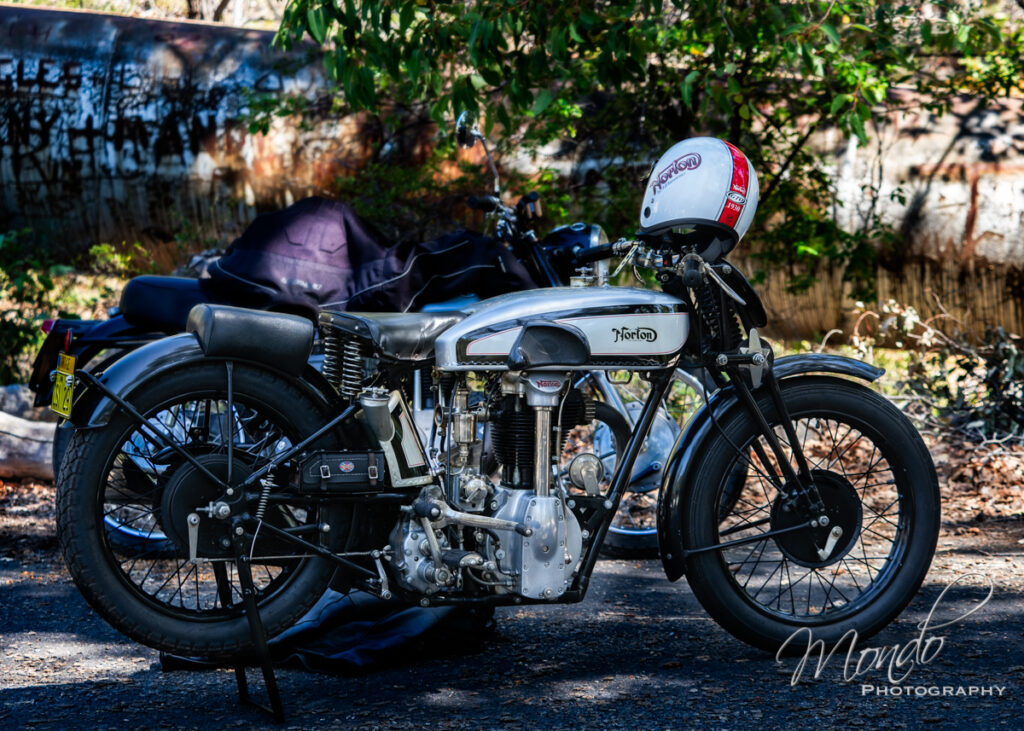 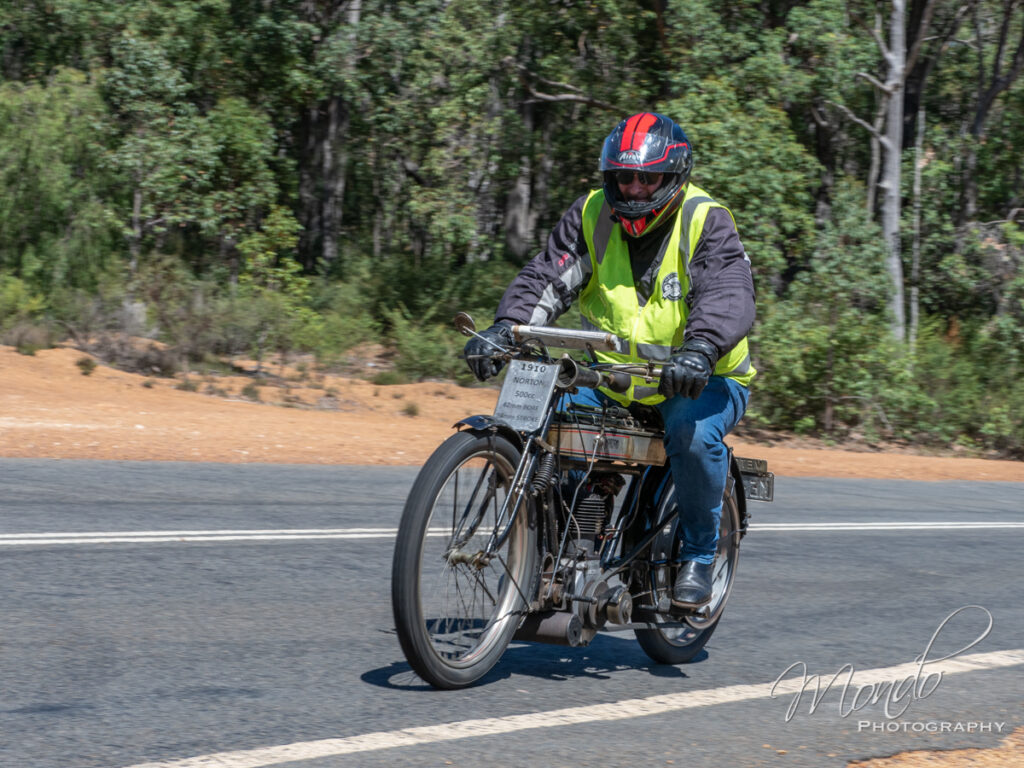 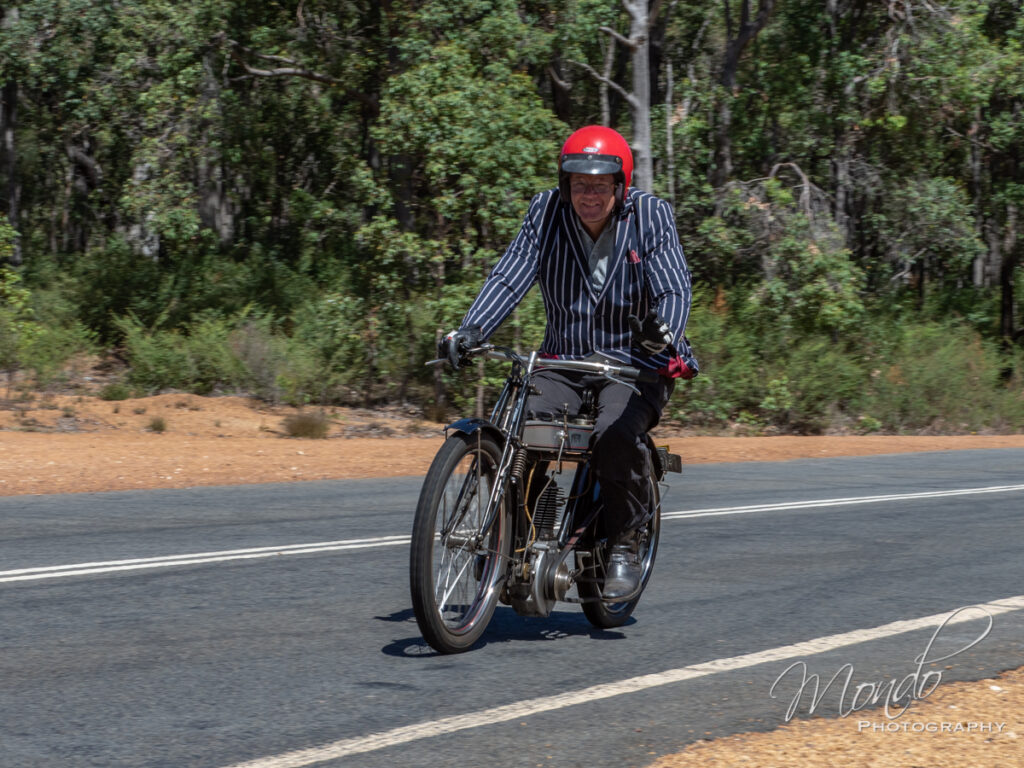