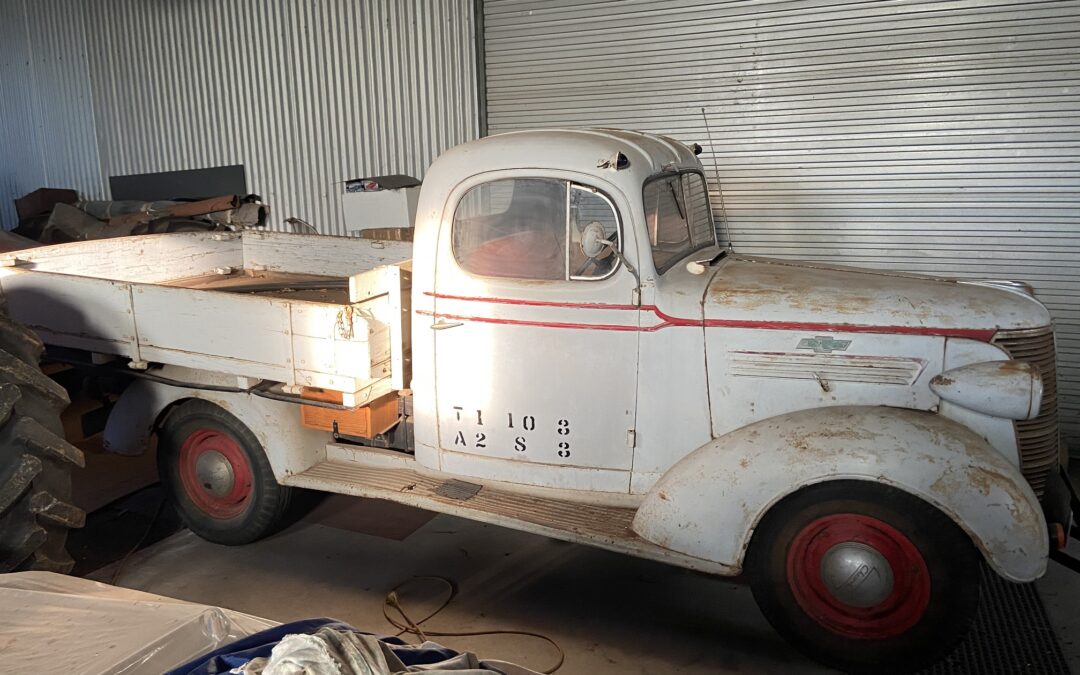 Forgive me readers of the ‘Shed for I have been a bit slack of late.  It has been some months since I last put my pen to paper, so to speak.  In my defence, I have been a wee bit busy writing a 100,000-word thesis which is now with examiners in the UK.  So obscure was my topic, we couldn’t find people qualified enough in Australia to pass judgement on my doctoral scratchings.  Anyway, back to the shed.

There has been a bit on, the most significant being we have a new inclusion to the ‘Shed.  On Christmas Eve, we picked up a 1938 Chevrolet half-ton truck.  In trucks terms, it’s very small, more like a flat-bed ute.  It is licensed and running, but needs some serious work.  The little truck was built in Australia from an engine/chassis imported from Chevrolet USA and built up according to Australian demands, which, at the time were many.  Clearly, however, power wasn’t one of them.  Driving the little truck 60 kilometres to home was laborious.  She was flat out doing 40 miles per hour and for a time, I became more of a nuisance than the mortal enemy of motoring enthusiasts everywhere – the caravan.

The Chevy has been purchased by Catherine for her honey business and will become both a practical and promotional vehicle for Wedderburn Honey.  Affectionately known as “Honeycomb,” the first order of business is restoring the bodywork, followed by giving her longer legs (the truck, not my wife).   Both of these undertakings are easier said than done.

In terms of the first undertaking, as I write, all the tin-wear is off the chassis and is with the painter.  The guards have been finished and the running boards are almost done.  The cab is a bit trickier but for a truck of some 82 years of age, it’s in remarkably good condition.  I trust the photographs accompanying this story will add credence to my assertion.  Some folk will look at the photos and quickly start bleating about patina and leaving it as it is, and so on.  Let me stop you right there.  My wife and I are of the opinion ‘patina’ is a euphemism for being too lazy to go to the trouble of panel and painting.  Aside from this, the so-called patina in the photographs is not original.  Unearthing body panels revealed the original colour, an olive gold, and it is to this we hail.  Giving the car some beans is equally fraught with complexity.

At a time where every man and his hound are putting V-eights into classic Chevs, we are breaking with tradition and sticking with the straight six, or “Stovebolt” as they are affectionately known. The original, 1929 Chevy sixes were held together with bolts that apparently looked like they had been lifted from wood-burning stoves, hence the name.  Stove bolts have long since been dispensed with, but the name has stuck with the venerable donk and now there is a renaissance of the humble Stovebolt taking place across the USA which, one would expect, will arrive here in due course.  And we’re ahead of the play because we’ll be running a stonking big Stovie.  A 292 in fact.  The 292 cubic inch engine will be coupled with a Muncie four speed truck box – Catherine insisted on a truckie’s manual gearbox and it is her truck.  Behind the gearbox will be an Aussie Holden, one-tonner diff with a 3:1 ratio.

Whilst we’re on Holden.  Our truck originally arrived in this country in February 1938 as a knocked down, Chevy engine and chassis.  In the decades preceding the Great Depression, the craftsmen and women of Holden body works had earlier busied themselves with making saddles before progressing on to motorcycle sidecars.  In true ‘necessity is the mother of invention’ Holden turned to automobile bodies during World War One and emerged with a workforce skilled in auto body construction.  The rest is, as they say, ‘history.’  We possess a little piece of that history and here it is.

Be sure to check in on our Facebook page, Honeycomb the Truck, for more frequent updates on the progress of our restoration https://www.facebook.com/Honeycomb38Chev 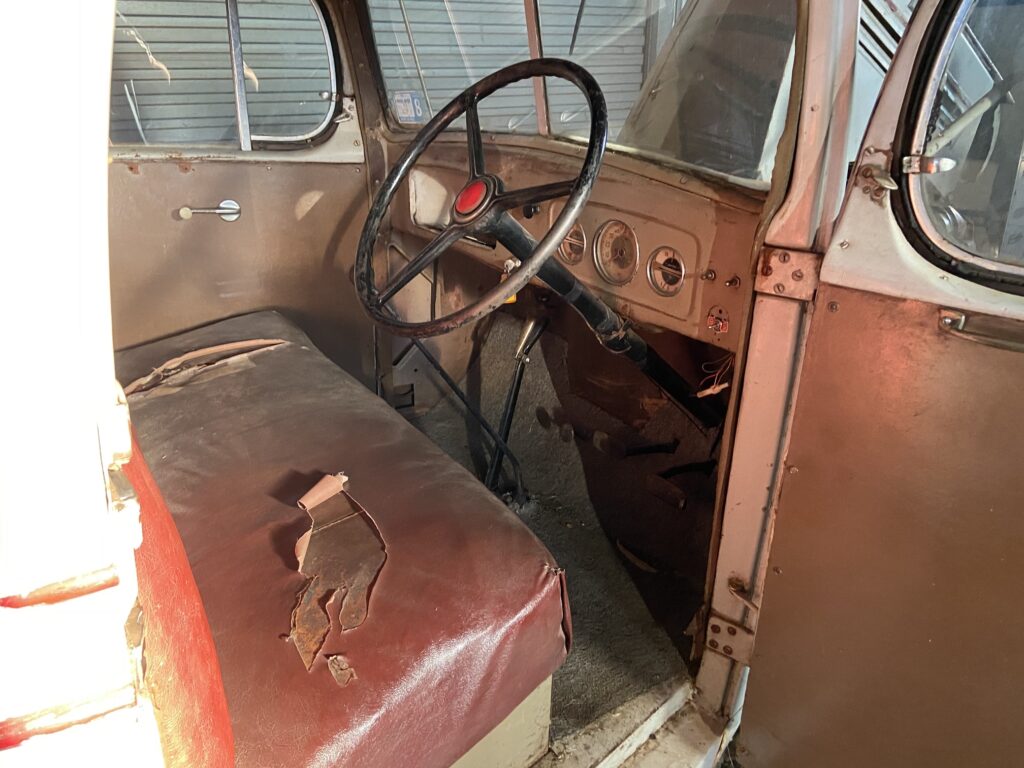 The interior of our ’38 truck. Basic, bare and beautiful. 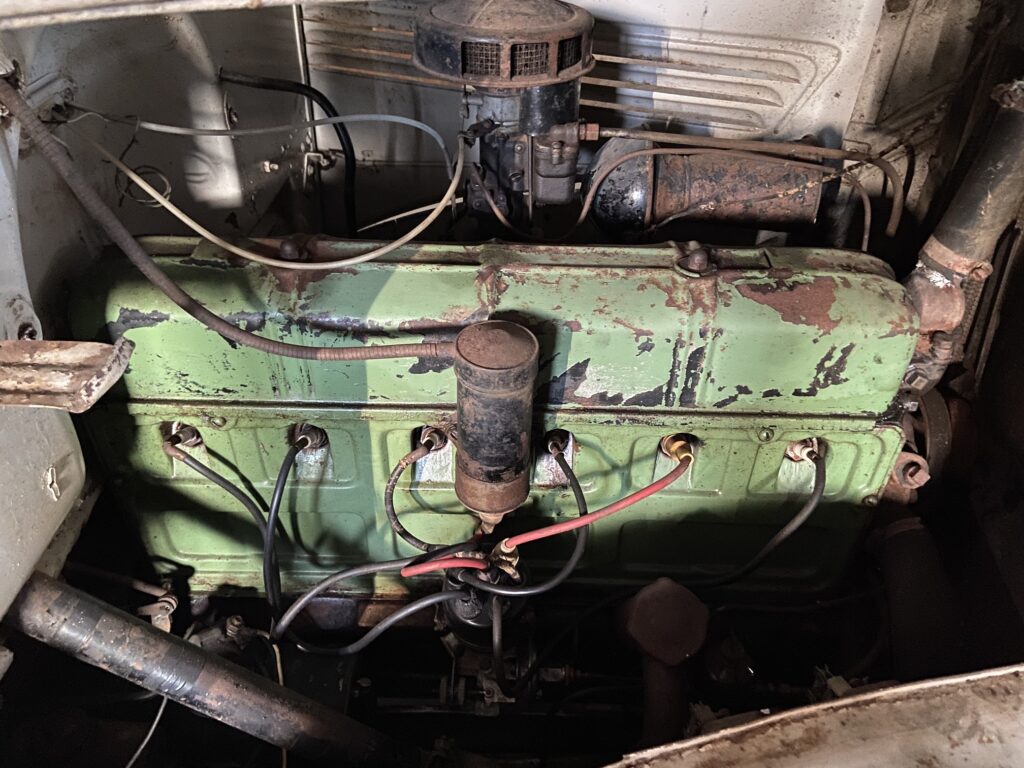 The venerable Chevy Stovebolt six. This one will be replaced with an engine that will propel us down the highway at the same speed as the rest of the traffic. 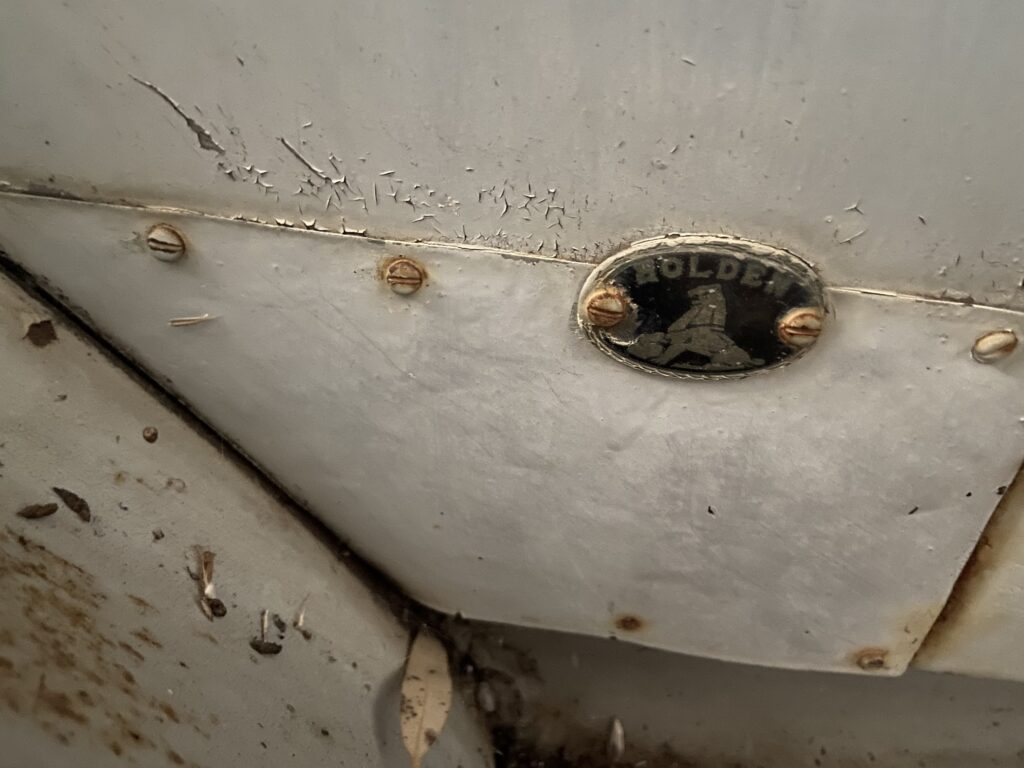 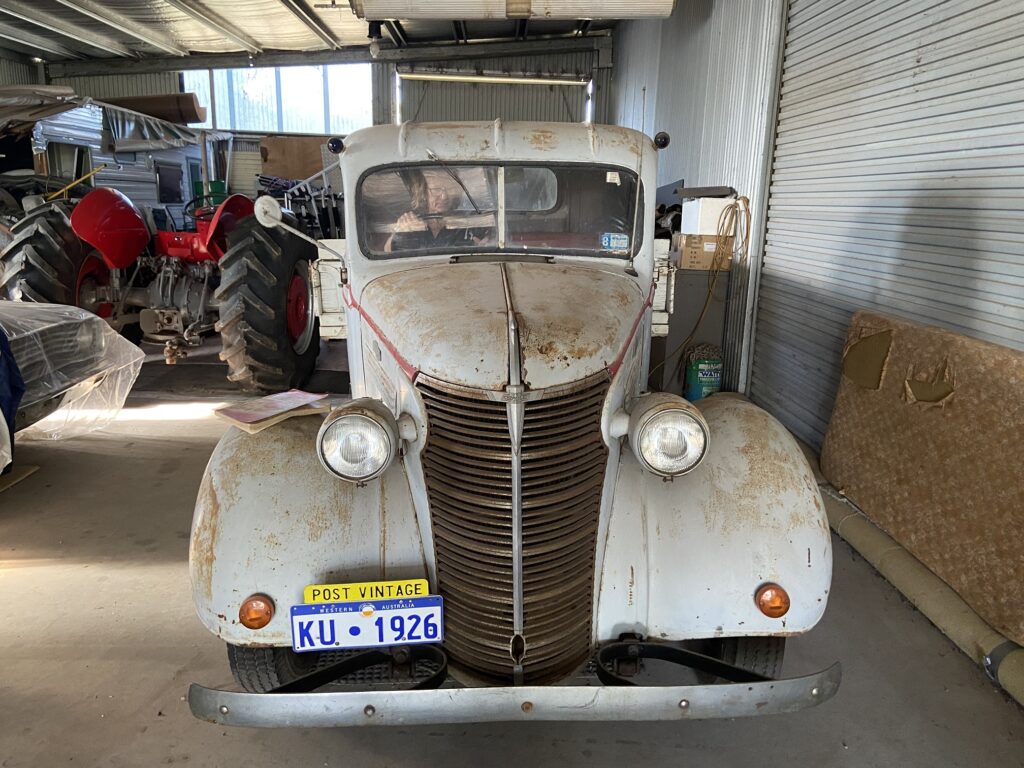 Unmistakably Chevy. The ’38 still bears the plates of its former home, Kulin, in the Western Australia Wheatbelt. 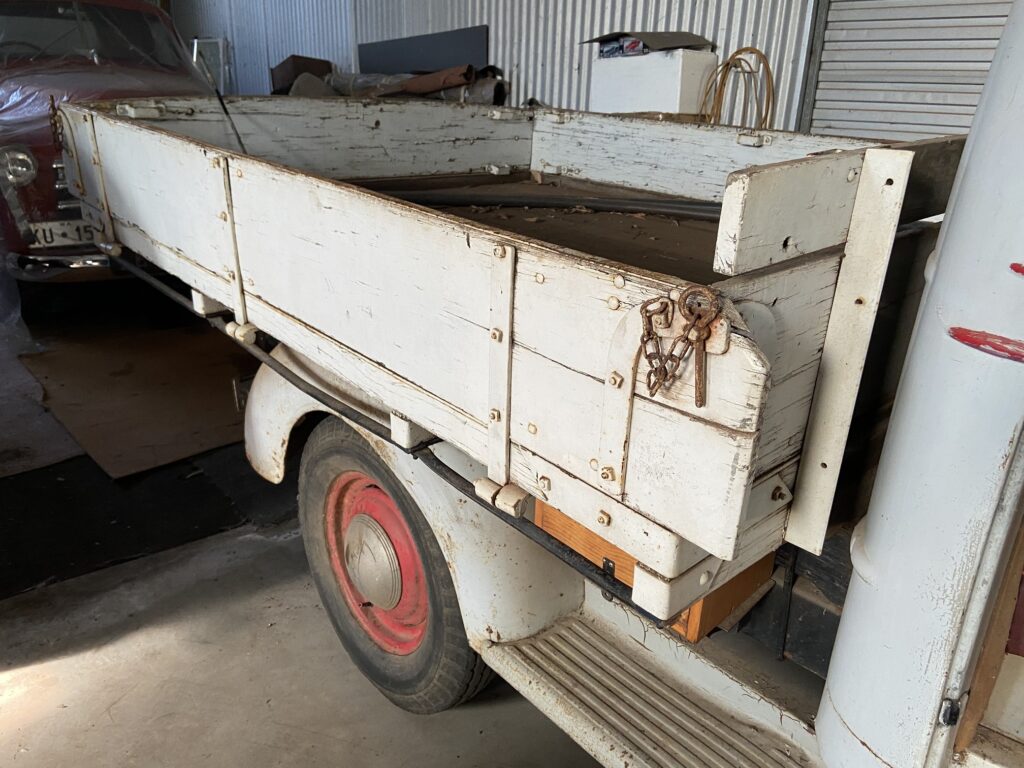 We would like to think the timber that makes up the buckboard rear of Honeycomb is original. We plan on re-using as much of it as we can. 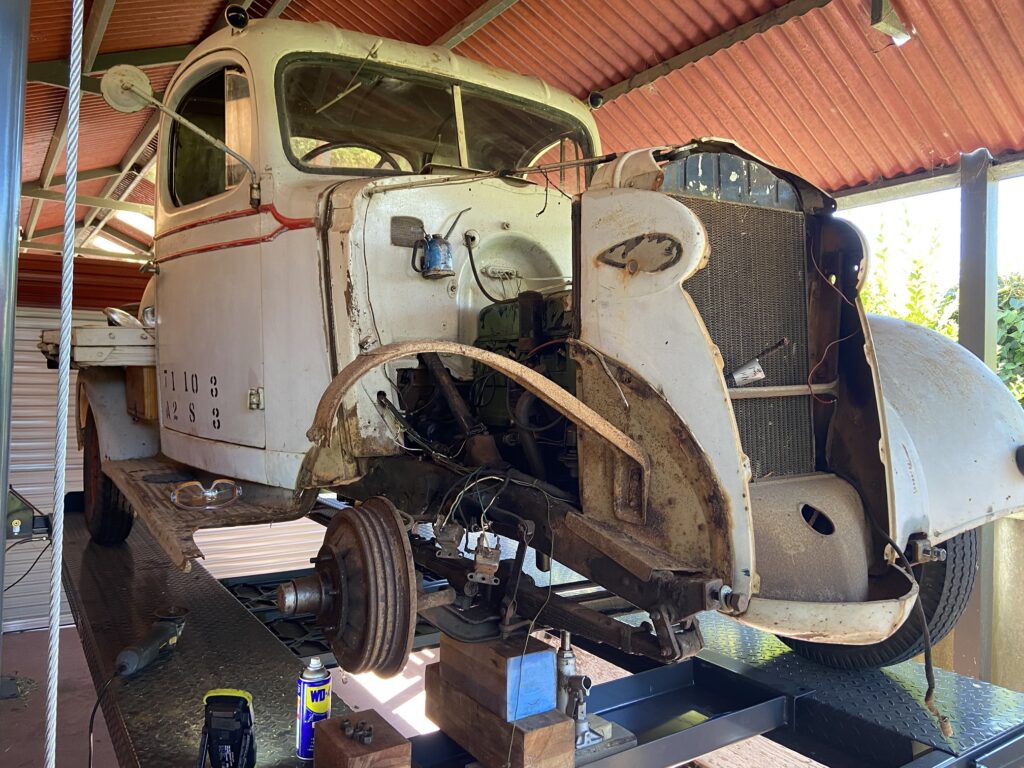 Disassembly of the little Chevy truck commenced within weeks of her arriving at our home. Note the shades of the original olive gold beginning to emerge, having been hidden since the last re-paint. 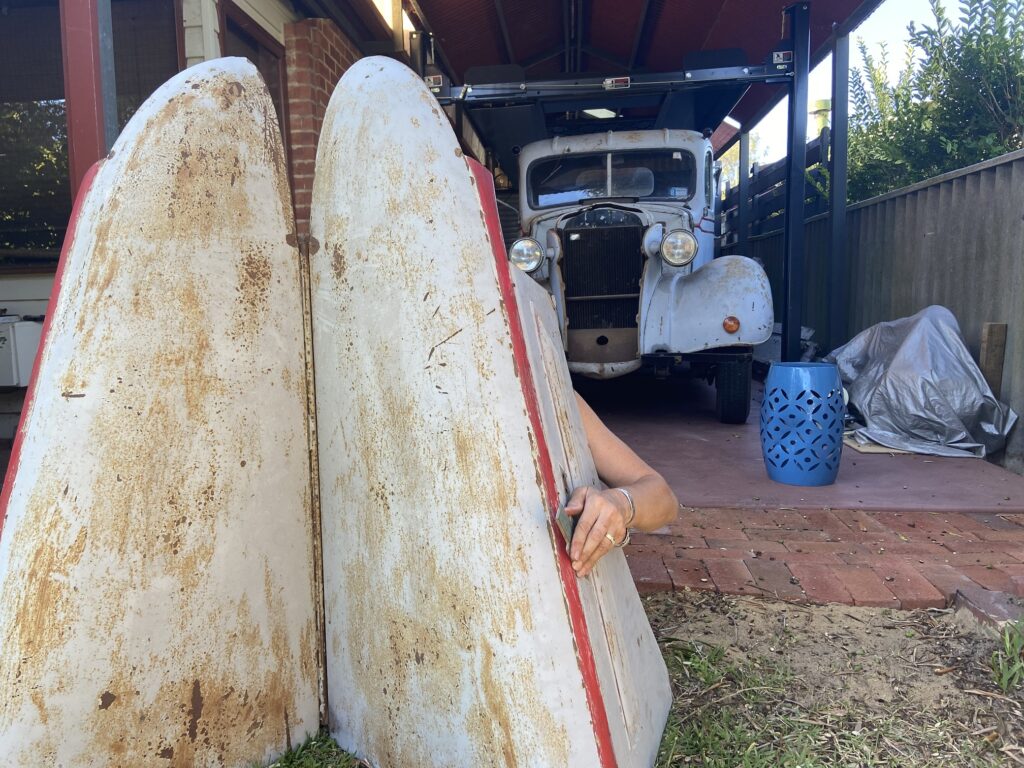 Word from our body and pain man filtered back home “Keep Dan away from that gas-axe.” Evidently I was burning away more than just rusty old bolts. 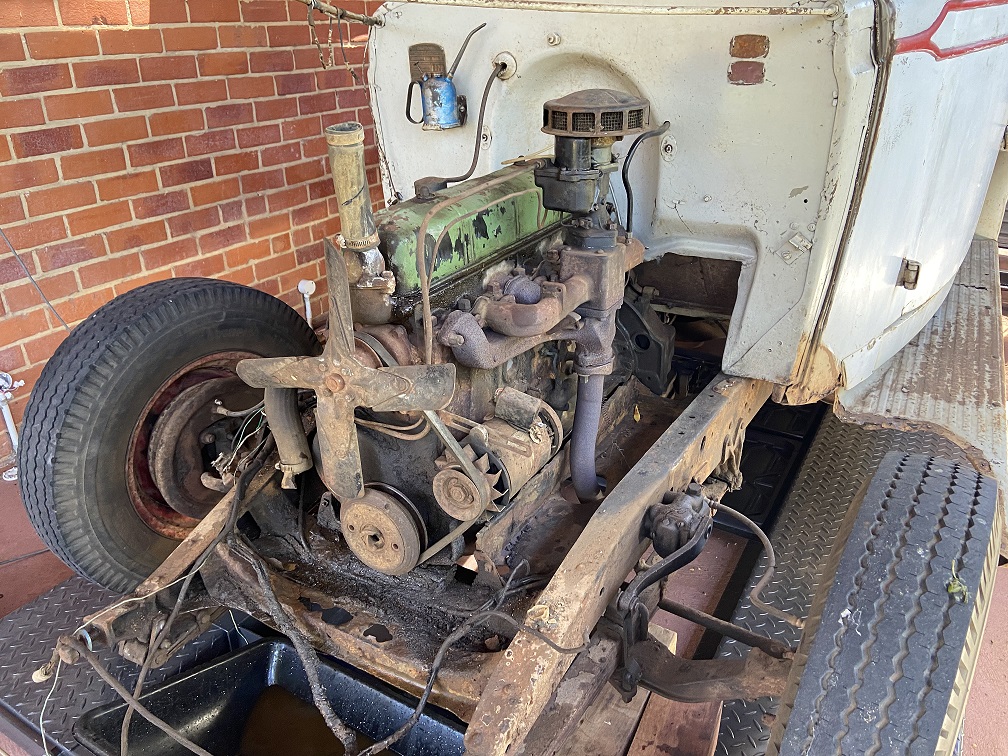 As we whittled away various body parts, the value of a life spent in the wheatbelt become apparent. Rust was minimal of an 82 year old lady. 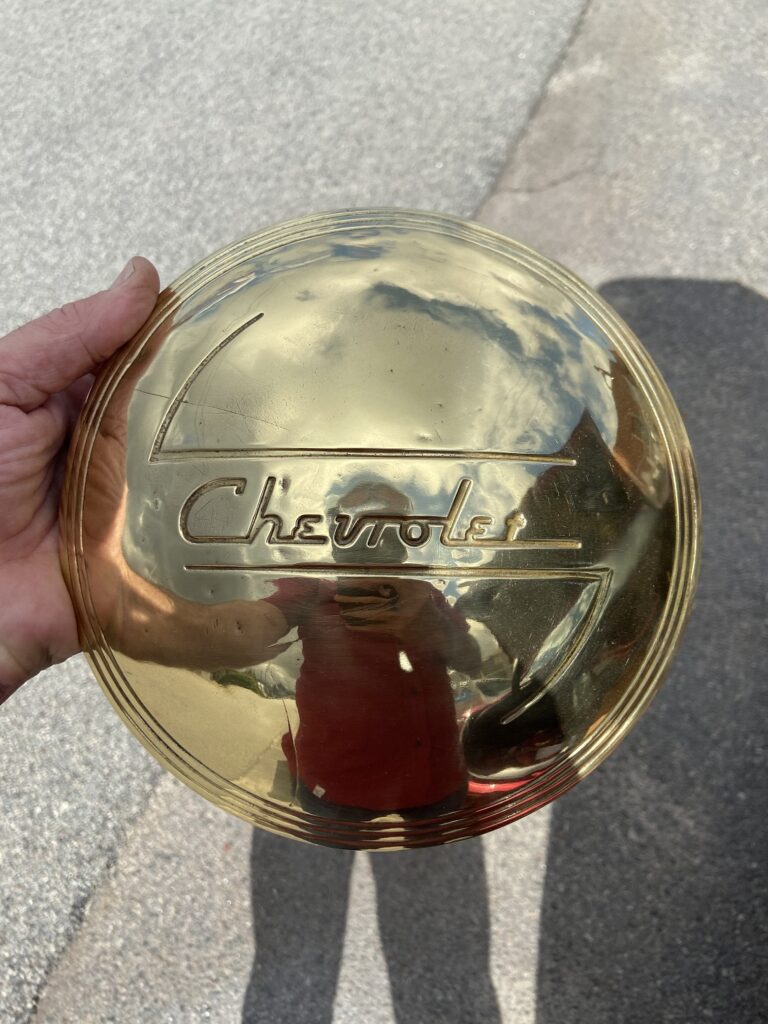 By 1938 brass was so last year. The world was turning onto chrome plating and beautiful brass was being hidden. Not any longer. We have revealed quite a few brass pieces that have been covered by pain or chrome. They will be polished and displayed in all their original glory. This hubcap is an example. 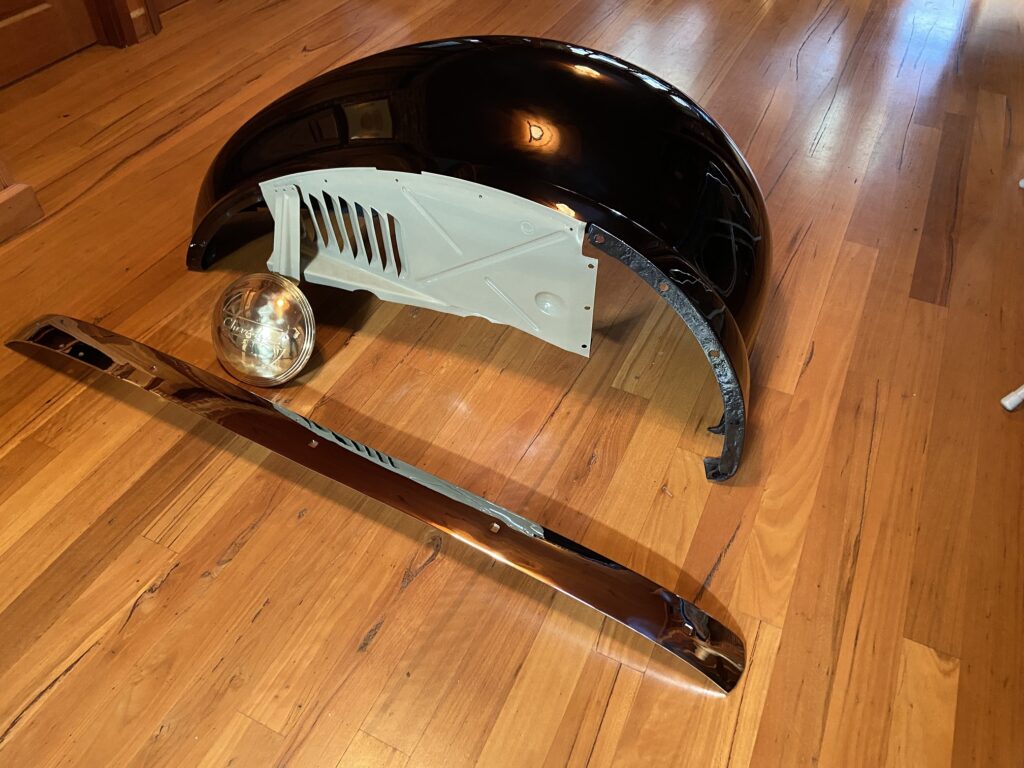 A sneak preview of things to come. Some pieces have already begun to filter home. 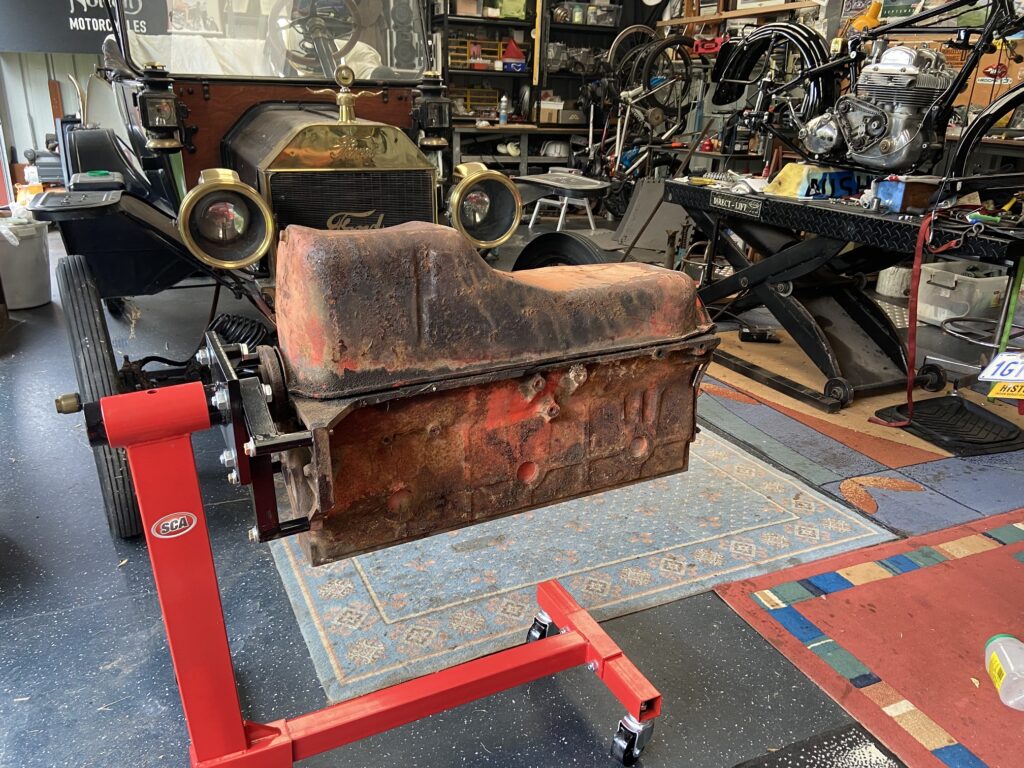 Still in the Stovebolt family this larger engine will give the little Chevy the long legs she needs. 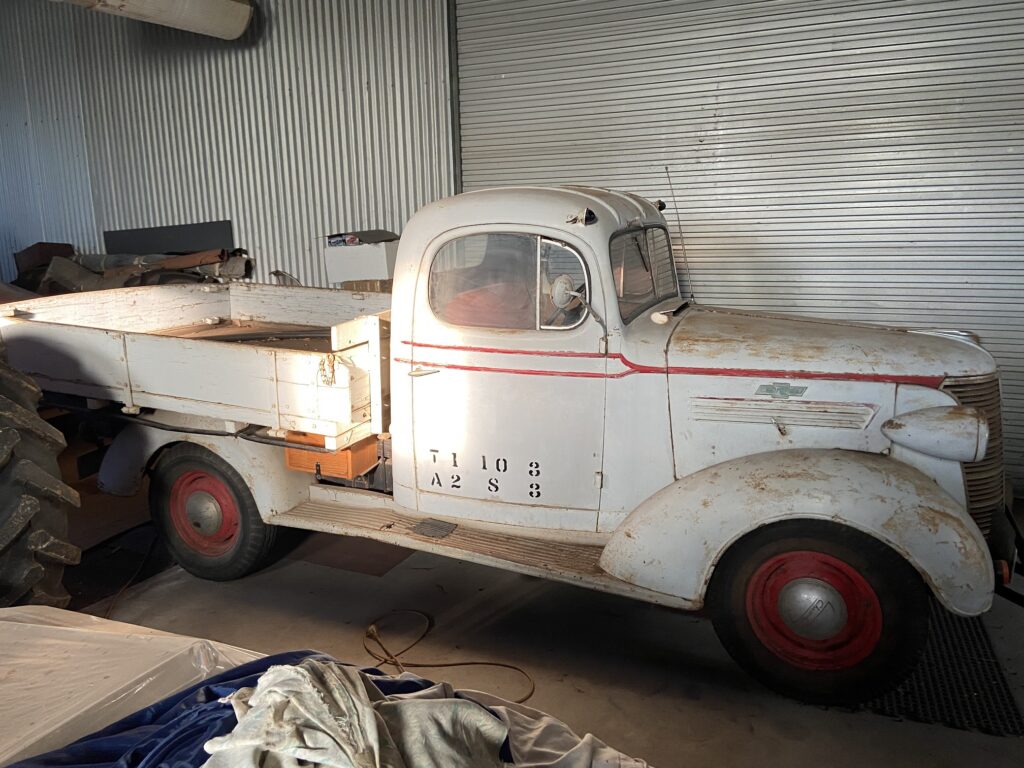