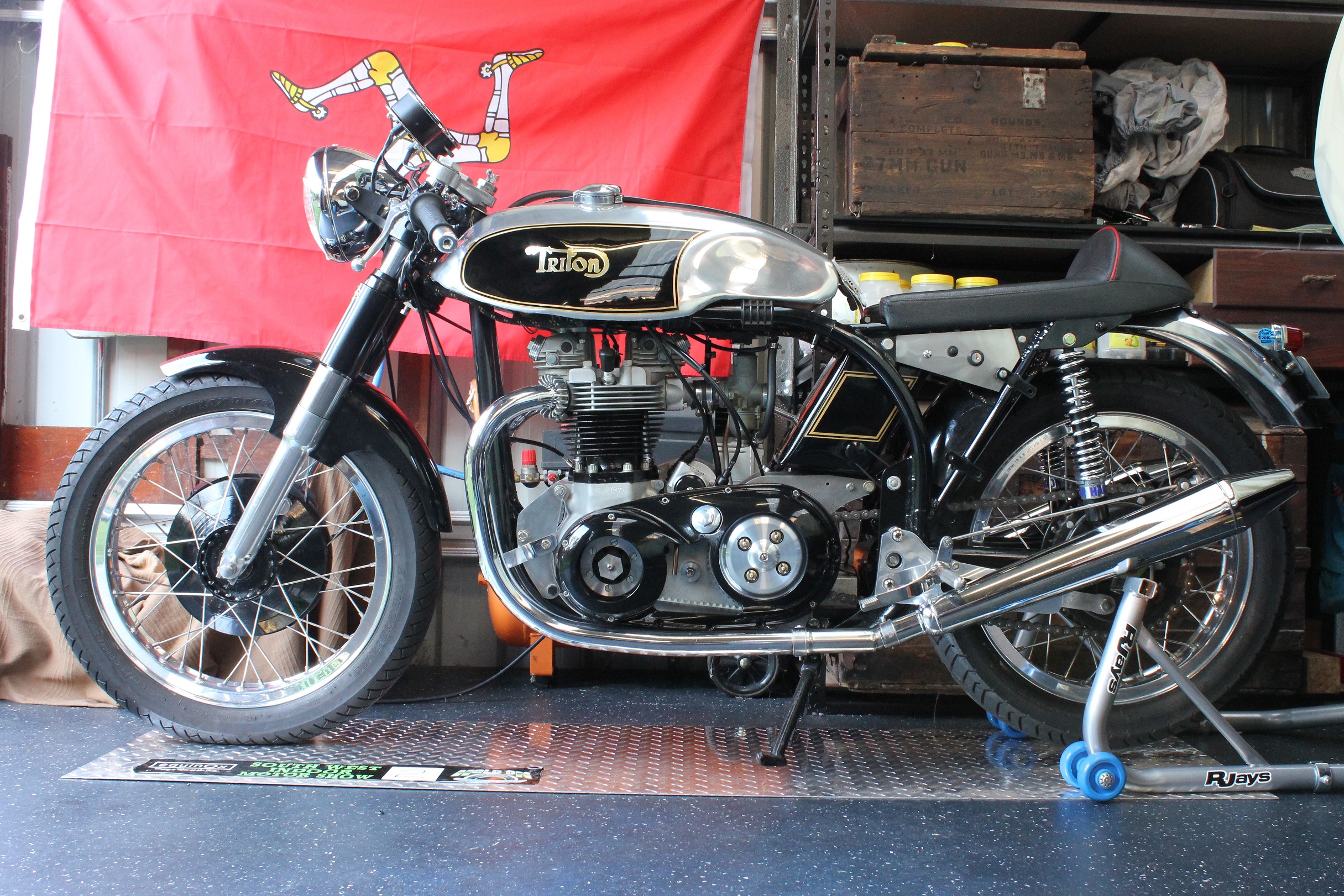 Triton motorcycles were not factory models but were hybrid bikes built in the 1960s and 1970s. Many were privately constructed but some London dealers offered complete bike. The builders fitted Triumph engines into Norton frames, and the aim was to combine the best elements of each marque and thus gain a bike superior to either (Wikipedia).

My Triton came to me as an unfinished project. It had never been licensed and the engine had only been started briefly to make sure that a) it actually ran and b) it didn’t leak oil (well not too much anyway). The bike was fitted with lots of bespoke parts, most of which didn’t agree with my tastes and would find their way into the parts bin. 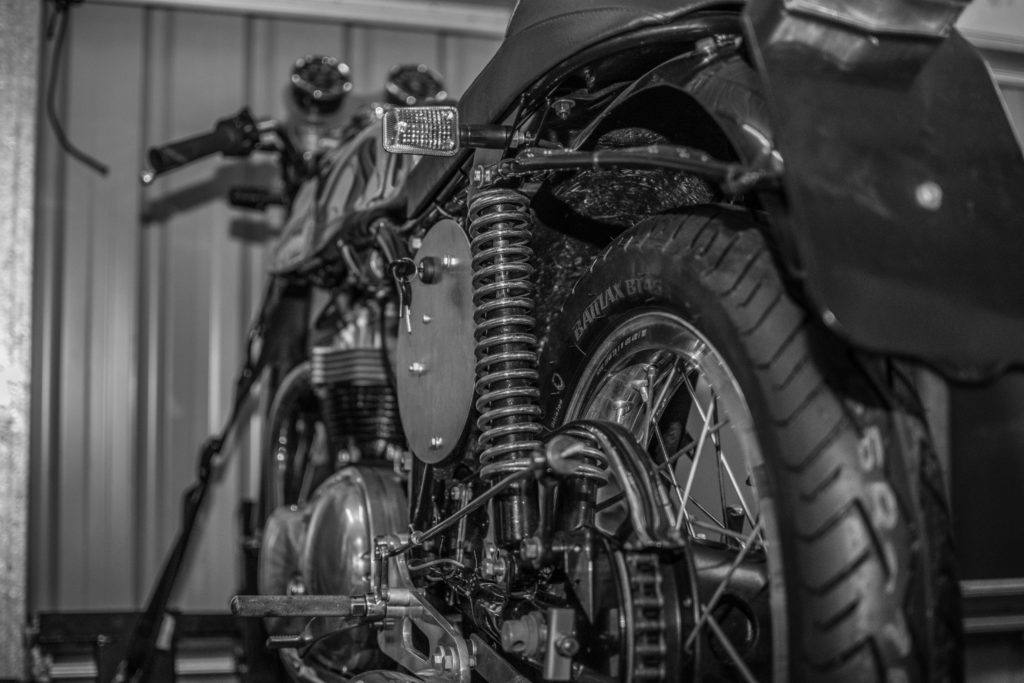 Triumph and Norton are the two best known names in the British motorcycle industry, both of which have been with us on and off for well over 100 years. If I may be so bold as to say during that period Triumph have emerged as the everyman’s motorcycle whilst Norton are the clubman’s machine, evidenced in the Manx racing motorcycle. The Manx Norton is one of the best examples of Norton asserting the company as the racer’s choice.

In the post-war motorcycle world, the British were intent on reaffirming their place at the top of the sport, but first they had to win at home and the machine designed to do this was the 500 cc Manx Norton. Even today, the Manx still sends hearts fluttering with its stunning performance and dead-sexy styling (for me anyway).

Despite the Manx engine being a ripper, by the late forties Norton recognised they needed a better frame. They employed specialist frame builders, brothers Rex and Cromie McCandless, who set about developing a frame specifically for the Isle of Man circuit – it is a Manx Norton after all. 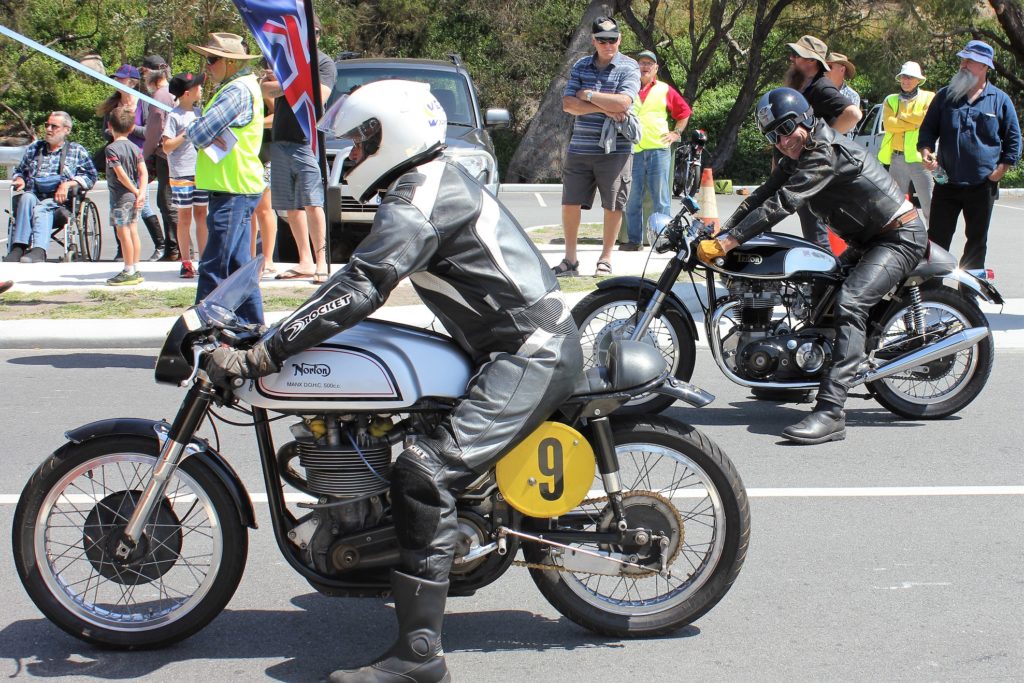 Lined up against a genuine Manx Norton at the Albany Motocycle Hill Climb. Note the similarities between the Manx and my Triton.

The new bike was rolled out in 1949 and made its debut in 1950 whereupon Norton works rider Harold Daniell declared the new frame was like “being on a featherbed.” Since that time, Norton’s double-cradle, welded steel frame has been known as the ‘featherbed.’

Harold came 5th in the 1950 Isle of Man TT (Tourist Trophy) but the first three riders were all on Manx Nortons, the die was cast, Norton would dominate the Mountain circuit for the next five years. Norton’s winning reputation wasn’t lost on the four-wheeled racing fraternity either with the Manx engine increasingly founding its way into the Formula 3 open-wheeler class. Norton wouldn’t sell the engines on their own so for every racing car that was built a functional rolling chassis was pushed aside, until, that is, some enterprising person thought to install a larger Triumph twin in the hitherto defunct featherbed chassis.

In the late forties, early fifties, the world was craving larger, twin cylinder machines so a reverse-symbiosis that produced both a small racing car and large-capacity motorcycle was ideal.

My Triton is not one of those machines, it is a modern-day re-creation, a combination of alloy from a bygone era and modern steel. The engine was once in a 1956 Triumph Thunderbird although it has been tweaked considerably since the engine found its way into my possession.

Whilst the Triton is founded on mid-twentieth century parts-bin specials, there has been a renaissance and specialist manufactures who are turning out what are essentially new bikes. Made in Metal and Dresda are two manufacturers worth having a look at for some very nice machinery. Elsewhere, in the ultimate testament to the enduring nature of an almost 70 year-old design, people are putting modern Hinckley Triumph twins into featherbed frames.

In a modern touch, my Triton uses a hand-made replica featherbed frame made by Ken McIntosh in New Zealand. To the untrained eye, indeed to many a trained one too, my frame looks like the original item except it’s made from modern tubing and advanced welding techniques that weren’t available to the craftsmen of old. Replica featherbed frames are common-place but they vary in quality.

Original featherbed frames can be bent, broken, rusty and fatigued. My frame has never been cut, crashed or cartwheeled (yet). It’s a top quality, strong piece of kit that is taunt and tracks brilliantly when pushed hard. Indecently, a McIntosh bike currently holds the record for the fastest lap of the Isle of Man by a Manx Norton in the hands of Kiwi rider Bruce Anstey.

I have owned a 1956, 6T Triumph Thunderbird for many years and before that it belonged to my father. Back in the late 1970s Dad and I both rode 750 Bonneville’s, they were great days on great bikes but we moved on and our Triumphs were eventually consigned to memories, until 1997 when Dad spotted the T-Bird and decided we must have it!

The Thunderbird preceded my Bonneville by 21 years. It’s heavier, longer and lower than the Bonny, steers slower and naturally has less power. I used to think “if only I could get this thing around a corner” and began to appreciate the idea of the Triton. My mind increasingly turned towards building such a machine but conflicting emotions would take hold whenever I contemplated how much of the Thunderbird would be consigned to the rubbish pile after I robbed the engine for service in a Norton frame. Cognitive dissonance is a great motivator for doing nothing. Aside from being road-going, national treasures, classic Triumphs are aesthetically pleasing and trending towards the valuable.

My 1956 Thunderbird – too beautiful to pull apart to construct a Triton.

No one is going around urging owners to junk functional bikes to make hybrid specials, to the contrary, I would probably be picked out of the classic motorcycle club to which I belong should I even begin such a project. And, as if I need any more reasons, one of my favourite photos of my late father depicts him sitting on the Thunderbird with his trusty Border Collie alongside. No, if I wanted a Triton I would need to build one from parts or find a fully assembled machine. I ended up settling for something between the two. As mentioned earlier, the engine was originally in a Thunderbird, indeed, the engine number in the Triton is so close to the one in the Thunderbird they could have been bedfellows.

The engine in the Triton’s is commonly referred to as a ‘pre-unit,’ meaning the engine and gearbox are separate units. In 1962, for the first time since being introduced in 1937, the engine and gearbox were joined together in a common crankcase and were thereafter referred to as unit constructed engines. Unit constructed engines are more compact and somewhat lost in the feather bed frame compared to the older pre-unit items. Debate goes on as to which is the engine best suited to the Triton but it simply boils down to personal preference. 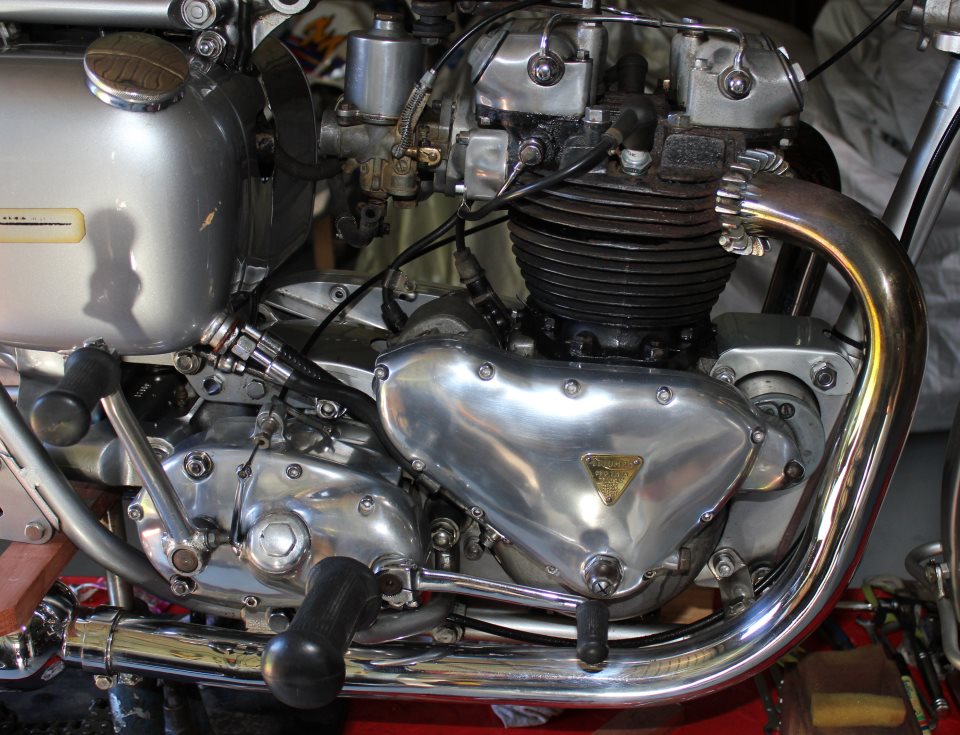 This is the engine in my Thunderbird. The gap between the engine and gear-box denotes this as a ‘pre-unit’ Triumph.

Triton aficionados and café racer tragics will recognise this bike has a host of refinements, including the highly desirable combination of Norton Roadholder forks, Akront alloy wheels and a four-leading shoe drum brake. What’s not so recognisable is the five-speed gearbox, belt primary drive, what is not so evident is a host of improvements hiding below the surface which will be discussed further in separate links.

Evidently my bike had been sitting for some time, it was covered in a good layer of dust and had the obligatory puddle of oil under the engine but, despite the neglected appearance, it was obvious the machine had the goods. The engine was held together by all new fasteners and, brushing the dust away, the cases looked bright and new, clearly having been blasted prior to reassembly. The lack of oil on the external engine surfaces, save for the sump at the very bottom, confirmed it probably had not been run for any length of time since assembly. The presence of little rubber knobs on the Dunlop TT100 tyres reinforced this.

The bike had been put together by a couple of legends of WA motorsports, one a mechanic, one a racer. Both are now in their eighties and still going strong. I hold onto visions of two old motorcycle wizards tinkering into the night working on their creation over cups of tea, which adds to the romance of a Manx-bred racing machine.

I had great confidence in the quality of the build which, by and large, remains with me however I must say I have rebuilt just about everything on the bike, either through necessity, performance experimentation or simply my desire to customise the bike to my tastes.

It is a rolling test bed for me to refine and tinker with before I take it out for a good thrashing. Stay tuned for reports on various events where I’m permitted to ride the bike in the environment for which it was intended, the race track. 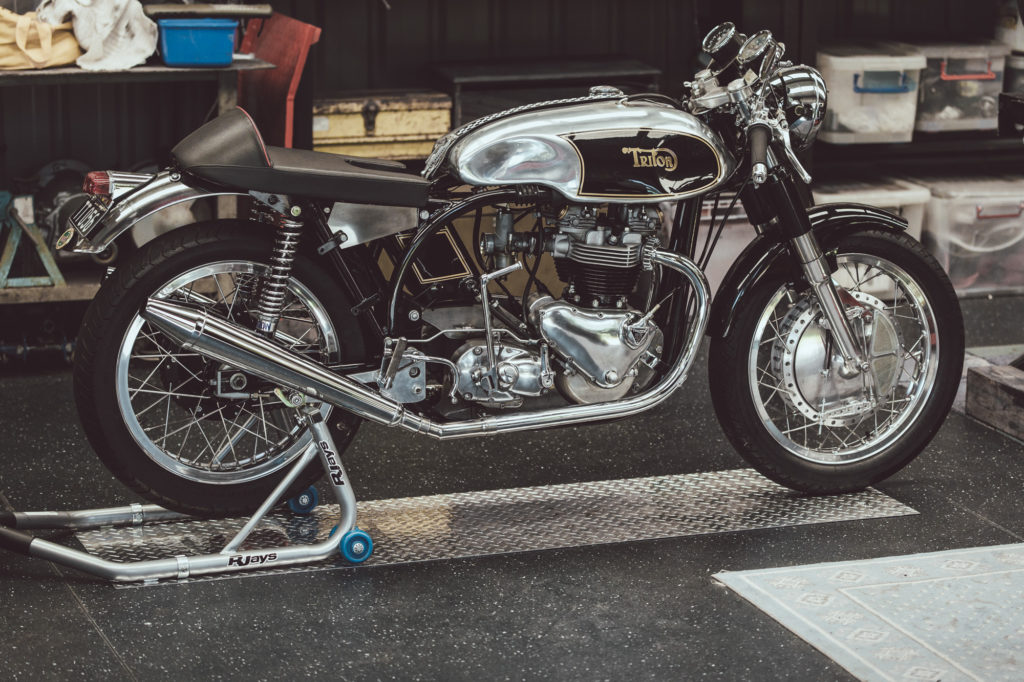 The Triton as she stood at the time of writing. Photo by Jeremy Hammer.