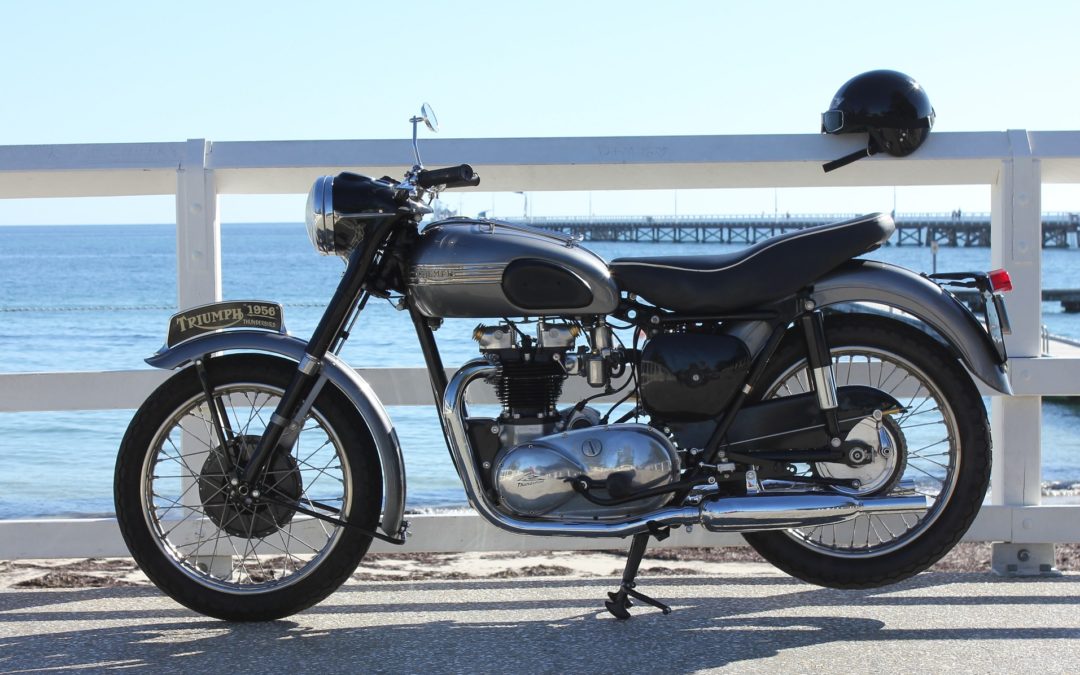 Those keen of eye may have noticed frequent references in various Motor Shed discourse about our ’56, 650 Triumph Thunderbird.  The bike certainly comes in for a mention in Rebuilding the Ariel so we thought it was time to string some excerpts together from the book to keep the Triumph fans out there happy.

The star of Rebuilding the Ariel is, of course, an Ariel motorcycle.  It is another one of my father’s former bikes purchased out of Tasmania in 1989 because Dad had one when he was 17 and felt like revisiting his youth again at the age of 55.  Despite the Ariel being both a capable and desirable motorcycle during my father’s youth, what Dad truly longed for was a Triumph Thunderbird. With its larger 650 cc twin cylinder engine, the Thunderbird was known as a true superbike of the era, capable of 100 miles per hour. 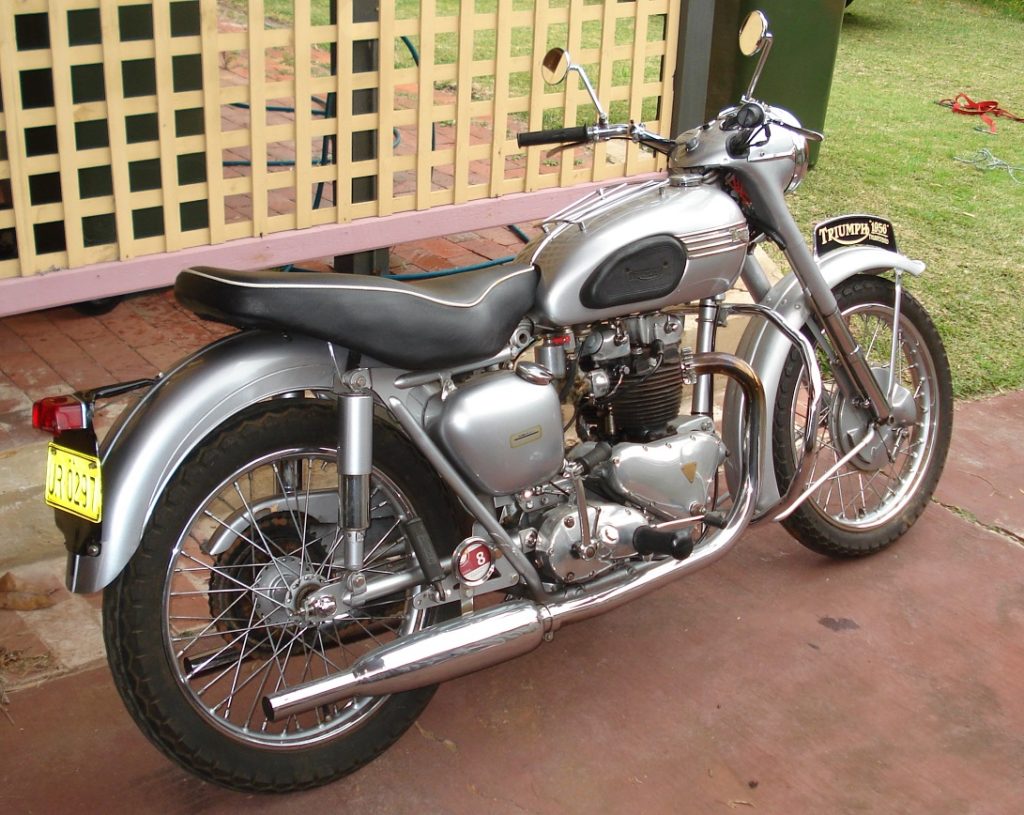 This photograph was taken in 2010, after about 12 years ownership. The bike still scrubbed up okay but oil easily found its liberty and rust was forming on the barrels.

Dad finally managed to secure a Thunderbird a few years after the Ariel. It was a particularly nice example of a 1956 machine. The motorcycle is fitted with an English SU carburettor and finished in all-over silver, including the frame, which I was told indicates it was an export destined for Australia but I have since discovered that to be a myth. There are a few other myths about Thunderbirds that should be cleared up, or at least introduced here.

The original Thunderbird, if indeed there can be such a thing, was not a motorcycle, nor was it a Ford convertible, it was a creature from within the culture of the indigenous people of North America, a mythical giant bird that was able to cause the sound of thunder by flapping its wings together. It combined the freedom of being able to take to the air with power and grace, yet possessed supernatural powers that commanded respect and adoration. 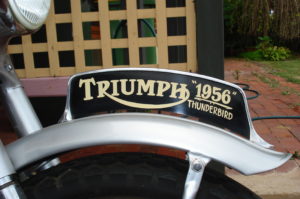 Of course the name Thunderbird did not derive until after colonisation whereupon an English translation was put to the creature that was said to carry glowing snakes that were speared into the ground as lightning bolts. Adding to the mythology, the Thunderbird was said to be intelligent, wrathful and powerful, not to be trifled with and generally avoided at all costs.

The Triumph Thunderbird is none of these things, but, it is one very cool motorcycle.

My stepson is constantly amazed when we’re about and about on our bikes. People go out of their way to take a look at the Thunderbird and make all sorts of comments about how nice the bike is. Some recount stories of daring feats committed on Triumphs, whilst others ask if they may photograph the bike. At 19 years of age, James was slightly perplexed by all the attention the old bike gathered. He saw a motorcycle that was difficult to start, is not all that fast, doesn’t particularly corner well, has poor brakes and leaks oil.

She did, and still does, leak oil.  Despite what was apparently a fine restoration, the Thunderbird regularly needed some tweaking to keep it in order, not the least of which was the odd dribble of oil. Anyone who has ever owned an old British bike, and a good many folk who haven’t, will testify to their capacity to spill their guts from orifices designed to contain lubricant rather than give it liberty. The Ariel was particularly bad for this.  For the first decade of its time with us, the bike stayed in Dad’s shed on the farm.  The occasional ride would coat the bike in dust thrown up by the long gravel driveway.  Dust and oil are not good bed-fellows, they are in fact the enemy of concourse.  Whenever I visited the farm I would usually get straight into some motorcycle maintenance, either with or without the Zen (long story – literally).  Maintenance always started with a good degrease to get rid of all the oil and built up gravel dust. 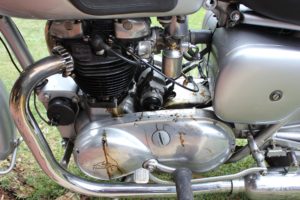 Under the dust and grime lived a very nice example of Triumph’s flagship superbike for the fifties.  The Thunderbird had been lovingly restored by a member of the Vintage Motorcycle Club in Perth. At the time the bike was restored I was in fact a member of that club but there was over 450 members so I was unable to place him. Sadly, the gentleman who restored the bike never got to fully enjoy it as he passed away soon after completing the restoration, receiving “the big chequered flag in the sky,” as the club used to so eloquently put it whenever they lost a member.

The bike was subsequently acquired by an ex-patriot Englishman who very soon thereafter decided he would migrate back to the Old Country. He loaded all his goods and chattels into a container and shipped it all back to the UK. He then gathered up his family and, similarly, shipped them all off ‘home.’ Evidently things didn’t go as well as expected. Upon arriving in England, the gentleman decided things weren’t that bad in Australia after-all and resolved to return. They actually left the UK before the container arrived, and returned to Perth. It took another two years before the container was turned around and arrived back in Western Australia, whereupon the Thunderbird was removed and promptly sold – to Dad.

I acquired the bike in 2009 when Dad’s hips and knees prevented him from starting and riding it.  I rode the bike frequently for another eight years by which time it was starting to look a bit shabby and still leaked oil everywhere.  I never did like the silver on silver so, in 2017 I resolved to give the machine a freshen up, a makeover if you like.  Like many things that come into my garage, a simple makeover quickly turned into a full nut and bolt restoration.

More about that later, but here’s a sneak preview…

A silver tank and guards on a silver frame didn’t really agree with me so, in 2017, I pulled the bike down to freshen up the engine and re-do all the paint. 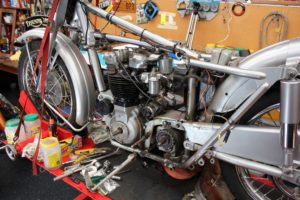 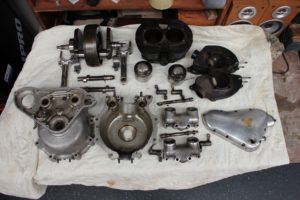 Triumph introduced their 500 cc twin cylinder engine to the world in 1937. In 1949 the Speed Twin engine was punched out to 650 cc and the Thunderbird was born. This is what my Thunderbird engine looked like when stripped to the last nut and bolt. 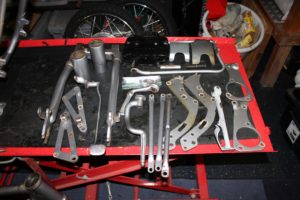 Parts ready to be sent for a coat of lush, gloss black paint. 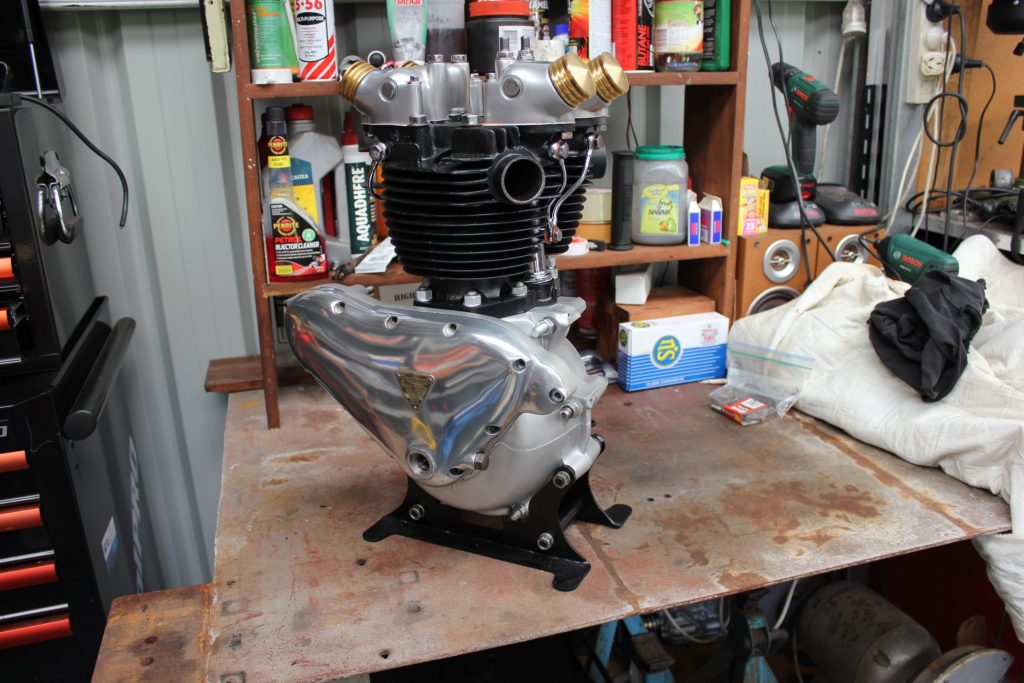 This 650 cc parallel twin engine is such an icon it could almost be put on a plinth within the Guggenheim Museum.

The effort starts to pay off when the bike begins to be reassembled.