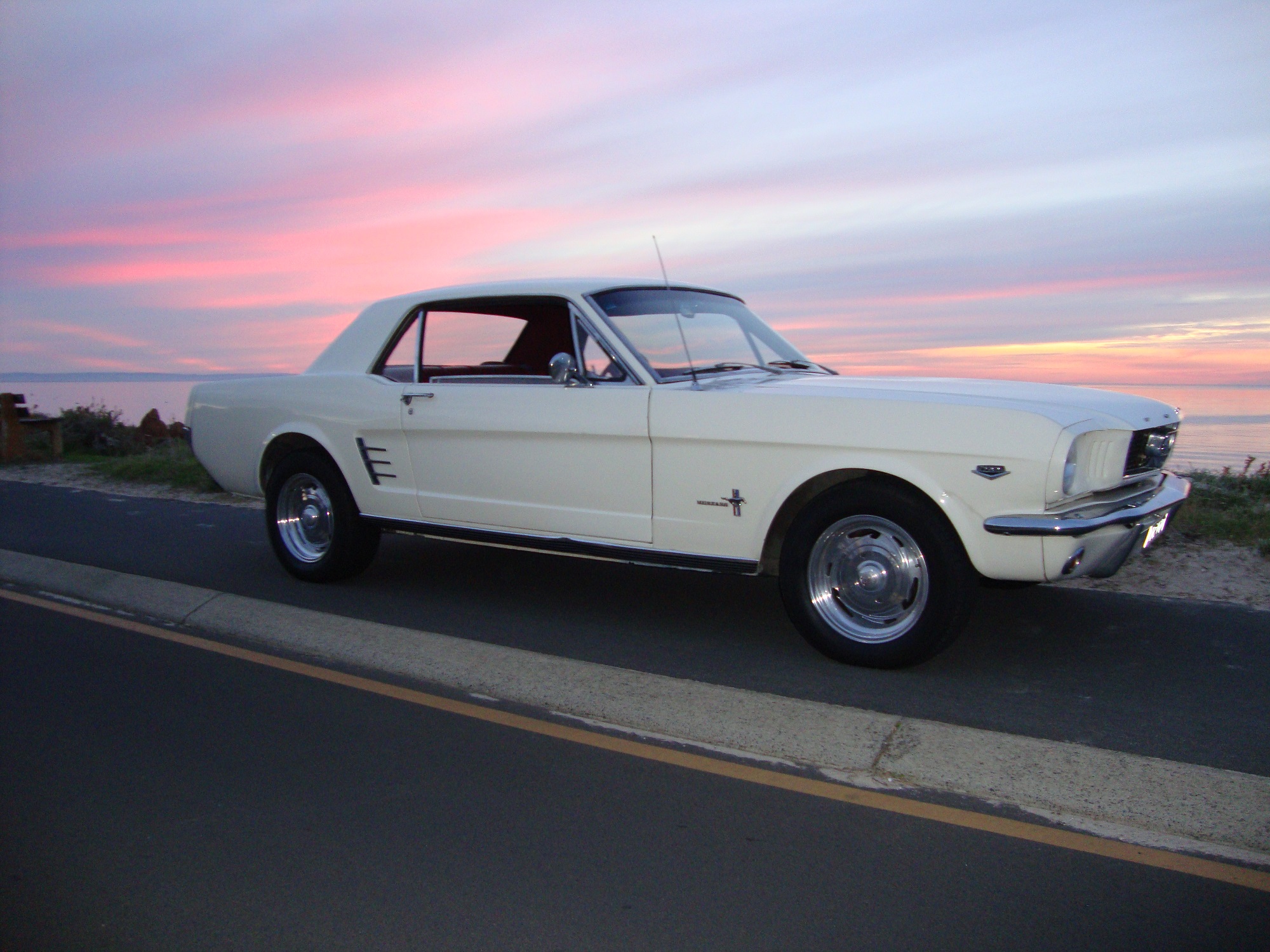 The Motor Shed Mustang has been with us for about six years so updates for this project will look forward and back with equal measure.

In the six years that we have owned the car it has spent a lot of time out of the shed, often by design as things are a bit cramped in there of late.  The most recent period of absence was a long one, 18 months to be exact, but the car has recently been returned to the shed with all new brake hydraulics, a wiring harness in place and a 2.5-inch stainless steel exhaust.  We are getting very close to registering the car and we are looking forward to sharing the details of the restoration but first let us introduce our 1966 Mustang coupe.  You might like to grab a cup of tea and some biscuits because it’s a long story.

Ever since I was a child I longed for the day I would own a Mustang.  A trip to the Perth metropolitan area wasn’t compete until I had laid my eyes on at least one Mustang.  As I grew older my passions gravitated more towards motorcycles than cars, then, of course, along came kids of my own.  One of those kids is my step-son who was fostering his own dreams of owning a special type of car.

Like me, James’ dream car came to prominence through the Australian Touring Car Championships.  For me it was the total domination by Mustang coupes at the hands of drivers like Beechy and Geoghegan for five years from 1965 to 1969, for James it was Richards and Skaife in the Nissan Skyline in the early nineties.  Funny how history repeats, generations apart.

James was the first to realise his dream of owning a Bathurst-inspired race car.  He sourced a well-looked after, 1990 Nissan ‘Godzilla.’  It was a mighty car, I can’t remember driving anything quite as powerful as that Nissan.  Sadly, a few too many launch starts took their toll on the highly tuned engine and it developed a terminal knock within about three months of ownership.  Rebuilding the engine was cost-prohibitive which left James having to sell the Nissan with a blown engine for about half what he paid for it, which left him with a significant debt and no car.  It was a heavy impost for a 20 year old on the minimum wage, but I came up with a plan.

I said, “Listen mate, I’ve always wanted a classic Mustang, you need a car, what about if I buy a project and we can work on it and you can drive it until you get back on your feet then I’ll take it over?”

James’ eyes lit up and together we began trawling the classifieds for a suitable project.  It wasn’t long before James noticed all the cars we were looking at were automatics, as a young bloke he was keen to have a manual.

“Do they have air-conditioning?”

James sat there for a while mulling things over in his head and then said, “Nar, don’t worry about it, they are not my sort of car.”

I was stumped.  My Mustang dream had been so close and then it was gone.  That’s when his Mum spoke up.

“Darling, if you want a Mustang that bad you should buy one.”  I’m back in the game. 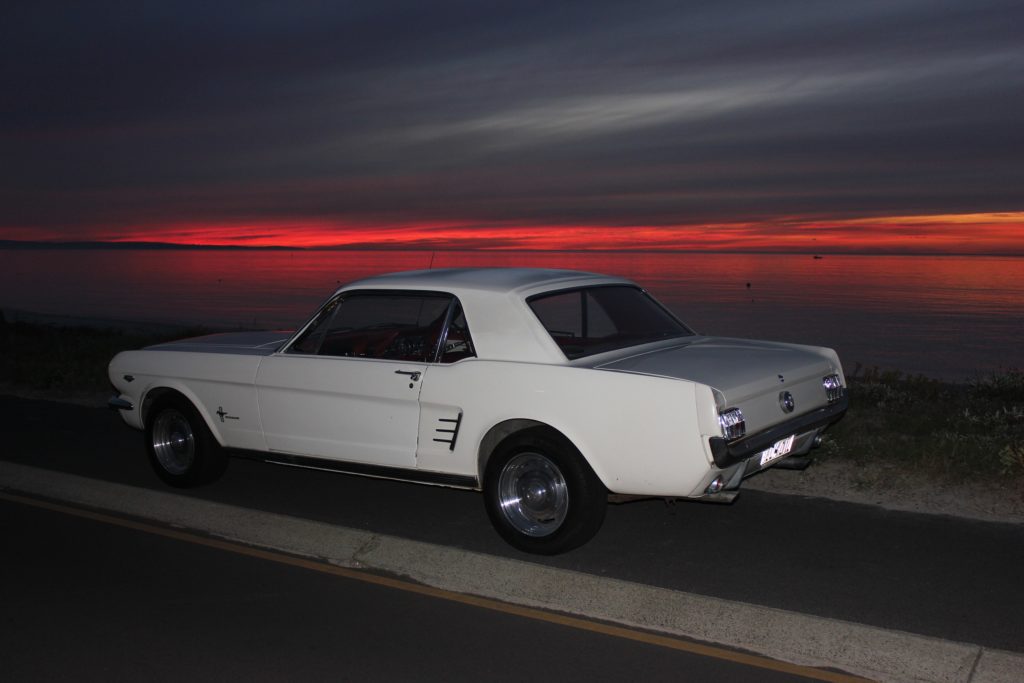 Good from afar, but far from good.

After a couple of false starts, one of which involved a $1,000 deposit going across the country and then back into my account when the owner got a better offer, we finally settled on a 1966 coupe.  It had to be a coupe, that’s what Beechy and Geoghegan drove in the touring car championships nearly 50 years before and, by god, that’s what I had to have.

In 1966 Ford Australia was due to release the all new XR Falcon.  It was a major change in model and early signs were the buying public were not that keen so the Ford Australia marketing department came up with a campaign that connected the new Falcon to the Mustang by introducing the car as the “Mustang bread Falcon.”   To sweeten the deal it was resolved to put a Mustang on the floor of each of the 430 Ford Dealerships in Australia, which was no small undertaking as each one of those 430 Mustangs started out as left-hand-drive cars.

To meet the challenge of converting the cars, Ford Australia set up a workshop next door to the Homebush plant in Sydney.  Converting the cars proved to be a difficult, expensive task and eventually the idea was shelved, but not before some 200 odd cars were converted.  No one is sure of the exact number of Mustangs carry the Ford Motor Company of Australia identification plates but mine is one such vehicle.

I purchased my car sight unseen.  I was told by the owner that the car was a factory converted vehicle but, when I first laid my eyes upon it, I felt this surely couldn’t be the case, the conversion was completely agricultural.  If I thought the conversion looked rough, the drive was even worse.

One of the defining features of Falcons of the sixties and seventies is the feel of the steering.  It was much better than the equivalent offered by Holden and Chrysler but my Mustang was simply awful to steer.  Added to this, the transmission was slack and spongy.  The car was very much a disappointment. 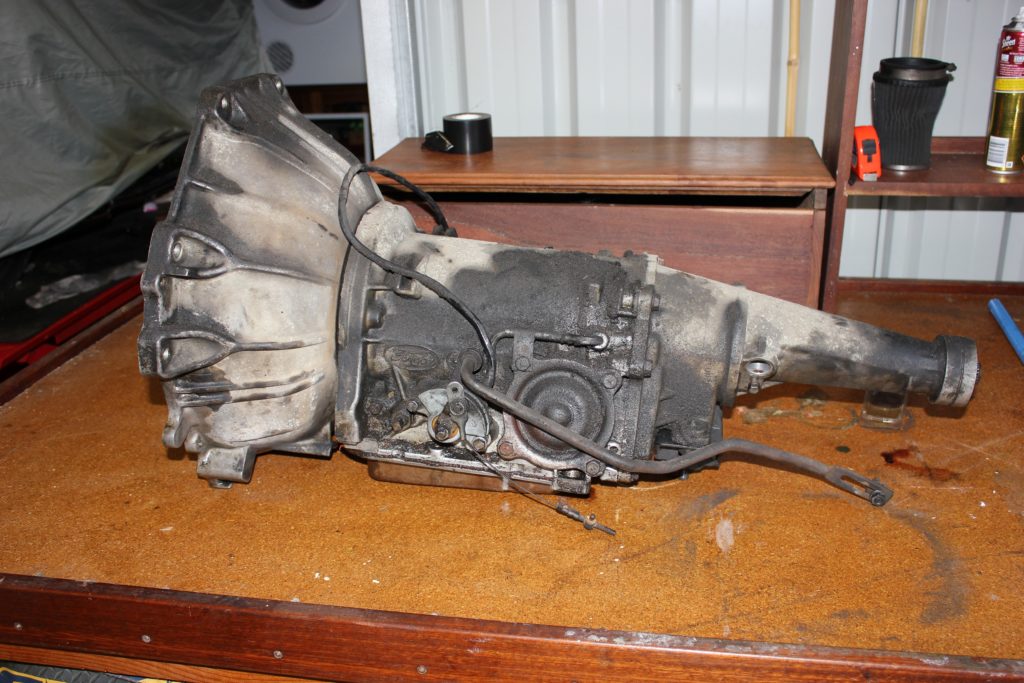 Within a few days of getting my car home I decided I could not live with the slushy transmission.  The car was elevated and I took the transmission out, dropping it on my hand in the process.  It had been a while since I last removed a transmission so it was with much glee I shouted to my wife as the transmission was slowly lowered toward the floor as I bled the hydraulic trolley jack the tranny was perched upon.  At precisely that moment, the transmission got hung up on something and the jack continued to lower.  The transmission rolled off the jack and crashed to the floor, my hand was conveniently placed to break the fall.  It was one of those moments where I daren’t look at the injury.  By the time I did eventually take a peak, the blood had begun to ooze through the black grease that covered the wound.  It was a sorry site but I had the transmission out of the car and on the floor – success.

A friend well versed in the art of transmission rebuilds came to my house on two or three occasions, spending about two hours on each visit.  Before long the transmission was looking almost new but the engine looked hideous, so I resolved to tidy that up a bit too.

And that’s how things got started! 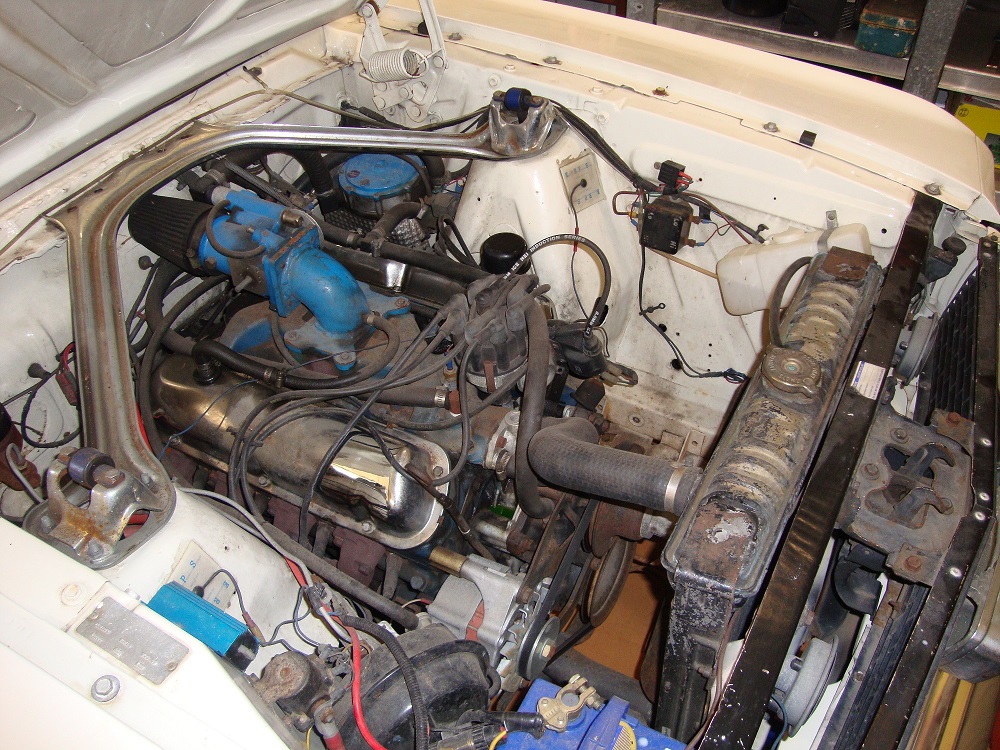 The old Windsor 289 was on dedicated LPG and was a strong runner – she just looked a bit crook so it had to come out.