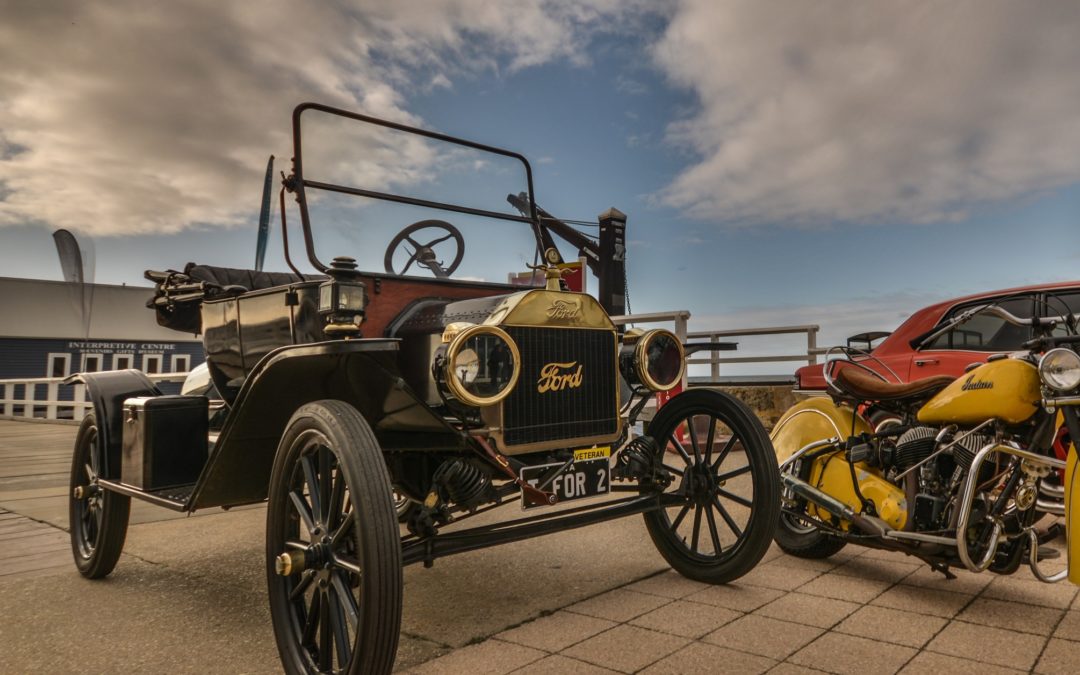 In the few months since we started the Motor Shed site, our Model T has remained quietly undercover, out of sight and out of mind. With the Red Dust Revival looming at Lake Perkolilli in September it’s almost time to pull the cover off and begin to prepare the old girl. It’s also way past time we introduced you to our Tin Lizzie*.

When one thinks of a roadster, thoughts invariably turn to grace and speed, an open-air, two-seater often with some degree of racing pedigree. What most people do not realise is, long before the automobile was invented, the term roadster was originally used to describe a horse that was deemed suitable to ride on a road (yes there were roads before the automobile, you can thank the Romans). It is unclear when the first roadster motor car came into being but, in 1909, just as the automobile industry was gathering momentum, Ford introduced its version of the early sports convertible. Barely five years later, our Lizzie rolled off the production line at Highland Park, Detroit, Michigan.

Long before the ute, the basic Ford Model T chassis was profoundly utilitarian, finding application in anything from tourers, trucks, coupes, fire-trucks, ambulances and even busses. The Model T roadster is a stripped-back, bare-bones sports car, although ‘sports’ is a bit of a stretch as the performance didn’t quite pin the ears back.

The 4 cylinder, 22 h/p, 2.9 litre, 4-cycle engine used across the Model T range had a maximum speed of 80 kp/h (@1900 rpm). The engine was started by hand-cranking, fired by trembler coil ignition, cooled by thermosiphon and lubricated by ‘splash and gravity.’ Final drive is via a 2-speed, planetary transmission actuated by bands rather than a conventional clutch. At the rear, bevel cut gears run in an enclosed differential at a ratio of 3.64/1. Primitive by modern-day standards, the set-up has proven to be remarkably reliable over the years. Indeed, if we had more time, it would be feasible to drive the old car the 800 kilometres to Kalgoorlie for the Red Dust event but touring is not our Lizzie’s forte. 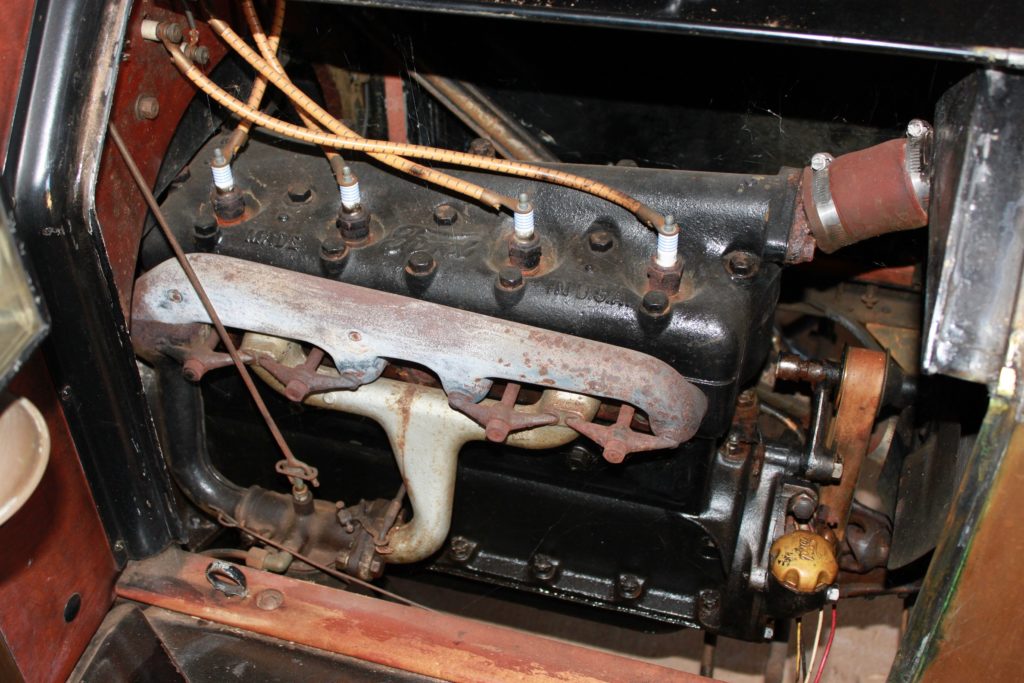 The 4 cylinder, 22 h/p, 2.9 litre, 4-cycle engine is started by hand-cranking, fired by trembler coil ignition, cooled by thermosiphon and lubricated by ‘splash and gravity.’

Our Roadster comfortably seats two adults, three at a squeeze. It only has one door which opens on the passenger’s side to allow occupants to step from the car onto a sidewalk rather than into the street (thus avoiding stepping into the waist product of that other roadster – the horse). It had a removable soft-top, minimal luggage compartment and a top speed of 45 to 50 miles per hour. As a vehicle for the masses, the roadster was, at best, impractical, but that may be where the success of the roadster lies. Roadsters make a statement, they say, “This is a driver’s car, its sole intention is to deliver the thrill of driving for one or two people, with little regard for protection from the elements.” 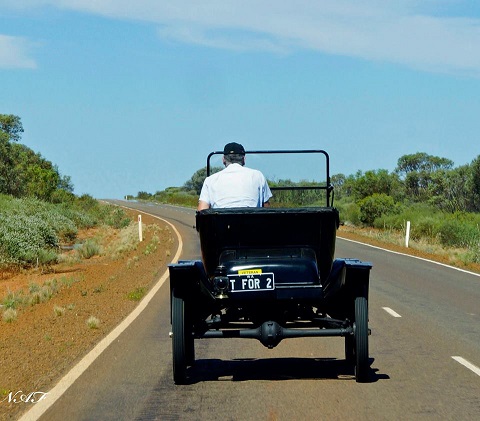 T FOR 2 – not always! Photograph by Donnalea Wilyman

Our Roadster was imported by my father shortly before he fell ill and became unable to drive. Dad’s illness grew worse and, about four months after he licensed the Model T, Dad passed away. He got to drive the car for one weekend before it was parked whilst Dad went in for an operation from which he never properly recovered. The car sat in the shed for about 18 months before my step-mother elected to sell it. Whenever I walked into the shed the T would be sitting there. From what I could tell, it was a sturdy example of an original Model T Ford. In the back of my mind I started to picture myself behind the wheel, so too had my wife. She was already one step ahead of me and decreed the car would not be leaving the family. It wasn’t as if we needed another project, I had the Mustang sucking time and money and here we were trotting off to the bank asking for a decent-sized wedge to purchase a car I never, in my wildest dreams, anticipated owning. Of course that all changed when I began to drive the car and immersed myself in the veteran car culture. 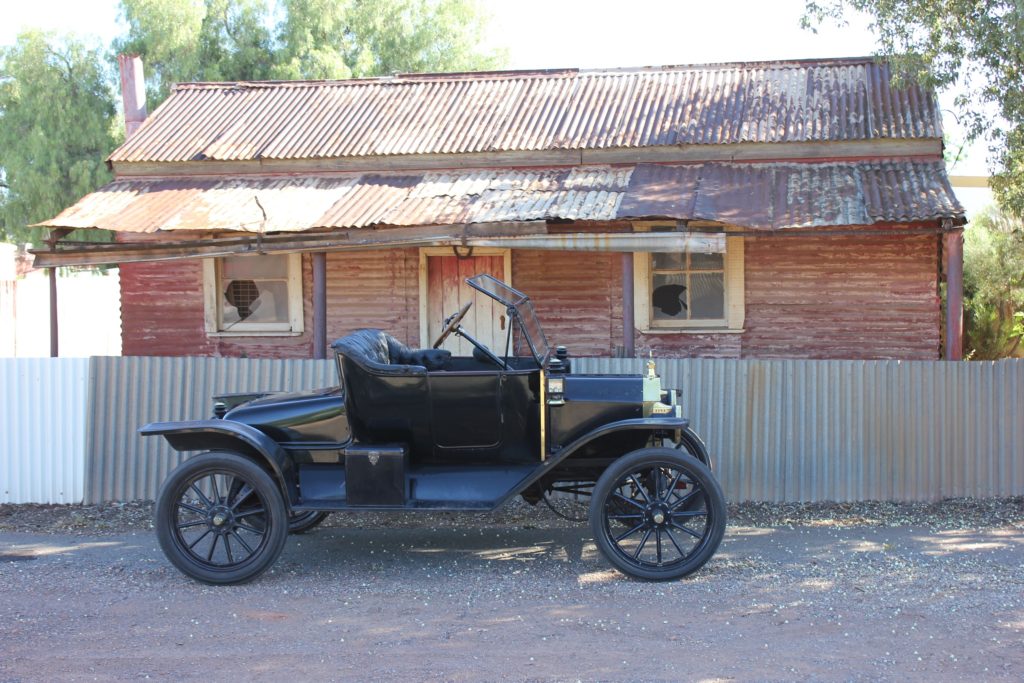 2014 was our Tin Lizzie’s 100 year birthday. Here she is photographed in Kalgoorlie at the National Veteran Car Rally.

Our roadster is a joy to drive. It’s hard to start and complicated to get moving but once we’re chugging along things are really quite pleasant. In fact, once you’re in second, aka top gear, all there is to do is sit there and steer. In the first ever form of cruise-control, acceleration is controlled by a hand throttle lever which ratchets along a quadrant fixed to the steering column. One is required to advance and retard ignition timing by hand and fuel mixture can be adjusted from the driver’s seat but apart from that there is very little to do as the veteran engine chugs along at about 1500 rpm.

Our car has spent the majority of its 105 years in the New England region of the USA. Even by the 1950s the vehicle was considered a vintage car and it was driven to numerous veteran and vintage car rallies across the United States. The car was maintained by well-known Massachusetts Ford mechanic Ed Stein and nurtured by the owner Mr Carl Englund Snr of Ossipee, New Hampshire. Upon Mr Englund’s passing in 1997, ownership was transferred to his son, Carl Englund Jnr, and the car was taken to New York where it remained for another 10 years before being purchased by a collector in Texas. In an email sent to me shortly after we purchased the car, Carl explained that he had to let the car go after it backfired whilst he was trying to start it. The crank swung around, hitting Carls hand and breaking several bones therein.

The roadster was imported into Australia by Dad in 2012. It was licensed soon after Dad took delivery and the car remains largely unchanged from the days when Mr Englund charged through the New England countryside in his driver’s car. Indeed, it remains largely unchanged from the day it rolled off the production line at Highland Park, Detroit, Michigan on 18 March 1914 which, incidentally, was a Wednesday.

Our Tin Lizzie sits out the front of the Broad Arrow Tavern during the 1914 National Veteran Car Rally in Kalgoorlie. Photographed by Donnalea Wilyman.

*The origins of name Tin Lizzie; In 1922 a championship race was held in Pikes Peak, Colorado. Entered as one of the contestants was Noel Bullock and his Model T, named “Old Liz.” Since Old Liz looked the worse for wear, as it was unpainted and lacked a hood, many spectators compared Old Liz to a tin can. By the start of the race, the car had the new nickname of “Tin Lizzie.” But to everyone’s surprise, Tin Lizzie won the race. Having beaten even the most expensive other cars available at the time, Tin Lizzie proved both the durability and speed of the Model T. Tin Lizzie’s surprise win was reported in newspapers across the country, leading to the use of the nickname “Tin Lizzie” for all Model T cars. The car also had a couple of other nicknames—”Leaping Lena” and “flivver”—but it was the Tin Lizzie moniker that stuck (ref https://www.thoughtco.com/nickname-tin-lizzie-3976121).