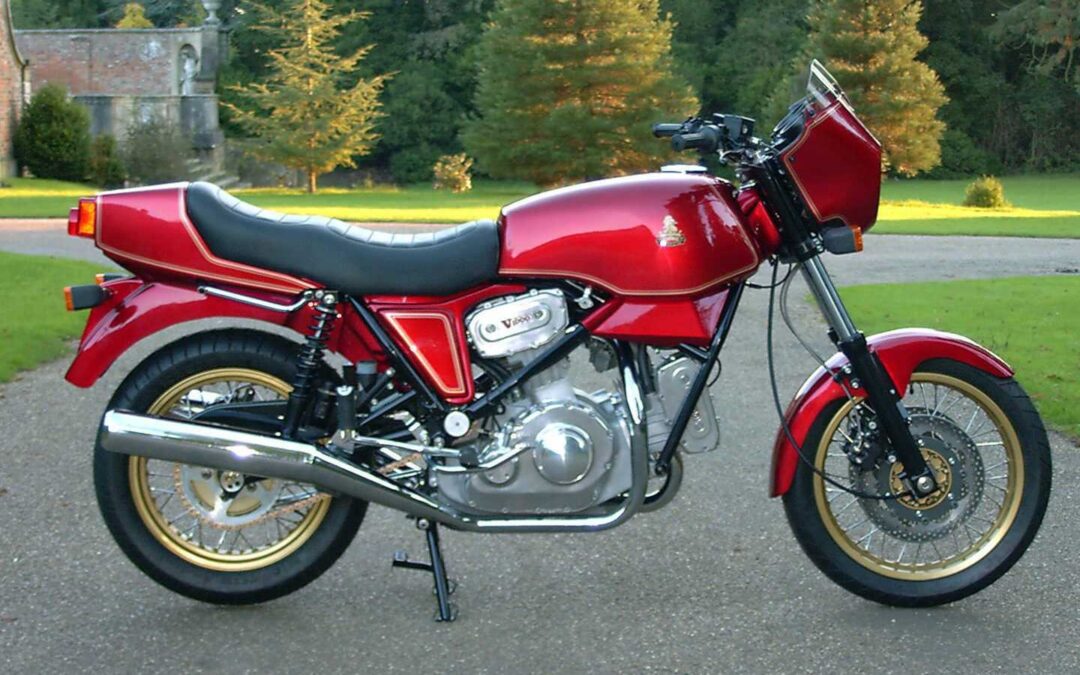 For many, the name Hesketh would be quite alien as a motorcycle brand.  Certainly, it’s hardly synonymous with motorcycling and I suspect a good many people reading this are not even aware there was such a brand.  Hesketh Motorcycles was a company created by Lord Thomas Alexander Fermor-Hesketh, the 3rd Baron Hesketh, and followed his semi-successful Formula One racing team.  At a time when the sun was setting on the motorcycle production in the UK, it was Lord Hesketh’s intention to revitalise the industry.  His progenitor for this was an audacious 1000cc V-twin sports touring cycle reminiscent of Brough Superior and Vincent.

By the late seventies, the last manufacturer of British motorcycles, Norton Villiers Triumph, was in its death throes with aging designs and sketchy manufacturing practices.  The fathers of the industrial revolution were losing the fight against an onslaught of superior machinery out of Japan and Europe.  Throughout the seventies I witnessed British motorcycles winning on the race tracks and the streets.  When it came time to purchase my first big road-bike it was no contest, it had to be a Triumph.  In fact, by that time, if I wanted to ride a new British motorcycle it could only be Triumph or Norton.  Many of my friends were riding Honda 750 and Kawasaki 900 machines but they didn’t appeal to me as much as a 750 Triumph Bonneville.  To ride a new British motorcycle I was limited to 750 and 850 parallel twins, but, unbeknown to me, plans were afoot in Northamptonshire, England, to re-introduce a British V-twin to the world and re-stablish the Brits as the superpower of luxury motorcycles.

As the kernels of Hesketh Motorcycles began to take hold, some journalists were touting to reintroduction of the Vincent twin.  This excited me no end. Regular readers will be aware of my life-long love-affair with the marque and to be able to purchase a new Vincent in 1980 had me ready to sign up.  As it transpired, artist’s impressions of what Hesketh might look like bore little resemblance to Vincent and nothing like the machine that was eventually released.  At the end of the day, all Hesketh had in common with Vincent was exclusivity and expense, however, unlike Vincents, the Hesketh was plagued with problems.

What’s not to love? A chook’s head as your official logo. Lord Hesketh may have fancied himself as a bit of a Rooster.

The Hesketh was released with a stonking 90-degree V-twin engine.  It needed to be substantial as the engine made up the lower part of the frame, in what is commonly referred to as a ‘stressed member.’  At 90 degrees, it looked more like a Ducati than a Vincent or Brough Superior.  The engine was a gleaming lump of alloy (destined to devour many a tube of Autosol), part of a handsome machine but one that would not find its way into my heart.  By the time the Hesketh was released to the world I had gone down the Harley route and I was firmly entrenched in the American cruiser culture (in y defence, I was young and impressionable. I did however keep an eye on Hesketh, more so out of curiosity than anything else.  I was disappointed to learn early examples were beset with problems. We’ll get to the problems – and to how they were fixed – soon.  In the meantime, it is useful to review the V-twin engine.

For a long time, British twins were of the parallel variety, where cylinders are placed side by side and fire evenly at 360 degrees in each 720-degree cycle.  By placing the cylinders 90 degrees apart, different firing patterns are adopted.  A 90-degree v-twin engine will fire at 270 and 450 degrees within the 720-degree cycle.  Where the cylinders are arranged 45-degrees apart, the engine will fire at 315 degrees and 395 degrees in 720 degrees. The odd firing patterns of V-twins suggests they run less smoothly than the evenly-spaced, 360-degree parallel twin, which is not so.  In the parallel twin, both pistons are rising and falling together, creating reciprocal forces that play out as vibrations through the handle-bars, seat and foot pegs.  By contrast, in the 90-degree engine, where the pistons are rising and falling independently of each other, reciprocating forces are lessened. Furthermore, when one piston is firing, the other is travelling at full-speed which tends to balance vibrations rather than create them.  Hesketh was wise to employ the 90-degree layout. 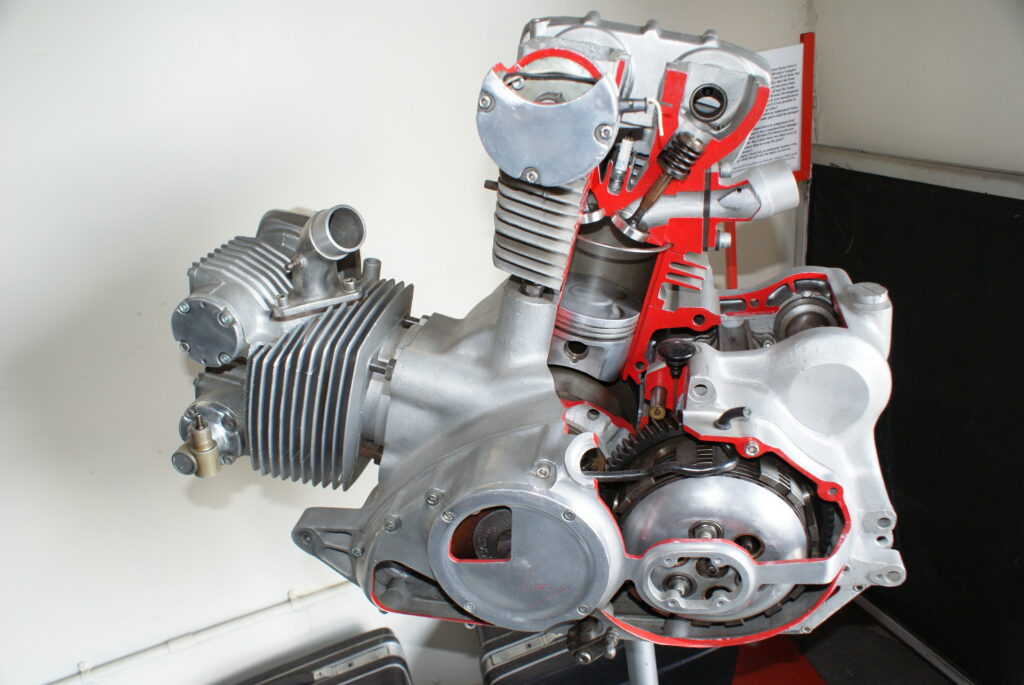 Unlike Vincent and Brough Superior, Hesketh emulated the Italians with a 90 degree layout. This engine was salvaged from a machine that was lost in the 2003 National Motorcycle Museum (UK) fire. The engine later found it’s way to Western Australia were it was on display in the York Motorcycle Museum for many years.

Generation one of Hesketh Motorcycles ran from 1980 to 1982.  Unable to raise sufficient capital for his creation, Lord Hesketh injected his own funds into the venture but the company ultimately failed.  The idiom “creating a small fortune from a large one” played out and by 1982 Hesketh motorcycles fell into receivership with just 139 ‘V1000’ motorcycles being produced. 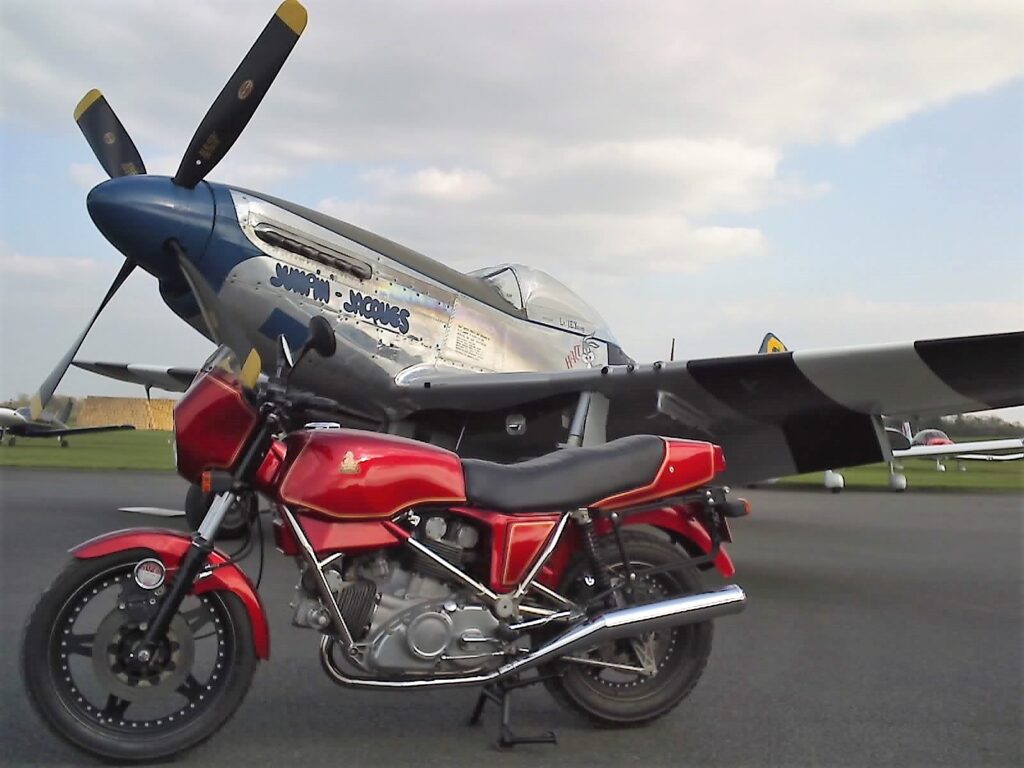 In 1983, with a little help from his friends, Lord Hesketh formed Hesleydon Ltd and had a brief return with another 40 machines, dubbed the Vampire, being produced.  By this time, it was well known the motorcycles were afflicted with a variety of problems, not the least of which included; excessive piston clearance (okay ‘slop’), excessively hot rear cylinder and leaky cam-drive case.  The marque once again closed its doors.  But the story doesn’t end there.

Mick Broom was a development engineer with Hesketh and was intimately acquainted with the engine and the gremlins that lived within it. Furthermore, Mick knew what needed to be done to improve rideability, reliability and longevity of the motorcycles but he was fighting against the winds of a corporate economy that insisted on selling underdeveloped machines, at extraordinary prices, to the public. We’ll let Mick take up the story.

“The obvious question arises, why did a new motorcycle fresh from a factory require all this work after being sold as a up market quality product. The short answer is lack of adequate funding which led to lack of resources and the factory being forced into decisions based on survival with very great pressure from all to deliver bikes. Added to this was the fresh problems due to the different parts and assembly method used at the factory and the ultimate inspector/tester the customer entering the arena and the result was interesting to say the least, for those who lived though it (Broom, 2021).”

As well as a Hesketh engineer, Mick Broom also raced one. This picture comes courtesy of David Sharp and was taken at Silverston in 1987.

After the demise of both Hesketh Motorcycles and Hesleydon Ltd Mick continued to improve the motorcycles with engines being sent to his base in Easton Neston, Northamptonshire.  Broom’s improvements were referred to as EN10, a contraction of Easton Neston 1.0.  They were, by all accounts a huge success.  Writing in the Classic Bike Hub in 2012, Mike Lewis describes the EN10 improved Hesketh as a “Revelation. Gear selection is slick and precise, the meshed cogs remaining silent even at very low revs. A big handful of midrange throttle in top gear brings up 100mph at just 6000rpm.”  Lewis goes on to make a clear observation in that without Mick Broom Hesketh would merely be, “at best, a short-lived historical (motorcycle) footnote.”

Mick’s company, Broom Development Engineering, acquired ownership of the Hesketh names and continued with his EN10 modifications.  Broom had the capacity to produce up to 12 complete motorcycles a year, although, in his words, “I had the capacity to produce 12 a year but some years I never made one, most of my work was in (EN10) updates.”  Mick’s updates included taking delivery of an engine, removed from the host machine and fixing items such as oil regulation, engine breathing, cam chain-case re-engineering, re-machining the bearing mounts within the crankcases.  Obviously this is quite an extensive list.  In correspondence with the author, Mick said, “One thing you learn very quickly in the development game is that when you have solved ‘ the problem ‘ another will take its place. This chain will only end due to an unrelated, in engineering terms, factor. Very simply our job is to make a mechanical assembly perform better by removing the weakest link, this then exposes the next one and off we go again, usually until the money runs out or we achieve our goal.” 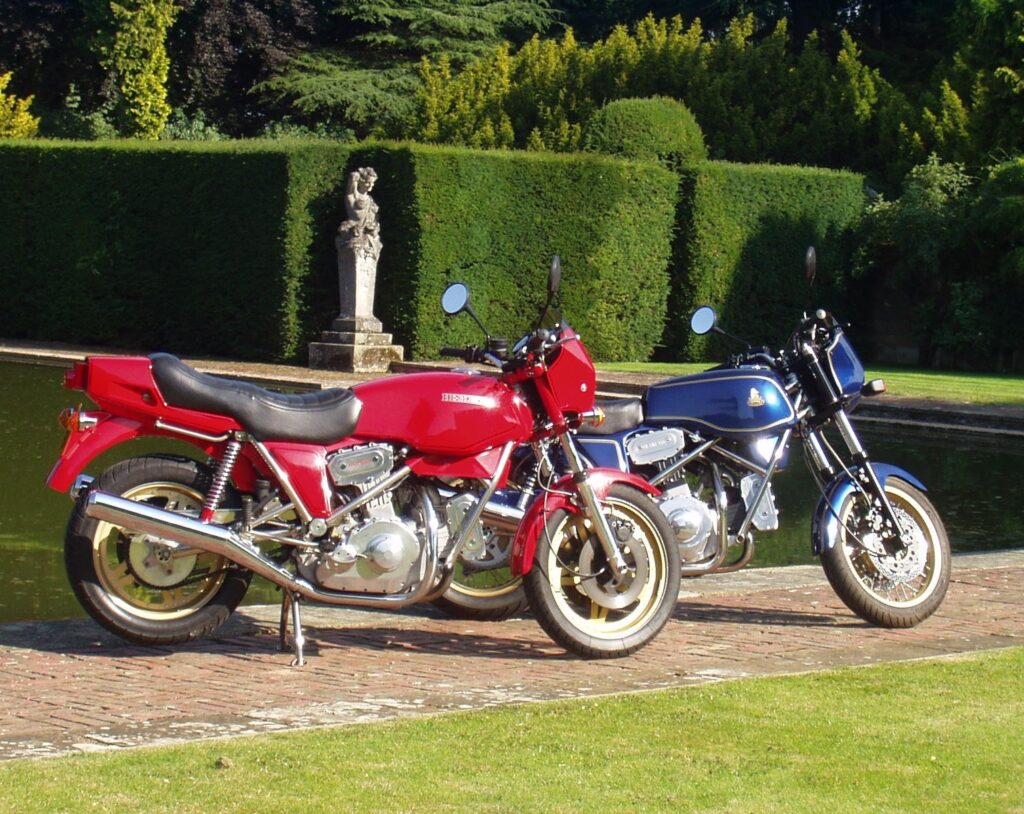 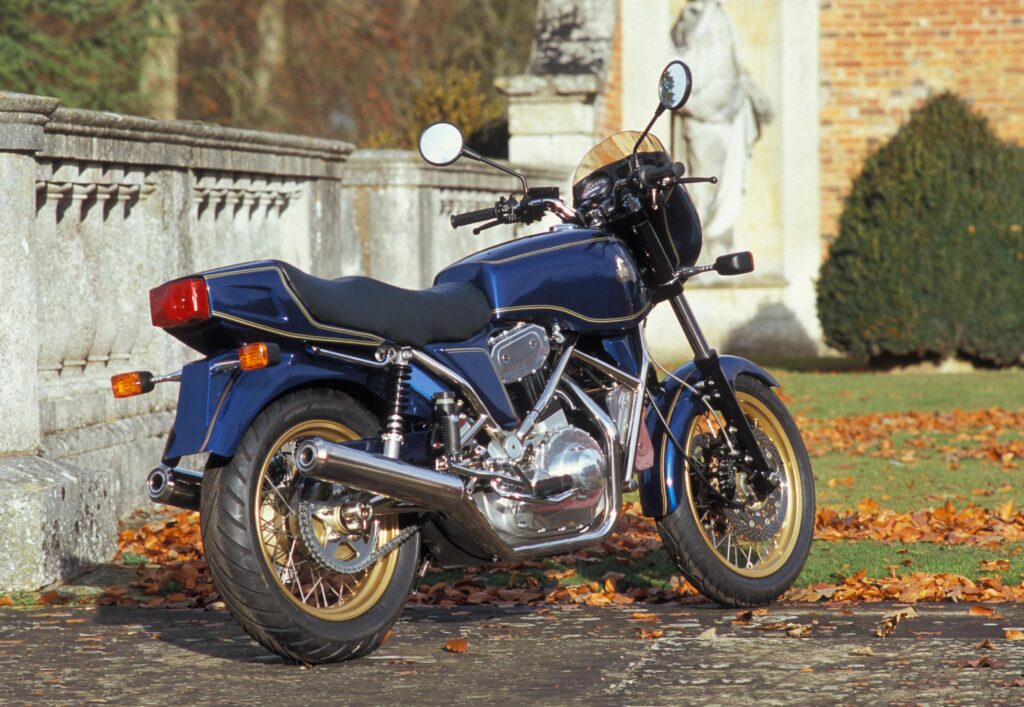 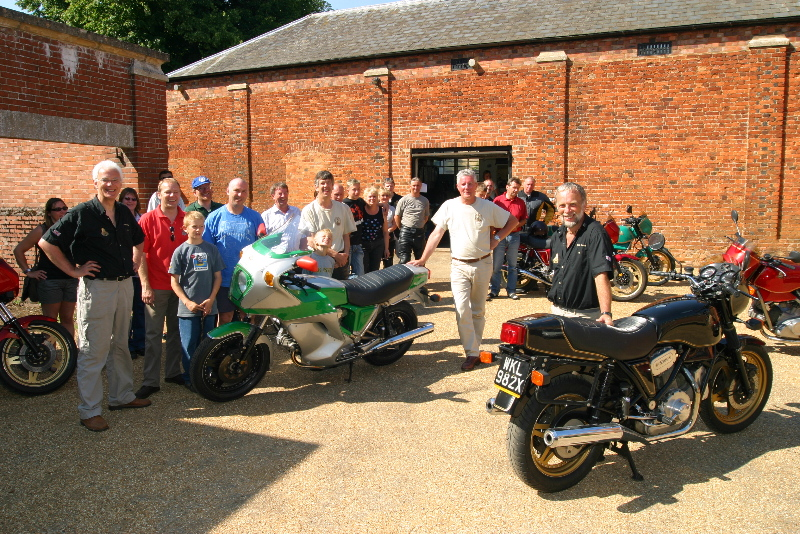 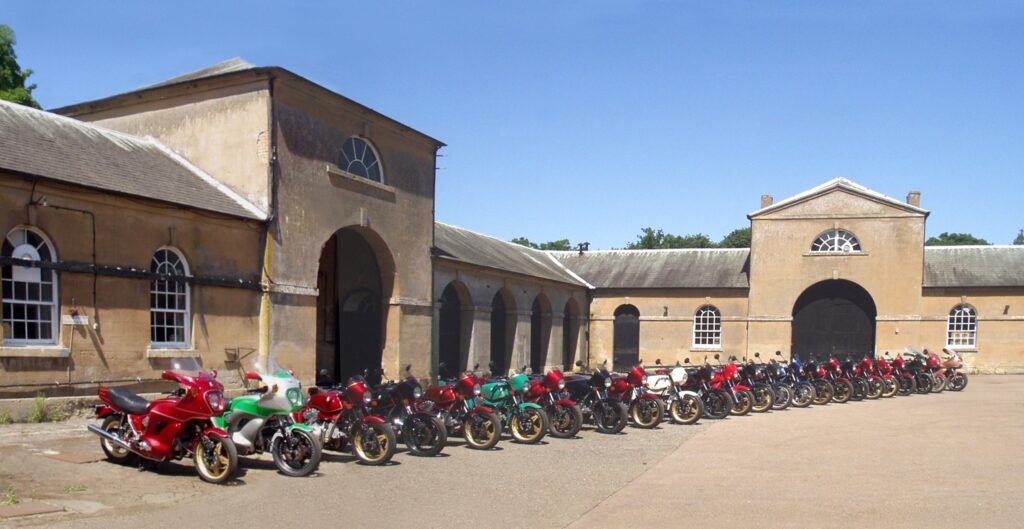 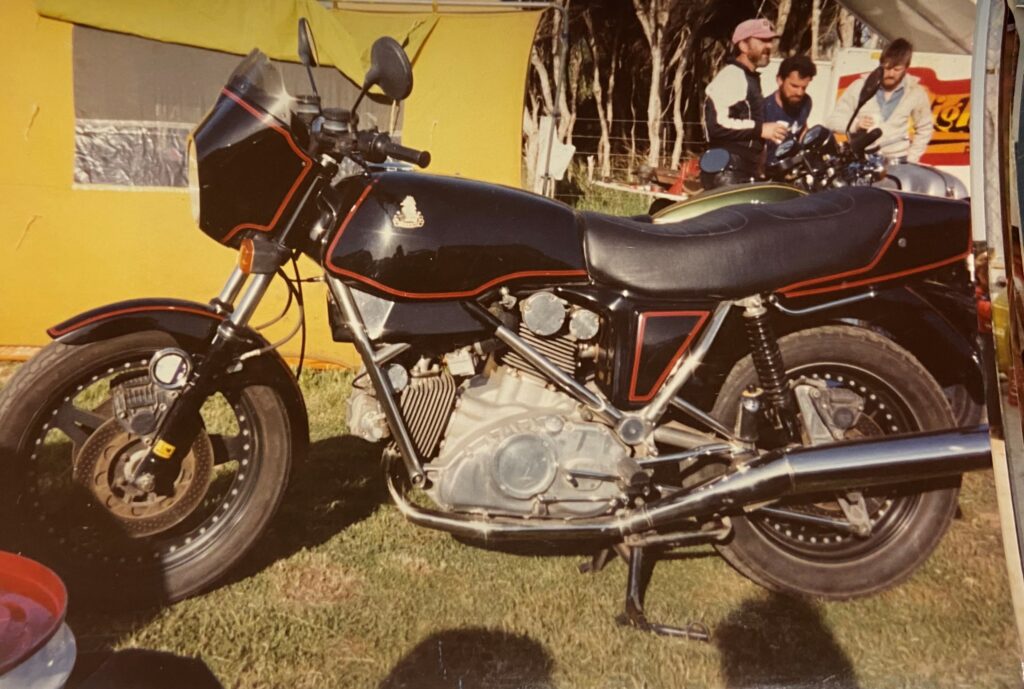 This Hesketh was photographed in Victoria in the eighties by Bob Fursdon. Word has it this machine is still ridden regularly in the Central Coast, NSW.

Special Thanks to Mick Broom and David Sharp for their assistance with this piece.  Also Bob Fursdon who piqued my interest in Hesketh all over again when he showed me the above photograph.

Post script (below), this is the latest incarnation of  Hesketh.  The motorcycle, powered by a 1920cc S&S engine, has been produced by Paul Sleeman in the UK.  Dubbed the ’24,’ Sleeman intends on producing only 24 of these machines as homage to the late James Hunt.  24 was Hunt’s number with the Hesketh Formula 1 Racing Team.  At this time, only a handful of machines have been produced. 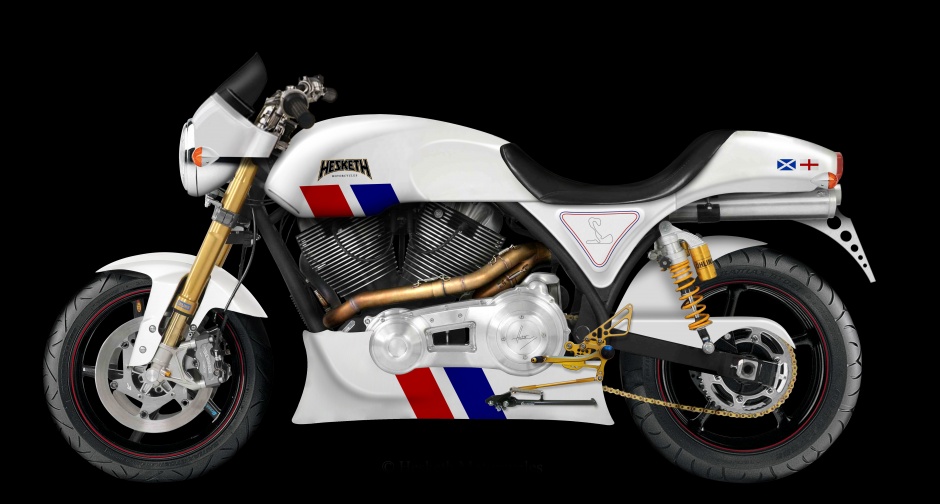