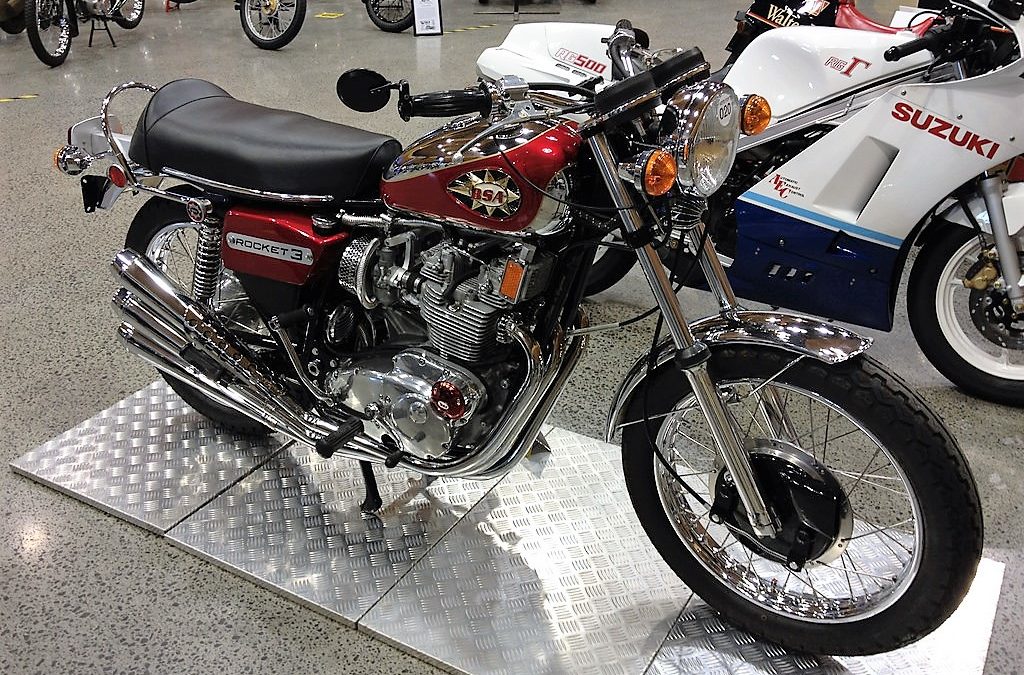 How the Rocket came to wind up in our shed has been discussed in the post Egli-trident-project-part-1 but, to recap, in searching for a donor engine to put into my Egli Trident project, I happened upon a veritable Aladdin’s Cave of classic Triumph and BSA triples.  There were five Tridents and three BSA Rocket 3 motorcycles, in various states or repair, secreted away in the shed.  All the bikes have been brought to Australia from the USA by the owner whilst he was working there over ten years ago.

Whenever Steve saw a classic triple pop up for sale under $USD2000 he bought it.  Frequently he broke that rule, and now he has the afore-mentioned gaggle of bikes here in Australia and another container awaiting shipment in the US.  Readers need not get too excited at this time, that second container has been sitting in Virginia for nigh on 10 years and it’s not about to leave a dock anytime soon.  Steve is a man not to be hurried.

To date, I have secured one of the Rockets and we are now negotiating a Trident.  Both of these bikes are matching numbers machines so I’m reluctant to separate the engines from either of them for my Egli project but I have a plan.  More on that later, for now, we have a Rocket that needs some tender loving care. 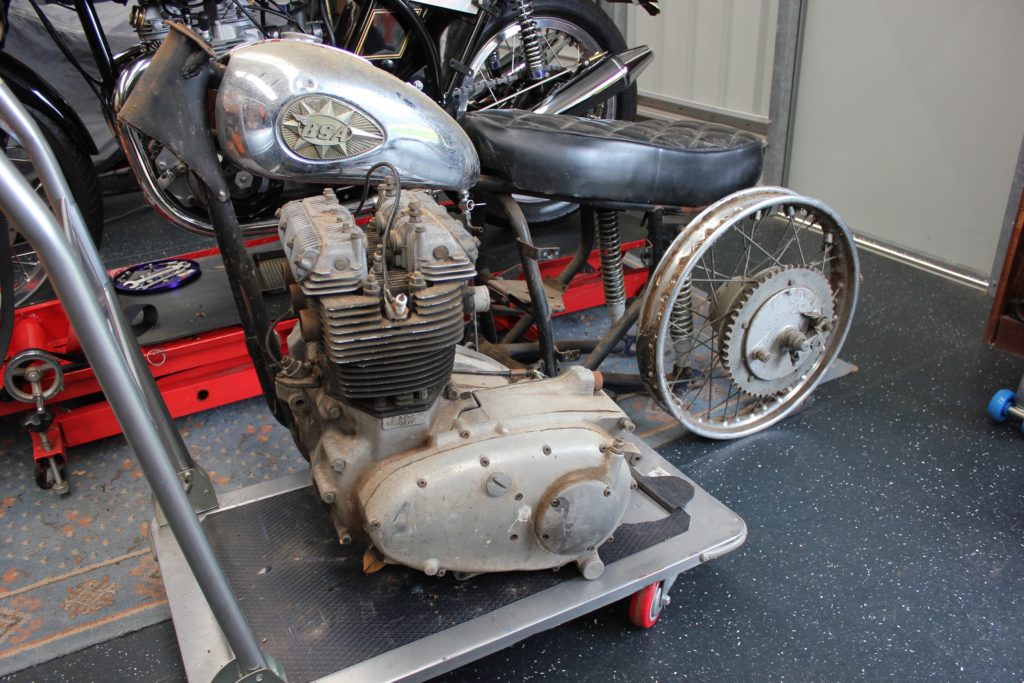 We have a Rocket 3 and it needs some TLC. In motorcycle restoration, this is what’s commonly referred to as a ‘basket case.’ Someone has pulled the machine apart, very likely with good intentions, but they haven’t got any further and the projects are quit – often at a bargain price.

Since arriving in the shed, the Rocket has been completely disassembled, not a huge task as readers will recall it was in pieces, large pieces.  In the past few weeks it has been whittled down to individual nuts and bolts. Those nuts and bolts have been off to the electroplaters and a now sporting a lush coat of silver zinc. 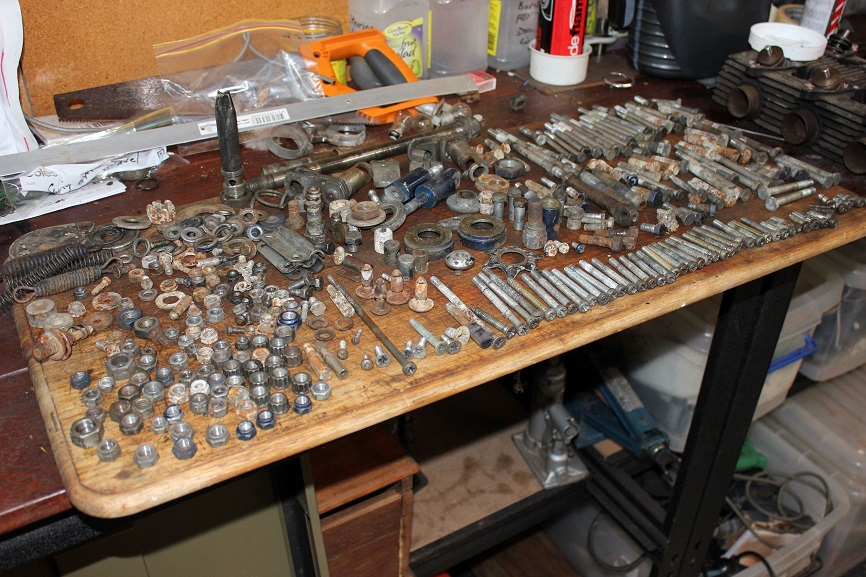 Every nut and bolt was removed from the Rocket and catalogued with numerous digital photographs.

Disassembly revealed a rather healthy-looking engine that belies it’s 48 years.  Certainly, the crank had never been touched, likewise the gearbox.  I was starting to believe the indicated 5190 miles on the speedo might be accurate save for the presence of new pistons and valves in the top end of the engine.  The bike was never started up following the .010” pistons being installed as they still bear a nice, shiny metallic finish.  Why the engine would need new pistons and valve at such low miles is beyond me. 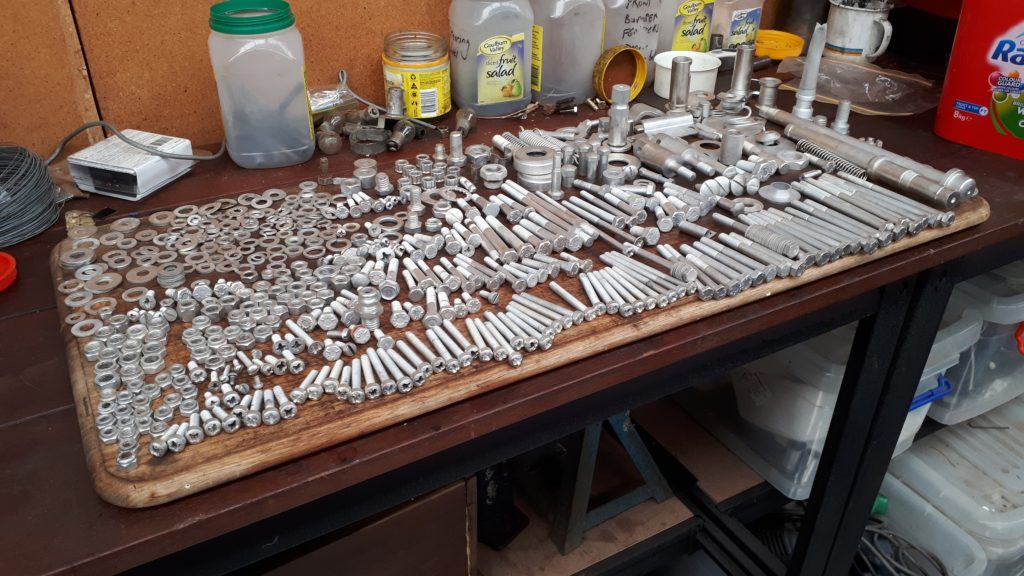 Plating has been carried out and all the fasteners are as good as new in silver zinc coating.

Some time ago, I began watching the price of a set of MAP forged steel conrods that would look great in my engine (if only you could see them).  I watched eBay as our dollar tumbled and the price of the very expensive rods climbed ever so slightly higher, day by day.  To put myself out of misery, in a moment of click-madness, I had spent $AUD990. 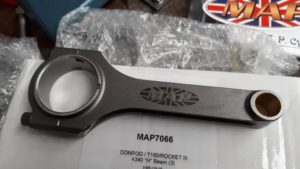 Click-bait – one click and you’re $1000 poorer. But worth it, these are almost too beautiful to put inside the engine.

The rods are a work of art and I would like nothing more than to match them up to some MAP pistons.  Ordinarily, that would present a dilemma as I have three perfectly good pistons that have never been used, but, MAP don’t yet make pistons for Triumph/BSA triple engines – problem solved.  Well, not entirely.  I am reliably informed by MAP they will introduce new pistons for classic triples to the market this year.  In my continual quest for the best components to put in my engine I’m just as likely to wait until I get my hands on three gleaming, new MAP pistons before I reassemble the engine.

At the time of writing, the crank cases have been taken to the city to be cleaned and dressed, ready for assembly.  I already have cleaned the cases with a high pressure cleaner and they came up reasonably well, which once would have been good enough but not anymore, I want this engine to look new and I’ve seen the work Ben does to old cases.  I decided long ago I want a piece of that action so I happily sent my cases off for the treatment.  They are not back yet but I’m confident the cases will be gleaming when I get my hands on them again. 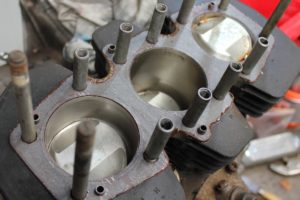 Inn taking the head off the engine I found new pistons and freshly honed bores.

According to my readings, the crank measured up to be within tolerable allowances so I was content to leave it be and just fit new shell bearings.  Ben talked me out of that.  His philosophy is a little bit of cost outlay and work now can avert a major disaster further down the track.  These engines are known for spitting rods out the front of the case so I’m easily convinced to take the extra precautions.  Once fitted, the last thing I want to see is one of my precious MAP rods fighting for its liberation out the front of my beautiful, new cases.

Elsewhere, some of the tin-wear has been treated to a fresh coat of glossy black powder so we are moving forward but there’s some big cost items coming up and the Rocket is competing for limited fiscal resources in the Motor Shed.  Lately the Mustang has been winning that battle. 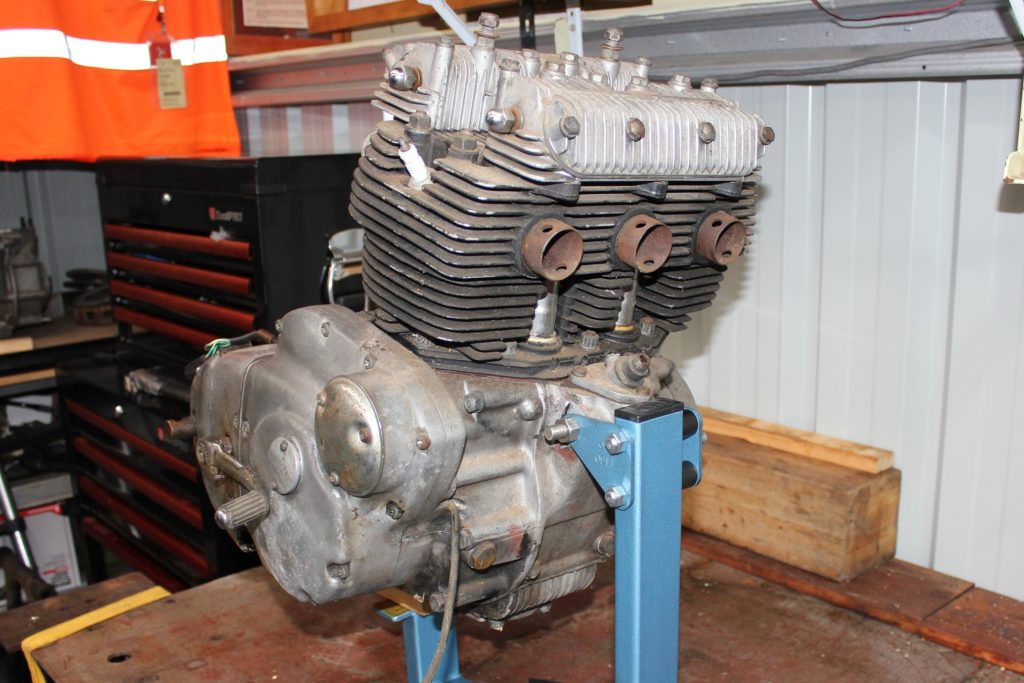 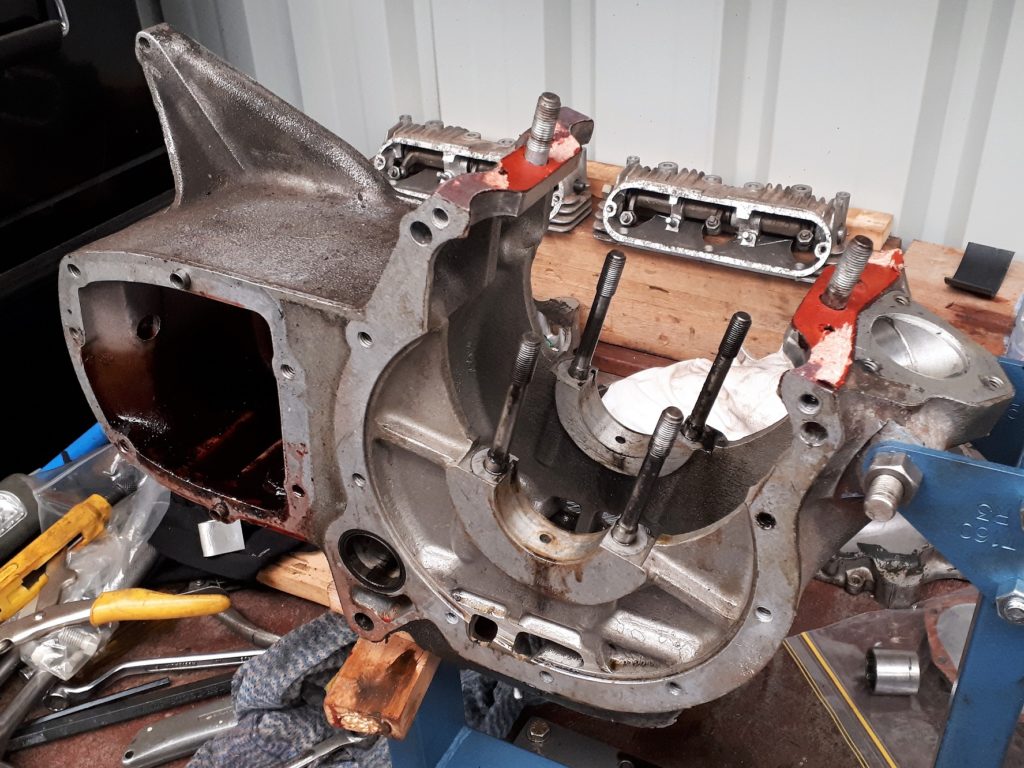 The engine internals looked remarkably good, although I’m not sure about the wisdom in putting a new top-end (pistons and valves) on the engine without delving into what’s below. 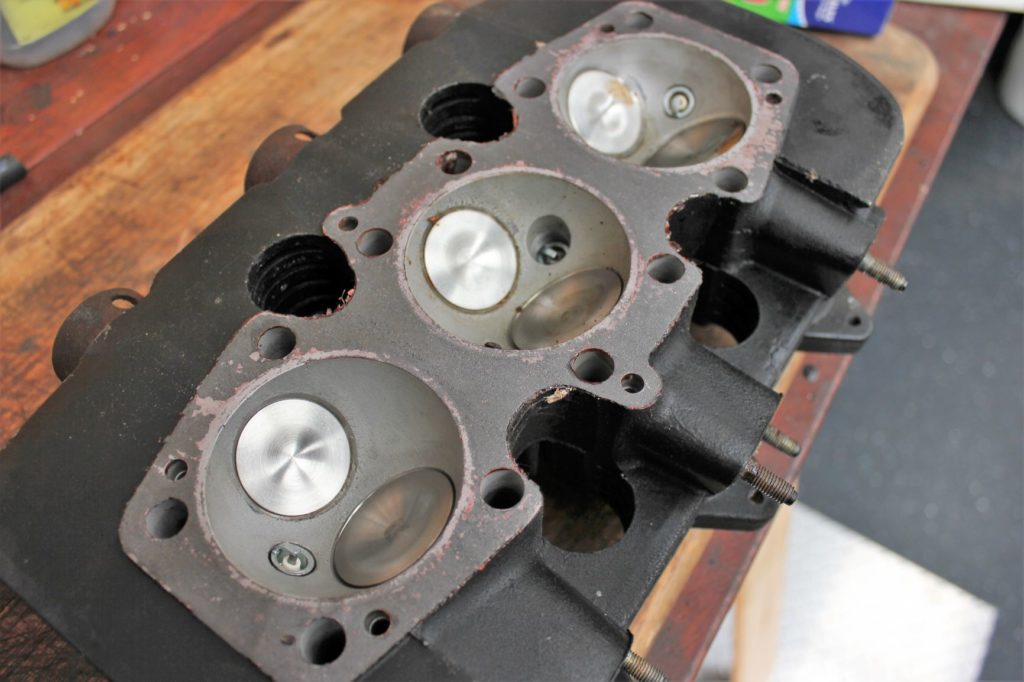 New valves was a nice surprise was waiting for me when I took the head off.