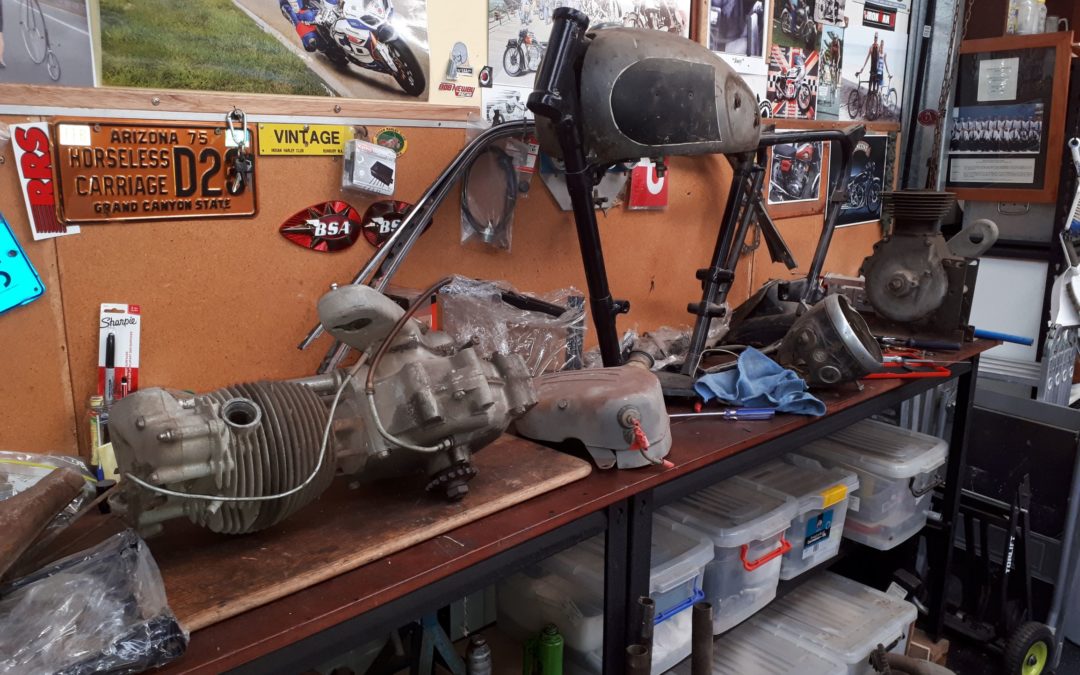 A new project arrived in the shed this week in the form of a lovely little 1956 Norton 350 single. To be honest, the bike’s not so lovely – but she will be again soon.

This machine is a valuable heirloom that belongs to a local family who have been beset by health challenges in recent months.  It was Chris’s intention to restore the motorcycle himself for his son but in recent times he has lost some dexterity which precludes tasks like motorcycle restoration so I am honoured to be charged with the responsibility for bringing this classic British single back to life.

Long before Nortons were tagged with such famous names as ‘Manx’ and ‘Commando,’ the company simply identified their motorcycles with a model designation.  The 350 single is designated Model 50, of M50 for short.  The M50 was introduced in 1933 and remained in production up until WWII when the factory moved away from civilian machines to concentrate on the war effort.  Production resumed in 1956 which means this motorcycle belongs to first run of post-war M50 motorcycles.

Many folk, including me, think of Norton mainly in terms of competition motorcycles but the little M50 is more gentleman’s commuter than a racing bike. It’s smart, business-like and will be quite comfortable with gentle-on-the-back ergonomics. For decades Norton singles dominated motorcycle road racing in the UK and Europe so the M50 has a good pedigree.  Motorcycle racing was James Lansdowne Norton’s passion.   Affectionately known as “Pa” Norton, James was a talented and dedicated engineer who was at the forefront of engine design.  Decades before Taglioni  released his famous desmodromic valve system, Norton experimented with continual valve actuation which he named desmodromique.  Before we go too far down this rabbit hole, it is mentioned here to demonstrate Norton were ahead of the game in the early days of motorcycle engineering, which, we hope, benefited the M50. 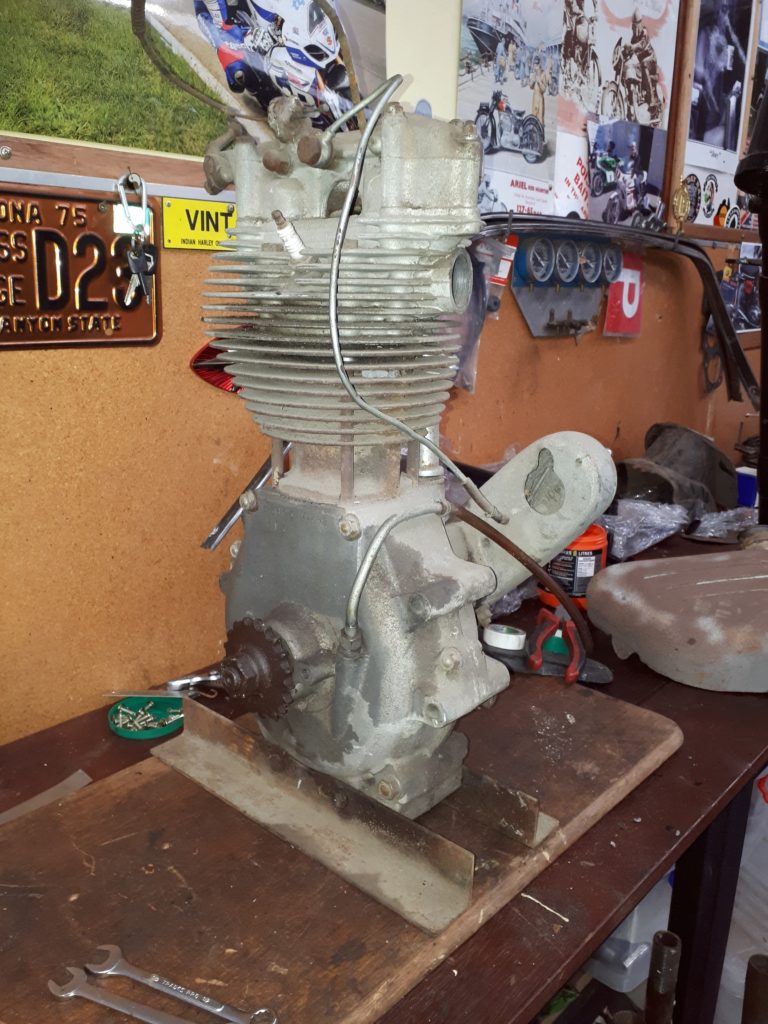 Tall for a 350 cc engine, the 1956 M50 is close to the end of the run for Norton singles which enjoyed many decades of success in racing and on the road.

The bike is finished in traditional Norton silver paintwork with chrome highlights and contrasting black frame. It is the archetypical British single but it’s got “Norton” written on the tank and that alone adds kudos. Manx silver lifts it to another level for this colour has been synonymous with Norton since the time they stamped their seal on the Isle of Man circuit in 1907. Silver, on black, on chrome and polished alloy, this motorcycle is going to look very smart indeed.

Having established the M50 looks sharp, comes with good manners and has a racing heritage, it’s perhaps time to take a step back and look at what we’ve got. Most people would see only a pile of dirty, rusty metal, faded alloy and perished rubber but we see a sound base from which to reconstruct a motorcycle. These days, Metal can be painted, polished or plated to a standard that is equal to, or better than, the original. And that’s just what is going to happen here. 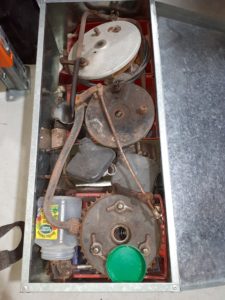 Stepping back to look at what we’ve got, it appears we have everything needed to reconstruct a motorcycle. 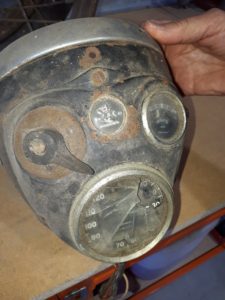 In typical Motor Shed fashion, the motorcycle arrived in several large pieces (and lots of smaller ones). I don’t mind this, the machine will be dismantled to the last nut and bolt but basket cases inevitably have parts missing so it is somewhat of a lucky dip as to what’s there and what’s not. The package includes a spare engine that is partially dismantled and the original engine that matches the frame number. 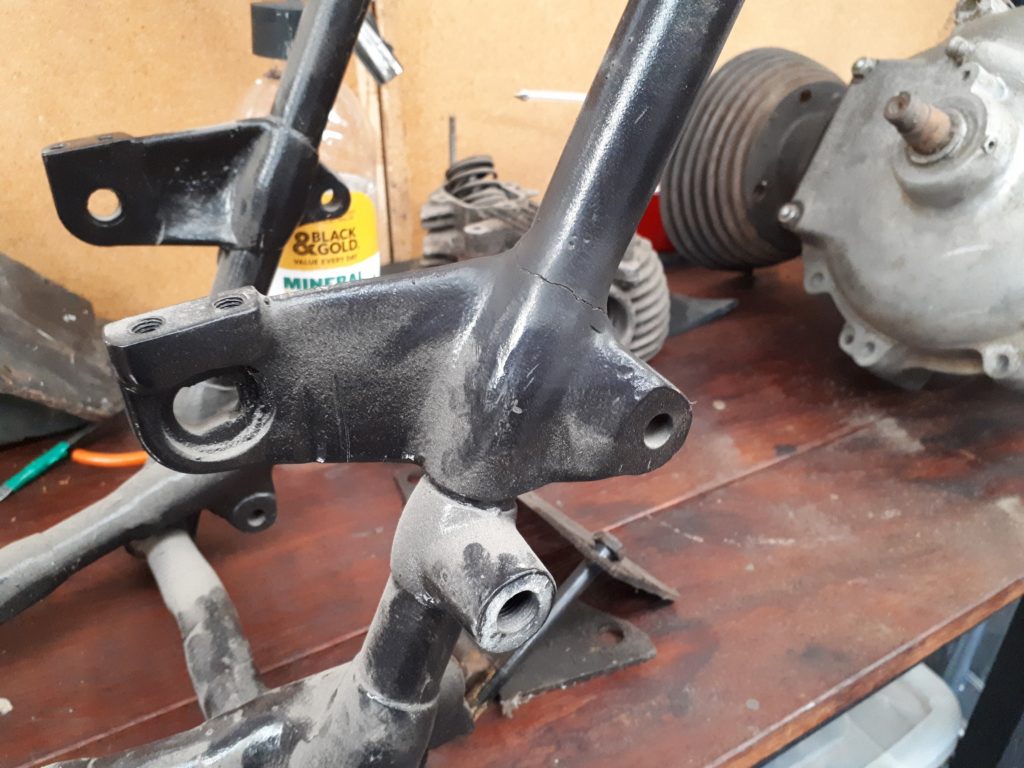 The value of a good inspection. Having removed some paint this crack in the frame was revealed and will need to be repaired. This could have been dangerous once out on the road had it not been discovered.

The engine is a tall, substantial piece of alloy and steel. It’s hard to believe it’s only 350 cc but I have measured the bore and stroke and found it to be accurate. With some good vapour blasting and replating of all the fasteners, the engine is going to be an impressive sight, either on the bench or nestled into the contrasting black frame. 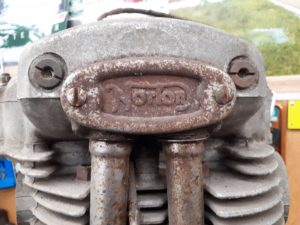 It must have been immensely satisfying to produce a motorcycle with your name on it. James Lansdowne Norton was justifiably proud to put his name to this motor and we will honour his work with fresh chrome plating on this valve cover to make it look as good as new. 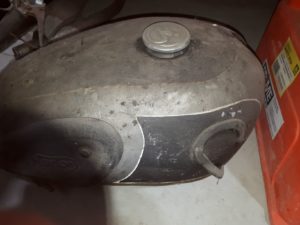 The fuel tank was originally finished in a combination of paint and chrome. It would have been a time-consuming, and therefore expensive, process that helped Norton stand out from the crowd.

Speaking of the frame, it is a sturdy, solid piece of kit but has undergone a few repairs in its sixty-odd years of service. There are at least two welds that aren’t factory and soon there will be one more because I’ve discovered a large crack in one of the tubes. It’s an easy fix but will need someone with better welding skills than me. After that she will go in for a coat of lush black powder – which is sure to set a cat amongst the pigeons with the perennial argument of powder verses paint being ignited. I always err on the side of powder. It looks better, hides imperfections, is longer lasting and provides a better level of protections than paint. Sure, it’s not original but if a motorcycle is going to be ridden then powder is the best choice. If it’s going to be a museum piece then the more traditional coating of paint would be okay.

I’m sure Pa Norton would approve.