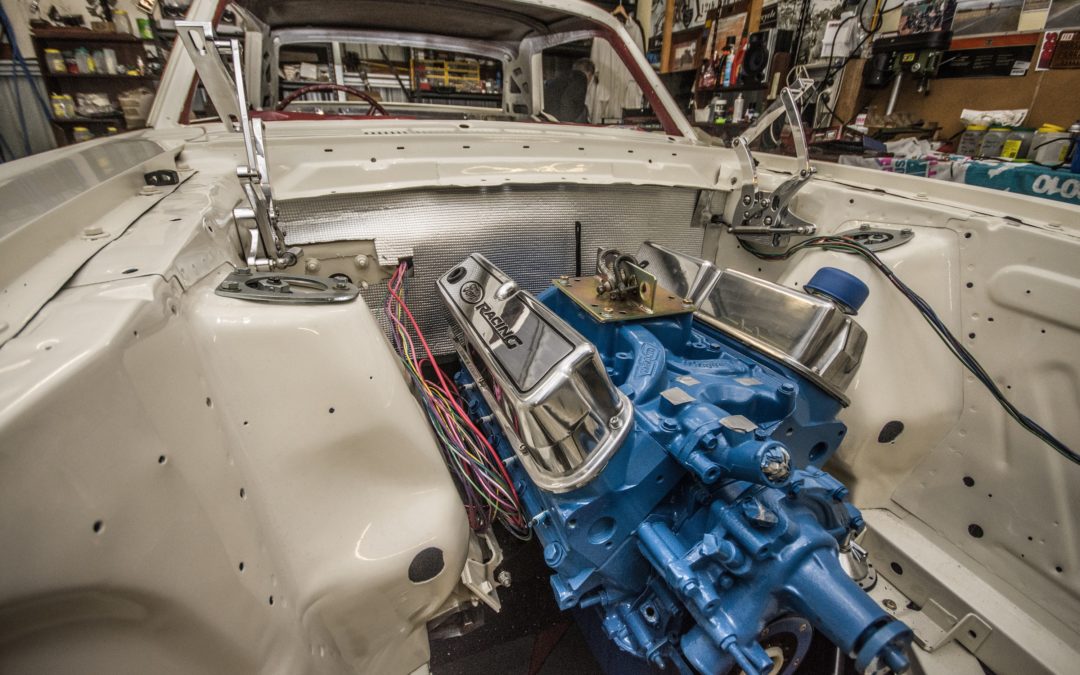 With the Mustang body well on its way to being straight and true, it was time for me to turn my attention to the heart of the beast, a 289 cubic inch Windsor V8. The Windsor story is a fascinating one so grab a cup of tea and we’ll talk a tale of two cities.

In 1904, in what could be the first ever case of badge-engineering, Ford opened a manufacturing plant in Windsor, Canada – across the river from the US Detroit parent company. The idea was to assist the company to gain a foothold into Canada and elsewhere in the British Empire.

Evidently the experiment was successful. The plant later incorporated an engine casting facility and, in 1962, introduced the Windsor V8 engine to an automotive world hungry for power and speed. The modern, new Windsor engine was a marked departure from the previous design and it was an instant hit.

In this ‘everything old is new again’ world, the old Y block V8 is enjoying somewhat of a renaissance amongst hard-core enthusiasts but I’m sure, back in the day, they were quickly shoved aside in favour of the sportier new-comer.

Such was the success of the Windsor V8, production extended long after its replacement when the Cleveland was introduced. In fact, the Windsor was used for another 18 years beyond the short, 13 year span of the Cleveland that ceased production in 1982. The Cleveland engine, as the name suggests, was produced in Cleveland, Ohio. It was intended to be a more robust and versatile engine than its predecessor. The Cleveland lived up to expectations and proved very successful in racing, particularly in Australia where it was a game-changer in the Falcon GT. The Falcon GT was a dream-car to many a teenager growing up in Australia, including me. The advent of the Cleveland, for us kids, signalled the end of the Windsor. Everyone knew, if you wanted to be in the race a Cleveland was the only way to go, notwithstanding both engines came in 351 cubic inch displacement. Like the Y block before them, Windsors were shunted aside and ended up in cars driven by the slightly more wealthy members of my cohort.

But then a strange thing happened, the Windsor refused to leave the stage.

Having pinned their future muscle-car ambitions on the Cleveland, Ford planned to phase out the Windsor in the late seventies, but the perennial heart-beat from across the river had other ideas and Detroit were forced to keep sending it out into the world. It stayed on in 302 cubic inch format up until 1982 when it was re-badged the 5.0 (litre) and remained in production up until 2000 when the last of the fuel injected, roller cam engines were put out to pasture. It was one of those, the last incarnation of the Ford Windsor V8, that I had my eye on for the Mustang. 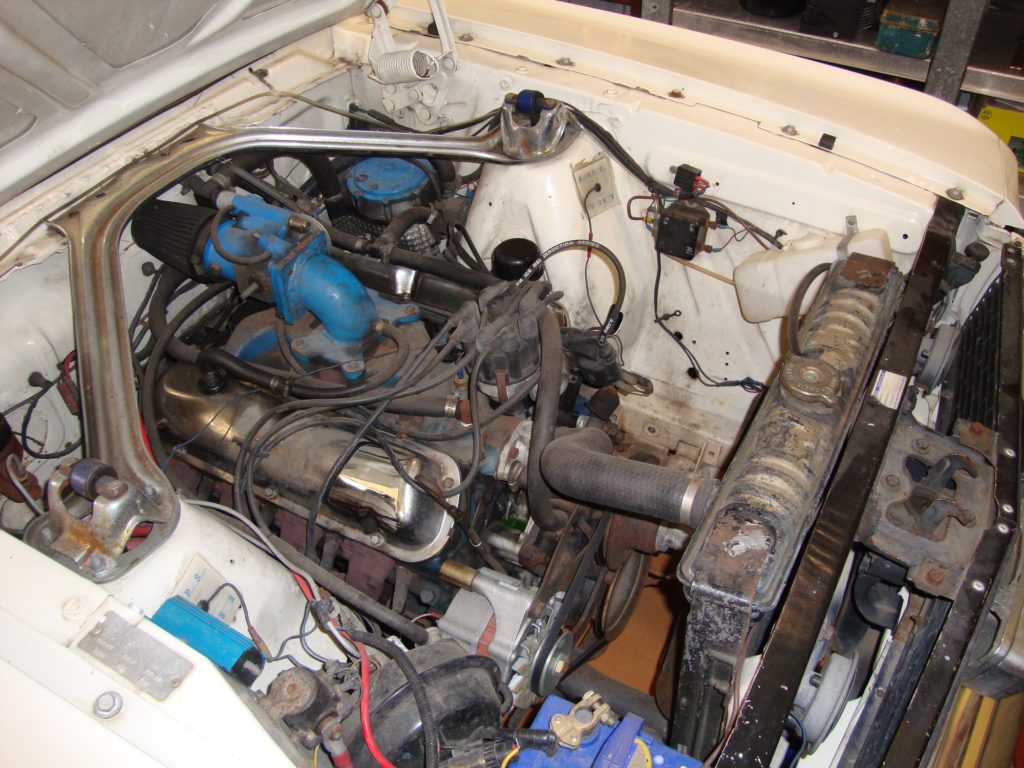 The tired, duty, oil-leaky 289 Windsor V8 had to go. Note the dedicated gas set-up the previous owner had installed (no doubt at great expense).

My car was from the sixties and it was produced with a Windsor V8 which meant this was the only option. A bonus here is the direct connection to the seventies when those afore-mentioned, financially capable friends of mine were running around garnering my envy in their Windsor-powered cars. Four decades later, I’m set to revisit those days, the days before the fuel injected, refined, perfectly timed and smooth V8s we’ve become accustom to. 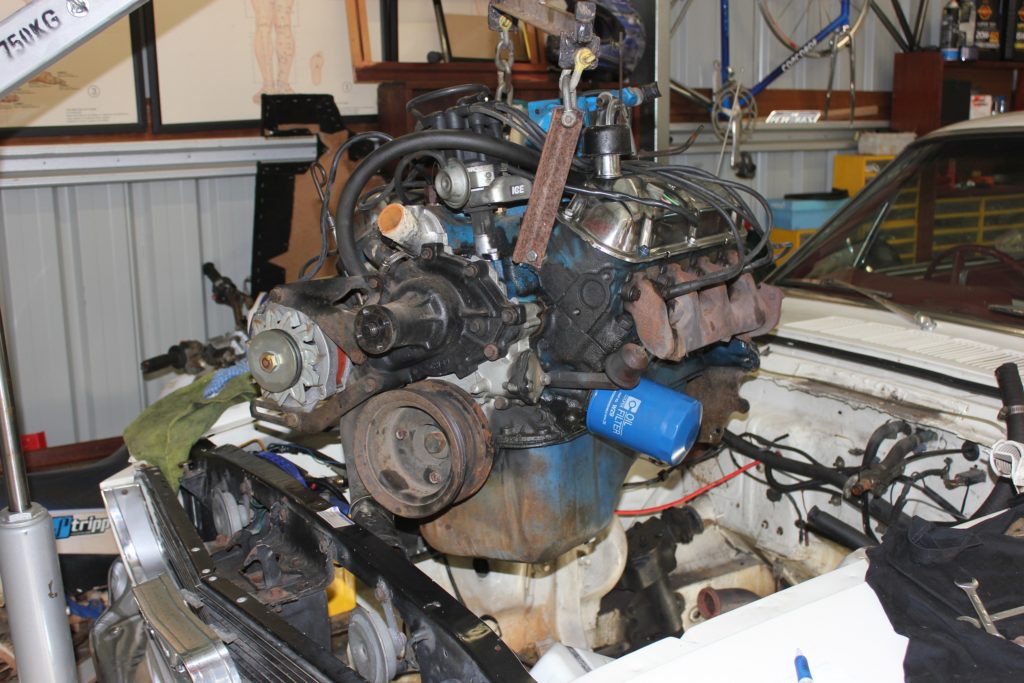 Out with the old.

To be fair, there’s no shortage of roller-cam V8 engines looking for cars to inhabit with a lot of people being put off by all the fuel injection hardware that sits atop the engine, they are a natural turn-off. Fuel injecting a Windsor is the automotive equivalent breast augmentation, it looks great but it comes with high maintenance and takes skills far beyond my fumbling fingers to master so losing the fuel injection unit was a must. When I lift the bonnet on my 66 Mustang I want to see a bright blue Ford Windsor V8 at home in there with a 4-barrel Holley breathing through a classic Ford air-filter.

I had read on the internet it was quite a simple task to throw out the fuel injection and return the engine to the less socially acceptable form of fuel delivery from the last century – the carburettor. To achieve this I would mainly need two things, an engine and a carburettor. As it turned out, I would need many things but these two items seemed like a good start (the 289 engine I removed from the car had been gas-powered so there was no carburettor with that).

The 5.0 roller cam Windsor I settled on was a used American imported item falsely described as ‘refurbished.’ I would later learn refurbished is semantics for paint and gaskets, which probably explains why the engine was so cheap, however, there was a bonus: I could take my pick from a nearby pile of carbies. In a nod to the environment, I selected a 480 cfm unit. Sure, it’s got four barrels but it’s in the smaller range of the 4-barrel Holley family and at the end of the day, my car is intended to be a cruiser anyway. 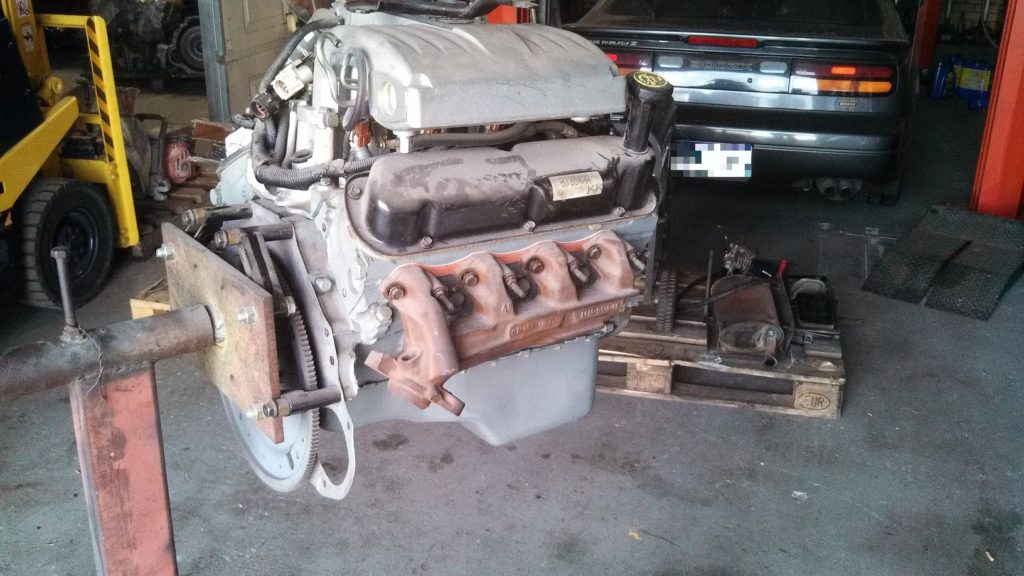 The last hurrah for the Windsor V8 engine. This fuel injected engine was reportedly ‘refurbished.’ In truth, it had a few gaskets replaced. Note all the fuel injection hardware at the top of the engine that had to be removed.

Feeling pretty chuffed with myself, I took the engine and went off to get a Windsor expert to run his eye over it and help return the unit to carburettor fed. Having been with us since 1962, these things are quite rudimentary but, as it turns out, there was a fair bit more required to return a carburettor to the Windsor than I had anticipated. The list included a new inlet manifold, camshaft, distributor, coil, water pump and fuel pump. I wanted someone I could trust to turn me out a good engine at a reasonable price and, to that end, I chose Paul Poller of SpanaWorx Mechanical Services. Paul’s easy-going nature and sensible approach to engine builds was ideally suiting to adapting the 302 for service in my ’66 Mustang. 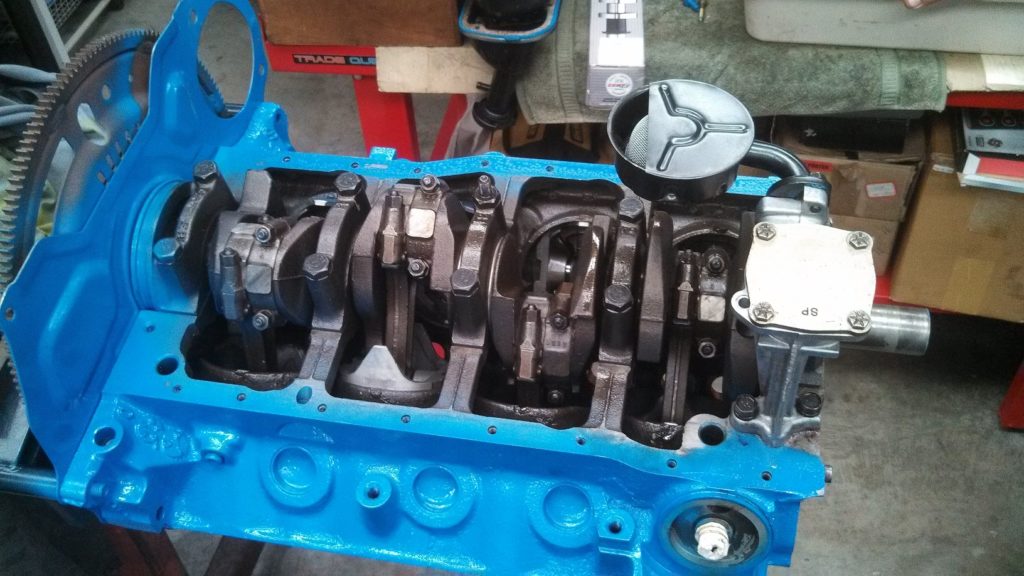 My bargain engine basically needed a full rebuild. Here, Paul is treating it to a new oil pump – adding to my peace of mind.

There was a prosperous time about 10 years ago when the Australian dollar was on parity with the US greenback and we enjoyed the bountiful US performance market with relatively little trauma to the hip-pocket. Importing used engines from the US was a thing and some of the more creative exporters turned, shall we say Dickensian, in using elaborate terms to sell scrap metal. I accept I jumped into the unknown but I wasn’t expecting someone to have drained the pool. 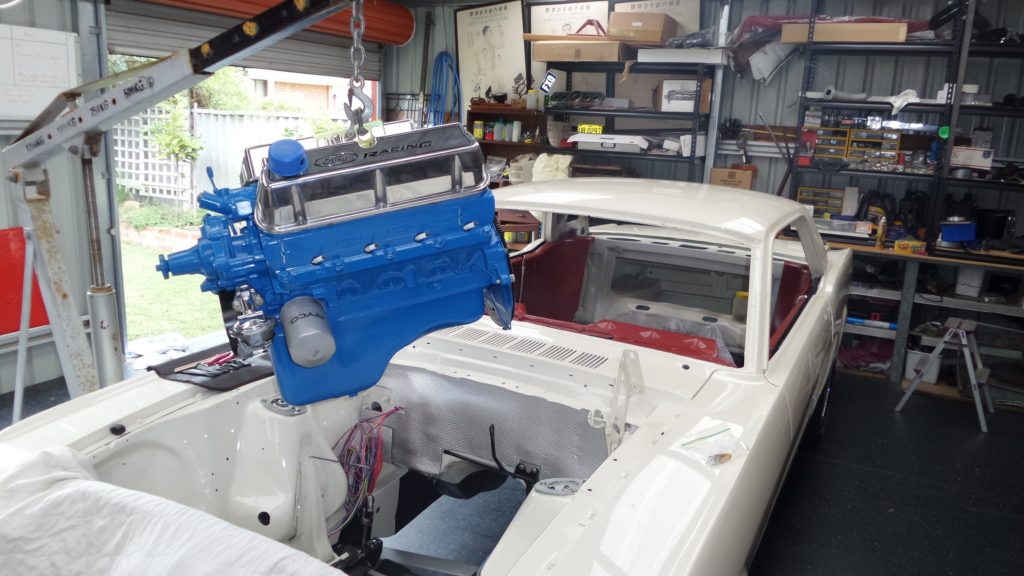 In she goes. Well almost. The sump got hung up on the cross member and the engine would not seat properly. A simple fix was to swap it with the sump from the 289.

By the time I took delivery of my sparkling blue Windsor V8 it had new rings, bearings, camshaft, alloy heads and host of external parts to add beauty and practicality. The old 289 was no slouch but I’m expecting my new, improved heads and lumpy camshaft will add a few horsepower to the already spritely 302. 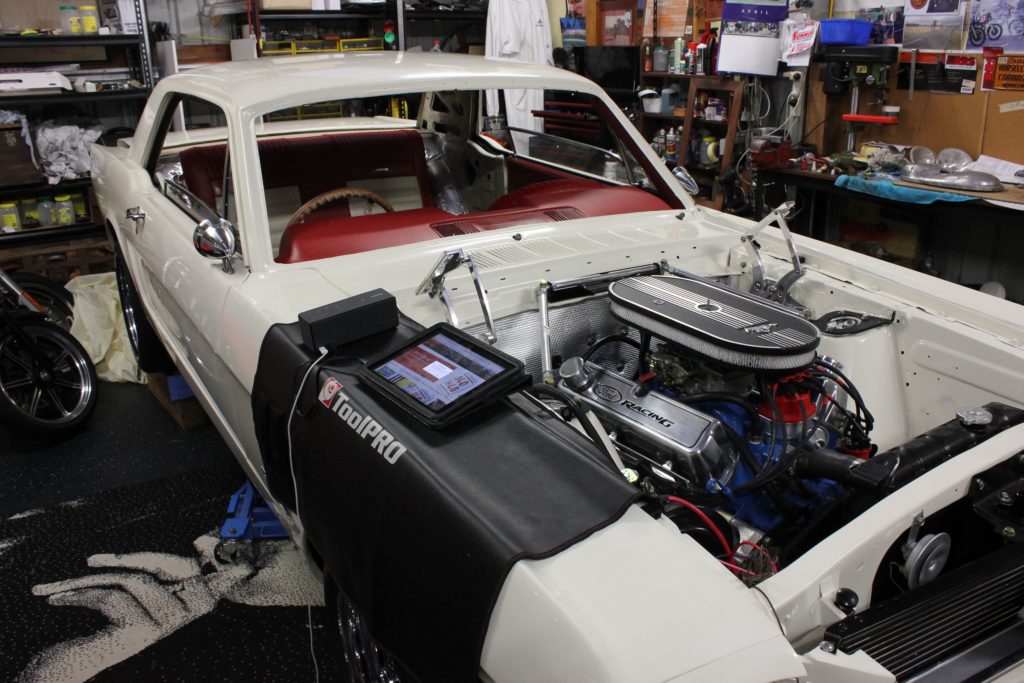 Getting close now and relying on Google for some last minute tune-up tips.

My carby was sent off to Xtreme Fuel Systems in NSW where it was transformed to better than new. This is the third carby Xtreme have reconditioned for me and I highly recommend them. I took the carb out of the box and simply bolted it onto the engine. The carb is yet to be dialled in, but the engine burst into life after a few short bursts on the starter motor with a deep rumble that has been absent from my life for too long. It is immensely satisfying to hear that car running again. 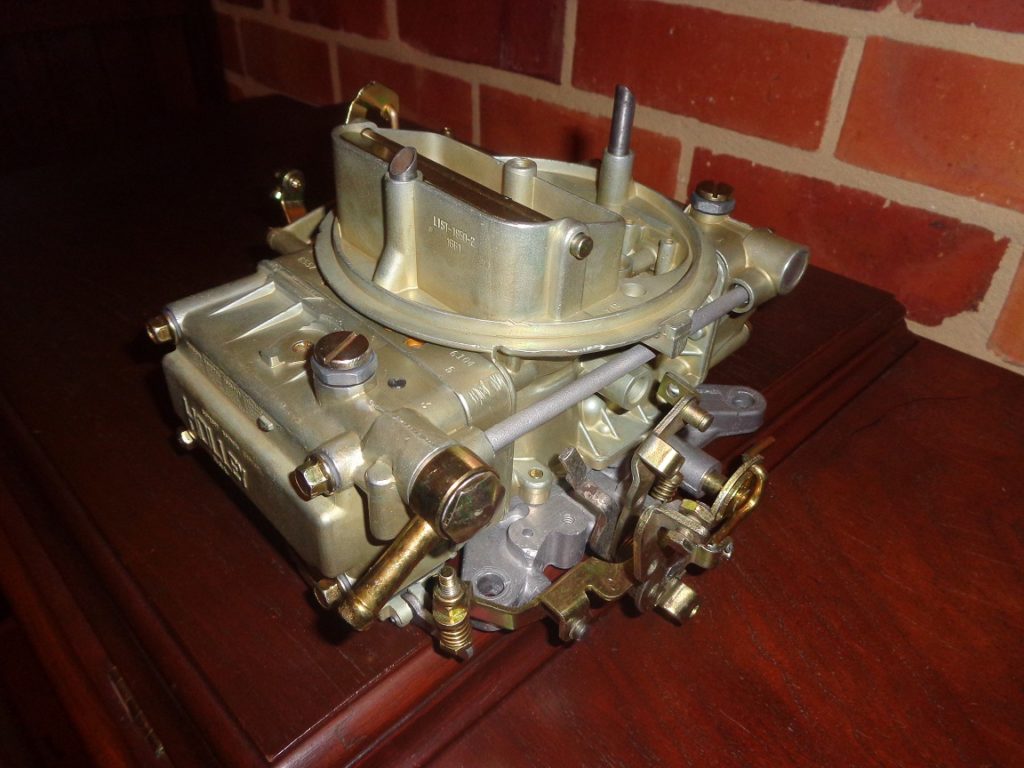 The rebuilt Holley carb is a thing of beauty. Xtreme Carburettor Rebuilding in Cambelltown, NSW are highly recommended. 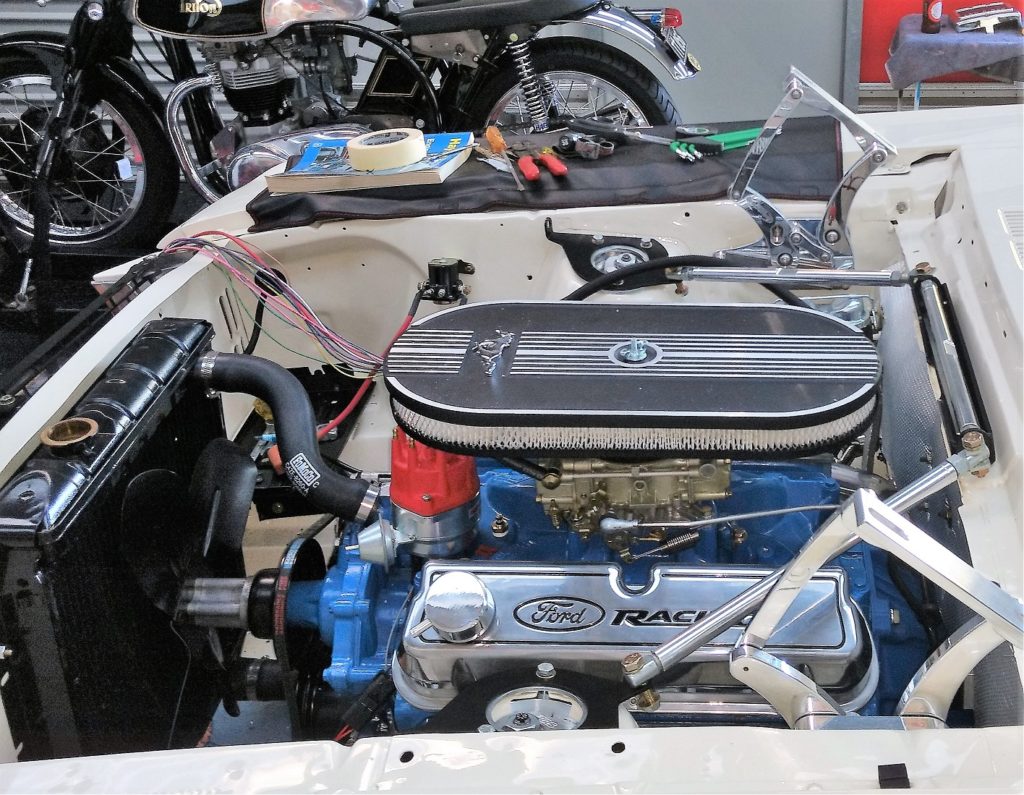 When I lift the bonnet on my 66 Ford Mustang I want to see a clean and tidy Windsor V8 engine breathing through a classic Ford air-cleaner – in this case a Shelby replica.