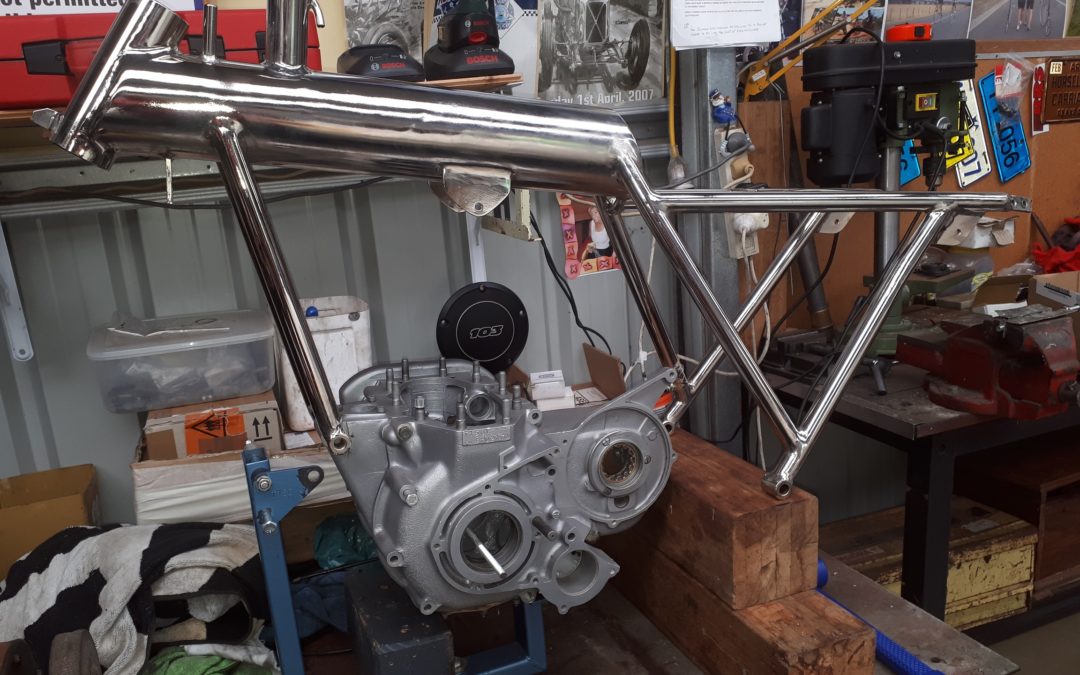 I was recently having a chat on messenger with Mr Fritz Egli himself about Nortons, specifically the modern incarnation of the 961 Commando, such as that which lives in my shed.   Suffice to say Fritz is not a fan of the new Norton however I enjoyed tapping into his knowledge base, even if he did insist on telling me how bad he thought the Norton was. Anyway, after I figured we had developed a comfortable rapport, I clumsily steered the conversation towards my “Egli” build. Without another word Fritz left the conversation.

Mr Egli is quoted in Philippe Guyony’s 2016 publication Vincent Motorcycles, The Untold Story since 1946, on the popularity of unauthorized copies of his famous motorcycle frame design, “The were more than six workshops manufacturing and selling unauthorized copies of my frames all over Europe as the genuine ‘Egli-Vincent.’  of course, at first I was upset, but soon I regarded it as a compliment to my design and then I moved on (2016, p.6).”

I’m prompted to rename my project, I’ve been thinking of the Triple T (Taylor, Talbot, Triumph). Comments and suggestions for a name are welcome at the bottom of the page.

In the interests of revision, and for those that are new to this project, Colin Taylor, who has built over 90 Egli-style frames, was tasked with building a frame for me to plonk a T150 Triumph 750 triple engine into. It is my intention to build a mid-seventies, part hot-rod, part superbike, special. An almost unique machine that will go as good as it looks. I say ‘almost unique’ because, as best as I can tell, there is only a handful other Triumph triples living in Egli-style frames that I know of. Indeed, Egli himself is rumoured to have built two frames for Slater Brothers in England to fit triple engines to and authorized the construction of another 12 by specialist frame builders in the UK at Slater’s direction. This was something I was about to discuss with Fritz when he terminated our conversation.

Tapping into online resources I’ve identified at least three Egli-style T150 motorcycles in France, one in Norway and the below pictured machine owned, crashed and burned by Marc Maslin in the UK.  Marc’s motorcycle was one of the original Egli authorized copies and therefore comes with the blessing of Fritz himself. Sadly Marc’s bike underwent a Viking funeral (as Marc puts it) and is now resting peacefully in Valhalla. 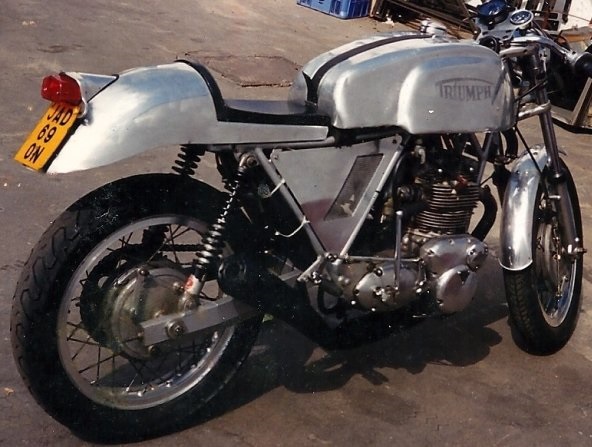 At the time of contracting Colin for the build I didn’t actually have a T150 engine but they are certainly easier to come across than the Vincent engine synonymous with the original design. I expected it would be a short time before I located a suitable engine, but, instead, I’ve been locating whole bikes, albeit barn-finds and basket cases. I now have a ‘71 BSA Rocket 3 and a ’74 Triumph T150, neither of which I’m willing to sacrifice to the build we are discussing here. Incidently, the causal relationship between the BSA and Triumph triple engine is a fascinating topic that can be read here.

I also have an assortment of T150 engine cases, crankshafts, heads and other engine parts that I have brokered and bartered for over the past couple of years. To the casual observer it might look like I have enough bits to build three engines but most of it is quite poor quality and certainly won’t withstand the rigors of what I’m intending on building, however it does serve a purpose which will become apparent below. 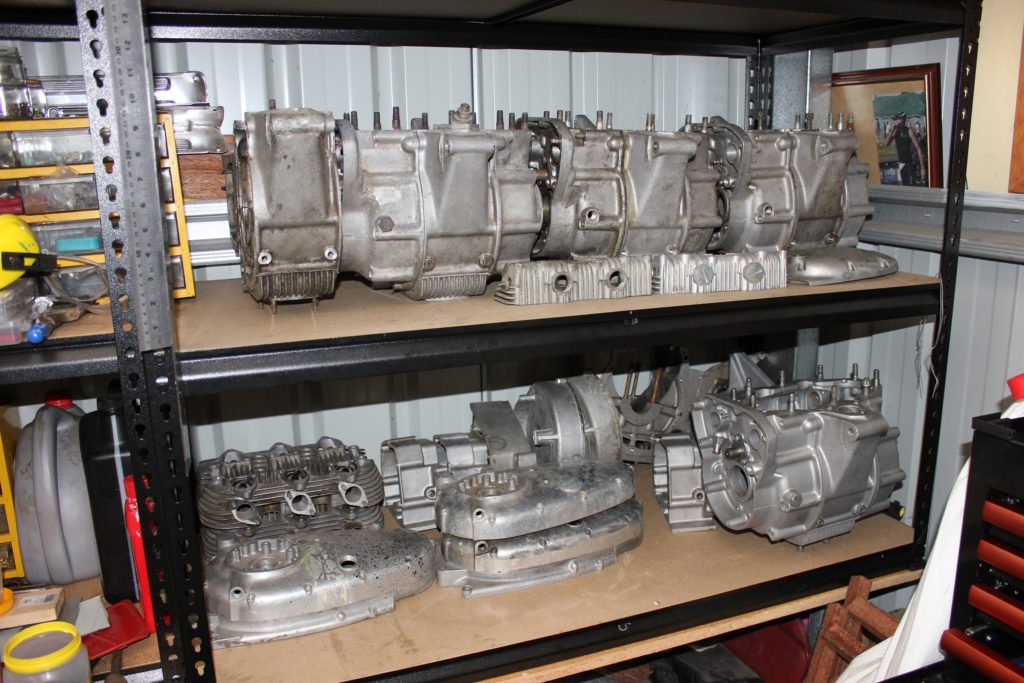 Over the past few months I’ve been able to amass a few Triumph T150 engine cases and parts.

In August this year my wife and I returned to the UK and our favourite place in the world – the Isle of Man. In travelling to the Isle, we flew into Manchester and boarded a train for the one-hour ride to Liverpool. Sitting at the top of platform 5 in Liverpool, Lime Street Station, was Colin Taylor with my brand-new, nickel-plated, motorcycle frame. After many emails and me sending a not inconsiderable sum of money to Colin in the preceding months, we finally met face to face. I’ve read a lot about Colin and his creations and have seen his photograph numerous times in the motorcycle press so it was quite special meeting the man and being regaled by his jokes and general banter.

The author finally meets the specialist frame builder Colin Taylor – and takes delivery of the newly finished frame for our Triple T special.

I would love to say I was giving Colin my undivided attention but, in truth, I had one eye fixed upon my frame sitting on the floor of a very busy English Liverpool pub, dividing my time between that and chatting to Colin about all things motorcycling. We broke bread and drank Guinness and had a pretty good afternoon before Catherine and I made our way down to the ferry terminal and Colin headed off back to Nottingham (although he is an Englishman, Colin lives and builds his famous frames in Italy. I’ll leave Colin to add his contact details to the bottom of the page for anyone wanting to build a special).

I slung the frame over my shoulder and we set off on foot for the two-kilometre walk to the docks to board our ferry to the Isle. Along the way, a few curious onlookers, recognising a motorcycle frame, asked what machine it was intended for. If the frame sparks this much interest, imagine what the finished bike is going to do. 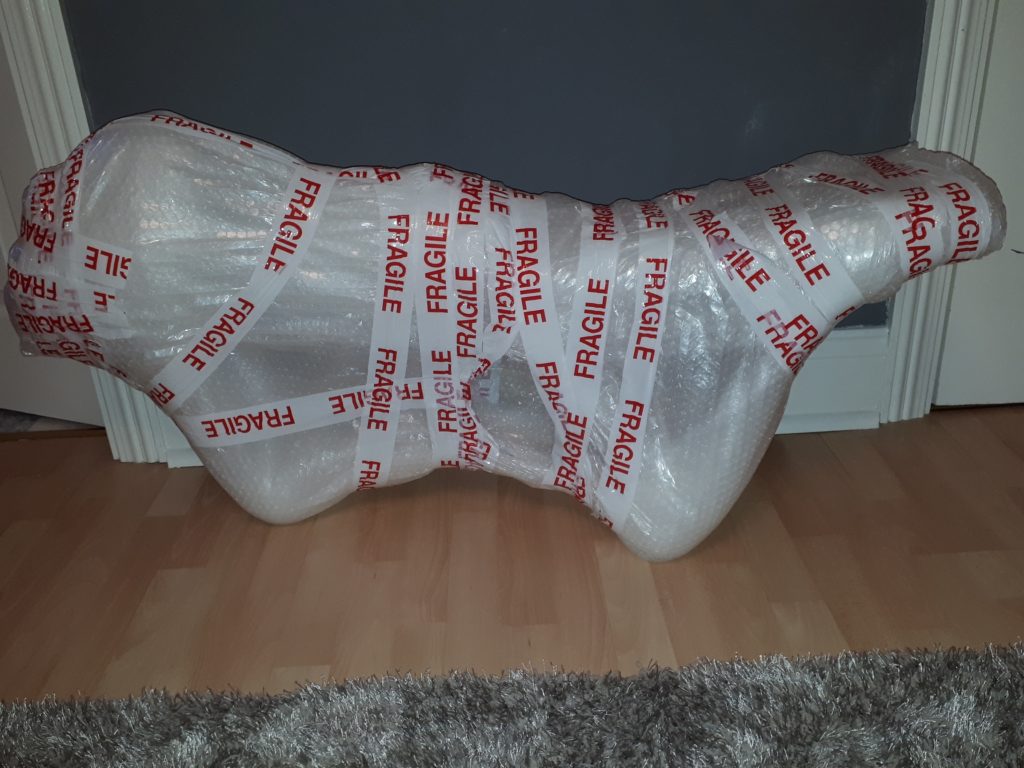 The frame is packed and ready for the long journey to Australia.

A week later, after an exhausting, 24 hour, non-stop journey from the Isle of Man to Busselton, Western Australia, we finally arrived home. I went straight out into the shed and tried my frame against one of the T150 bottom ends I have stashed there and, guess what, she fits.

So now I have my frame and my T150 donor bike, there’s one small problem. I can’t possibly separate the engine from this bike. This is a matching number, time-capsule from 1974, parting it out is not an option. Phil Irving, the Australian engineer responsible for designing the Vincent V-twin engine, in his 1992 Autobiography wrote, “there were those (including myself) who considered that every new Egli meant one less Vincent (1992, p.514).”  I have no doubt many fans of the Triumph T150 would feel the same way. Sure I’ll take the odd part from the T150 but, when this project is done and dusted, that T150 will be the next machine to undergo a full restoration, to be brought back to its former glory. In the meantime: does anyone have a spare T150 engine they don’t need?

Up until now, this bike has been referred to as a ‘donor,’ insofar as the engine was intended as a base for the project. Having now secured the bike and moved it to our shed, this matching number survivor machine is too good to part out for a special and will eventually be returned to the road in original trim.

Despite the rust and dust, this motorcycle has had very little use. It was last registered in Ohio in 1981 and represents a true ‘barn-find.’