This piece has been a long time coming.  It is 20 months since I wrote the part IV and well over two years since I first introduced the project.  I could come up with a host of reasons why it’s taken me so long to write this but I feel it’s because I don’t want the story to end.  The restoration of the little Norton has evoked emotions in me of both pleasure and pain.  The pleasurable moments were shared as the motorcycle took form and came back together.  The painful was the hideous disease that had robbed Chris of the ability to carry out the restoration himself and would ultimately rob him of his life.

Chris was already quite ill before I was tasked with managing the restoration, I say ‘manage’ because my job was to bring together, coordinate and work with the various experts who contributed to the restoration.  During my brief times with Chris, I occasionally had a glimpse of the man that was so popular and loved by so many.  As one who dabbles in mechanics and holds a strong interest in modern and classical engineering, I am impressed when I meet people who excel in these fields.  Chris was one of these people, his field was electrical engineering.  Unlike mechanical engineering, electrical engineering holds an esoteric, almost intangible commodity in the invisible force it possesses. Let me have a clumsy go at describing the nexus between nature, physics and engineering, with a touch of the metaphysical thrown in.

Greek mythology asserts before creation there was chaos.  Without electromagnetism chaos would continue to reign.  Our very presence on this earth if only possible because of electromagnetism, it holds us together and our planet together.  Think of the Taoist Yin Yang symbol which illustrates perfectly the positive and negative forces that are responsible for our collective being.  More than just electricity, we can use ancient Taoist principles to demonstrate engineering of strong/weak, hard/soft, heavy/light.  Engineers of today still grapple with these principles when designing the machines that we live with each day, motorcycles being a perfect example.  The Buz Norton is strong, hard and heavy yet it comes with an inherent fragility of fatigue over time.  This is what makes riding restoring and riding classic motorcycles so appealing.  Every ride is an adventure, arriving home at the end of the day with the motorcycle still running is a triumph of man over machine.

What we have attempted to do with the restoration of the little Norton is preserve the engineering of the fifties.  We rely upon the skills of the original designers and trust in their choices when meeting the challenges of functionality, economy and technology.  We have taken the motorcycle to irreducible pieces and examined each piece, deciding whether it stays or goes.  Experience tells us what can stay and what can go.  Luck tells us that we occasionally make mistakes in these choices and the machine will occasionally fail.  Without constant attention failure is inevitable.  And that’s where your humble narrator comes in.

I have made some tremendous friendships since embarking on the restoration of Buz Norton and, if that little motorcycle is to remain fresh and mobile, it will take regular maintenance and fettle.  I look forward to maintaining the friendships with equal joy that I do in maintaining the motorcycle.  For now, the bike runs quite well and will head down the road in fine style, however, the inherent fragility is up around the bend.  We just don’t know which bend.

Sadly, Chris passed away soon after restoration of his motorcycle was commenced by us.

Some of the experts involved in the restoration of Buz Norton. 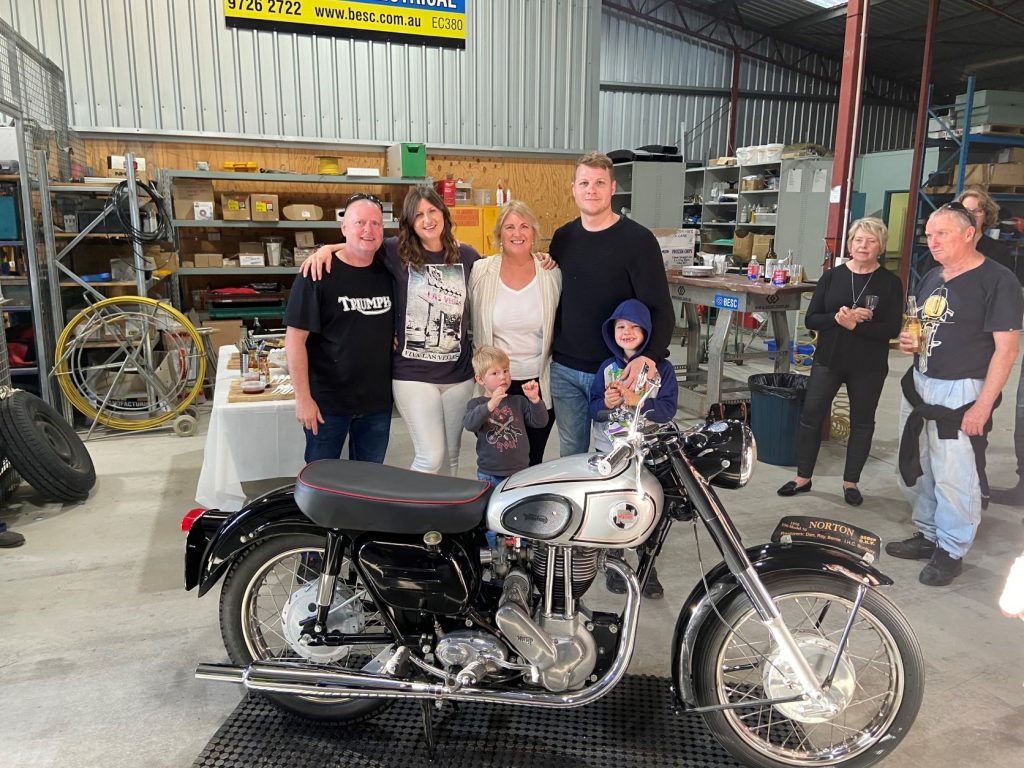 Three generations of the Busby family stand with their motorcycle. 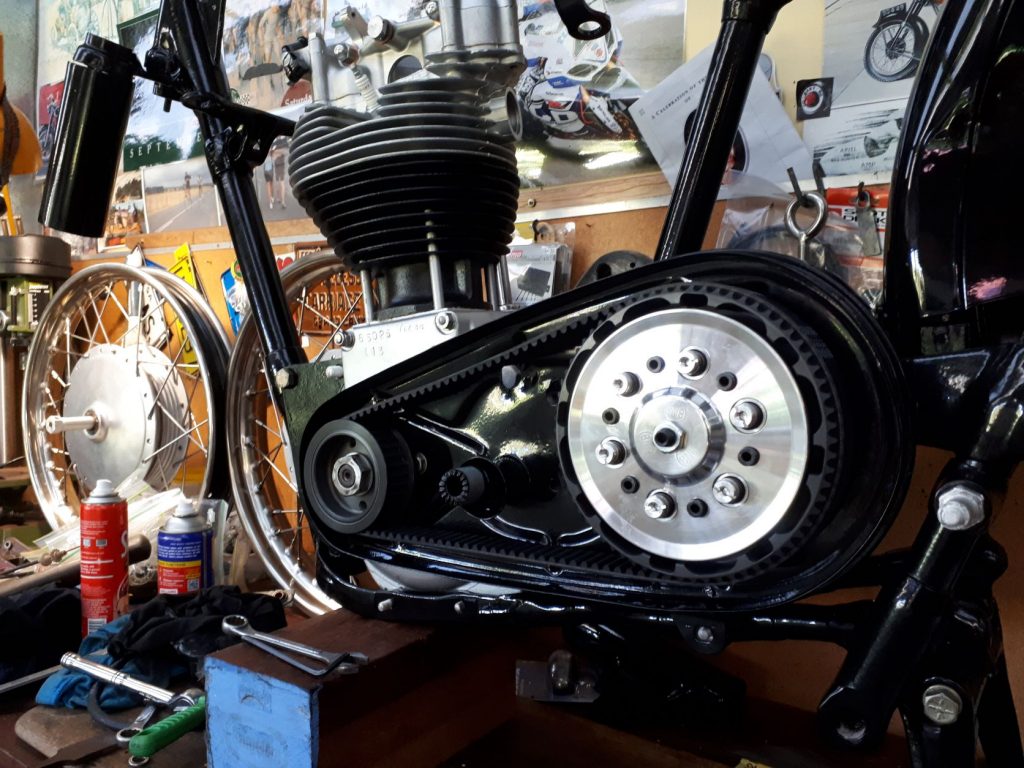 Something old, something new. A modern Newby belt drive saved the Busby family a few dollars and will last for many miles. Best of all, there’s no oil to leak out of the tin primary chain case cover. 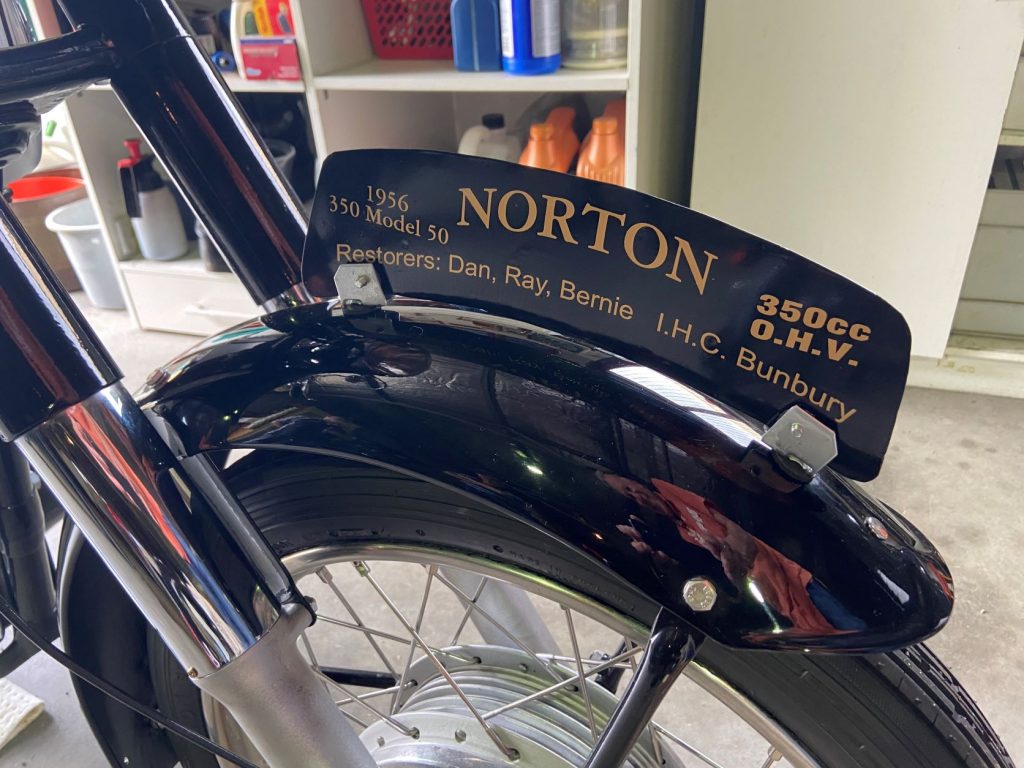 Restorers Dan Talbot, Ray Buck and Bernie McCormack and other members of the Indian Harley Club of Bunbury, Western Australia.

Family and friends of Chris Busby celebrate the completion of the Norton restoration in October 2020.