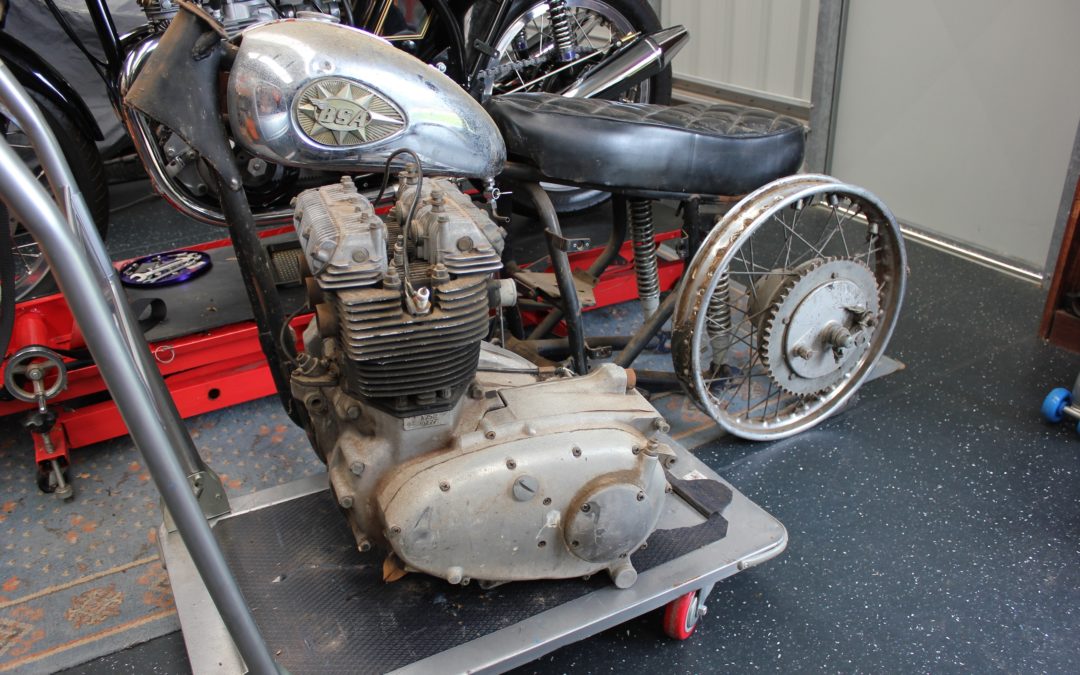 Things are moving slowly forward with the Rocket rebuild. Since we last discussed this project I’ve received a few bits and pieces back and suffered a bit of a shock where I was least expecting it. Let’s look and the shiny new bits first.

Having reduced the motorcycle to indivisible parts, the crank cases were the first items that came in for treatment and went off to Perth for a vapour blast and other tasks that needed to be done ahead of re-assembly.  The main bearings were fitted and the lower oil-way return was enlarged to the later model, T160 specs, which is a common modification on the T150 engines and, of course, A75 engines of the same vintage. The result is a thing of beauty and was proudly mounted on the engine stand, befitting a masterpiece in the Guggenheim museum, as soon as I got home. I can’t bear the idea of marking them so the cases spend most of the time under cover. 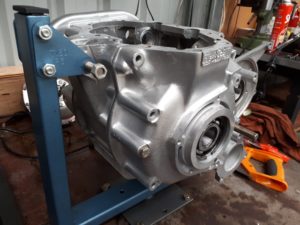 Fresh from vapour blasting, the cases look as good as new – better even.

At the time of taking the remaining engine alloy pieces to Perth, my usual source in Malaga was closed so I opted for another fellow who does vapour blasting in Morley and comes highly recommended. Dropping all these items off, and knowing there’s still more at home, it becomes immediately apparent just how many alloy castings make up the BSA/Trident engine. The items left at home are pieces that I will be polishing on my buffing wheel so there’s no need to waste money having them vapour blasted first.

At this point it is worth mentioning vapour blasting is not just water, it’s more of a slurry with a super-fine medium. The result is a sparkling surface that doesn’t mark easily when touched with grubby fingers. The reason for this is the medium that is used. Sand and soda will leave alloy rough and porous, whereas vapour tends to knock out the rough leaving the surface less susceptible to staining, apparently. We’ll see.

There is significant sludge left in the journals and threads that will need to be thoroughly cleaned out before the engine goes back together but, for now, I’m content to just ogle my beautiful new engine cases without spilling sludge down the sides of it. 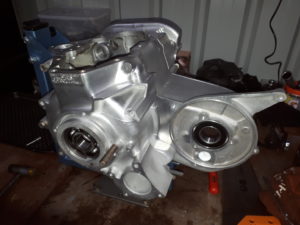 Fit for display in the Guggenheim.

When I purchased the engine I was told it had been re-bored at some earlier time and not run since. ‘Bewdy,’ I thought, ‘that’ll save a few bob!’ Sure enough, when I lifted the head I was treated to shiny new pistons staring back at me. True to the description the engine had indeed been re-bored to .020” oversize (evidently they don’t do .010” increments). Great, new pistons, new valves, new bore, huge savings.

I wanted to make sure the rings were alright so took the barrel, pistons and rings to Ben, aka the British Bike Brains Trust. Ben cast an appraising eye over the bore and simply said “that’ll need to be redone.” My guts sank a little, and maybe a tiny bit of bile started to make is way upwards. Okay, that’s an over re-action but I wasn’t expecting it. The problem being, because the engine sat for so long with the pistons in fixed positions, the bore was slightly rusty at the points where the rings were resting, resulting in an achilles heel that would flog out quickly and necessitate a re-bore at a future, more inconvenient time.

I handed them over to Ben with the instruction to do what’s necessary to ensure reliability and longevity once the Rocket is back together. 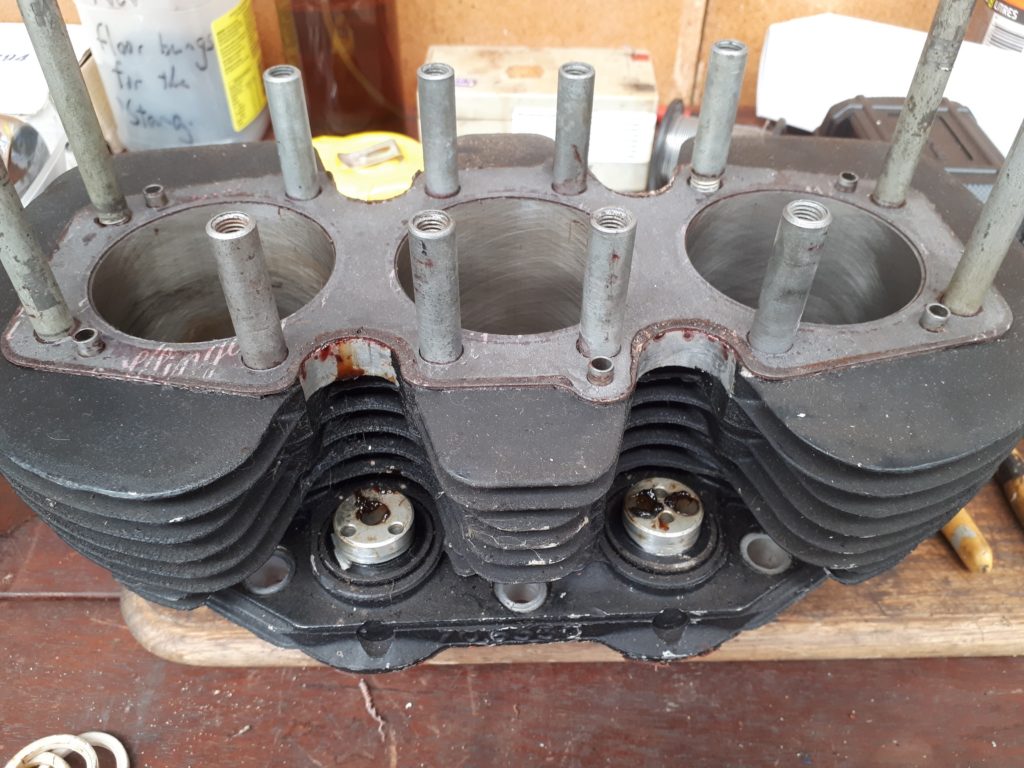 The barrels before clean and blasting. Note the rust in the bores – rendering them in need of replacing.

The plan is to keep my new pistons and replace the cylinder linings.  There is a slight cost saving in going down this route but I’m relying on modern materials and machining to leave me with better quality barrels.  There will also be some extra meat for grinding away should a catastrophe of some kind befall the Rocket in the future.

I haven’t even shown the head to Ben but I will do so in time. I did produce my shiny new valves that had been removed from the head a few days earlier, only to learn they are of the sub-standard variety and will likely drop down onto a piston after a few thousand kilometres service (oh well, into the bin with those too). 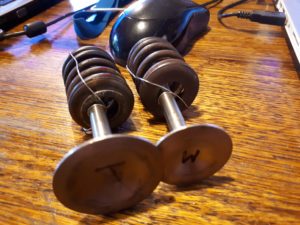 These shiny, new valves aren’t the first choice in BSA triple rebuilds so will likely be passed up in favour of high quality items. 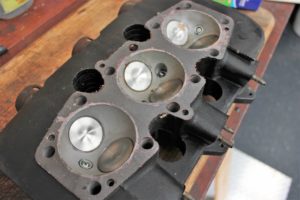 This is what I saw when the head was removed. Clean, new ready to go. Or not.

The plan at the moment is to work our way up from the bottom end, dealing with work in small, bite-size chunks of dollars, rather than a huge bill at the end of the build that would see that not so tiny bit of bile burst forth from my lips. 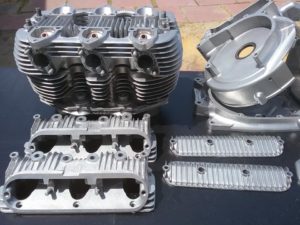 Top end after a clean up. 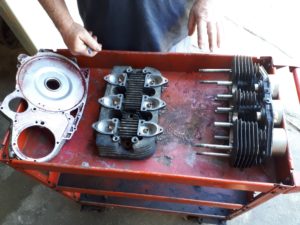 Top end alloy pieces before a clean up. Note the thick black crinkle-paint that was popular in the seventies and eights. 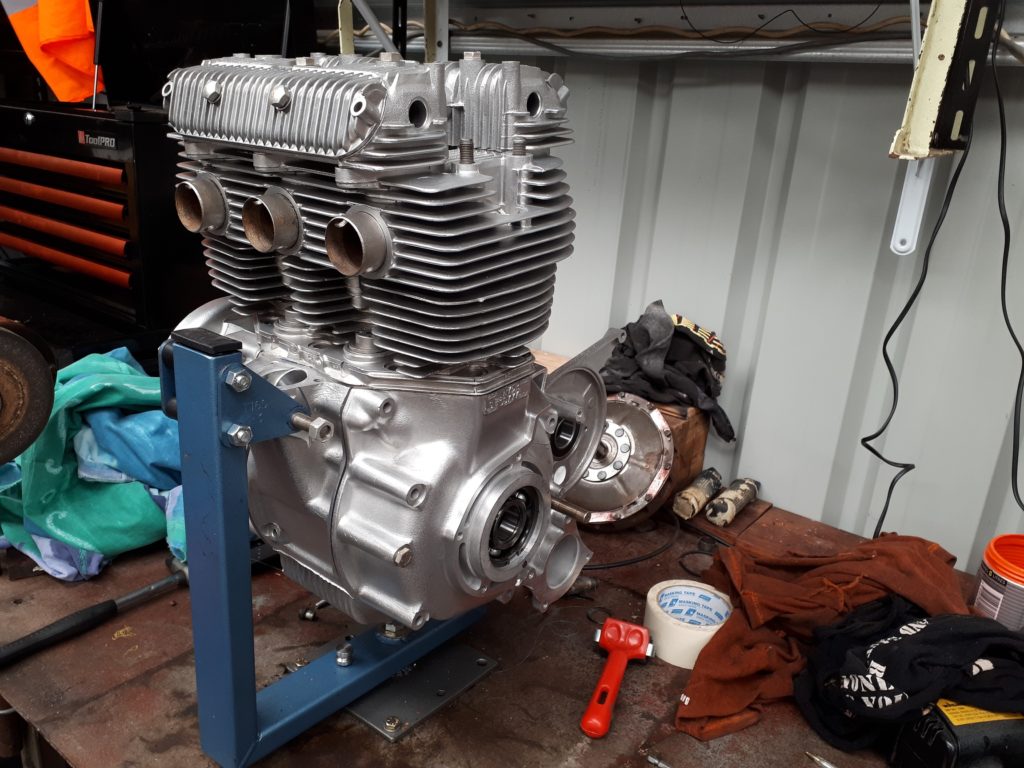